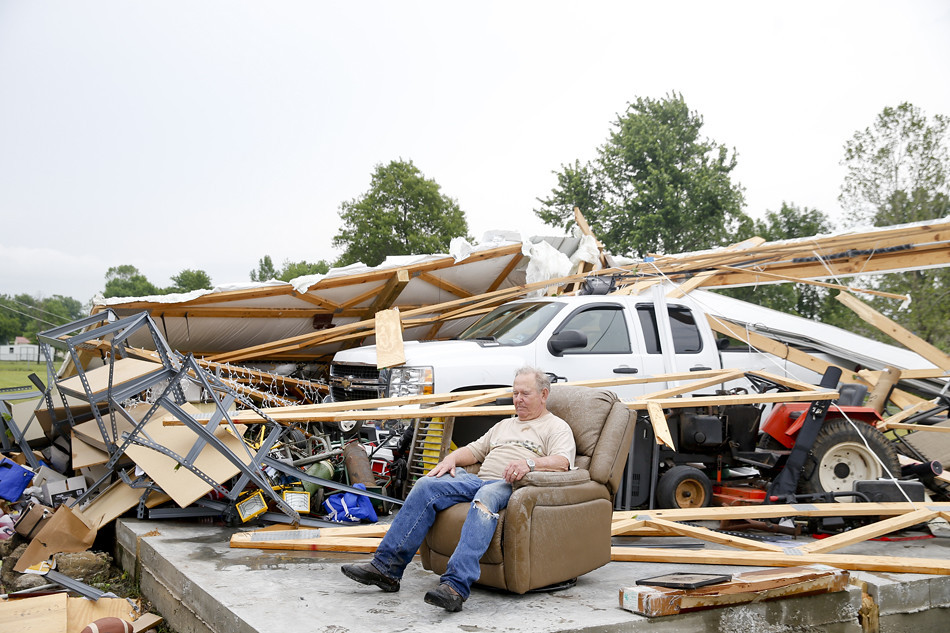 TID:
Thanks for being open to this, Ian. This is a tough photograph from an intense situation. Can you tell us some about the backstory?
IAN:
I would first like to say thank you for having me on the blog again and the amount of work you put into to keep it going. I was in the office editing some work and doing office things, when my boss said that there was a storm pattern that might cause tornados around a town we cover called Claremore, and I should go check it out.
Storm coverage is weird in Oklahoma, because they can just pop up out of nowhere. What you think is going to be a thunderstorm, can turn into something major, or could be happening in another county over from where you originally thought.
So that's what happened here, I was driving to Claremore when my boss John Clanton, awesome editor and big Star Wars, horror movie and Twin Peaks fan, called and told me that they had reports of damage in Owasso, a closer town we cover. So I coordinated our reporter there where the damage was and met him there. I quickly found out no tornados touched down but something called a microburst, which I had never heard of, but is a small intense storm lasting between 10 to 20 minutes. 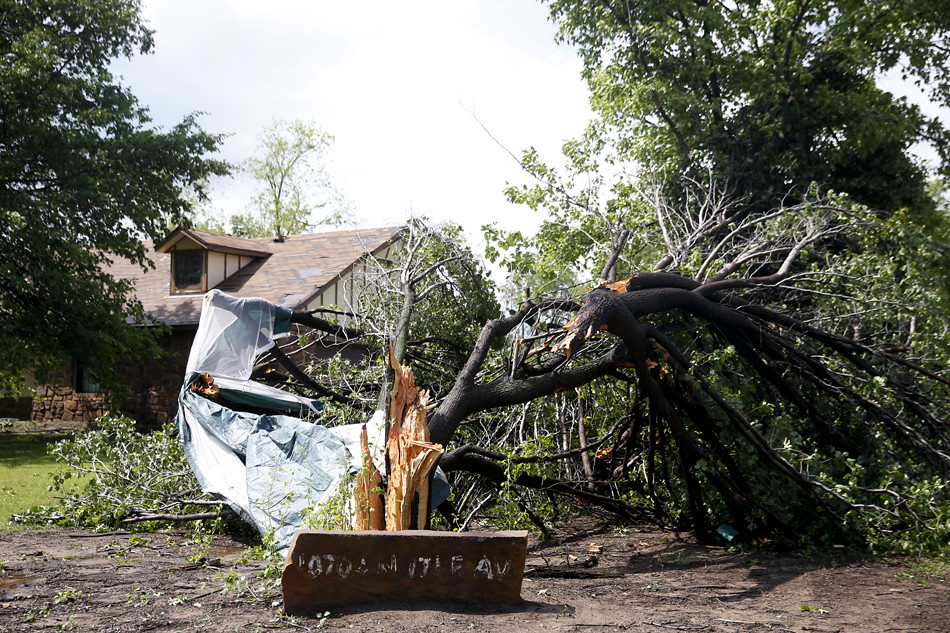 TID:
Can you talk about what it was like when you first arrived, and what you were thinking?
IAN:
The first thing I thought was just how sporadic the damage was. There were houses with crushed garage doors and some noticeable damage, and then their neighbors just had some branches in their yard. It also wasn’t that serious of a storm compared to what can happen here in Oklahoma.
People were out in their yards cleaning up debris and checking on neighbors. I also had to make sure I got stuff in quick, because storms are something that readers are interested in. So after quick shooting to get a couple photos in for the website, and did a Facebook live, which is something new to me but this is the way journalism is operating.
TID:
This is a delicate situation. Can you talk a little more about it? 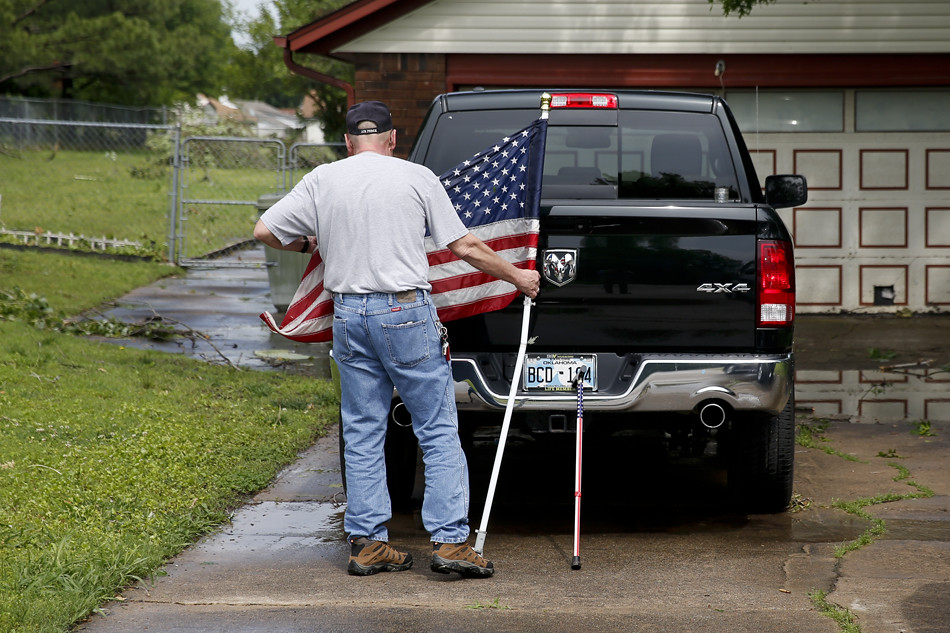 IAN:
The guy in the photo is Bob McKee, and I noticed the damage to his backyard when I first drove in, but saw a lot of response vehicles and news trucks. I took a risk and said I'm gonna wait until things cool down to go back there. I went around tho other houses of the neighborhood and this woman said there was a house with the shed blown away. I mentioned my curiosity and said he was just down the block.  So I walked over and was shocked about relaxed everything was. The only questions the emergency response team had what kind of cameras I had.   So I read the mood and realized that this didn’t seem as serious as the photo would dictate.
I saw Bob by his house and saw he was smiling and laughing with a TV reporter, and saw ok he seems in a good move.  I went up to Bob and introduced myself, and then made the joke “Beautiful weather today?” and Bob laughed. I think that broke the ice. Now, I don’t recommend that you go into every situation and crack jokes, but this was a good lesson of reading the mood of the situation. If I went up to him and was overly somber about the event, I think Bob would have been a little turned off, because he was in a fairly decent mood. Everything he had was insured and he was in the state of mind of this are just things and no one got hurt.
TID:
I’m sure you encountered some problems. Can you talk about what you faced and how you worked through them? 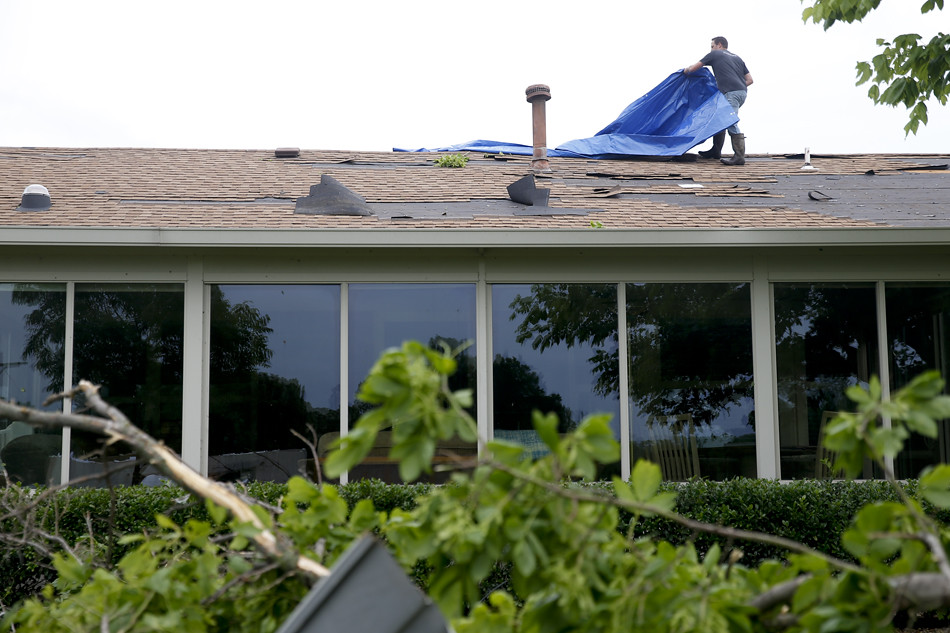 IAN:
The biggest problem on this assignment was seeing a scene, and knew I had a deadline. So, with this being a smaller storm, it wasn’t huge news for our paper.  I had to cover a soccer game back in Tulsa, Owasso is about 25 mins from the city, and I knew I had to get back to that. Doing a lot of the other things like getting slideshow photos, and doing Facebook live out of the way, let me have let me focus on a moment and let me get to know Bob.
I have been a full-time staffer for about two years now, and getting all of your bases covered early in an assignment has been such a key lesson. Everyone complains, including myself, about the Swiss army style of journalism where we have to get video, slideshows, Facebook live and get it done in a timely manner, but that is part of my job. Talking to my boss has helped out a lot. So John, the Twin Peaks fan from earlier, knows that I like taking stills more than video, so I will talk to him about assignments and we make a plan. Communication with your bosses, and all sections of the newsroom has always paid off. I try to talk to almost every reporter in our newsroom at least once a week just to say hey. It has helped build relationships so that when a story is forming they are more likely to include photo earlier in the process.
TID:
What have you learned about yourself from covering events like this?
IAN:
Humor can be a really good entry point into a story. A lot of people aren’t fond of journalists right now. Hey Trump - I really can’t hide the fact that I’m a journalist with my cameras. I’ve had a lot a people come up to me and try to size me up by asking me press pass, or be aggressive. I always try to keep things light. Oh, you want to check my credentials because I’m covering a local baseball team, you caught me I’m from the other team here to "Tanya Harding" your starting pitcher. It’s a thin line, but laughter can break tension and also makes people think of you as a person.
That being said, don’t show up to a house fire and be like, 'What's the deal with fire?" Like any tool we use, moderation and knowing when it’s appropriate to sprinkle in a joke.
TID:
Additionally, what have you learned about people in these situations?
IAN:
That they are doing a job, just like us, and they are dealing with stressors as well. If you show up with confidence and a sense of purpose, most emergency response people can read that you aren’t going to get in their way. Which is really all they care about.
Now with that being said, they are professionals and they should act in a professional way. If things escalate stay calm and record anything, even audio, so you have something.
TID:
Now, onto the moment. Can you talk about the main image, and the moments that were leading up to it? 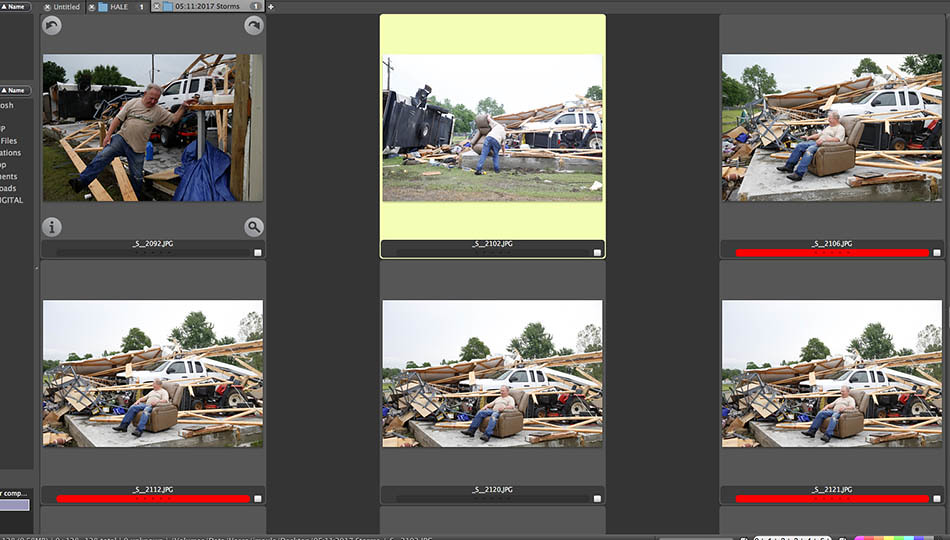 IAN:
I had talked to Bob for a bit when we started to walk out to his shed, so he could grab a hammer and nails to put a tarp over a hole in his roof. He is looking through the remains of his shed and he finds his hammer and laughs and says “Can’t find my nails.” It really blew my mind that Bob was keeping his spirits up while literally searching through what used to be his shed. So after a bit, we both realized that a chair from his RV was just sitting in his yard. I look and the chair, and back at Bob, and then back to chair and I got excited. I really wanted a photo to show the damage these storms can cause but with a twinge of humor to show everyone is ok. Bob cleaned up so debris and tried to organize the shed more and then he grabbed they chair and started moving it from the yard to the shed because he wanted his yard clean.
He starts to drag the chair over the concrete platform and I can see what the picture is going to be and just wait.  Jim Summer, who was from Bob’s church and helping him with clean up, laughed and mentioned that he should take a seat. This is a moment I really like in photographer which I love to see, which is a moment take shape. It’s like hearing a comedian tell a joke and seeing the audience get drawn in by the setup.  I know what I was waiting for and it was coming together.
Bob finally moved the chair and then sat down for about three seconds, and I was able to make the frame. He only sat for about three seconds which was all I needed but there was this sense of relief almost like everything was going to be ok.
TID:
Finally, what advice do you have for photographers covering events like this?
IAN:
You can never be too prepared. I always have a go bag packed with batteries, water, sunscreen, very important because the sun can just drain you, and other supplies ready to go just in case when something pops up. Oklahoma is right in tornado alley and storms can turn nasty very quickly so it's important that you stay prepared. Grant Hindsley, great photographer, and lover of tacos and dirt bikes covered the Joplin tornado. His advice was to just talk to people and get to know them. It's not fair to sit with a 400mm and just take pictures from a distance. If I stood far away, I never would have know that Bob had everything insured, and was in a pretty good mood. It’s very easy to put our own narratives on a story when that really isn’t the story.
I really hate covering spot news, because you are meeting someone at potentially their lowest moment. I was super lucky that this event turned into something a lot more light hearted than most spot news coverage. This profession is based on living in a lot of extremes of the human experience. A state championship celebration one day the next a house fire kills a family. It can be a lot for someone to take. Don’t feel ashamed to allow yourself to feel and seek out help. We are not machines and you are no less a journalist if you end up having to take a moment for yourself.
And for god sake call your mother. 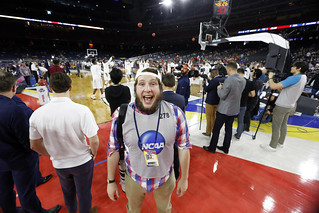 Hi. My name is Ian Maule and I’m currently a staffer at the Tulsa World in Tulsa, Oklahoma. I’m from Johnsburg, Illinois and graduated from Western Kentucky in 2014. GO TOPS. I have interned at the Kalamazoo Gazette, Fort Knox Army Base, The Reading Eagle, and The Daily Herald in Provo, Utah.  I need to thank my mother for talking me out of getting my ear peirced when I was 10 but she didn’t stop me from getting frosted tips.
You can see his website here:
http://www.ianmaule.com/