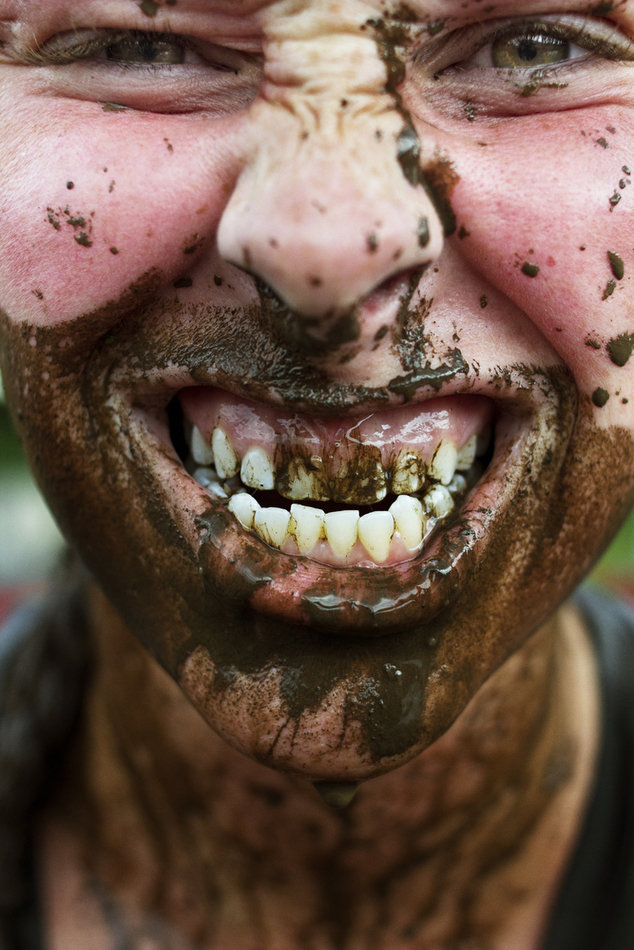 TID:
Thanks for being open to this, Zack! I’m glad we finally get to connect in an interview, especially after we’ve gotten to talk at a couple of workshops. Can you tell us a little of the backstory?
ZACK:
Ross! Always a pleasure to talk with you. I’m honored to be featured on the TID site, I’ve learned so much from reading the blog and attending the workshops, it feels great to give back!
This image was a quick post-race portrait I shot at the Warrior Dash in Mt. Morris, Michigan when I was an intern at The Flint Journal in 2013. It was a two-day event, where participants conquer a 3-mile course strewn with mud pits, climbing walls and barbed wire. The race was basically sun-up to sun-down both days, with around 26,000 runners. I probably spent 16 hours working the race, between shooting on the course and the editing at the local McDonalds (leaving a trail of mud everywhere I went).
It was exhausting, but I came out with a short photo essay that I was pretty proud of. 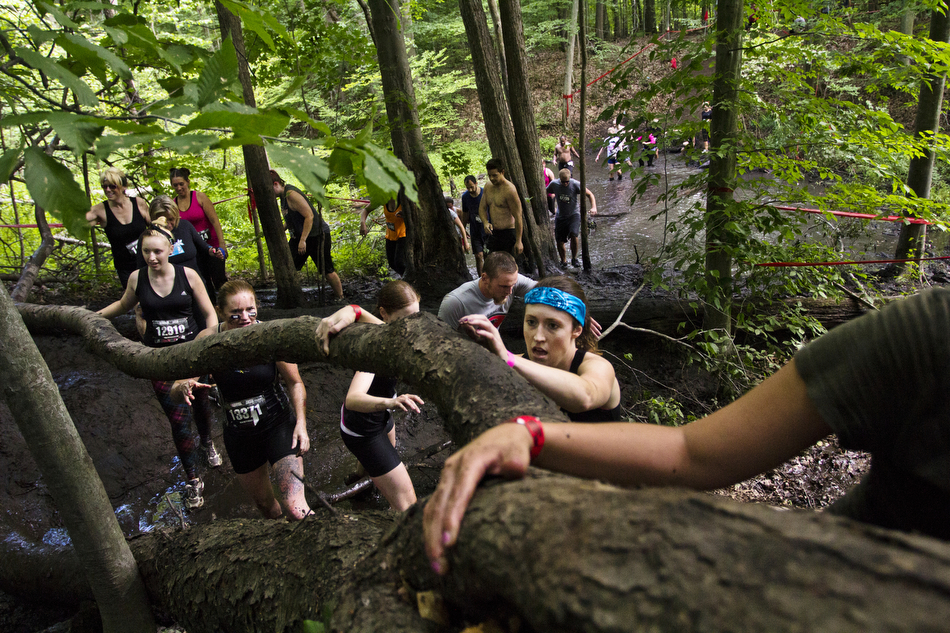 TID:
This is not an assignment that you can do without getting really messy. What type of preparation did you do going into this?
ZACK:
Yeah, messy is an understatement. I would say I over-prepared for the first day, I cellophane wrapped my camera, sealed all my cards and my lenses in ziplock bags and bought a cheap pair of sneakers that I could throw away after the day was over.
My concern for my gear ended up slowing me down and not actually protecting anything. Taking everything out of the bags was causing me to miss important photos, and my shoes kept getting sucked off my feet in the mud, holding me up even further.
So once my cards were full and I sat down to edit the first time, I ended up throwing it all away and just stripping down to the essentials… literally. 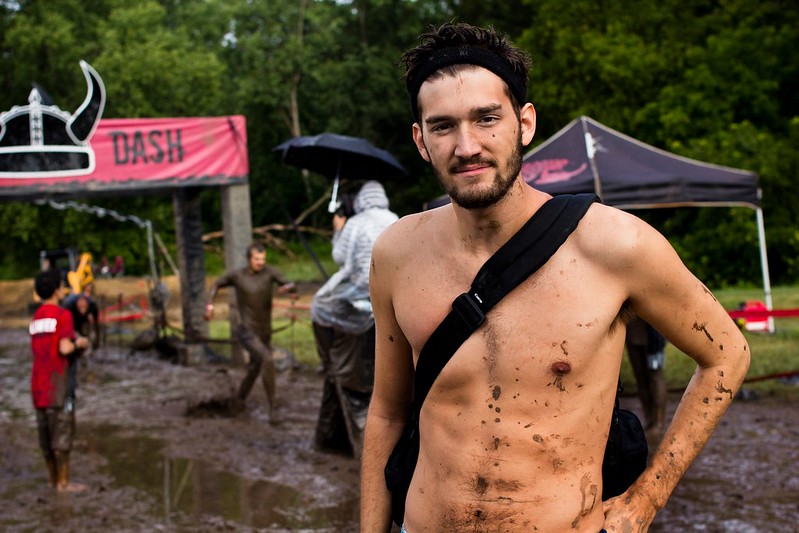 Jake May took this photo of me the first day after he finished running the race himself. I ended up just darting around barefoot and shirtless. One of the reporters said “Every time I saw Zack he was wearing less clothes than the last time I saw him."
I realized it was just mud, and they make cameras water resistant for a reason, right? I was fearful for my equipment and it was holding me back from making the photos I wanted to make.
TID:
I’m sure something went wrong, can you tell us and how you overcame them?
ZACK:
Yeah, of course. The photo staff at the journal was Jake May, Michelle Tessier and I, and none of us had ever shot Warrior Dash before, so we weren’t really sure what to expect. I was on the first shift of the weekend, so I ended up being the guinea pig. There were 12 obstacle sites along the course; climbing walls, a lake to swim across and even a pit of fire to leap over. I imagined there would be trails between each obstacle so I could easily maneuver through them, but unfortunately the event wasn’t exactly catered to outside photographers. Except for the lake, I had trek the entire course through the same path that the runners were taking. My poor physical fitness combined with the camera gear on my back made that very difficult, but I had no choice but to power through and get the photos. I almost lost my camera in swamp muck, and had to be rescued by some of the runners when I became stuck waist-deep in the bog.
I had to find the sweet spot where I wasn’t putting my equipment in danger, interfering with the runners, or blocking the view of the event photographers, while still getting photos I was proud of. It was a balancing act (sometimes quite literally), but I made it work in the end. 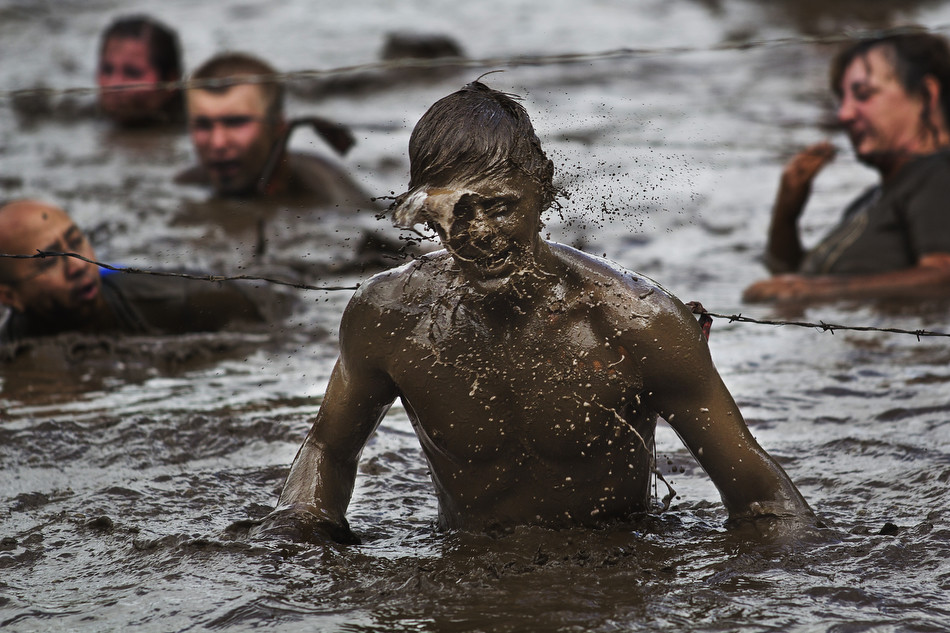 TID:
Now, onto the moment. Can you talk about the minutes leading up to the main frame, and what was going on in your mind at the same time?
ZACK:
Oh yeah. At this time, I had covered most of the basics, I had made images at all of the obstacles and had enough to fill a gallery, so I was just trying to make the pictures that I wanted to make. The final stretch of the race was several muddy pools, where runners had to swim underneath barbed wire. The water from the pools combined with the rain that fell earlier in the day made for a treacherous area around the finish line where runners would slip and fall regularly. So I parked myself there, hoping for photos of people getting a mouth-full of mud. I wasn’t really happy with the pictures I was making at my current position, and as I got up to move this girl crosses the finish line and absolutely beefs it into the mud, face first. I’m thinking, “Of course as soon as I get up to move, the picture I’ve been waiting 30 minutes for happens right in front of my face.”
The girl, Katie, is laughing as she picks herself up out of the mud, and I think to myself, “There is definitely still a photo here.” Instead of kicking myself for missing the moment I went up to her and introduced myself and asked if I could take a portrait, right as she was spitting the mud out of her mouth. She was embarrassed, but she agreed.
I moved her in front of a clean background and started making pictures. She was definitely shy, and it was coming across in the photos that she was uncomfortable. I looked up from the camera and said “Katie… this is Warrior Dash. Look like a warrior.” And she gives me this snarl that beautifully shows off the mud on her teeth. Satisfied with the photo, I let her go and apologized for making her stand there with a mouth full of mud. 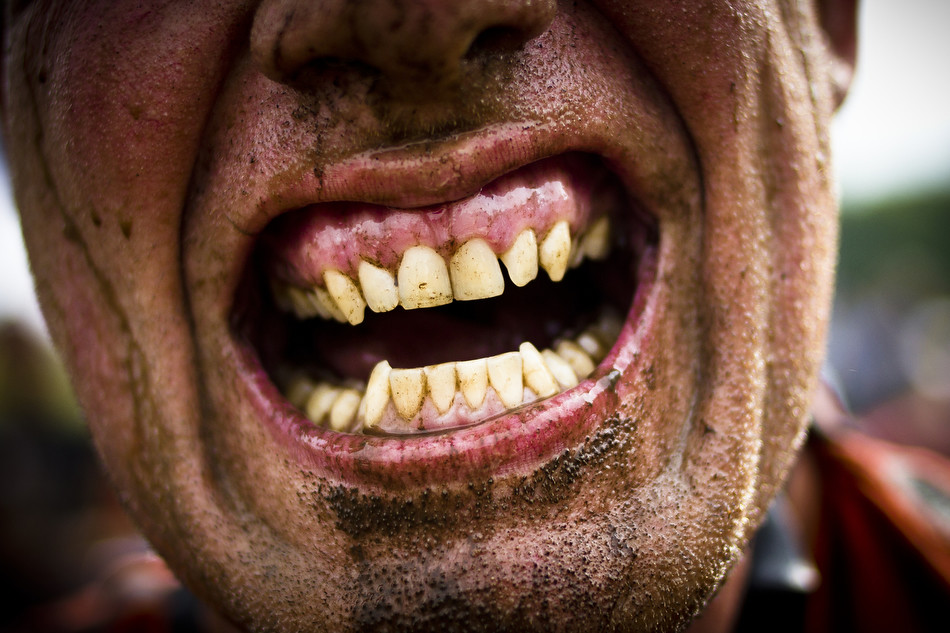 TID:
You’re a relatively young photographer, and one of the things I see often in people starting out is that they’re afraid to be very close to people when they photograph them (I used to be like this, too). How did you work to overcome this?
ZACK:
It’s a scary thing, to be that close with someone you just met. But I think it’s important to examine where that fear comes from, in order to conquer it. For me, that fear comes from my own insecurities. I’m not actually afraid of the person I’m photographing, but I’m afraid of their perception of me. “They’re going to think I’m weird if I get close.” And because I have this preconceived notion that what I'm doing is weird, it’s going to be weird. They’re going to be uncomfortable, because I think I'm being uncomfortable. It’s something that is only overcome by pushing yourself, and you’re probably going to make a lot of people feel weird in the process, but it will get easier (and less weird) the more you do it. Once you get comfortable with getting close, your subjects will be comfortable as well. 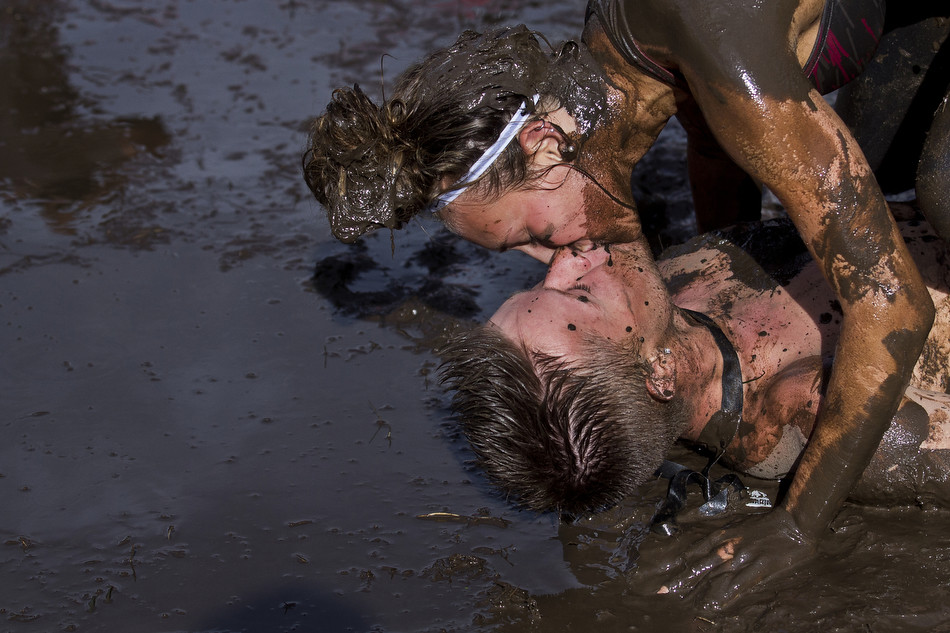 TID:
Additionally, how has your career in photojournalism impacted you so far?
ZACK:
That’s a hard question to answer, because I can barely remember who I was before I was involved in photojournalism. It really wasn’t that long ago, 5 years maybe, but it’s had such a dramatic impact on every aspect of my life I can hardly imagine myself without it. Photojournalism has made me more comfortable and less fearful. More sympathetic and less judgmental. I’m more aware of others and less inside my own head. I’ve learned so much, met so many people, and been so many places… all possible because I introduce myself as a photojournalist. It’s like my key to the world.
Right now, I’m in beautiful Tampa, Florida for six months, escaping the brutal Michigan winter and trying tot make some meaningful pictures at the Tampa Bay Times. I think it’s important to reflect how lucky we are to be in a field that allows us to have these experiences. I’m eternally grateful that I’m in a position where I’m free to explore my passions. I know there are many people, much more talented and more dedicated than me, who don’t have the same opportunities and aren’t able to break into photojournalism.
Just trying to be thankful and stay humble. 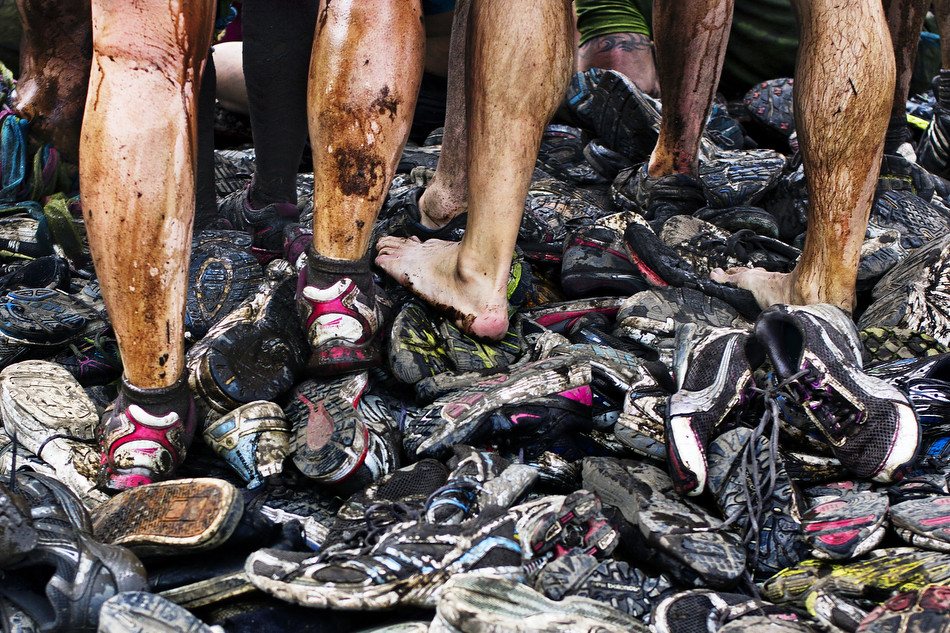 TID:
In conclusion, what advice do you have for photographers, especially those who may be just like you (just getting started)?
ZACK:
Advice… I hardly feel qualified to be doling out advice to other young photographers, about life or photojournalism. But I guess I can talk about what has helped me personally in my career. First, I think it’s really important to view your career in photojournalism not as a race, but as a journey. I know so many young photographers are feeling anxious about their career progress:
“Oh I’m 20 years old and I’ve only had one internship,” or "I’ve been shooting for 5 years and I’ve never won an award,” things like that. We, as young photographers, tend to place these expectations for ourselves. These expectations of achievement in relation to our time in the industry, and we feel guilty when we don’t meet up to these arbitrary self-made standards. For example, photographically I’ve been in a slump for the past several months, and I feel guilty about it every single day. Right now, a slump of four months feels like an eternity because I haven’t been shooting for very long. But if you look at those four months in relation to your potential 40-50 year career. It’s a bump in the road. Our current place in our young photographic journey is only a small fraction of our lifelong career, possibly lasting 50 years or more. Second, don’t compare yourself to other photographers. Ever. I think it’s important to always be looking at people’s work and learning from them. But comparing yourself and your progress to other photographers is a dangerous road to go down. Compare your current work to the work you were doing a year ago. See how much you’ve grown and hold yourself to continue growing.
Third… Try and surround yourself with people you admire. I owe so much of my short career to photo-friends, they took me under their wing when I was a fledgling camera wielder, and it’s so important to have that guidance when you’re just starting out. I can’t stress enough the importance of mentorship in this field. Successful photographers know this as well, so if you reach out to them for a critique or an edit, nine times out of ten they’ll oblige, and probably be flattered (I know I would be.) Also, engage with the photojournalism community! Attend workshops, enter contests, go to portfolio critiques. These experiences are invaluable, and the people you meet will be lifelong friends and mentors.
And finally… As a young photographer you’re going to feel unsure… pretty much all of the time. Unsure if you belong in this field, unsure if you’re good enough, unsure if you’re wasting your time. Nobody really tells us this when we're starting out, but I think it’s a pretty overarching feeling in young photojournalism. If you love taking pictures, you’ll find your direction in time.
Nobody our age knows exactly what they’re doing. But if you’re out there doing work you enjoy, you’ll figure it out. This is where you belong, I promise. 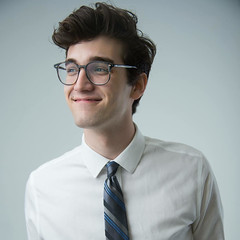 Zack Wittman is a 23 year old documentary photographer, and the current Tampa Bay Times photo intern. Zack graduated from Central Michigan University in May, 2015, and has worked at The Boston Globe, The Flint Journal and The Midland Daily News.