Spotlight on Victoria Will

TID:
Hello Victoria. Thank you for taking the time to share with us. Please tell us about the images' background, the assignment, and the overall context.

Victoria:
Thank you for asking me to participate with TID, Logan. These tintypes may change the regular format of TID a bit, but as a photographic medium, there is always something to learn. I certainly learned a ton in this process that I'm happy to share. 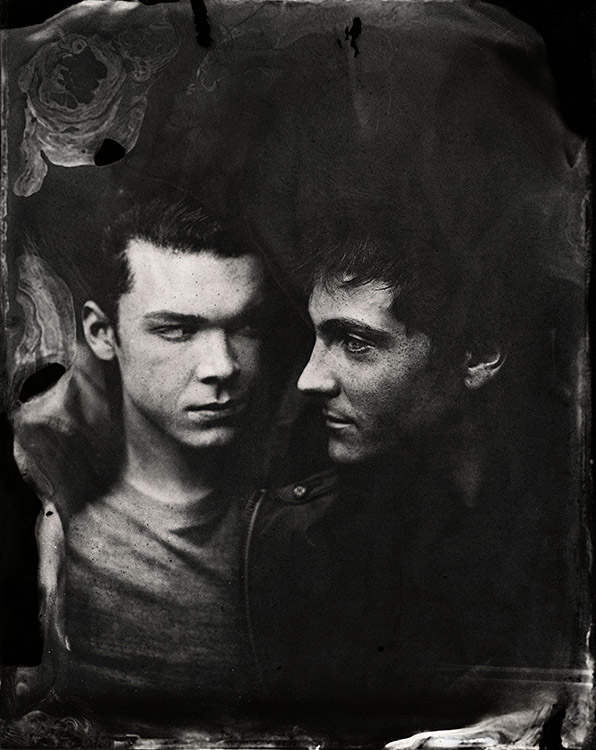 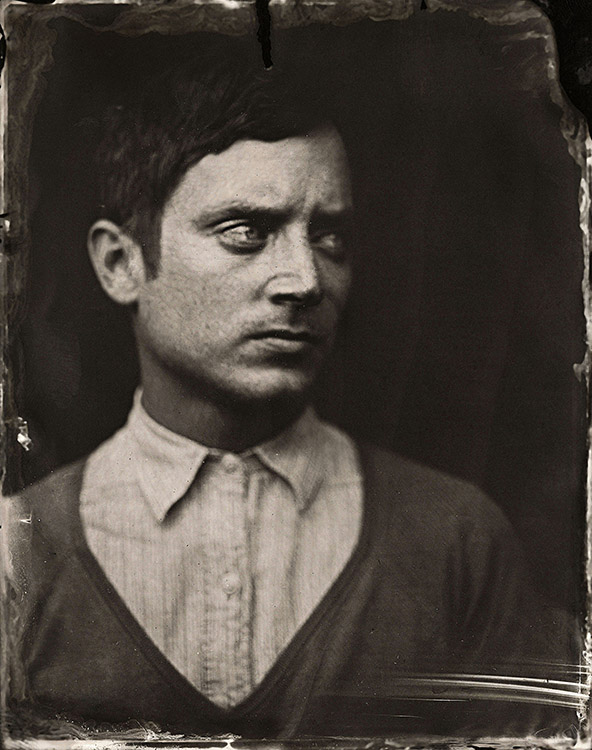 Victoria:
These images came as a side project-- a personal project I tacked onto my assignment as the digital portrait studio at the Sundance Film Festival. As my fourth year on assignment for the Associated Press, I was familiar with the pace and the intensity that goes into the week. For five days, nearly every cast that has a film or documentary in the festival comes through the studio. I am required to make group, individual, and pairing photos of cast members and directors for well over a hundred films. I've actually never counted how many; that would be almost overwhelming. This year we averaged 25 casts a day. It is an incredible amount of work, and making images is just half of it: At the end of every day, I have to process, caption and file the photos. Most days are 16 hours. It is the hardest part of my year, hands down. Nothing else compares. 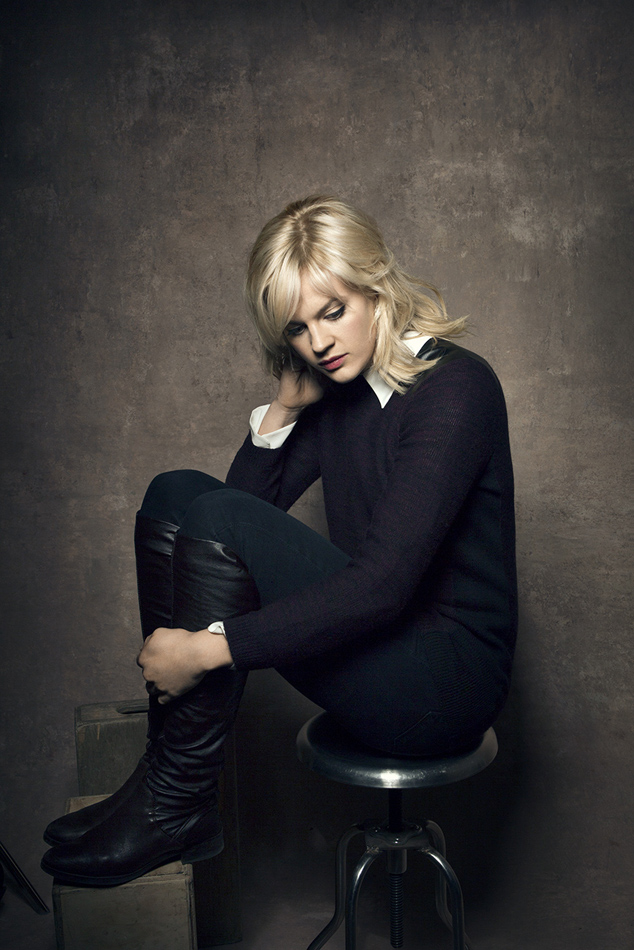 Victoria:
I've always referred to Sundance as "photo bootcamp." Every year I am amazed at how I have to push myself out of my comfort zone creatively into a place I never saw coming. Think of it like this: Half-way through the first day, you've shot 10 casts. (That could be 50+ people.) Well, after making images of 50 people the same way, it is easy to get bored visually. So I mix it up! I start changing the background, changing the light, the medium — whatever I can that will make for some interesting alternatives and that goes on for four and a half more days. This isn't a requirement of the assignment - it's an expectation I have for myself. After all, if I'm tired of what I'm looking at, chances are so are the viewers.

Each year at Sundance I have tried a new idea. The first year, I used a chalkboard for more fun interactive photos. The next year I used bright colored patterned fabrics as backgrounds for interesting images and the third year I used beautiful textured and painted canvases for more classic portraits. So for the fourth year, I was searching for something new that really inspired me. 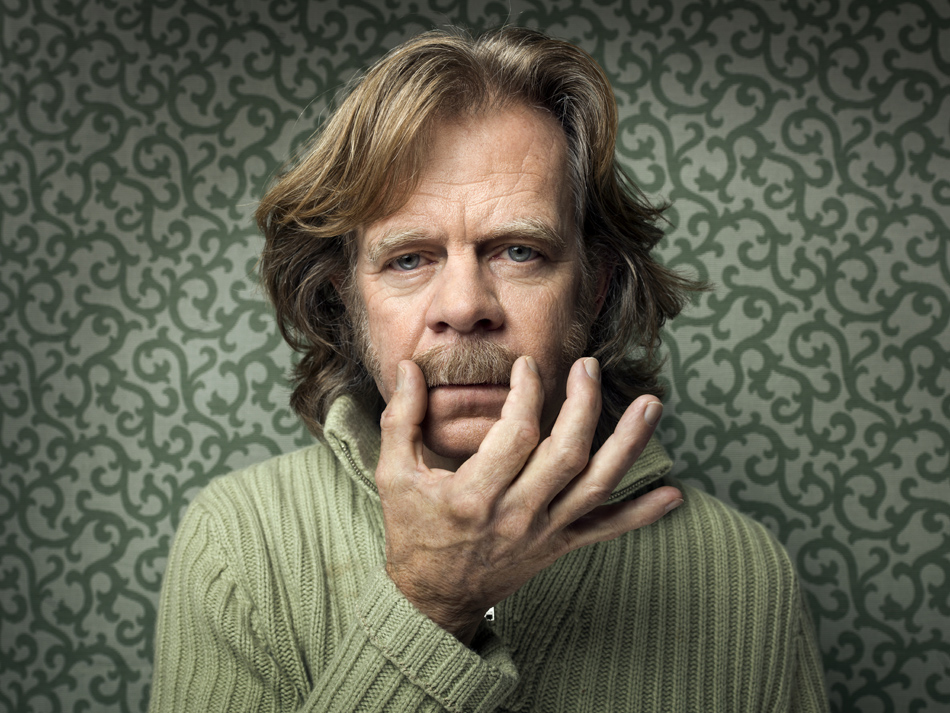 Victoria: This is what led me want to make tintypes. After the last day at Sundance 2013, I told myself that next time I was going to really have to step out of the box - metaphorically speaking - because I am trapped in a box at Sundance: My studio is a hotel room or a storage room with 4 white walls (if I'm lucky.) That's it. I hope you weren't picturing a massive white cyc somewhere in the mountains of Park City! The ceilings are low and the space is tiny. Maximizing that space is something my assistant, Taylor Jewell, and I have down to a science. Inches are precious so we've learned to use them all. 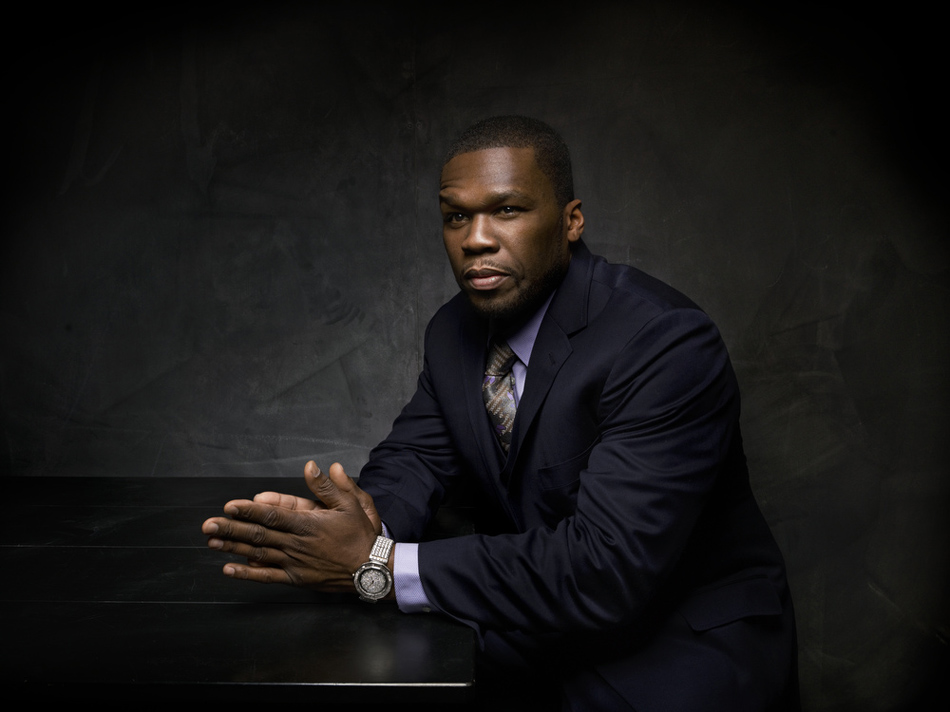 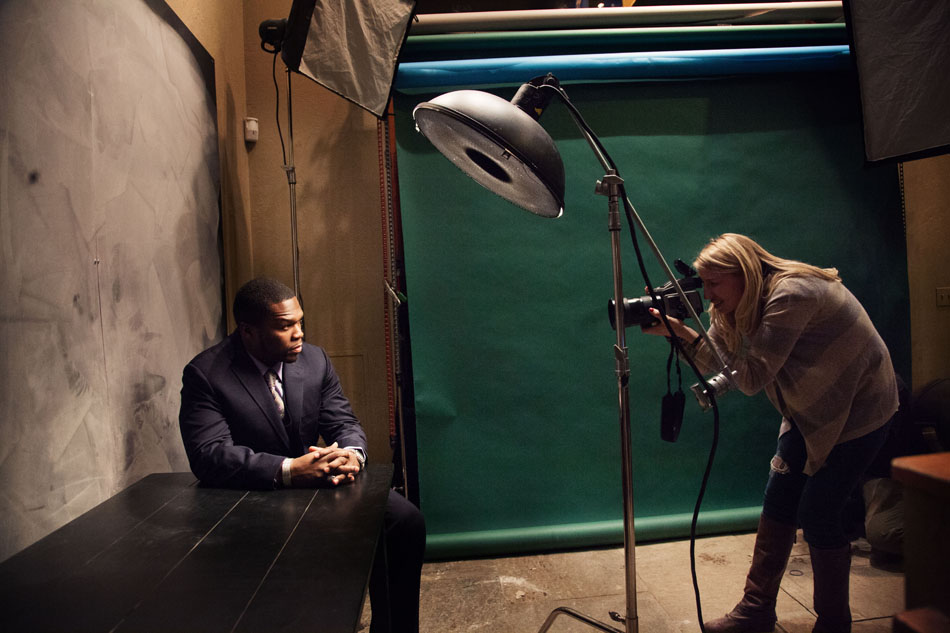 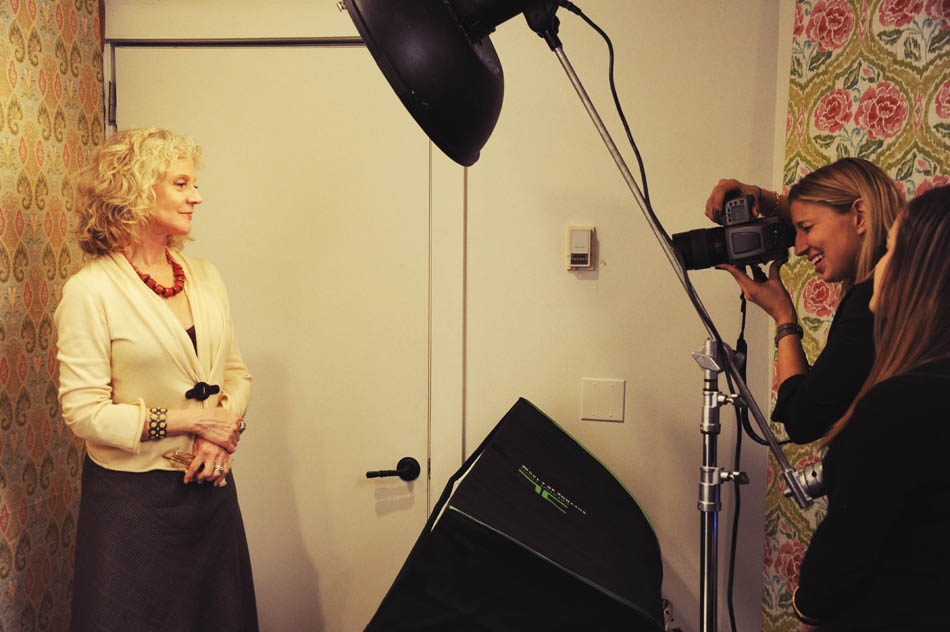 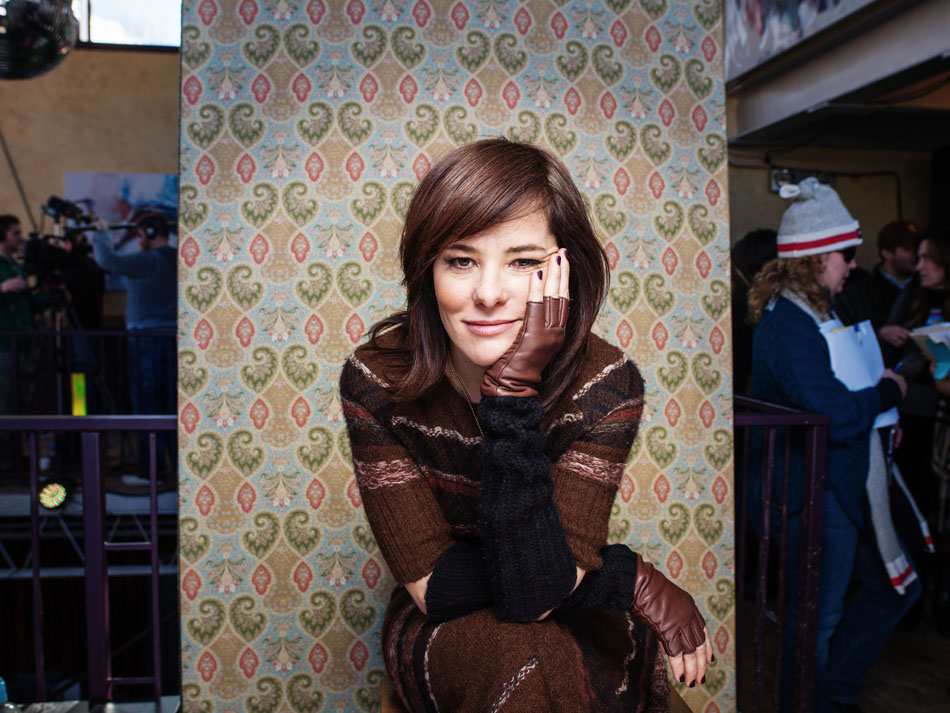 In this image above, we had to travel to a cast instead of the cast coming to my studio. We moved a few of my backdrops and shot portraits in the middle of a crowded lobby as you can see. As far as I'm concerned, you can make a nice portrait anywhere, you just have to be flexible.

Victoria:
After years shooting this, reinventing the wheel was becoming more and more difficult.
I'd held tintypes and loved them, but had never been apart of the intimacy of the process. That is what got me. I'm fascinated by the demanding process, the calculated nature of the chemistry and the beauty in each unpredictable result. There is something really special in each wet plate being one of a kind. It's incredibly honest. The tintype and its process - unlike the glossy retouched work we are currently inundated with - is raw, deliberate and undeniably true. This is also what I love about portraiture; the two compliment each other in the most dignified ways. That being said, I knew that the actors, directors, writers and artists of the festival (all creative minds) would enjoy collaborating on something different than the digital studios everyone is used to.

I suppose the reason I chose this opportunity to use the tintype process is personal: I had a very visceral reaction to having my tintype made and I wanted to bring that experience to my subjects. There is no better place to do that then at a festival attended by people who are there for the love of the arts.

That being said, I did have some participants turn me down. They weren't particularly interested in having their likeness immortalized, again, for the millionth time. Danny Glover, for example, mentioned that there were already too many images of him out there in the world, so he gracious declined. In those situations, there isn't much you can do, except be momentarily disappointed and move on - hoping that other people will see what you see in the project.

On the flip side, I also had some actors who were rushed off to other interviews, only to come back a few hours later because they wanted their chance to have one made. Those are the circumstances that are the reward for the effort - when others are noticing the results and want to participate. 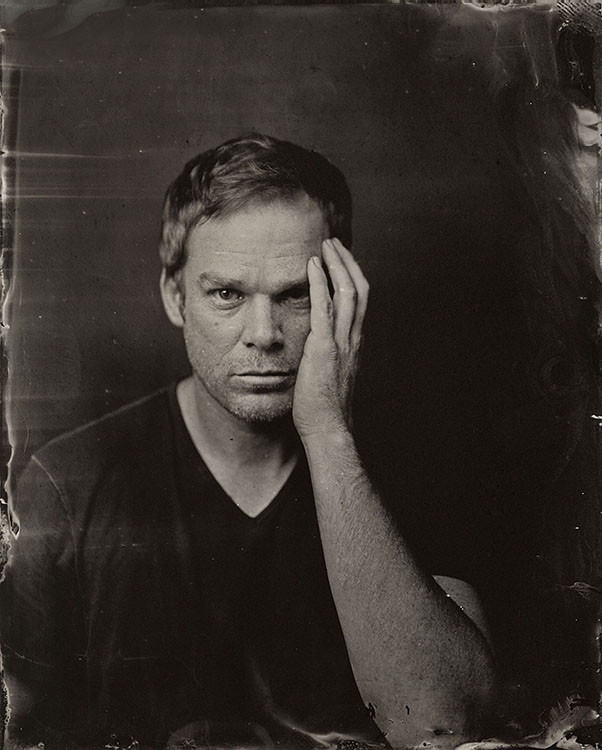 Victoria:
As each cast arrived, I would start with the digital portraits, groups, then individuals. In the back of this space was a closet where we set up the darkroom. In front of the closet, we set up our lighting and background for the tintypes. While I was shooting the digital images, one of my assistants was sensitizing the plates. 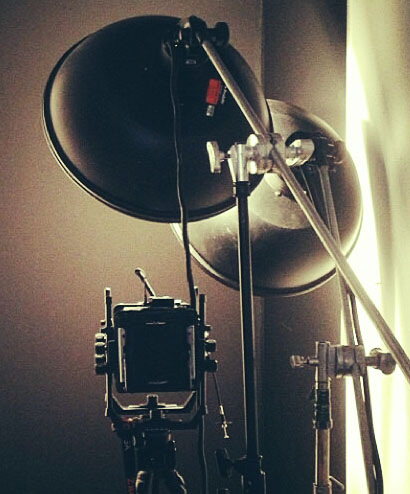 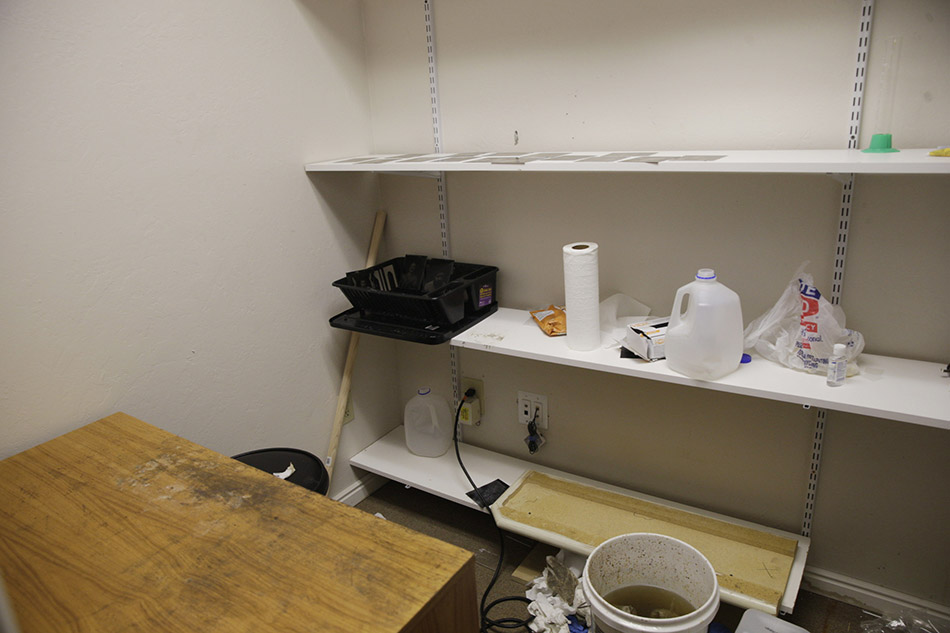 While the plates were being coated and sensitized, I was walking the cast member through what was about to happen. I would explain that it was a shallow depth of focus so we needed to pick a pose that they would feel comfortable holding and not moving from. After the digital part was done, I walked the subject to the back and set them up in the tintype area. This particular medium breeds collaboration and creativity. In most cases, the poses we arrived at were based on a conversation, each of us giving our two cents. We only got one chance to get it right for two reasons: first, because tintypes are a positive (not a negative that cannot be reproduced) and second, we were under such time constraints that there was only the opportunity to make one. 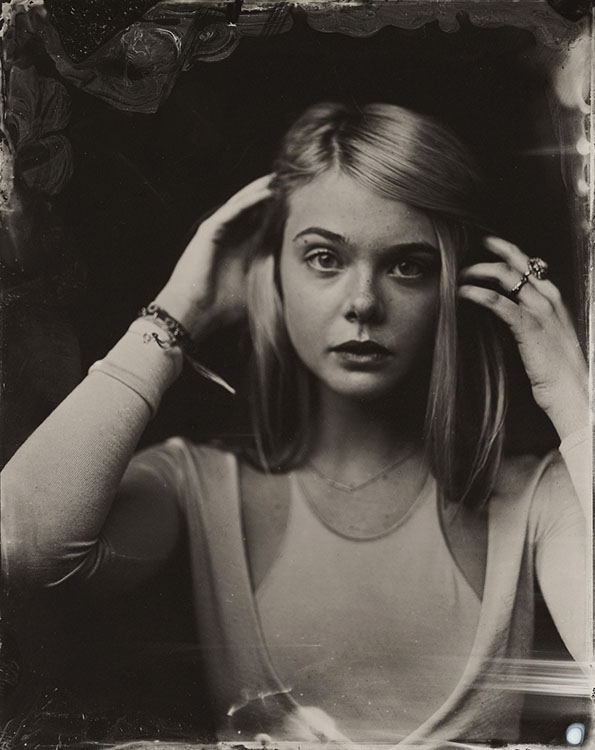 TID:
What were some problems or challenges you encountered during the coverage of this event, and how did you handle them?

Victoria:
We did make mistakes and were able to trouble-shoot around them. For example, Park City is cold and the chemicals react to extreme temperatures. We initially intended to make the darkroom in a tent outside our space so it wouldn't take away from our already tight studio setup. It turned out that the developer was too cold and needed to be warmed up to function properly.

With only the one chance to make a portrait of each subject, I really had to slow down and be very deliberate with my choices. Overall, we made 100 or so plates. Imagine spending 5 days to shoot 100 images. In the digital world, that just doesn't happen. Choosing the tintype made me have to be more prepared than ever. It was high risk, high reward.

And there were some plates that didn't turn out well for a number of reasons, either the chemistry was off, the subject had moved out of the light so therefore theplate was underexposed or various unforeseen issues. But you learn from the mistakes and move on. There isn't time to sit and be disappointed. 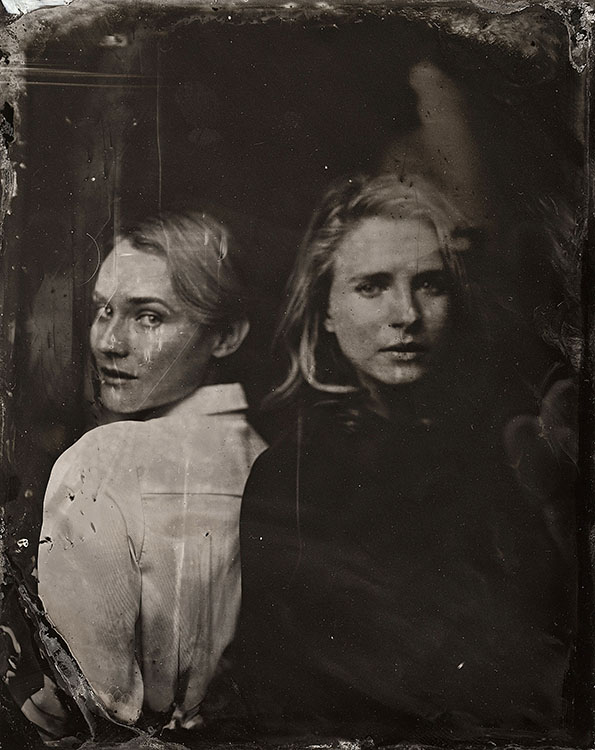 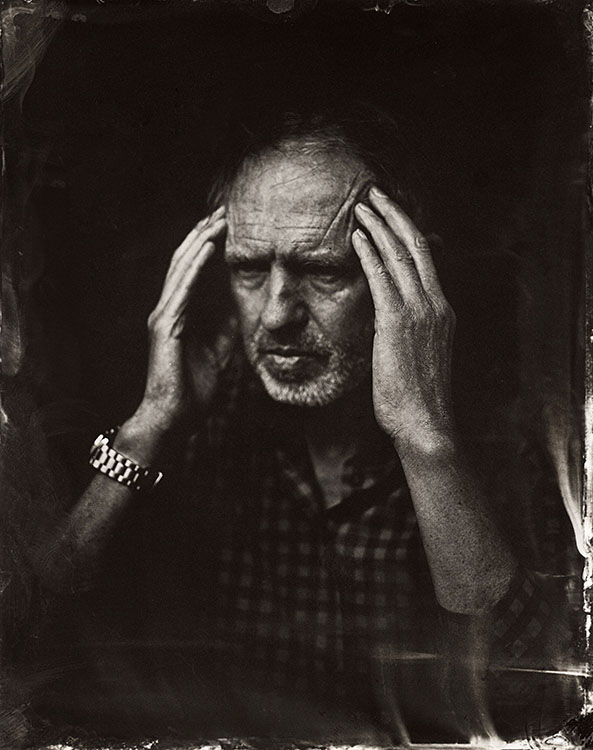 Victoria:
With each image, I would take what I had done previously and build on it further - the same way I pushed my ideas at Sundance from year to year. The creative mindset is the same. You are only going to evolve as an artist if you keep pushing your comfort level. I moved the camera around to vary the portrait poses and really had to be articulate in explaining what I wanted to achieve. Chances are if I didn't get what I wanted, it was because I didn't ask.

TID:
Was there anything that you learned or put to use in later assignments that come about from this experience?

Victoria:
Of course! On a technical level, I now use several of the lighting technique I used there in my traditional portrait work. I tried a few set ups that I hadn't tried before and really liked the results. But on deeper level, I realized that if you are shooting the same "safe" thing every time, you aren't expanding your skill set. Try something new. Keep working at it until you get it and then move on again. 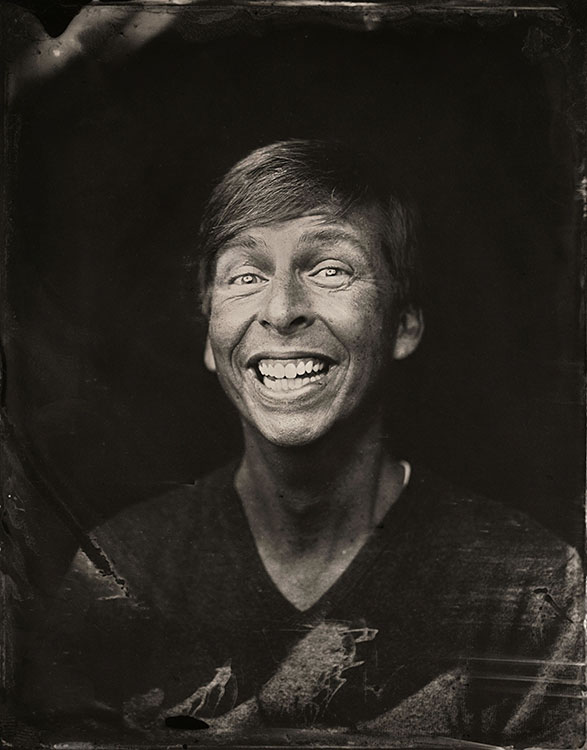 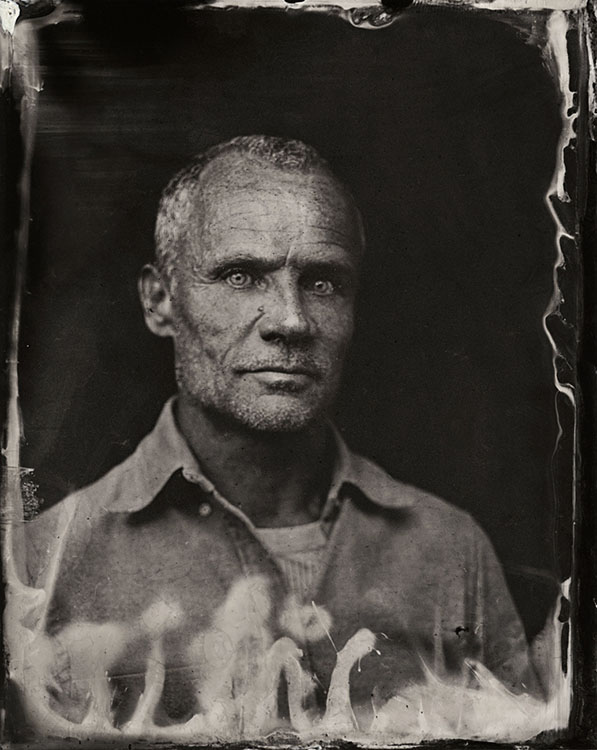 I find this works to help anyone get out of a rut. It may be the same assignment, but why does it have to look like it? There are a million ways to try something new in the same situation --  different lighting, or a new lens, or a different camera. Maybe it is how you talk with your subject. Instead of directing them, maybe you talk the process through with them, having the shoot be more of a collaboration. Whatever it is, try it. If you are taking really strong images every time you go shoot, you aren't stepping out of your comfort zone - without that you aren't growing.

That's really what I was thinking when I decided to do tintypes this past year.  When it was all said an done, what a great feeling to have accomplished such difficult task and survived — learning all along as you go.

Victoria Will began her career at the New York Post where she was a staff photographer. In a news environment responsible for headlines like "Headless Body in Topless Bar," Victoria honed her skills and her sense of humor. With a focus on commercial and editorial portraiture, her photographs appear on newswires and in newspapers and magazines worldwide, from the Associated Press to W magazine, The New York Times to Vogue. A graduate from Princeton University, she hails from Washington, D.C., but now resides in New York with her two French Bulldogs and photojournalist husband. 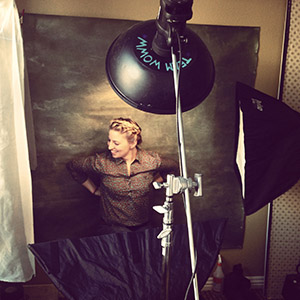