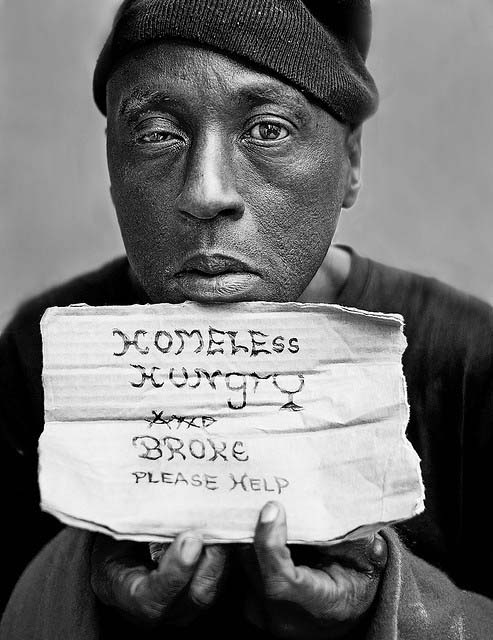 TID:
This is from this project “Nobodies.” Can you tell us a little more about your project and what it means?
SHELDON:
I'm diverse as a photographer. I photograph just about anything, but my first love is the street and the portraits that challenge me to the core of my being. It's where the rubber meets the road for me.
I began editing my work, sorting through pictures, trying to identify some common themes. My intention was to edit down 7 years of work. As I moved forward, I starting noticing pairs of photographs, both in my portraiture and candid work. The number of possible pairings seemed infinite, but after some time I was able to identify several hundred pairs. I had the makings for a book, but no idea as to how to proceed. The title just popped into my head. Once I came up with the title, "nobodies" seemed to put itself together. In fact, I didn't much change the order of the original pairings, only played a game of elimination.
All the photographs are of strangers, from all walks of life, taken at different times and different places. The faces and scenes seemed so familiar to me, like a long lost family album. These were no longer pictures of strangers, but old friends. The pairings worked individually and as a collection. With little effort, or so it seems, these images fit together almost seamlessly.
TID:
You mentioned, “A publisher that I had met expressed an interest in my work. It never worked out and feeling rejected, I sat down and put the book together in a couple of days. The idea that "you're nobody until somebody loves you" took hold and guided the process.”
Can you explain what you mean by this? 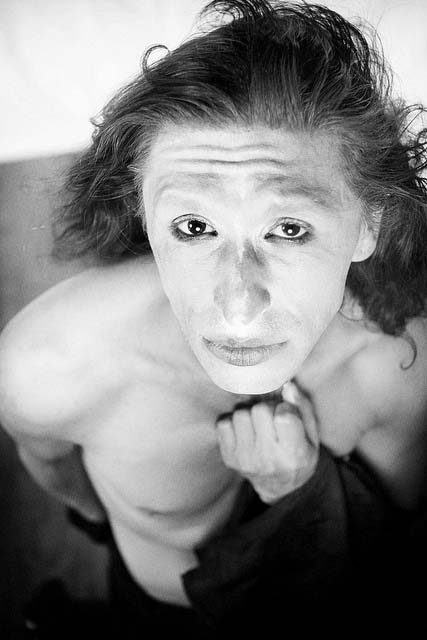 SHELDON:
Anger is an energy and I was pissed. Putting the book together was thus inspired. Big cities can be mighty cold places and people are either too self absorbed or too scared to pay much attention to anyone else. Just take a seat on the subway and look around. You'll know what I mean. And you definitely do not talk to strangers, let alone photograph them. But that's something that I do, and I hope that I do it with compassion.
The theme for the book was inspired by a line from an old song, "you're nobody until somebody loves you." And I found it to be true, when looking at this series of photographs that I had gathered. These strangers, these nobodies had become somebodies in my mind. I knew or thought I knew something about them that they didn't even know about themselves. Getting to know these individuals, if even for a moment was an act of love on my part, and on their part. Through the simple act of recognition, I overcame and continue to overcome, some of the personal barriers that keep me separate and keep us separate.
This is what I was thinking about as I put the book together. I remember every encounter, every conversation and every face. Yet, the total impact of this book of pictures became so much more. I realized that not only do we need to be loved, we need even more to show love. And I think these moments of recognition, which are so hard to understand let alone explain have the power to transform us. 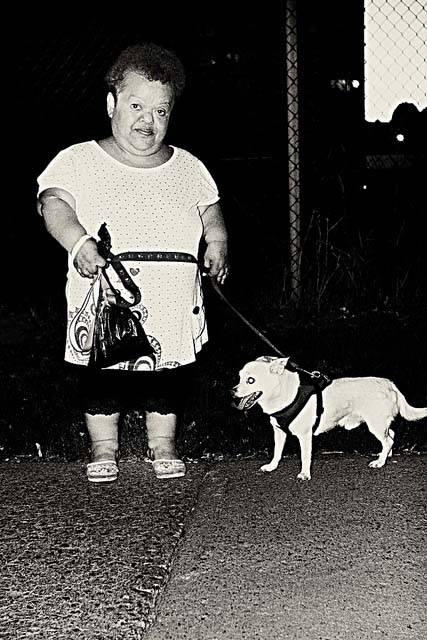 TID:
You also mentioned in an earlier email, “approaching strangers is about confronting myself, overcoming fear and for a very brief moment , getting to know someone.”
Can you talk more about this?
SHELDON:
The process is simple. I'm inspired. I either approach the person I want to photograph and strike up a conversation, then take the photograph candidly as I imagine it in my minds eye, or walk away without an attempt. Fear is with me every step of the way, yet I am compelled. I'm shy by nature and a lone wolf. The worst thing anyone can say is no. That's easy to enough to handle. Why does it stop me?  Sometimes It does. I just move on and try again. 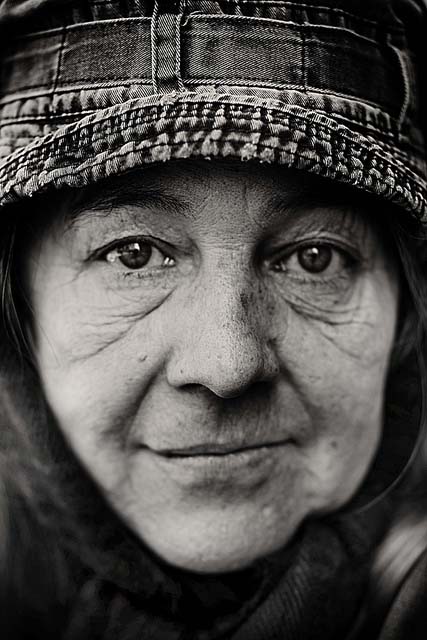 When I think about it, it all depends on intent. If I make up my mind beforehand that I'm gonna get the picture, more often then not I do. Sometimes you have to whistle or smile or act the fool. Anything to get out your head.
The most difficult situation is when inspiration comes and I'm on a crowded subway. I dislike working with people watching me. I see an opportunity, and I do nothing to make it happen. I'm frozen. Not wanting to expose my own vulnerability or perhaps embarrass the person, I miss the opportunity. I feel as if I've lost something that I could have had but in reality, I've lost nothing. It's just a conversation that I'm having with myself.
TID:
Can you talk about some sessions when things aren't working, and how you handled them? 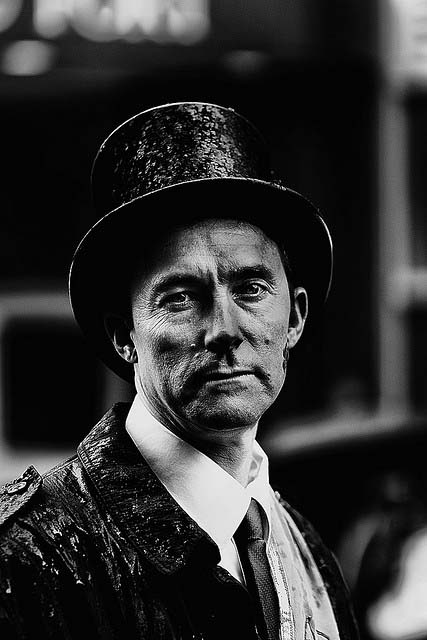 SHELDON:
When things aren't working out on the street, I try to remain hopeful. I don't make a big deal out of it. It's not like my livelihood depends on it. If I'm not having any fun making pictures, I go home. If I get a chance to photograph someone and it's not working out, I simply thank the person for their time and move on.
On occasion, I've had to pull film from my camera, delete files, but sometimes I stand my ground and explain my actions. When someone doesn't trust you, it's best to simply walk away. I want an open encounter, even if it is just for a few minutes. There have been times when I've made a picture in a bad situation, only to get home and find that there was nothing much there anyway.
TID:
How have your encounters with people influenced you? 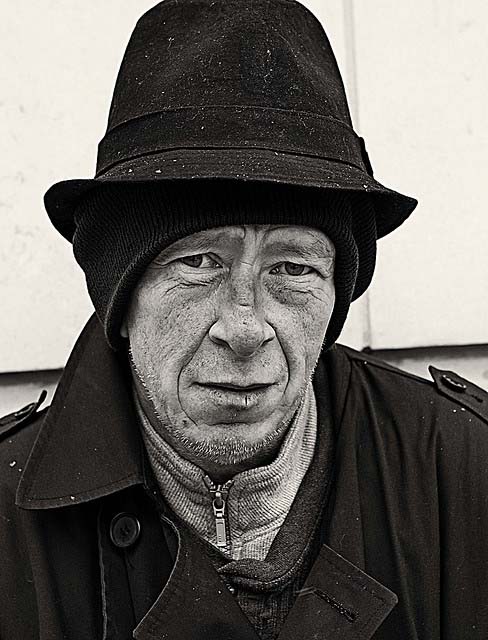 SHELDON:
Their influence has been positive. I've realized, in reality, most people are as afraid of me as I am of them. It's seems to be the way human beings are wired. Once overcome, I realize and so do my subjects, that there was nothing to fear in the first place. People are generous beyond belief. Every time I meet someone new, it's like a gift. Whether I make a picture or not. It's not easy to look into a lens placed three feet from your face and be yourself. But the people I meet have done it time and time again. They trust me, and I have learned to trust myself.
I've learned to suspend my judgement. It doesn't matter to me what you do in your life. What is important is who you are in relationship to others. Who I am. Pictures don't just happen. You have to act. All the rest is dreaming. It takes time and effort."Nobodies" was seven years in the making. I'm not the same photographer that I was when I began. When I look at my efforts it seems as though another person made those pictures. And though I remember every encounter, in my mind it's a miracle that I got a stunning picture out of it.
TID:
What have you learned about others?
SHELDON:
Not everyone is going to become my best friend, but I've learned that people are far more open than I once believed.  They are willing to share their time and their thoughts with a total stranger. The irony of my title is that the people that I have pictured are anything but nobodies. I take away much from the encounter. The subject may or may not receive anything, and that's OK. They're not asking for anything, anyway.
You have to create the right conditions to photograph strangers. People can see right through you, so if you're not up front, neither are they. And most people want nothing in return, not even to see how you've pictured them. And I find that those in our society with the least seem to be the most giving. I've seen this often over the years. 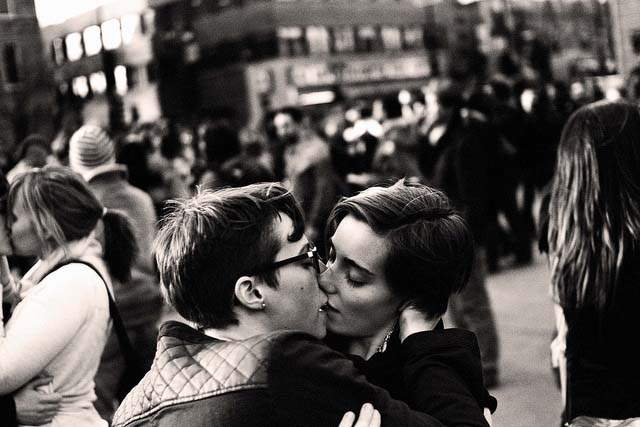 TID:
What do you think is different that you do in your approach to people that others may not? Can you give us an example from this project?
SHELDON:
I'm not sure. Maybe I'm more I'm willing to listen, more willing to fail, more willing to spend my time without the need to profit. Though often apprehensive myself, I'm willing to take a chance.
I was in Nashville in January 2012. I had a couple of hours to wander around. The streets were empty and it sure was cold for the South. I saw a man I wanted to photograph. He looked the rough sort and once again in spite of my own concerns I walked up to him. I don't think anyone payed any attention to him at all. He told me that he was thinking about killing himself. He was a junky and he was at the end of his rope. To him it seemed as if no one cared. I don't know what he saw in me, but for a few moments he put his troubles behind him, his thoughts of ending his life and stared down the lens of my camera. I didn't say much. I only listened. I did judge him or tell him that he should do what he was thinking of doing.His countenance had changed. He simply thanked me and we parted company. I'll never know what happened to him.
My father was a salesman. I often went along for the ride when he went to work. He'd pull up in front of some dilapidated farm house and knock on the door. The woman of the house would  answer and tell my dad that her husband was out working in the field. My father would walk out into a muddy field and meet the farmer on his ground. More often than not, we'd be invited back to the farmhouse for lunch. There would be little talk of what was actually being sold. My dad was social being. He enjoyed the talk, the company. The sale would take care of itself. I think that this is how I approach people. My father seemed fearless yet I never asked him about it. I think he was a very trustworthy man. Maybe I am too.
TID:
In conclusion, what remaining advice do you have for photographers?
SHELDON:
I feel compelled to photograph. Like it's in my blood. I think every photographer should feel that way. Don't have too many expectations. Otherwise you may miss all the surprises along the way. Get lost sometimes and enjoy it. Don't shoot with your eyes closed. Don't photograph in groups. If you can't take a good picture in your own backyard, don't even think of travelling afar. Learn to trust. Don't fool yourself. As Warren Zevon said, "Enjoy every sandwich".
:::BIO::: 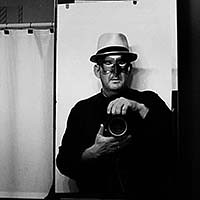 Shelden was born in Montreal in 1958. His father was a salesman and he used to accompany him on his father's road trips. His ability to make cold calls and connect immediately with his prospective customers was a primary influence. The experience left its mark, influencing him to start taking pictures at a young age, continuing the practice on and off for most of his life. With the advent of digital photography and an eye opening study of the masters, he shifted towards photography. Self-taught and pretty much isolated from the sophisticated world of post-modern photography, Sheldon continues to look to the road for adventure. As he says, "Some people you can know in a moment and others you will never know. I guess that’s what my work is all about. Who am I? What am I doing? Where am I going? We all ask the same questions."
You can see more of his work here:
http://www.blurb.com/books/3544552
http://www.blurb.com/books/5254041-wayfaring
https://www.flickr.com/photos/[email protected]/