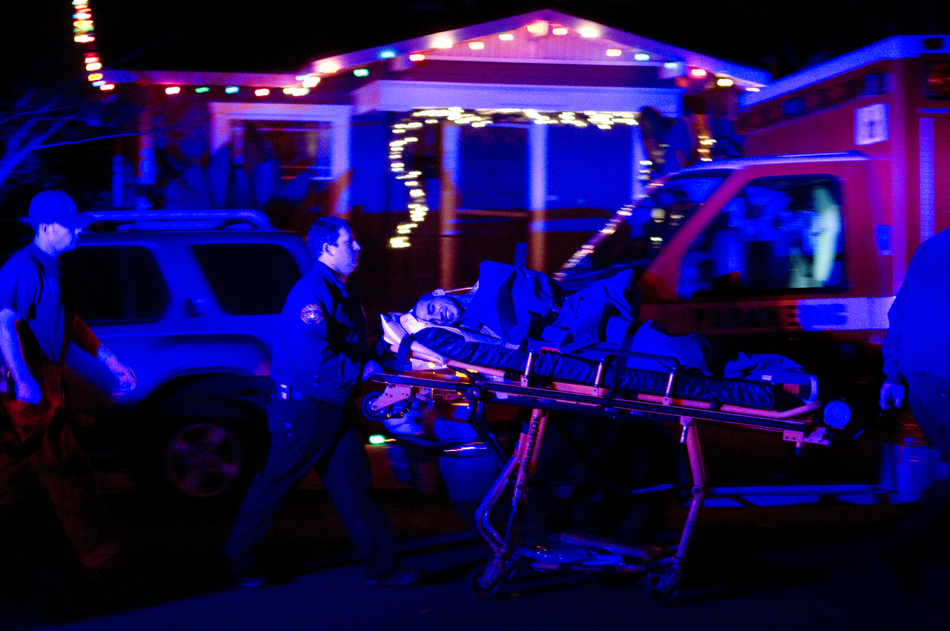 TID:
Since I used to shoot for a newspaper, I'm drawn to this hard news image you made in your hometown of San Diego. Can you tell us what's going on in the photo?
SAM:
Thanks, Andrew. This is an image of a 28-year-old man named Daniel H. who was hospitalized and arrested after allegedly becoming combative with police. The officers tazed the man and said that he was under the influence of and in possession of methamphetamine - hence the smirk on his face. Until you contacted me about this interview, I hadn’t thought too much about what happened to him. What I found out when I poked around, however, is that he is now in prison in San Diego accused of murder in the first degree. He has a long list of priors and could face life in prison if convicted. It just goes to show that you never know what will become of the people whose lives you document. 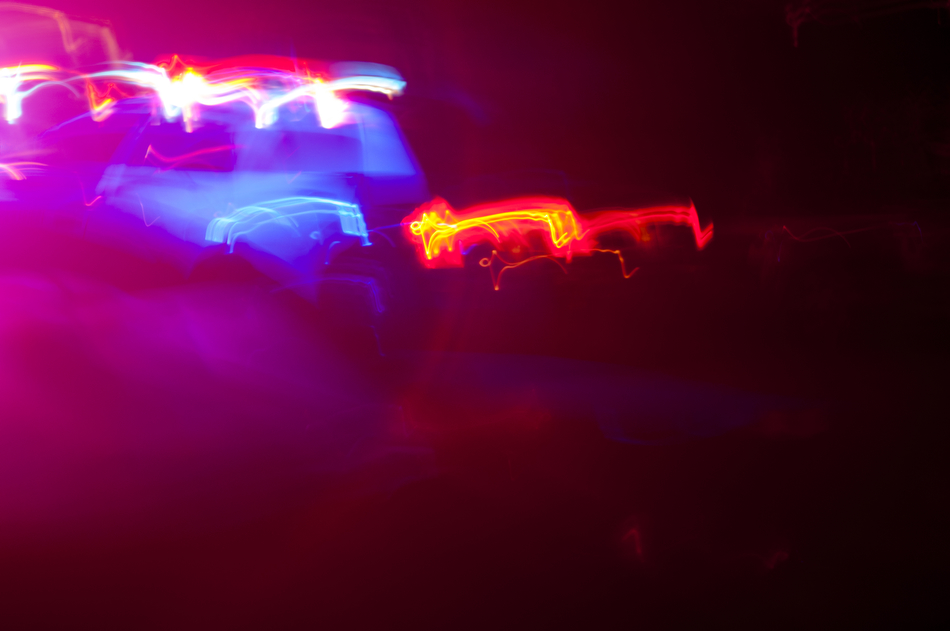 SAM:
It’s interesting you immediately mentioned shooting for a newspaper. This image was made about two weeks after I was laid off from my staff job at an online, non-profit newspaper in San Diego. I was in the process of becoming a freelancer and was sitting at home with my wife and one of the reporters I was laid off with. We heard a whole lot of commotion outside: someone yelling and carrying on, cursing at the top of his lungs. We shrugged it off and then shortly afterward saw all of these sirens outside. I had a glass of wine in me and wasn’t sure if I should even go shoot.
I grabbed one camera body and sort of strolled outside to see what had happened. I recognized a couple of the officers, said hello and then just started working quietly, at first just dragging the shutter making a silly photo of the emergency lights before I even thought about what was going on at the scene. It was a really casual feeling, shooting this without the pressures of making a picture for a news organization. 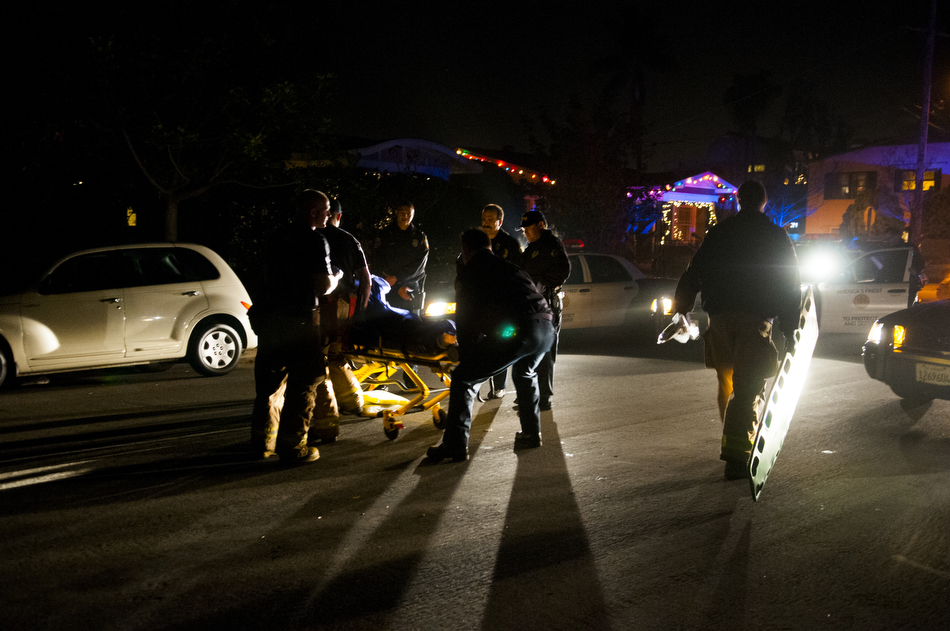 TID:
Since spot news situations can be a high stress environment, including life or death situations, what do you do to stay calm and in control of your person?
SAM:
I was pretty fresh off of covering Occupy in San Diego at this point, so this scene actually seemed pretty low stress: no one was swinging a baton in my direction. I think it’s really important, though, in these situations to trust yourself and your instincts. Let your feelings guide you through the scene. Feed off the energy of the other people around you. I’ve had people tell me in the past “When you feel the fear, run towards it,” or something to that effect. I disagree - a little bit of fear is healthy. It reminds you to have your wits about you. It often is a product of a very interesting or important scene unfolding. But it also might mean that something very negative is about to happen to you. I trust my body. I trust my instincts. When I feel the fear, it often means that it’s time to get the hell out of there.
Beyond that, it’s just about deep breaths and trying to organize the chaos in front of you into a tidy little rectangle (or in this case, a square).
TID:
What challenges did you encounter while making this image?
SAM:
I was in a very, very strange place mentally. Here was this wild scene dropped right onto my doorstep. I had approached scenes like this so many times in my career. And it felt so natural, with the backing of an editor and a news organization, to photograph the scene. But I didn’t have that backing. I felt very alone. Two weeks earlier, I was sitting at a bar near my house. It was two days since I’d been laid off and I sent a text message to one of the reporters at the paper: “Know what blows: finally coming to the realization that you are no longer a journalist.” My buddy talked me down off of that sentiment, but I couldn’t help but feel that. Anyway, this is a roundabout way of saying that my biggest challenge was I didn’t feel like a journalist. I didn’t feel like I had any purpose behind what I was doing, and I wasn’t sure whether I had a purpose on that crime scene.
TID:
How did you overcome these challenges? 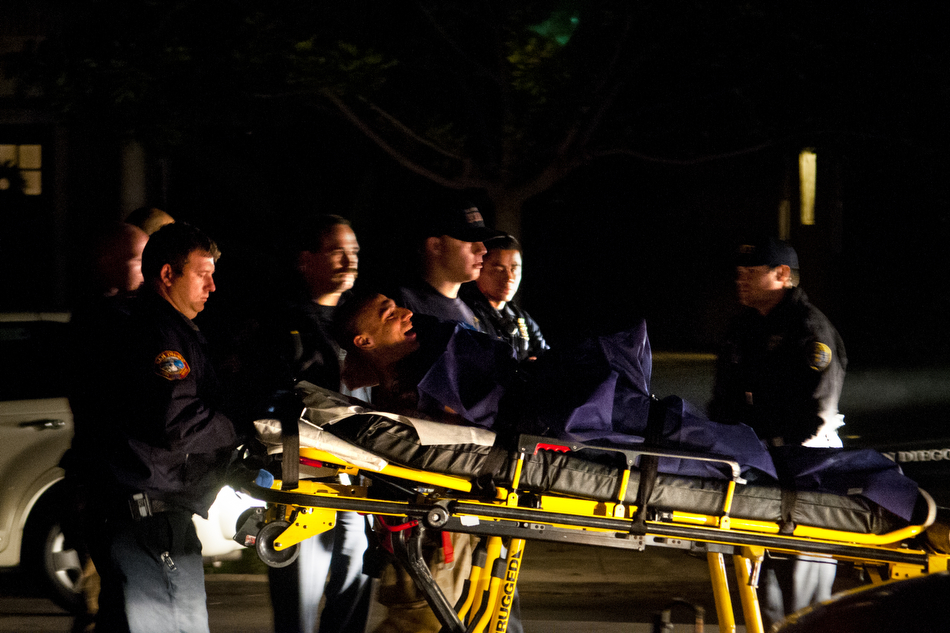 SAM:
My layoff turned out to be one of the best things that ever happened to me in my career, and it even worked out in this situation. If I had been working this as a staff photographer, I would have pushed way into the scene, trying to get some classically styled spot news photography. I wouldn’t have stood back and been fine with making a whole shoot of crappy images. This image only came about because I wasn’t shooting for someone else. The morning that I was laid off, I called my good friend James Gregg, who’s been featured in this space before. He was pretty stunned, but pulled off an epic impromptu motivational speech. He told me that he wanted me to grab my camera, to go outside, try to get a pulse of the community and the world around me and, he and told me: “shoot the way you feel.” About ten minutes later, I met up with my friend Adrian, who had also been laid off and had all his work belongings in the back of his car. This was the way I felt. And it was the first time I had ever very deliberately tried to capture some of my own emotion in an image. 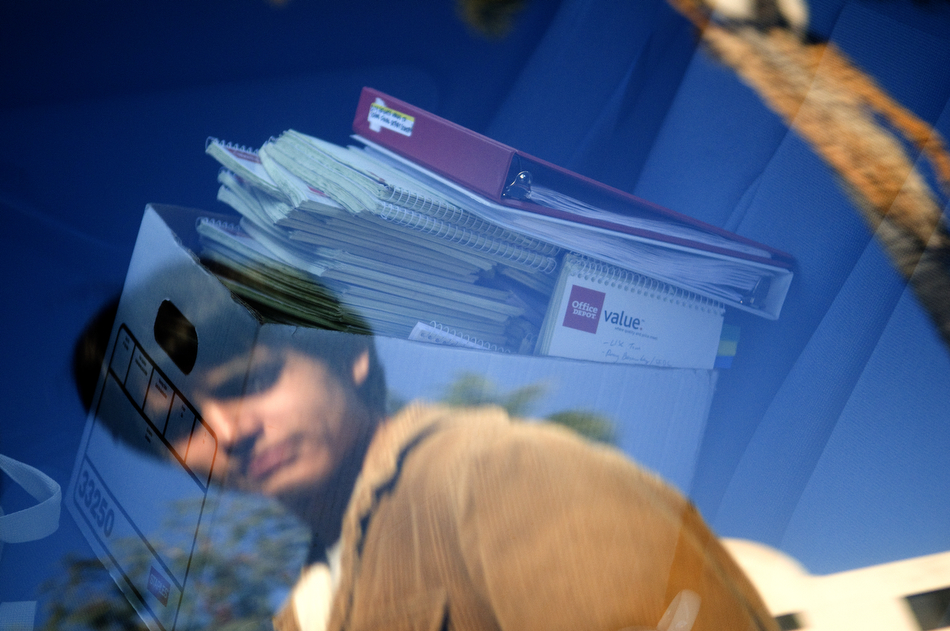 This is the same thing I did while shooting this scene. I reminded myself: “shoot the way you feel.” I didn’t feel like pushing up into the scene and trying to get a classic newspaper photo. I felt a bit standoffish, a bit unsure, a bit scared. The world around me felt surreal. And I think a bit of that came through in the photo.
TID:
Can you talk about the moments leading up to the picture and actual moment? 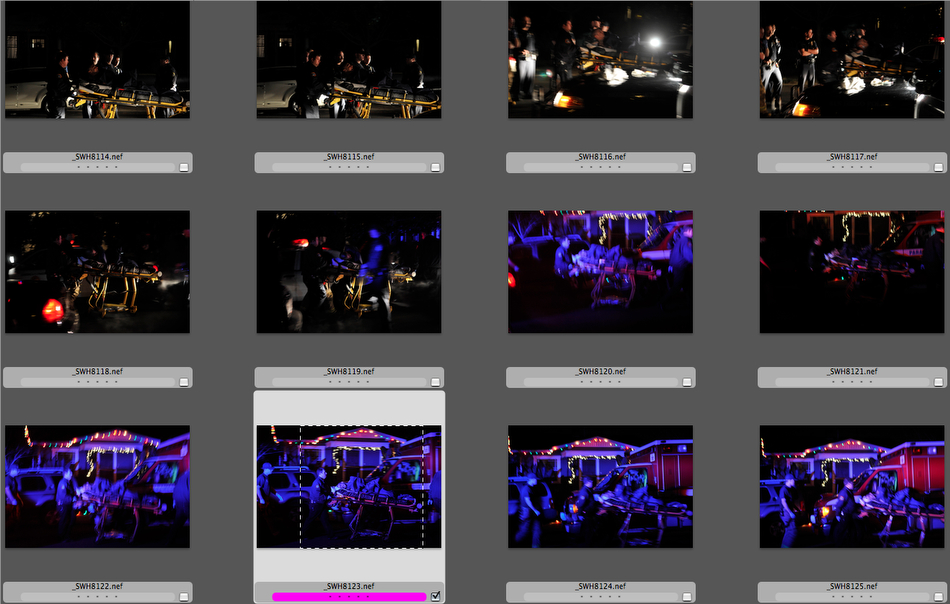 SAM:
Leading up to this photo, there was something else occurring that I’ve always kind of kind of kicked myself for not getting. There was a woman at the scene and she was crying and yelling uncontrollably. I don’t know if it was the suspect’s mother, or girlfriend, or what, but I kept wanting to lift my camera to shoot a photo of her. This is another way that not having a news organization behind me stopped me from getting a photo. I kept thinking: why am I going to take a picture of this poor woman if it won’t even get published?
I tried to sneak two frames from my hip and felt awful about it later. They didn’t come out sharp and I think that was the Photo Gods punishing me for trying to be sneaky about taking a picture.
So I was having this little mental debate with myself and hanging back from the scene. I watched from a far as they loaded him onto the stretcher and saw them start carting this guy to the ambulance. I knew I was shooting at a real low shutter speed, so I just held down the trigger and hoped something would be sharp, lit up by the sirens and would have a bit of movement in the image. The fact that there were Christmas lights in the background just turned out to be a bonus when I looked at my take later and they complimented the blues and reds already coming from the ambulance sirens.
I didn’t even collect any caption info at the scene and had to go back and call the police department to get the details later.
TID:
What surprised you about the moment?
SAM:
That grin. This guy had just been tazed and he was smiling as he was carted away. It was really bizarre and spoke to the power of the drug he was accused of being on. Also, I was surprised that anything came out sharp. I was dragging my shutter and panning, just hoping something would be borderline sharp. The rest of this shoot was a total disaster except for this one frame.

TID:
Do you notice a change in the way you photograph when it comes to spot or hard news?
SAM:
Shooting this frame was part of a constant growing experience for me that started while I was a staffer but really accelerated when I went off on my own. This picture is a reminder to me to trust my instincts, trust my body and let my feelings come through in an image.
TID:
Do you have an advice for photographers?
SAM:
I have two main bits of advice. The first is simple: be yourself.
I look at great work every day being produced by friends across the country and I often find myself falling into two traps. The first is trap is wanting to produce work that looks like theirs. The second trap is worrying about whether I actually have a visual style, whether I have a distinct vision, and wondering when and where I’ll find it. But I don’t think you can force yourself to have vision and style. They have to grow into you organically.
The second bit of advice is to distance yourself from anyone who wants to talk your ear off about how much this industry is falling apart. I recognize that things aren’t the way they used to be: rates get cut and people lose their jobs and it’s harder than ever to piece together a living.
It’s really important for us to understand what’s happening in this industry and to protect our interests, but it can be really toxic to dwell on it. I’ve been laid off. It hurt and it was challenging, but it wasn’t personal and it wasn’t the end of the world. In fact, the two bosses who sat me down and broke the news to me were at my wedding last week and are some of my closest friends. If you’ve found your way to this blog, you can probably name more than 100 people off the top of your head who are making a living wage taking pictures and documenting the lives of others. We all piece it together a different way. And if we can focus on the images, the storytelling, and allowing space for our personal vision to grow, we’ll serve both ourselves and the viewing public much better.
:::BIO::: 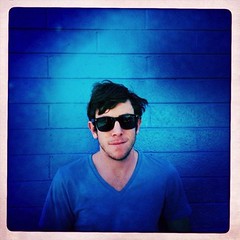 Sam Hodgson is a freelance photojournalist based in San Diego, California. Since going freelance in December 2011, Sam’s shot for The New York Times, The Wall Street Journal, Bloomberg, Reuters, Entertainment Weekly, The FADER, and has also produced photo and video projects for local media. He’s been a photography instructor at San Diego State University’s College of Extended Studies since 2008. Sam was born in Christchurch, New Zealand and grew up in Escondido, California. Yes, he’s seen Lord of the Rings and Flight of the Conchords.
You can see his work here:
http://www.samhodgsonphotography.com
EDITOR'S NOTE:
This week's interview was done by Andrew Lamberson, who is is a freelance photographer and photo editor in Brooklyn, New York. You can see his work here:
www.andrewlamberson.com