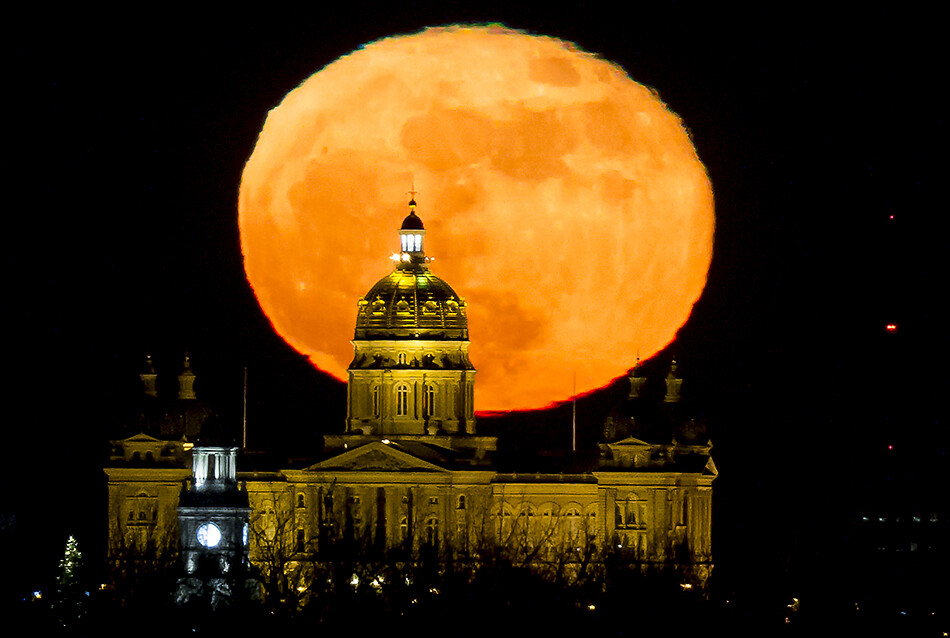 TID:
What a striking and beautiful image. Can you tell us some of the backstory of the photograph?
RODNEY:
I’ve been a fan of The Image, Deconstructed for a long time. Getting picked as a feature feels like getting an image selected for SI’s Leading Off.
As a staffer at the Des Moines Register, we get to cover the whole state of Iowa from our base in the state capital. The Iowa Statehouse is one of the most beautiful statehouses, inside and out, in the United States. It gets photographed a lot. I swear every night someone will have posted a photograph on social media of the golden-domed structure from somewhere in the downtown area. Opposite the Statehouse, across the Des Moines River, is Des Moines’ downtown skyline a little over a mile away. Over ten years ago I was at the Iowa State Fairgrounds, parking my car for the State Fair, when I noticed looking to the west that the Statehouse and the two tallest buildings in Des Moines, the Ruan Center and 801 Grand, lined up, overlapping each other. Shooting between two trees in the parking, it was the one spot in the whole city where you could line-up the three structures, getting the iconic buildings together - from over 3 miles away. 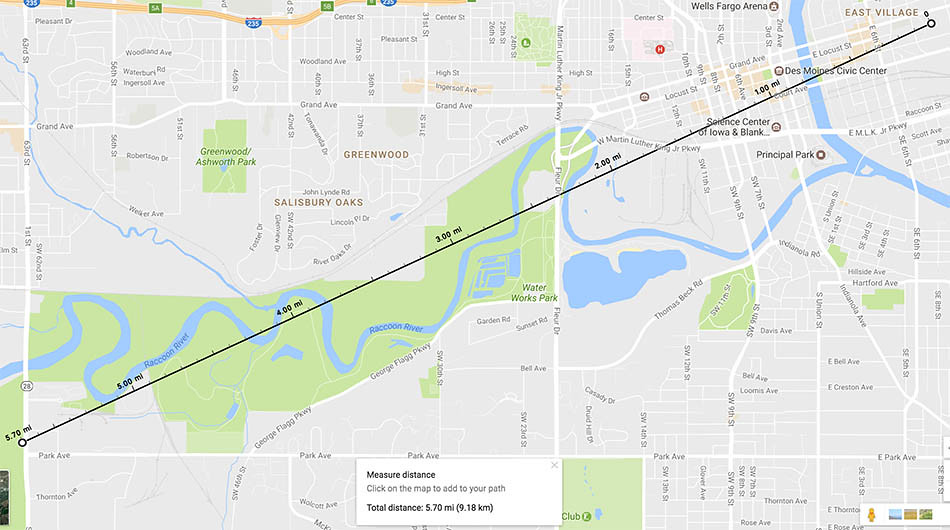 I spent every 4th of July for the next decade trying to get a clean shot of the fireworks that would be set off during the Des Moines Symphony’s pops concert. I used a 400 and/or 500 mm lens to stack all the elements, compressing them together with the fireworks in between.
The best compliment I received for the photos was from a handful of readers who were mad that the newspaper would run a fake photo, obviously photoshopped composite image of the Statehouse, because they said those building aren’t anywhere near each other. I would then write a short piece about image compression and telephoto lens. Mission accomplished for showing readers something new. 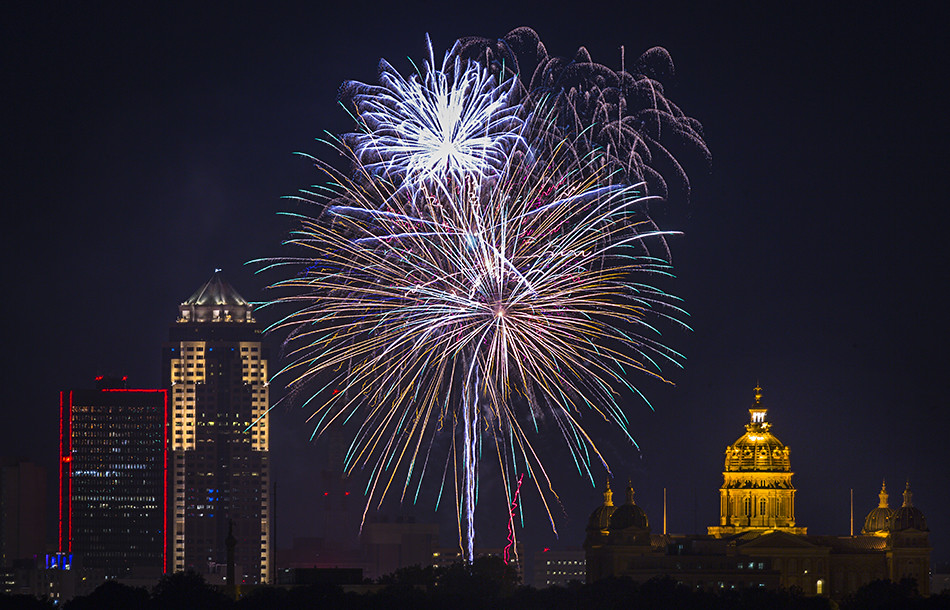 So fast forward a few years and now I was trying to capture a Super Moon with the Statehouse but I could never find the right parking garage, rooftop, etc., that would line up with the dome. You couldn’t see the moon on the horizon because of the autumn humidity in the Midwest so it was not visible until it had risen past the buildings. That night I captured the moon with a statue next to the Statehouse. Scores of photographers were looking for places within a block of the building and others were across the river to the west next to the sports arena.
I ended up down at the river bank running along the bike paths to line up the Soldiers and Sailors monument with the rising moon with a 500mm. Within two minutes it cleared the statue.

Jump to a month ago and I had missed the Dec. 2016 full moon the night before because I was out of town on assignment. As I was driving back at dusk there was a glorious full moon with a little sunset glow lighting the landscape in my rearview mirror. Because of the single-digit temperatures and clear weather that day, the moon was visible as it breached the horizon. Not having any of the newspaper’s long glass with me I thought about the next evening's moonrise and lining up the Statehouse from a spot over 5 miles away to the west. Luckily it worked but it was pretty much more chance than I like to admit.
TID:
How did you chose this position to shoot from over others in the area? Additionally, have you tried to shoot this before and what was the result?
RODNEY:
Back in the early 2000’s I helped out with the photo project America 24/7. Every day I got up early to greet the light, looking for a different spot to highlight the central Iowa landscape. One of the spots from where I photographed sunrises years before was where I shot this moonrise behind the Statehouse. Google maps put it 5.7 miles as the crow flies. Being that far away I knew the moon would loom over the Statehouse in size. When I shot sunrises before from there I could never get them to line up completely but as I learned recently,  the moon’s orbit is not on the same plane as the earth’s orbit around the sun.The moon tracks north in the winter as the sun appears further south in the sky in the northern hemisphere.
I used an app called Focalware suggested by friends and one called Moon Seeker to narrow the area to search along the stretch of highway, where I might catch the moon behind the building and it got me within quarter mile the spot. The apps give you an overlaid image showing the path of the moon.
TID:
When you first arrived on scene, what were you thinking about and what thoughts were you processing?
RODNEY:
The weather conditions were cold and clear that evening again, the moon was rising about an hour later than the night before so there would be no sweet sunset glow. The apps gave me a moonrise of 5:59 p.m. C.S.T..  I had grabbed the 500mm from our work lock-up. As I was driving north and south along the street on the western edge of Des Moines, I saw a small orange wedge of the moon breaking the horizon. I was in the wrong spot but now I knew where to go to lineup the Statehouse and moonrise. I had to turn the car around which took 45 secs, drive north about 400 yards and park on the side of road, another minute gone since the moon started to appear. When I got out of the car the trees nearby were blocking the shot. There was a small state park on the other side of the 4 lane road where there was an embankment that rose up at least 15 feet, enough to get me clear of the nearby trees. I ran across the four lane road and scuttled through the brush up the small hill.
By now the moon was already halfway past the silhouette of the building and I was lamenting that in my rush I didn’t grab a monopod or tripod out of the car. I had thought the moon would be brighter, you know, reflected sunlight, it must be bright and I could handhold the shot no problem. I still had to run about 100 ft through heavy brush to get the moon behind the building. Now the moon was only behind the main cupola of the Statehouse. I forgot how fast the moon appears to rise. It was not more than 6 minutes from the time it first broke the horizon to the point it cleared the outline of the Statehouse. I was able to get a few frames after setting an exposure. And then the moon was clear. 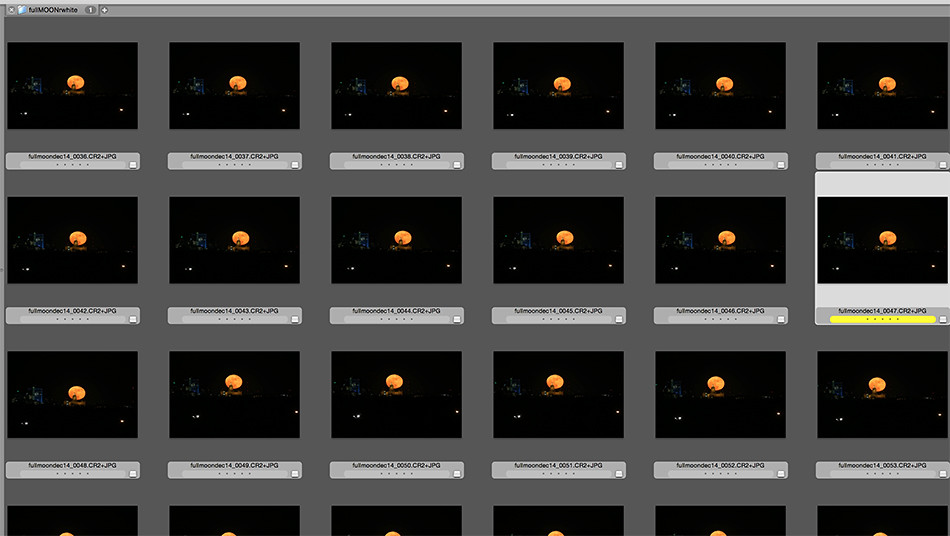 TID:
I’m always interested in how photographers problem solve. What problems did you encounter and how did you overcome them?
RODNEY:
My two main problems were: I felt under-lensed and the exposure was not what I envisioned. As you can see in the contact sheet, even with a 500mm lens it’s loose. I’ve shot digital images since the advent of the NC2000 and before in the 1990’s. Between the amazing sharpness of the Canon 500mm f4L II IS and the knowledge that I was only looking for a photo that would print in the newspaper and not for 16x20 wall print, I shot with what I had in hand. I counted on the moment and subject to carry the photo, not the technical quality.
The exposure was the surprising thing for me. Because the moon was so low in the sky, it was filtered through so much atmosphere and that knocked the exposure down by three or four stops compared to if the moon was overhead. I ended up shooting at 1/50 sec at F4 2000 ASA. Very slow for that lens length but the great image stabilization and relatively non-moving subject worked.
Since I was slogging through brush and up a hillside with literally seconds before the moon was out of position, I motor-drived dozens of frames. I should have had the tripod or monopod but there was not enough time to get to my car and back. Just like when shooting standing with a rifle, I took a big breath and cradled the 500mm and aimed high. I released half of my breath and let the lens settle lower, bringing the image into view. Pressing lightly, using the fleshy part of my finger, I let the camera take as many images as I could in one breath.
The lens stabilization locked-in and it felt like butter. I chimped the back of the camera after the first series of images and about the 20th photo in found a sharp group of exposures. Because of the low shutter speed I wasn’t sure it would work. Zooming in on the image on the back of the camera, it worked enough for what I needed. I didn’t want to go any higher on the ASA because of the amount of enlargement needed to isolate the Statehouse. Again, I was looking for something that would reproduce in the newspaper and not for a large gallery print.
When I got home I used Camera RAW in Photoshop to work up the image which was posted on social media first then published in Des Moines Register the next day.
TID:
I’m always curious also about what photographers learn about themselves. What do you learn about yourself during this process?
RODNEY:
I was lucky any workable image was exposed. This was a pre-visualized image and I should have taken more time to get in position but as many situations are not preplanned working for a newspaper, I’m fine with what transpired. I’m of the age that when ideas don’t work out this year, I have the patience to come back the next year and next year, etc..  For years I attempted to get a sunrise shot behind bicycle riders during RAGBRAI, a week long ride across Iowa. It took five years before I was in the right place for the landscape and right weather conditions to get the elements to line up. So I’d say I’ve learned to have more patience and to keep trying new angles.
TID:
In conclusion, what advice would you have for photographers who want to do these type of pictures?
RODNEY:
Talk to a local astronomy club and check websites like http://www.astropix.com for tips on photographing astronomy events and  http://www.skyandtelescope.com or http://www.seasky.org for calendars of upcoming events. 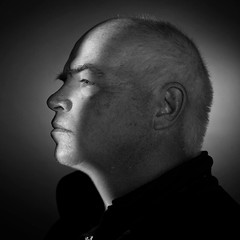 Photojournalist and Emmy award-winning videographer at the Des Moines Register in Des Moines, Iowa, since 2000. I’ve worked at Gannett newspapers since 1989 getting to cover the Super Bowl, Summer Olympics and national political conventions. I’ve traveled to Afghanistan, Greece and China on assignment for the Des Moines Register. Iowa newspaper photographer of the year twice and multiple national awards. I attended the first Eddie Adams Workshop in 1988 and have had fun working for newspapers ever since.
To see more of his work visit here:
www.rodneywhite.com
twitter: @rodneywhite
Instagram: rodneyawhite