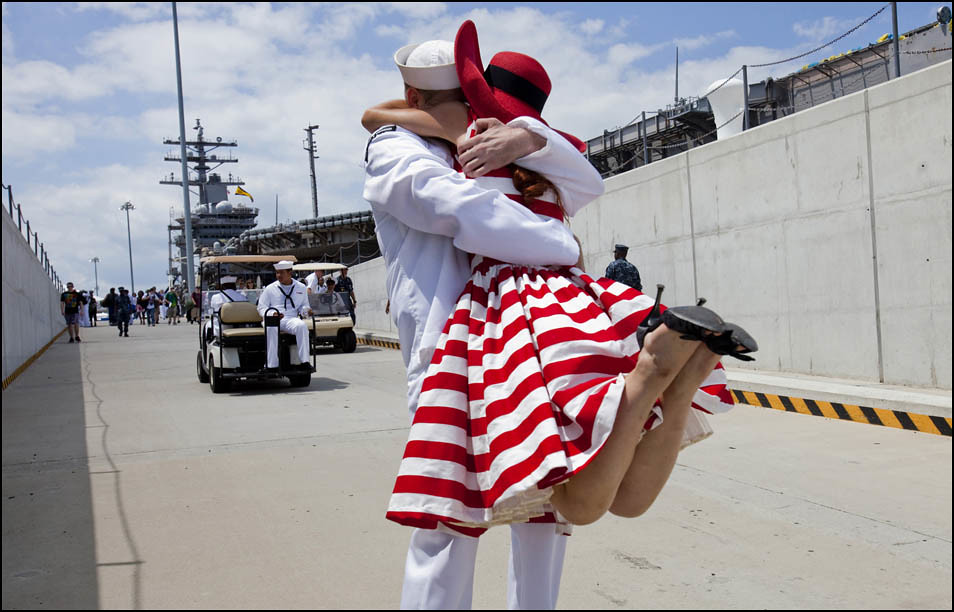 Rachel, so glad you're open to discussing this image. Thanks again.

Can you describe what the assignment was in detail? I don't think most
people know how much is involved in setting up for a Navy homecoming.
It's helpful to hear a little of the process.

The assignment was to cover the homecoming of the USS Eisenhower from
the North Arabian Sea. The first part of the assignment was to ride out to the
ship and photograph the happenings on the ship as it reached the Norfolk
Naval Base. So I flew out on a helicopter to the ship. We were with a PAO
(Public Affairs Officer) the whole time so it was important to be patient but
also try to verbalize to the officer what I needed out of it.

That was a big learning experience. So, for example, he wanted to show us
everything on the ship, but returning sailors were only in particular areas. So
it was necessary for me to communicate with the officer that I needed to be
where the sailors were. Once the ship docked, I was given the option of
covering a speech by the Captain of the ship, or exiting with a group of guys
who were new dads returning to meet their newborn babies who'd they never met.

I chose to go with the new dads. After exiting the ship, it was very crowded. As
more and more sailors exited the ship to greet their families there was kind of a
bottleneck effect. During this time it was almost impossible to make any
pictures. I'm pretty short and when I get in big crowds it becomes really hard
to make pictures because I'm so much lower than everyone. After a while,
things started to die down and the crowd waned. And that's when I first saw
the woman in the dress. 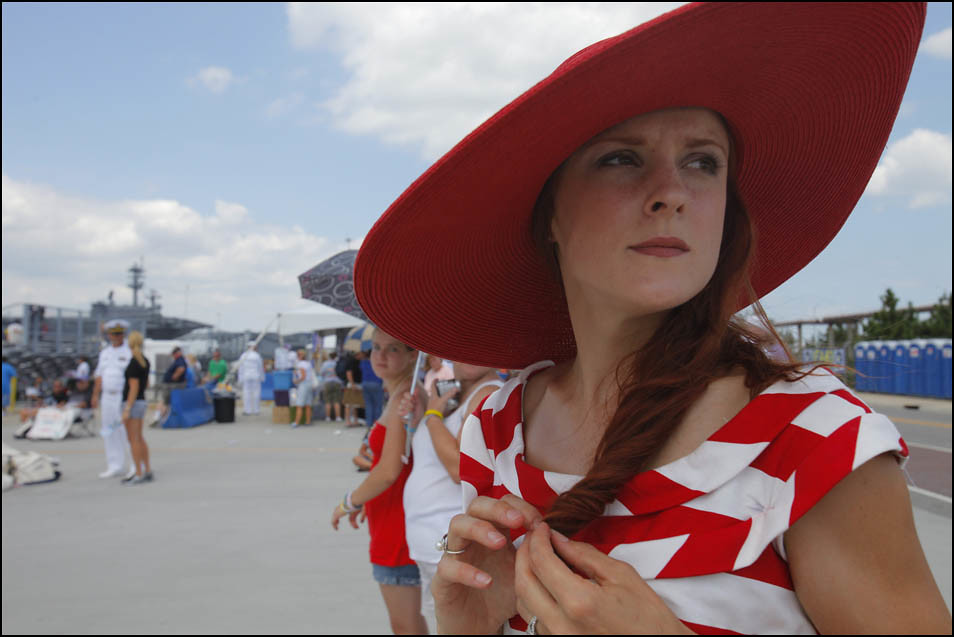 Can you tell us, in general, how do you clear your mind in chaotic
situations to focus? It's easy for photographers to lose focus
in hectic situations.

Every situation is different. My instincts usually tell me to run around
the whole area but what I've learned is that isn't the best approach. In chaotic
situations with a lot of people, sometimes staying still can be more beneficial.
It helps your mind focus on fewer elements and allows you to just watch
people. You may find some more interesting than others, and if you allow
yourself to just sit and watch, those people will appear more clearly rather
than if you're flying around trying to find moments. Let the moments
happen in front of you. So I kind of pick a place, or a person, and stick with
them.

When I do that, it slows me down, enough to where I can think about
what I'm doing and find people who may be more expressive. I guess you
could think about it like riding in a car. The faster the car goes, the less
likely you are to take in the scenery in detail... you may see it but you don't
really see it the way you need to. If you go slow, you can read the signs and
take in the details. When you go slow in a crowd of people, you can read their
faces and interpret the emotions or anticipate their actions. 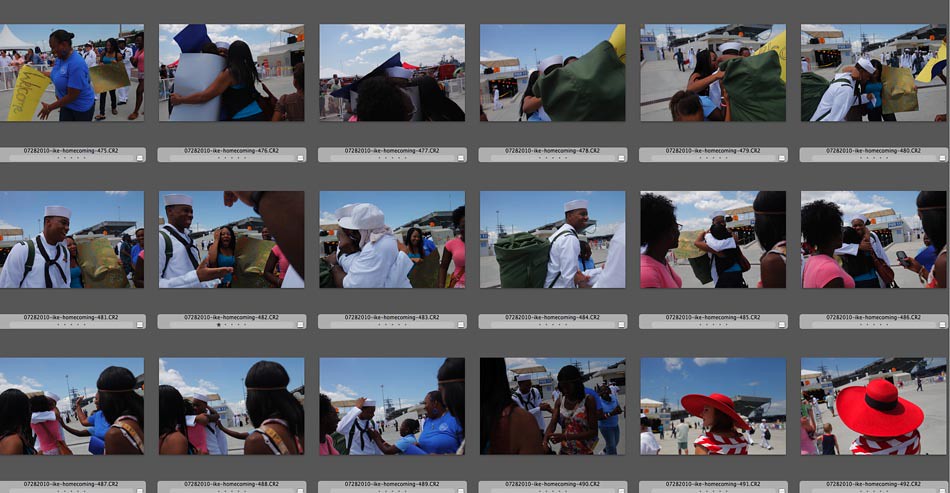 You said that working with the military was a big experience, why is that and
what did you learn?

It was a big day, a long day. The reporter, Shana, and I started really early in
the morning and didn't get back to the office until around 4pm. There were
just a lot of firsts involved, first time on a helicopter, on an aircraft carrier,
photographing some of that raw emotion that comes with a military
homecoming, all these things were a first time experience for me. I wanted to
do a good job but was completely out of my element. So you do everything
thing you can to prepare. Pack sunscreen, water, granola bars. Wear
appropriate clothing you'll be comfortable in. Make sure you know the PAO's
name and phone number, the meeting point, be early, have proper id.

For those who aren't familiar with working with PAO's, do you have advice
on working with public affairs with the military?

PAO's are Public Affairs Officers. They are the Public Relations for the
military. If you cover the military, you'll work with one. They're in charge
and accompany you during your shoot, at least they did when I was there.
They are pretty good about not hovering too much, at least in my experience.
But if they tell you to not do something, then don't do it. If you speak to
them and explain what kinds of pictures you want to take they usually get it.
But you have to articulate exactly what you want to do.

While I was on the Eisenhower, the PAO was super nice and informative. But
he wanted to show me the entire ship. The only problem with that is, that
because it was coming home, most of the ship was empty except the hanger
deck. The hanger deck is where all the sailors on the ship gather as they leave
for their families. I needed to be there. So while my PAO was offering to show
me the mess hall, I just politely asked if we could stay in the hanger deck and
explained there was a lot emotion going on here that I wanted to photograph.

Sailors were excited, nervous, exhausted... When I explained that to him, he
said okay and stood back. Also ask them questions, they are a wealth of
knowledge, and that can assist you in knowing where you want to position
yourself. Military is very ceremonial so it helps to ask how things are going
to go down. 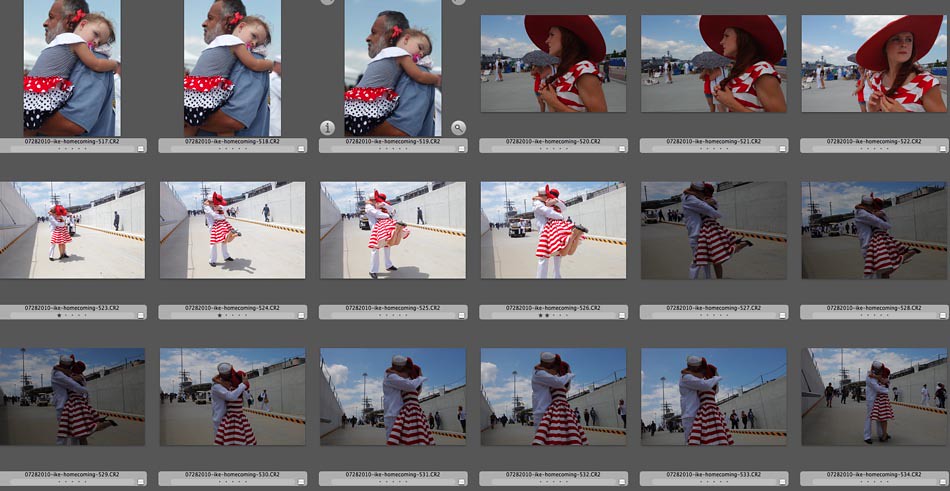 I think it's a common assumption that homecomings can be loaded visually
and are easy to shoot, but it's not always the case. Sometimes the emotion
passes quickly and it's difficult to capture. Can you describe how you put
yourself in position to make this image?

There was a beautiful red headed woman in a vintage dress, complete with
a matching hat and heals. She was alone and waiting. I was about to leave,
but when I saw her I thought, we have to go talk to her.

I found out she was waiting for her fiance, and that she had made the dress
herself. It was a ritual that she does every time he returns from deployment.
They both love the 40's and 50's style of dress. We waited about 45 minutes
before he arrived. As soon as she saw him she ran for him and leaped into
his arms. While the moment happened right in front of me, I think that
spending time with her and listening to her tell the details of their
relationship is what was important to set up for this moment. 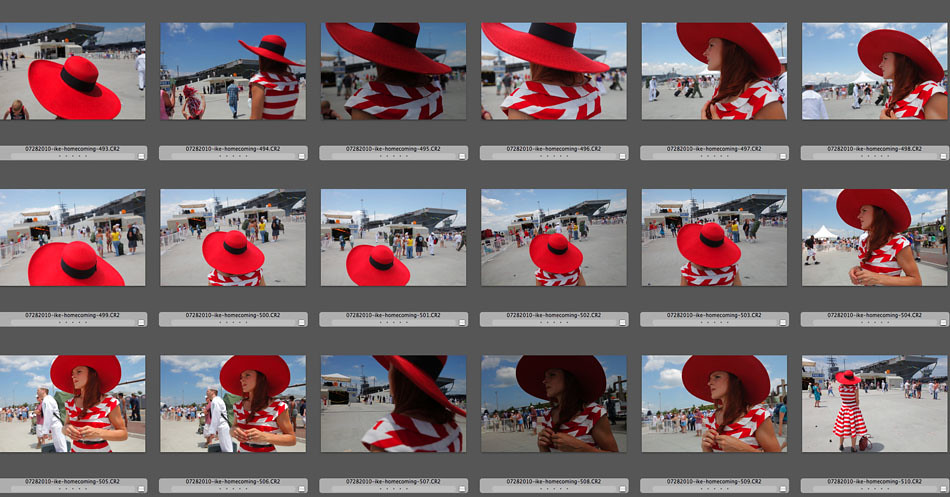 It's important to simplify the frame. In large crowds if you force your
eye to see further away or in a more compressed way, you catch
moments that you may not be able to get to in time. Especially if its
hard to move. If you shoot a scene wide, make sure to watch your
background (I forget this a lot) but its an easier read if you can simplify it. 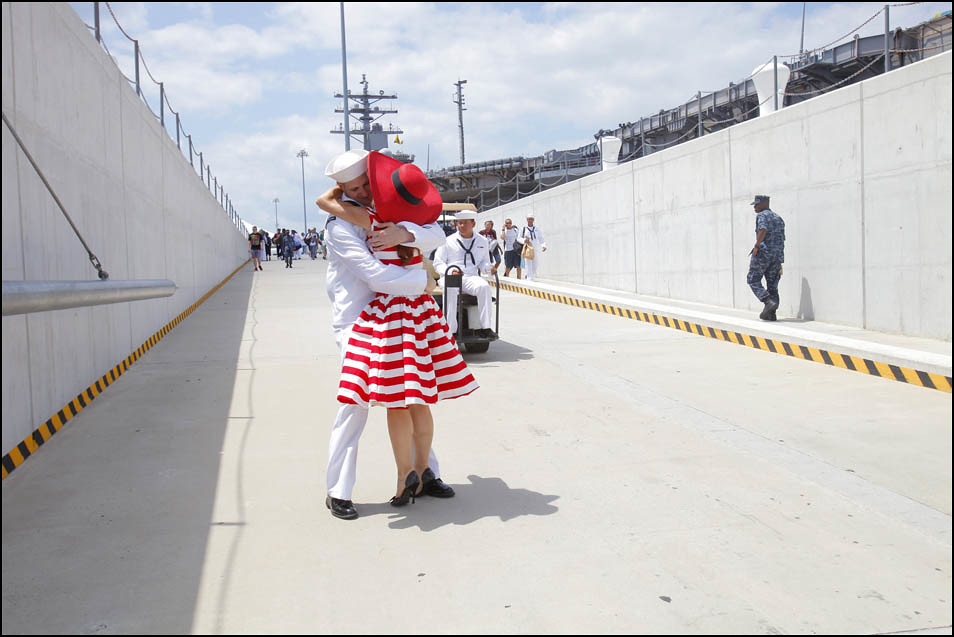 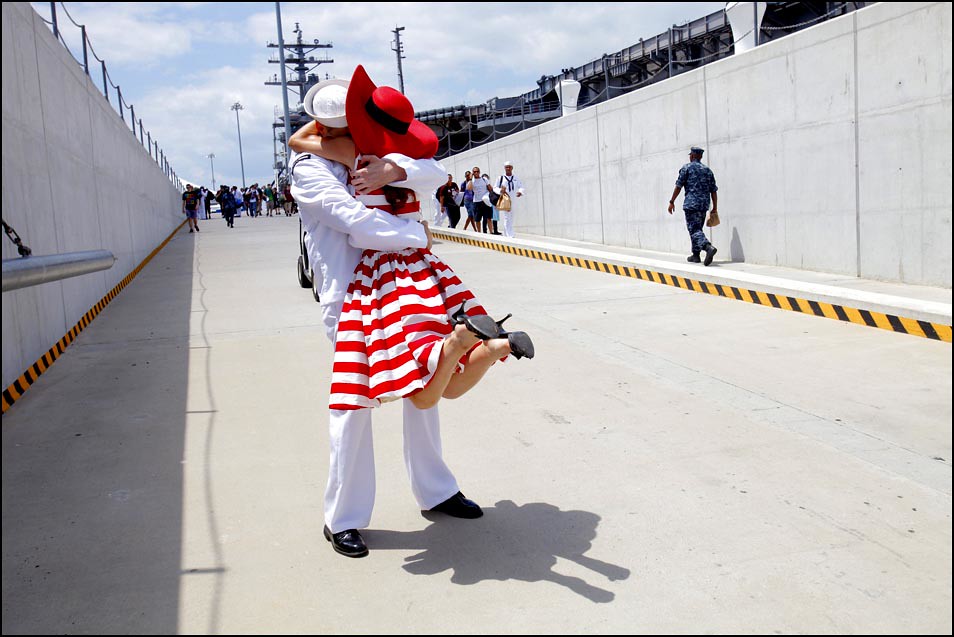 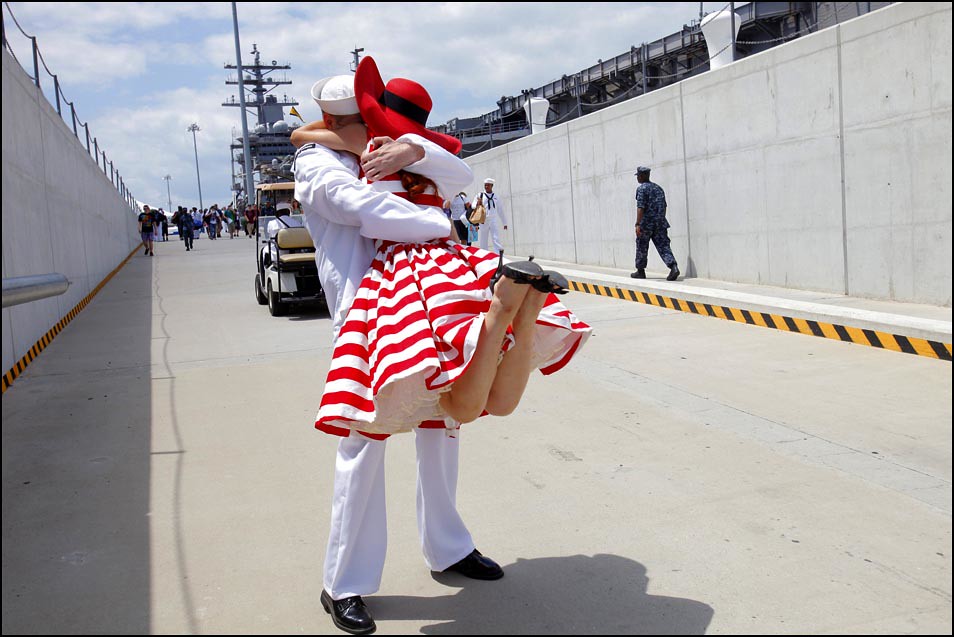 In the end, how long do you think it took to make this image, from
arrival to ending?

I started my day at 7 am, and I made this frame around 2:30 pm. It was
the last scenario I shot. This particular frame was almost the very last
frame.

Rachel Mummey was recognized as this year's College
Photographer of the Year and is currently interning at
the The Herald, in Jasper Indiana. She previously interned
at The Palm Beach Post and The Virginian-Pilot.


Originally from Iowa City, Iowa Rachel has spent the last
two years working towards a Master’s in Photography
from Ohio University in Athens, Ohio. During that time her
work has been featured in Photo District News and News
Photographer magazines and online at New York Times
Lens Blog, Multimedia Muse and Kobré Guide websites.
Driven by in-depth narratives, she continues to work as a
documentary photographer on long-term projects about
people and issues that inspire her.

You can view her work at:

Next week on TID, we'll take a look at this striking image by Amanda Lucier: 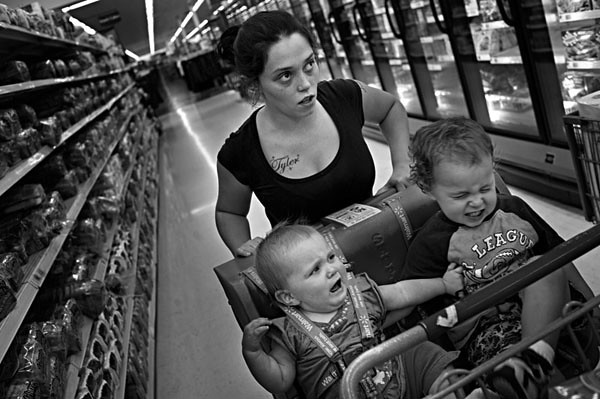 As always, if you have a suggestion of someone, or an image you
want to know more about, contact Ross Taylor at: [email protected]