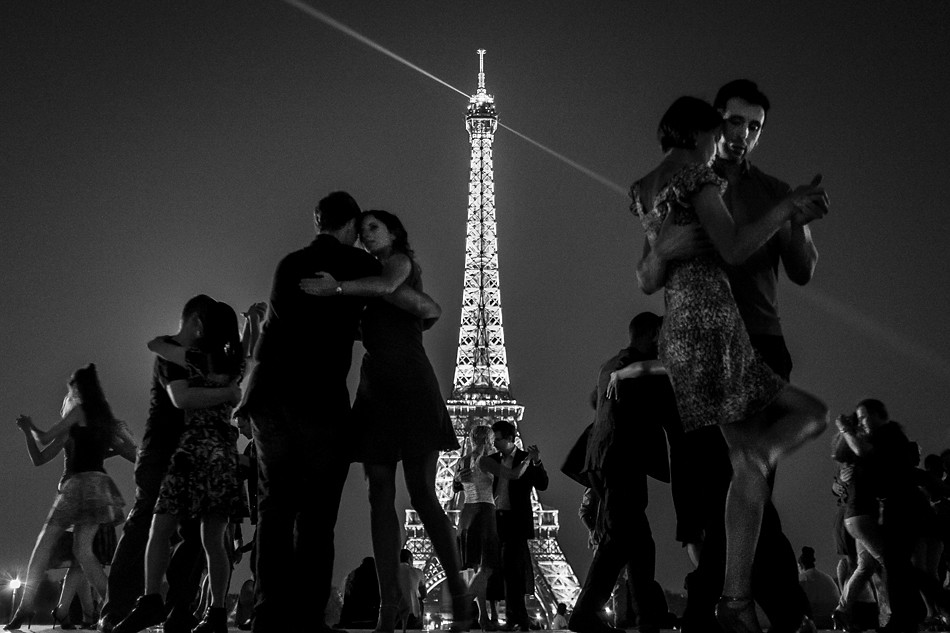 This is a beautiful moving image, please tell us a little of the backstory of the image.

This photo was made on a vacation trip, with my wife, Jenny, to London and Paris. We are trying to make a major trip every five years in celebration of our anniversary. It was our last night in Paris and we planned to go out to dinner and then walk over to the Trocadero Esplanade across the river from the Eiffel Tower to relax for a few hours and enjoy the evening and the view.

As we arrived, I was making some photos of the Eiffel Tower with a statue in the foreground when my wife came over to me and pointed out the dancers. I had heard the music, but was not paying attention to where it was coming from. 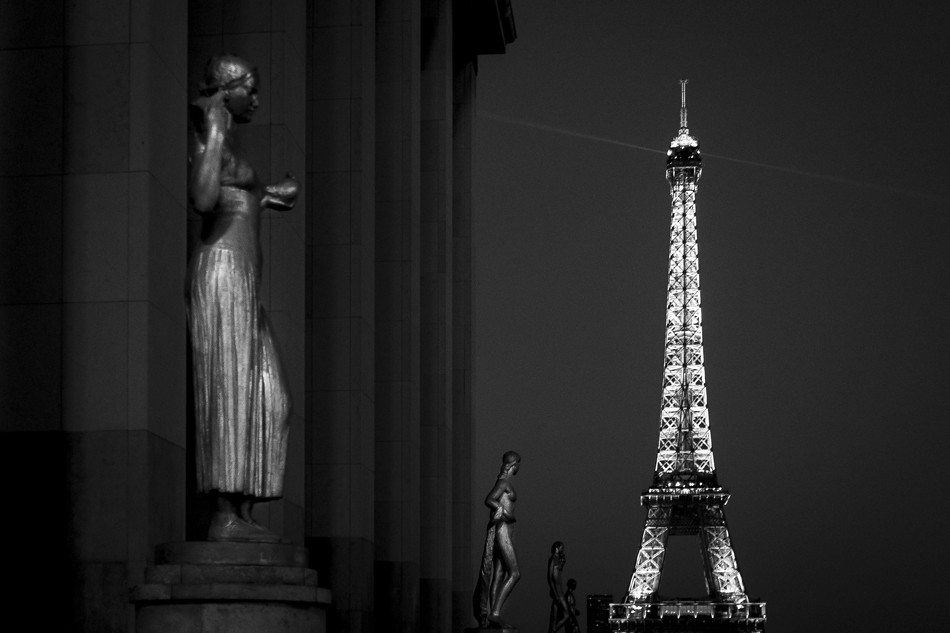 What challenges did you encounter while working to make this image?

The people were dancing on the lower level of the Trocadero Esplanade, which is like a big plaza with fountains on a lower level. To be able to put the tower in the background I had to get up against a wall. There was not much room between me and the dancers. The only camera I had with me was a Fuji X100s, which I was using as my walking around camera on this trip. Very low profile and good in low light. But of course it was way past sunset, so it was dark, I had no tripod and the dancers were moving.

How did you handle and overcome these problems?

Without a tripod or anything to use to brace the camera, I had no choice but take the low angle and put the camera on the ground. This of course make it difficult to frame the image since I could not look through the viewfinder. I had to make use of the LCD on the back of the camera. This was still a bit difficult since I had to tilt the camera up and I did not have enough room to also get low to see the LCD well. There was a bit of trial and error at the start to get the right angle.

Now, onto the moment. Can you talk about the moments leading up to the picture and also the actual moment. 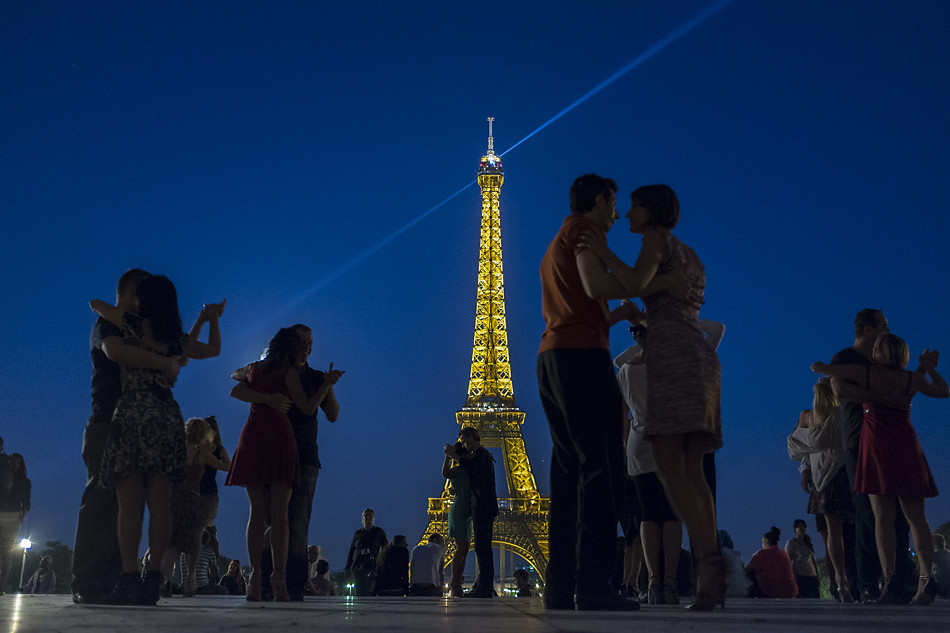 This was all pretty straightforward. A little experimentation led to the best exposure and then it was mainly a matter of trying to time the exposures when there was a clear view of the tower between the dancers. I settled on 1/30 of a second because I did not want too much blur, just enough to suggest motion. The lens was wide open at f2.0 and I set the ISO at 4000.

I shot a lot of frames. Maybe 100 or a bit more. I was using short bursts of 6 frames per second to ensure that I did not just miss a perfect frame due to bad timing. It was just too hard to watch that many moving couples and the tower and try to time a “moment.” It was a lot like shooting a football game in that regard.

This moment was simply the best of about 3 or 4 that I had captured.

In some ways, perhaps this was a relatively easy image to make for you, given your background as a trained photojournalist (a compliment to your skills as well!).  What lessons did you draw from this that can be applied to others? 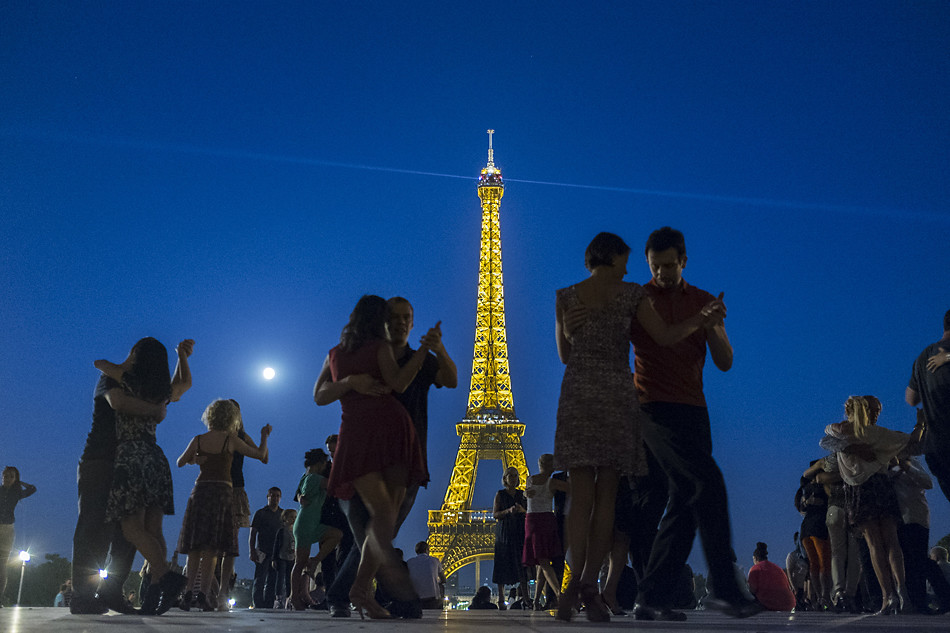 You mean other than listening to your spouse when she says there is something that you need to see?  (Laughing) Well, first of all as a photographer, I have tried to carry a camera with me as much as possible. I think we are tempted to leave it in the hotel, or at home sometimes so we can just go out and enjoy ourselves and the people we are with. But, this is an example of how I would have been kicking myself if I did not have a camera with me. The other thing is that when you come across something interesting, you don’t always have to just start shooting. Sometimes it pays to pause for a moment, take stock of the entire situation, and think it out.

You never know where or when you might find a memorable image that can end up bringing attention to you and your work. This image, made on vacation, won first place in the pictorial category in the Northern Short Course contest as well as the National Press Photographers Best of Photojournalism contest.

Besides, it also makes a nice framed print on our wall to remind us of our second honeymoon.

What have you learned about traveling abroad and photographing that you didn’t know when you began your career (people, cultures)

I have actually traveled quite a bit, but I think the one thing to remember, no matter where you are, is that some people don’t care if you are photographing them and then there are those that do. Some may just turn away and others may wave you off. Many are pleased to have you photograph them. But that said, on that same trip, I was actually yelled at by a man sitting outside of our cab as we were stopped at a light in Paris and I was making a photo.

He was not happy that I was taking his photo. An interesting encounter in a city that is considered the birthplace of street photography. I was aware that this might happen since there have been news reports of photographers being confronted in Paris by unhappy subjects.

In conclusion, what advice do you have for photographers?

Carry a camera as much as you can since you never know what you may come across. Also, be patient and be respectful of the people you are photographing. Since most photographers prefer to be behind the camera instead of in front of it, always consider how you would feel if a stranger was pointing their camera at you. It is always a good idea to research any foreign countries to which you may be traveling, to find out about the local customs. On a side note, I sold a print of that to a guy in Italy. He said his girlfriend is in the picture!

Pete Marovich has been working as a professional photographer for 30 years. He is currently working as an independent photojournalist based in the Washington, D.C. metro area. He contributes to Bloomberg, Getty Images, European PressPhoto Agency, UPI, The Boston Globe and The Washington Times. His photography has appeared in Time Magazine, Newsweek, The Financial Times, Christian Science Monitor, Esquire, The Wall Street Journal, Mother Jones and Sports Illustrated. His archive is represented by CORBIS.

Images from his coverage of the 2009 Presidential Inauguration were included in the Official Inaugural Book as well as being included in the permanent collection of the Smithsonian Museum of American History. Pete lives in the Washington, D.C. metro area with his wife, Jenny, and their two cats.

His work can be seen at www.petemarovichimages.com.

The image above, as well as a few others from his Paris trip, is available as a limited edition print here:
http://www.petemarovichimages.com/limited-edition-archival-prints/