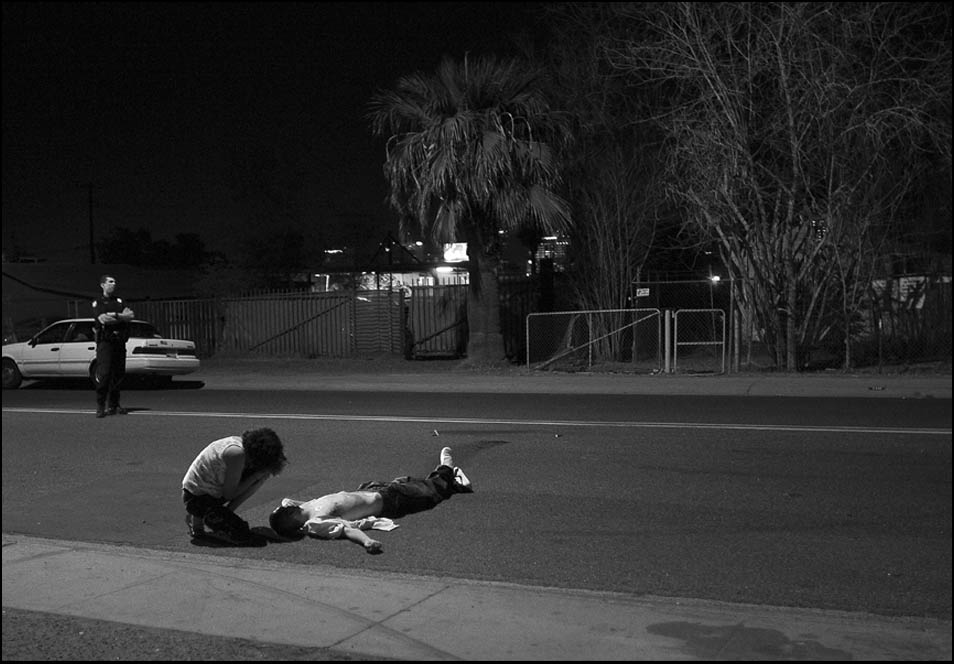 Nick, thanks for taking the time to speak with us.
This is such a powerful image. Can you talk a little
about the background of the picture?

Back in 2006, then-Arizona Republic reporter Judi Villa,
and I were shadowing a gang task force unit with Phoenix
Police Department. The story was focusing on how Phoenix
gangs were seeing an influx of members from Los Angeles.
We were working in neighborhoods just south of downtown
Phoenix when we heard from the police radio that shots had
been fired in a nearby predominately Hispanic neighborhood.

We were just a few blocks away from the scene. It was
pandemonium. A man had been shot. He was lying in
the middle of the road, dying of multiple gunshot wounds.
His friends and family were hunched over him, begging
him to not succumb to his wounds.

I asked the detective if I could approach the crime scene.
He said he would “take some heat,” but allowed me to take
photos because it was such an important story. Then the
detective told me that the man who had been shot was the
same man who just 10 minutes earlier had refused
to talk to me for our story.

I approached the scene. The man’s mother screamed, "Oh my
God, please don't leave me!" to her son, as she prayed over his
body. But it was too late - he was already gone. 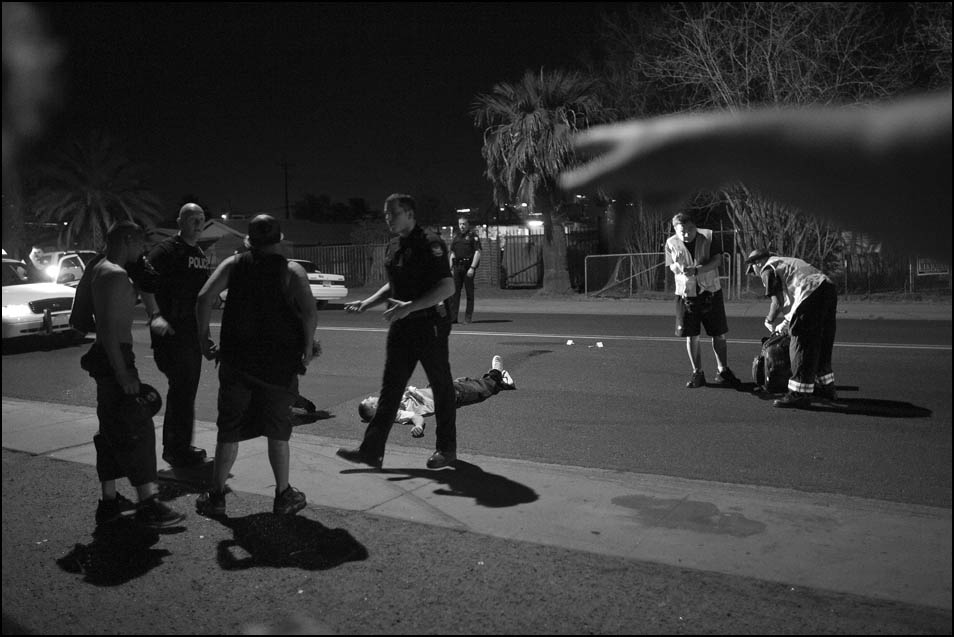 This image is part of a larger story, can you tell us
what was the origin of the story (how it was pitched
and began), and how long you worked on it?

The Republic’s Director of Photography, Mike Meister, put
full faith in me as the new kid on the block. It is very important
that your photo editors know your strength, instead of just
seeing who is available during the shift (I have always been one
of the "street guys," so this assignment was a good fit.}

At the time, I was just three months on the job, and didn’t know
the city’s neighborhoods well. Villa, who for years had reported
and written about crime in the Valley, pitched the story about a
resurgence of street gangs moving west from California to Phoenix.
Officials were reporting that the gangs were more violent and more
organized than before. So, we went with police for an 11-hour ride-along
to document the growing problem. 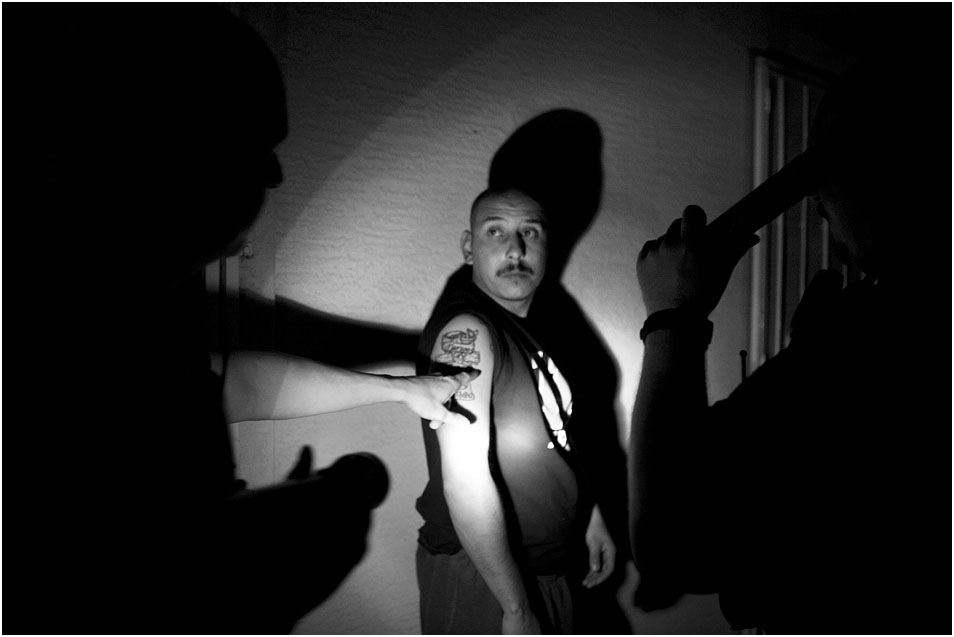 Along the way, we made several stops looking for
gang associates, and documented as the police
responded to crimes related to the gangs – including
a carjacking and a drug search in a suspected
gang banger's car. Villa and I worked on the story for
a week. Our work resulted in a front page
Sunday story and an online slideshow.

While reporting the story, I kept in touch with Grace
Villavicencio, the mother of Andrew Vargas, who had died.
She allowed me to document her as she visited her son’s
body at the morgue, the funeral home, at the cemetery
where he was buried, and later, she invited me to her home.

This picture below is very disturbing. Can you tell us what
is going on here, and how you managed to get the picture?

His mom called me on my cell phone and asked me if I wanted to join
her to see her son for the first time at the funeral home. It was the first time
I became emotional and I said, "Are you sure?" When I went to the morgue
the guys were yelling at me to get out but the mom said, "He's with me."
As soon as we got in the room I stayed behind. I was observing the scene,
and I started hearing a brother of the victim crying hard. This image was
when his mother was explaining what happened. Vargas said,
to her son Kiki, "Look what happen to your brother. They were trying to kill
you and now your brother is laying for you." It was such a surreal, dark, scene.

I hid my face behind the camera so they couldn't see my emotion.

One of the things I admired most about your coverage of this,
was how much you stuck with it. You eventually covered the
funeral of the person who was shot. How did you gain access?

It was simple, they actually called me to let me know about
the wake. I had earned their trust enough for them to call me. 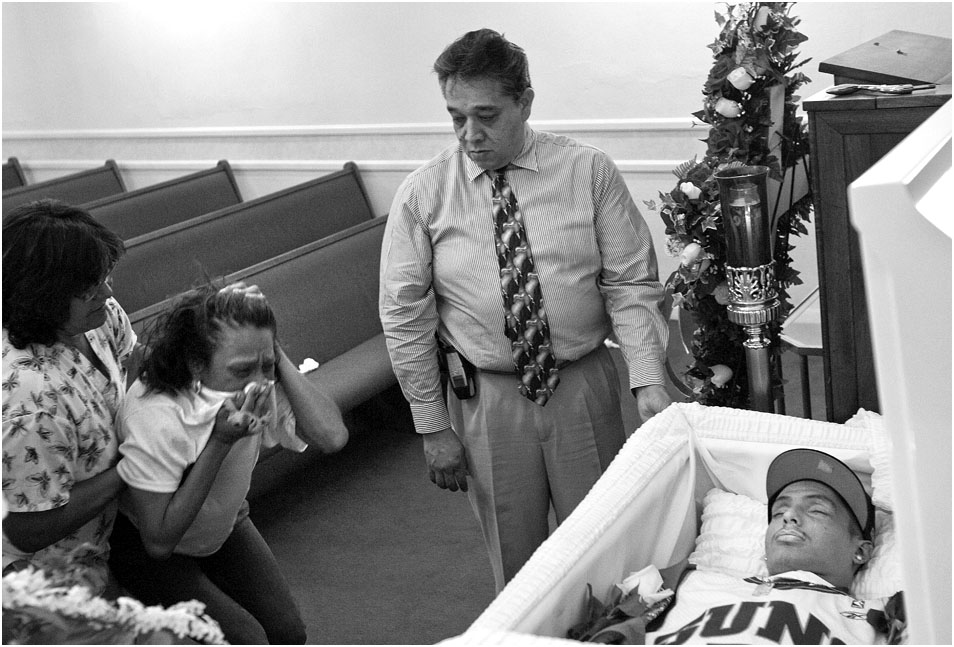 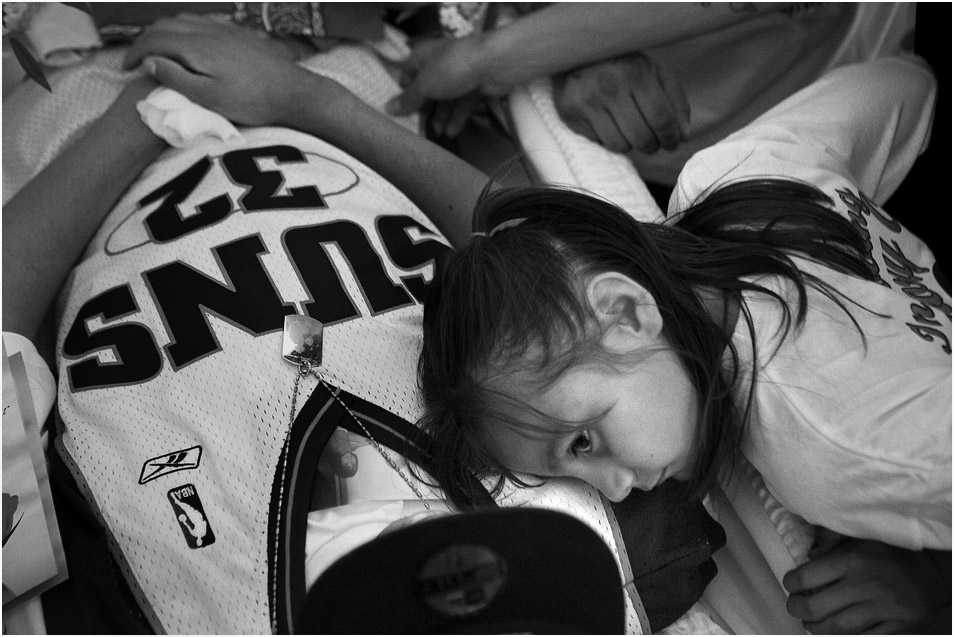 What was your approach to this story?

I wanted to tell the story of a mother’s grief from her
point of view. Oftentimes, gang related stories are
told from the point of view of law enforcement, and
too often, the emotion behind the story – the gut-
wrenching grief of a family – is untold.

I set out to tell that story. I immediately got to work
to try to get to know the mother. Two days after the
shooting, I returned to the street where the man died.
I wanted to see where he came from, where he lived,
who his family was. Neighbors directed me to his mom’s
house. I knocked on the door, and made my pitch: I
wanted to illustrate how Phoenix’s gang problems
affected her family, and tell the story through their eyes. 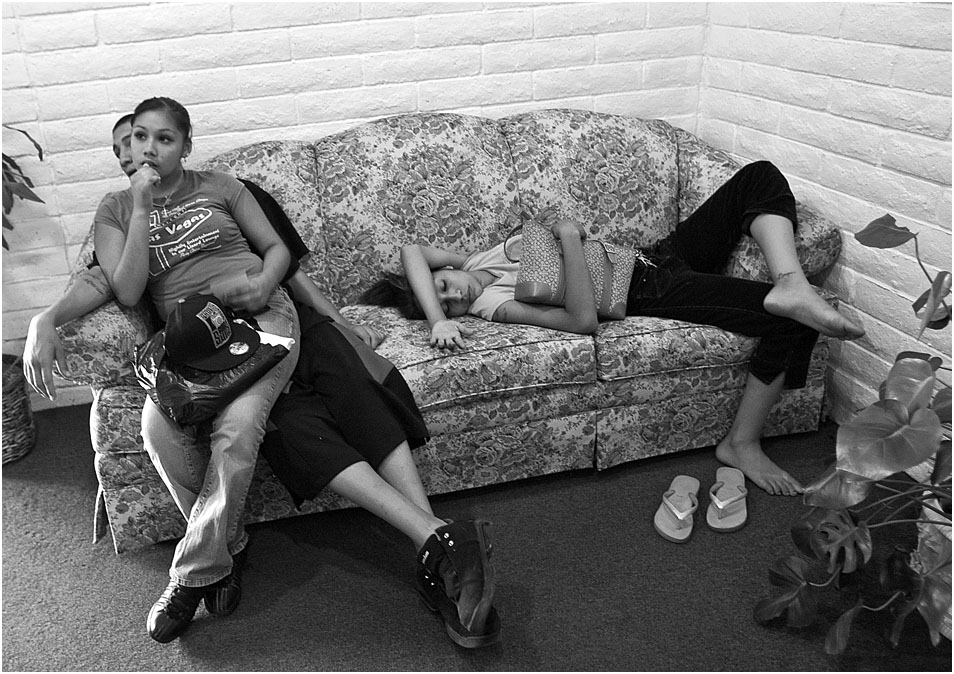 She said she remembered me as being respectful at the
crime scene. She invited me into her home, showed me
her son’s room, and talked with me about her son, and
how he became a gang member. Since she was willing
to tell her story, others were, too. That credibility allowed
me to “work the streets” and find other gang members
who talked with us for the story.

Ok, now onto the image itself. Tell us what led up to the
image, and what was going on in the moment.

The crime scene was very surreal.

Over the years, I have covered emotional scenes. I’ve seen
people die in combat. I’ve photographed many murder scenes.
But this one was different knowing that I had just spoken to
the victim a few minutes earlier. (Later I learned from police
that the man was not even the intended target. The gang
members meant to shoot his brother).

On the scene, I heard two young men swearing and asking
the victim to not give up. The mom was crouched over her
son, crying. And the cops were trying to gather information
from witnesses and the man’s sisters. 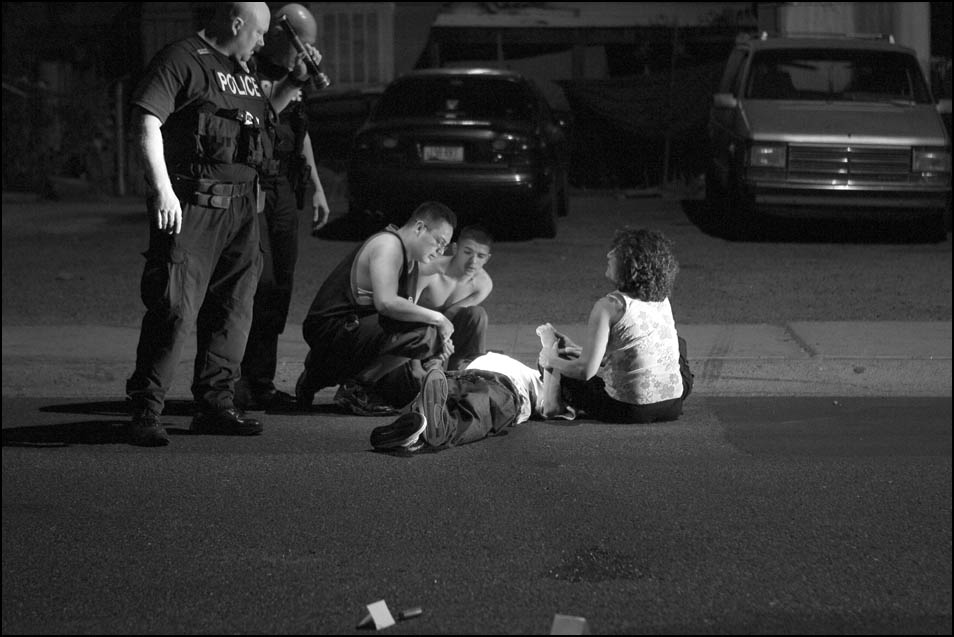 It was a very sad scene. What shook me the most was the
way the mother was sobbing over the loss of her child. I’ll
never forget it. She was cradling her son’s upper body, rocking
him back and forth. As a father to a young child, I cannot
imagine losing my child in an instant – and so traumatically.

The memories of that day will haunt me forever.

Were there any points of conflict or struggle during the
making of this picture, and how did you handle it?

The biggest challenge in getting this photo was getting the
police to allow me to take pictures of the body. Because of the
sensitive nature of the scene, I had to stress to the
detective that the public had a right to know what was
happening. While sad, the man’s death illustrated the point
of the story: that increased gang activity was leading to more
crime and violence in certain areas of the city.

At first, the detective would not allow me to take photos. After
some back-and-forth on the issue, the detective finally allowed
to me to shoot photos, saying, “I’ll take the heat.” And he later did.
The detective also asked that I take only tasteful photos. I only
shot half a dozen frames - the least amount of photos I’ve ever
shot on any assignment. 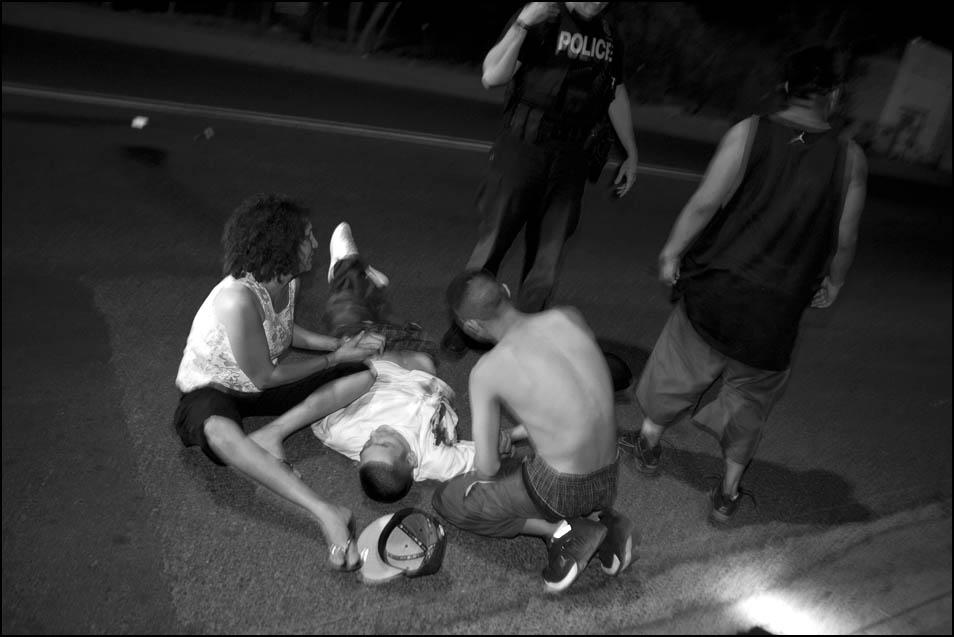 Also some of the gang members and their friends were not happy
that I was there taking photos. But as time wore on, they grew
tolerant of me and didn’t get in my way. The lesson I learned there
is that patience and respect will overcome almost any story.

What was the reaction after the image was published?

The images of that scene were very powerful. Response came
in from within and outside of the newspaper, saying that the
photos captured the mother’s grief. I heard from the family,
police, neighborhood activists, and my peers.

I'm sure this was a tough moment, and story, to work on.
What lessons did you learn from this experience?

This story really instilled my belief that if you are honest,
persistent and respectful, you can work your way into any story.
When working on such sensitive stories, you often have only your
gut to rely on – those feelings that tell you to either keep pushing,
or stop pushing.

In conclusion, what advice do you have for photographers to
get access to such moments, and also how to handle it
once you get access?

Oftentimes, photographers get stuck in the mindset that they
must quickly find photos and move on to the next assignment.
But I work on the philosophy that photography is a craft – a
means of exploration. Just work it and success will come.

You said, "I work on the philosophy that photography is a
craft - a means of exploration." Can you please elaborate?

We as a photographer are too often driven by the narcissistic values
stemming from competition. Instead of focusing on this, I think we need
to explore and understand life issues more, as well as put yourself on
the other side of camera (imaging yourself in the shoes of others).

Next week we'll take a peek into celebrity portraiture with
this image of U2's Bono by Jay Clendenin of the Los Angeles Times. 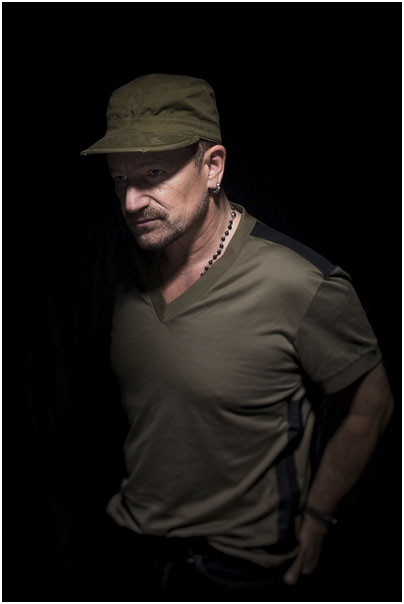 For FAQ about the blog go to: