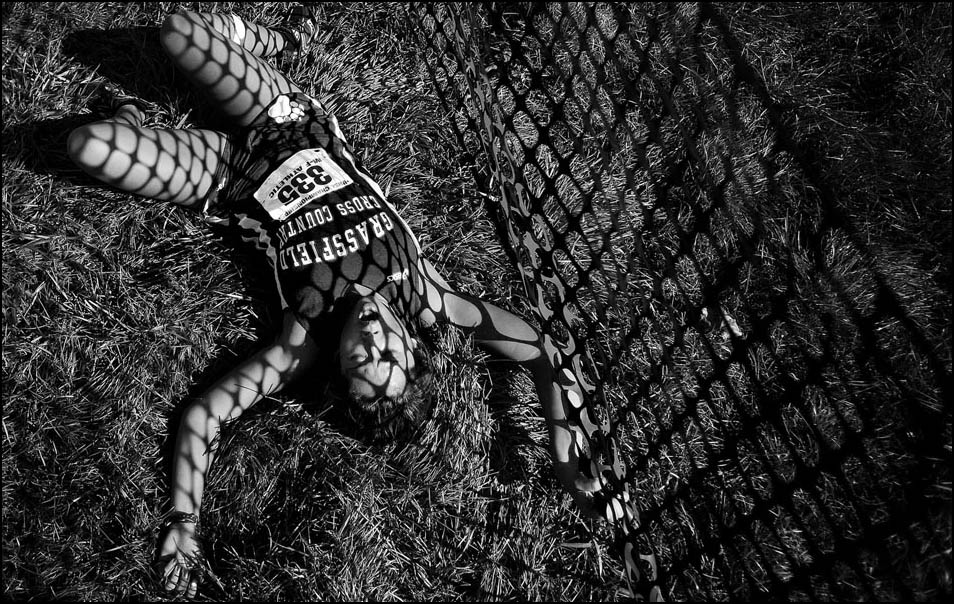 TID:
Kyle, what a great picture. When I first saw this image, I wanted to immediately know more about how it was made.
KYLE:
Thanks for letting me be a part of this project. I want to print out copies of the previous ones and hand them to aspiring photojournalists and say, “This is what I wish people would have taught me. Not just the technical part of making a picture but what is going on in your mind to put you there. This is the important stuff.”
This picture came about in the course of a day-long shoot covering the VHSL State High School State Cross Country Championships in The Plains, Virginia. I had been shooting college football for the past 10 weeks and was originally scheduled to be in Charlottesville covering a University of Virginia game. About 10 weeks into any sports season you are excited to see something else in your viewfinder. I hadn’t shot cross country for a couple of years, so I felt like I was going in with a pretty fresh set of eyes. We had several local teams in contention for state titles and a couple of runners who had a chance to place highly. Our sports department was running the story as the sports front. We also had an inside page. I thought I would need about 5-7 good pictures.
TID:
Scores of people were at this event, correct? Why did you focus your energy to this one space?
KYLE:
There were tons of runners, over a thousand, and a few volunteers, but the media presence there was pretty sparse. Probably about 6 or 7 other photographers and maybe one was from a newspaper. Most of the other photographers were up getting shots of the finish line, so I didn’t have to worry much about getting in someone’s shot. The crowds were kept back behind a large wooden fence (the venue is a horse steeplechase course), so where this picture was made, I had to deal with about 250 runners crossing the finish line per race and about 8 volunteers who were helping at the finish. I would say visual chaos is a good way to describe it. 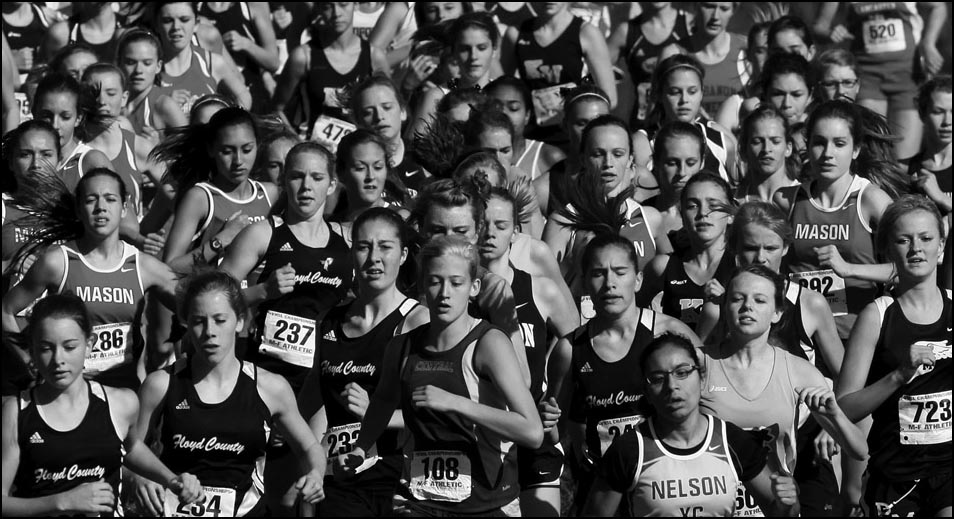 Since I had never shot at this venue, I didn’t have much of an idea of where the shots would be, so the writer, Mark Taylor and I walked the course beforehand and talked about where we thought interesting shots could be made. Mark and I are both runners and the course was set up so that if I hustled, I could shoot at four spots during each race. I had a pretty clean shot at the start and the first quarter mile. There was a nice hill shot about mile one. Then the runners had to cross a creek at mile two, then I had to run back to the finish line for the end of the race. The first runners crossed the finish line in a little over 15 minutes, so there was quite a bit of running on my part. 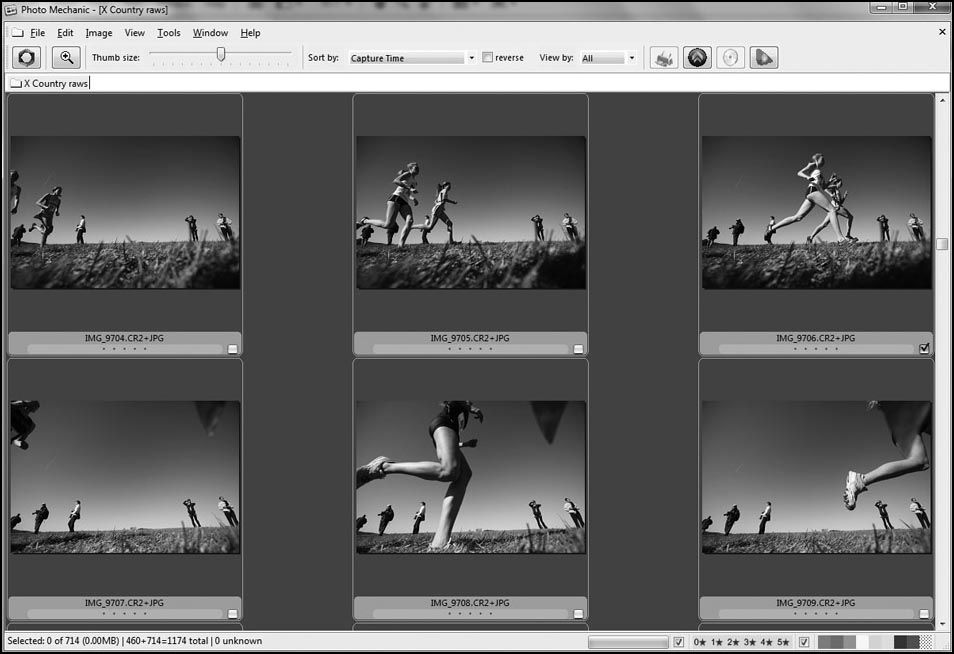 After shooting the finish line of the first race, I knew I would be able to make a picture here later. The sheer amount of runners hitting the ground was amazing. The runners who where still standing were almost zombies. The volunteers were asking the finishers if they knew their own names and were getting a blank stare. I had a few other ideas for good shots, but I knew this scene would probably end up being the best.
TID:
Were there any points of conflict or struggle during the making of this picture, and how did you handle it?
KYLE:
The main conflict on the technical side was coming into a venue that I hadn’t been to before, coupled with the fact that I was shooting a sport I hadn’t shot in a while. I try to pre-visualize what my pictures are going to look like, but because everything was so new to me, it was hard to know what to expect. Mark had shot this the previous year and was really helpful describing how the run would flow from start to finish. One thing I will tell aspiring photojournalists is to use the resources available to you. Ask the writer what the compelling story lines are, who are the important characters, what should you be focusing on, etc…
The time you spend questioning will pay off in better pictures. Besides the technical issues, I think the hardest part was finding a quiet moment in the visual chaos. So many runners were crossing the finish line and they just kept coming and coming and coming. As a photojournalist you have to be able to make sense out of chaos and focus on moments. 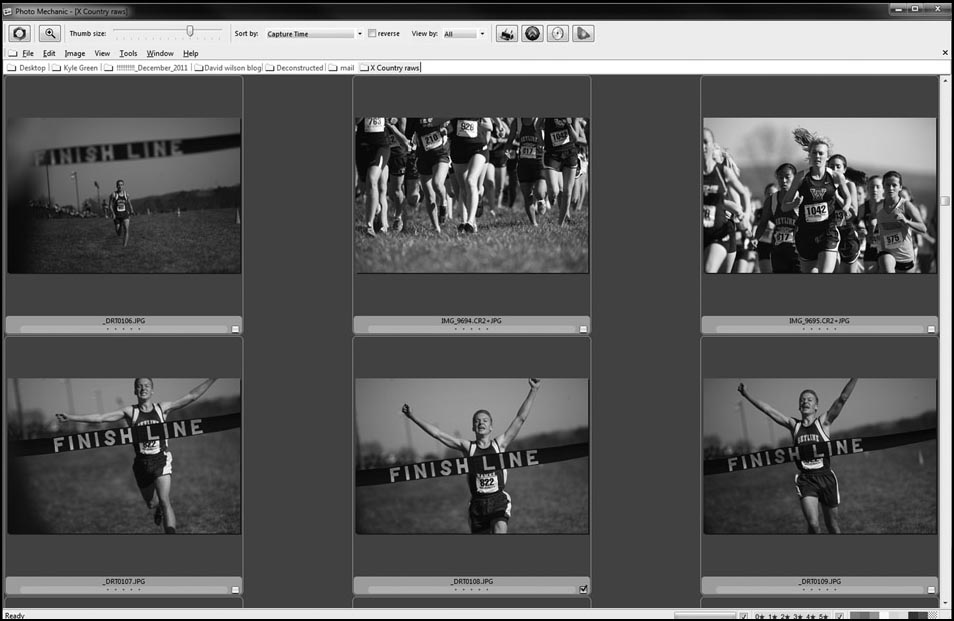 I had two options, either make a super layered picture or try to single out one runner and make it as clean as I could. I put down my secondary camera and just went with one body with a 24-70. I think every picture has a bit of luck in it. This picture did as well. I was making my way through the finishers. This particular runner was in a position where I could get a somewhat clean picture. In the raw image, you can see there were other runners in the frame, but out wide enough that I could crop them and just focus on her exhaustion. She was down for only about 10-15 seconds and then her teammates helped her to her feet and she was gone. I shot some layered pictures too, but none that came together as well as this picture.
TID:
What lessons did you learn from making this image?
KYLE:
I learned this earlier in my career and applied it here: do not be afraid to document the emotional moment in front of you. Earlier in my career, I would have been hesitant to shoot an athlete in this kind of vulnerable position, but about 5 years ago I took a picture similar to this and the girl's mother called and told me how much she loved the picture. “It’s so Jackie,” she said “Oh, the pain!” and laughed. She said they ordered a large print and have it hanging in their living room. I always think that the athlete will have one of my pictures and when they are 60, they will say, “That was me when I was young. I am glad there was someone there to capture this moment.” As a visual journalist you have to capture the full spectrum of the human experience, from the saddest moments of someone’s life to the happiest. You try to keep your cool when there is chaos and do your best to disassociate yourself from the emotion around you.
TID:
Ok, now onto the image itself. Tell us what led up to the moment and what you were thinking as you made the picture.
KYLE:
This picture was made after I had already gotten all of the daily shots I needed for Mark’s article in sports and I felt like I had a good visual report from the day. I was able to freelance and just look for moments at this point. After watching the previous races and seeing the volunteers literally dragging runners away, I decided to focus on this aspect of the race. I have shot races before where one or two runners went down, but I was blown away by the carnage at the finish line.
I overheard one of the race officials talking to the volunteers to be ready at the next race, because the previous year there had been a large amount of bodies pile up. So, I just waited at the finish line and didn’t worry about the winners and just focused on documenting the pain. I like this picture because it is clean and simple; the light on her face and body from the fence is compelling. I just love the look on her face and her hand gripping the fence. I want to push myself this hard. 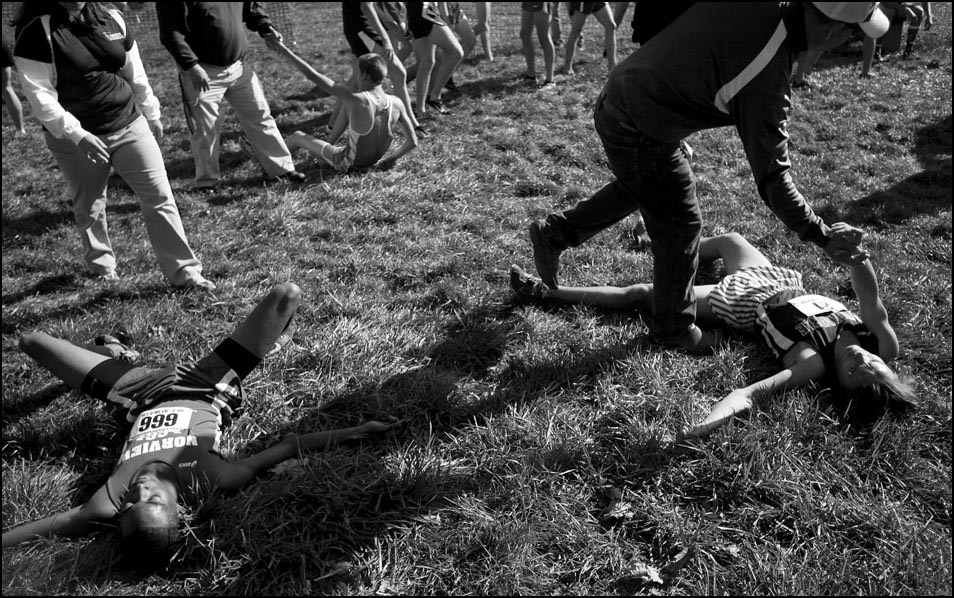 I love shooting high school sports. The athletes aren’t competing for anything other than the love for their sport. They push themselves as hard as they can and sometimes harder than their bodies can stand. I love how the game means so much to them.
Earlier in my career, I was so enamored with the peak action part of sports photography that I missed out on some of the moments. I was focused so much on what happens inside the box that I was missing some of the emotion and beauty outside of it. When I worked in Oregon, I got to know Bruce Ely and Sol Neelman and their view on sports photography really changed how I shot sports. I loved their moment-based approach. Now, I find myself seeking out the moment of victory or defeat more. I feel as though I get more out of my sports photography because of it. 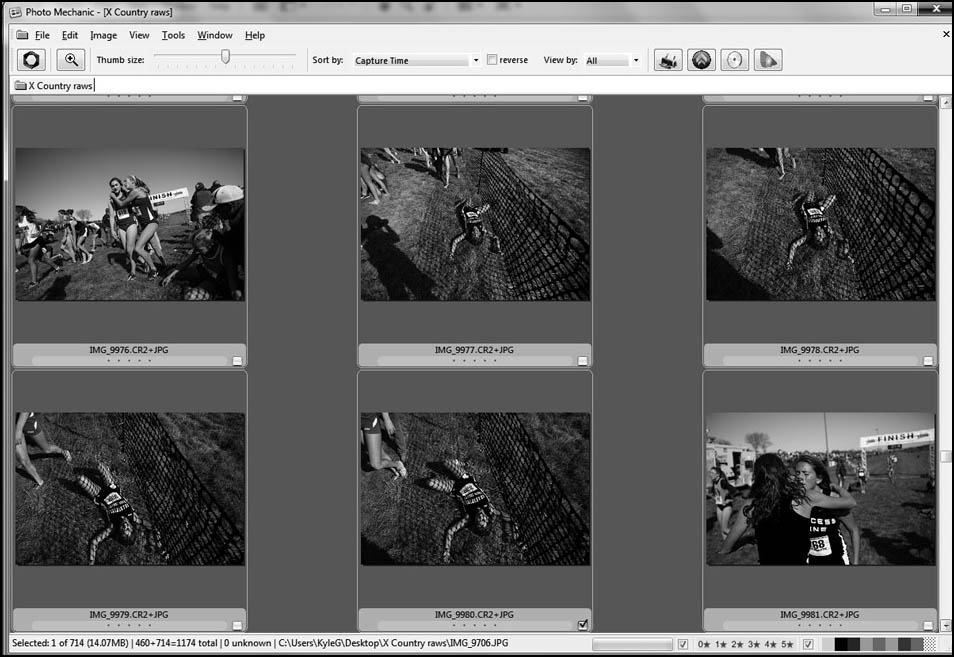 TID:
What surprised you about the experience?
KYLE:
I think I was surprised that there were so many opportunities for pictures with different looks and feels. I was envisioning a bunch of finish line celebration shots, but was surprised that there was an even wider range of photo possibilities. In my head I was thinking of cross-country skiing, where the athletes take off from the finish line, then return, and that is all you ever see. As a photojournalist, you have to keep an open mind, not judge an event before it happens. Even the most boring of assignments can surprise you, and even the most visually rich can have their challenges. I can’t wait to go back and shoot it again next year.
TID:
In conclusion, what advice do you have for photographers to keep their cool in chaotic situations?
KYLE:
In photojournalism you have to do this type of thing all the time. You walk into chaos and have to distill it down to a moment. As you do more photojournalism, this becomes somewhat second nature. Be quiet, look for moments, and don’t be afraid to fail. I took over 700 pictures that day and I really like about 10 shots. I failed a bunch that day, but you have to accept that. I kept thinking and changing my angle, lens, position, and eventually it all worked out. Be prepared to think on the fly, because a moment like this doesn’t just happen in front of you, you have to be seeking it out and prepared to make a compelling frame when it does. From a philosophy standpoint, I would say shoot what makes you happy. What pictures of yours do you go back and look at over and over again? What matters most to you? Is it the moment of victory or the aftermath that the quest leaves behind? Both are beautiful in their own way. Find what you love and shoot it. 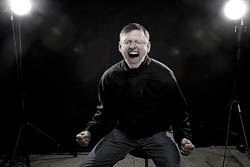 Kyle Green began his photography career at the University of Utah, where he was a communications major. Green's first internship was at the Los Angeles Times, followed by a second internship at the Vancouver (Washington) Columbian. Green's first staff job was at the Portland (Oregon) Tribune, a bi-weekly paper, where he worked for 5 years. Green has been at The Roanoke Times , for the last 6 years. He has been the NPPA Region 3 photographer of the year 3 times and the VNPA photographer of the year twice. He has won awards in CPOY, POYI, BOP. Green is also listed on Sports Shooter where you can find out more about him. Green lives in southwest Virginia with his wife, Heidi and two children, London, 5, and Sedona, 2.
+++
Next week we'll explore this powerful image from Josh Trujillo
from the Occupy Seattle movement: 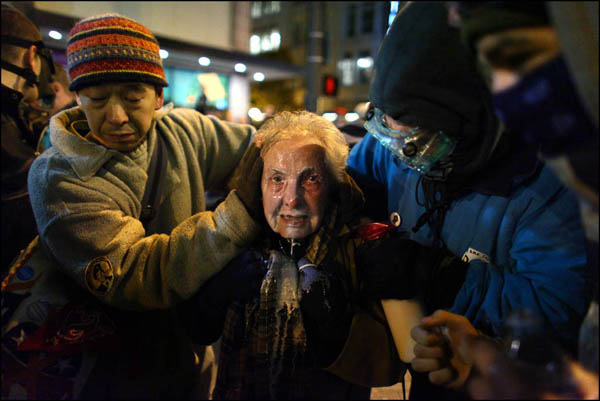