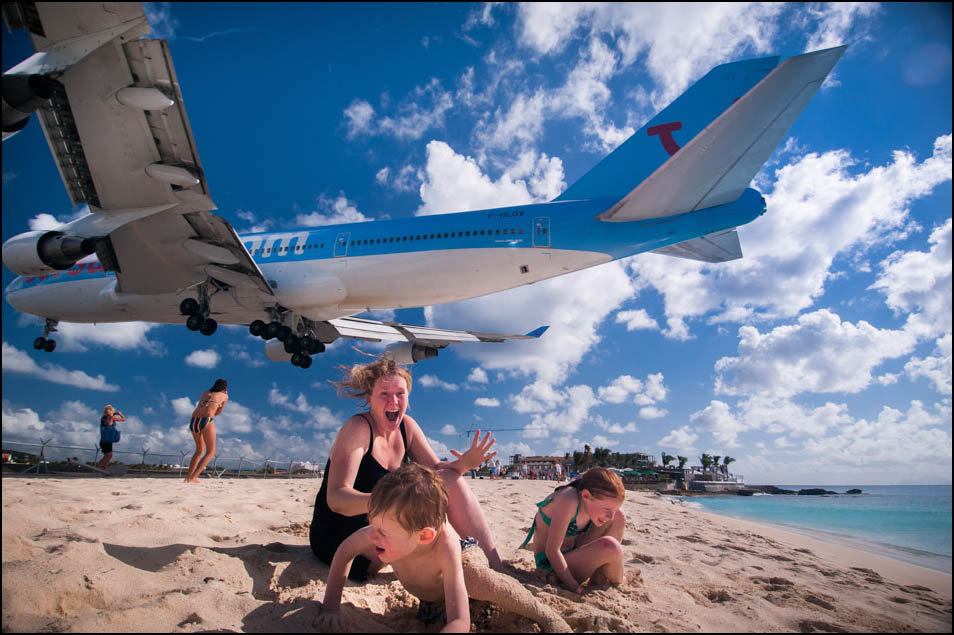 TID:
Wow! What an image. I saw this recently thumbing through a magazine. It's so crazy; I thought at first it was a created shoot for an advertisement. When I realized it wasn't, I knew we'd love to learn more about how this was made.
KENT:
First, thank you so much for including my photo in this amazing body of work.
It’s interesting. Most do react to this photo with doubt at first. Is Kent an expert at manipulating images using Photoshop? The answer is no, but the sad part is that in this day and age of digital photography; the common reaction is to ask if it’s real. Twenty years ago, the question would not likely come to mind.
The reality is that this is not Kokomo (yes, I’m showing my age with a Beach Boys reference). It’s St. Maarten, the home of the famous Princess Juliana International Airport. At only 7,980 feet, the runway is barely long enough for large jets to land. Incoming airliners approaching the island, must touchdown at the very beginning of the runway, which is just past the beach. This means they have to fly extremely low, passing only 30-60 feet over tourists and plane spotters. 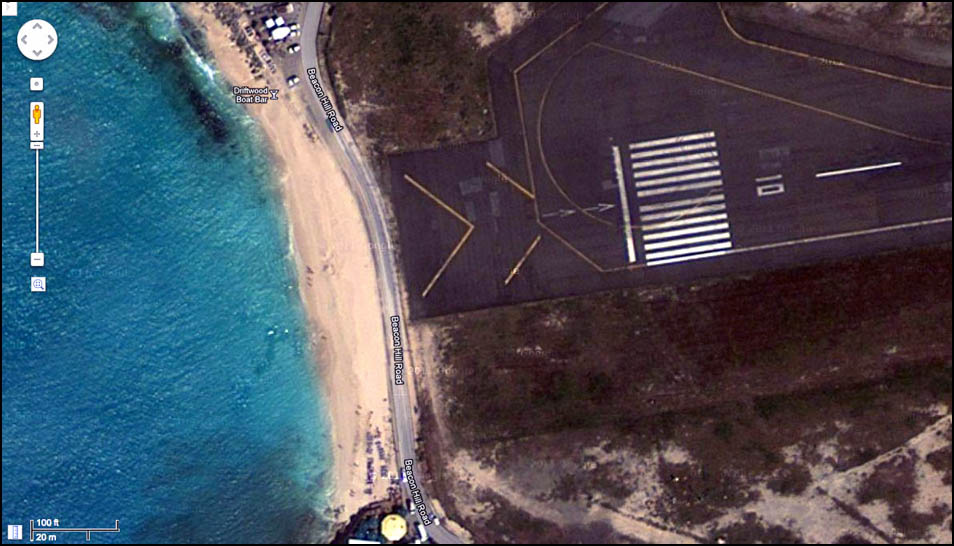 (image from Google maps)
TID:
How did you prepare for this shoot, or what did you do to put yourself in place to make this happen?
KENT:
My dad took me planespotting when I was a kid. He knew the best places to go to see planes flying their lowest. We were taken with the idea that something so large and heavy could fly so gracefully and appear to be suspended in midair.
So when my wife planned a cruising vacation in the Caribbean, she told me about St. Julianna airport in St. Maarten. After seeing images from the scene of low flying planes over the beach, I knew I had to go there. I think I wasn't intentionally looking for this exact picture, but I knew I wanted to get something fun.
TID:
What challenges did you encounter while working to make this image?
KENT:
The challenge for me was to make a photo that was not typical for the scene. There are lots of shots out there, photographed from a distance, that show the scene of a huge airliner above tiny beach-goers. They all look really cool but I wanted to make a photo that was unique. I wanted to show what it actually feels like to be there. I also tried with a long lens, but I couldn't get far enough back. 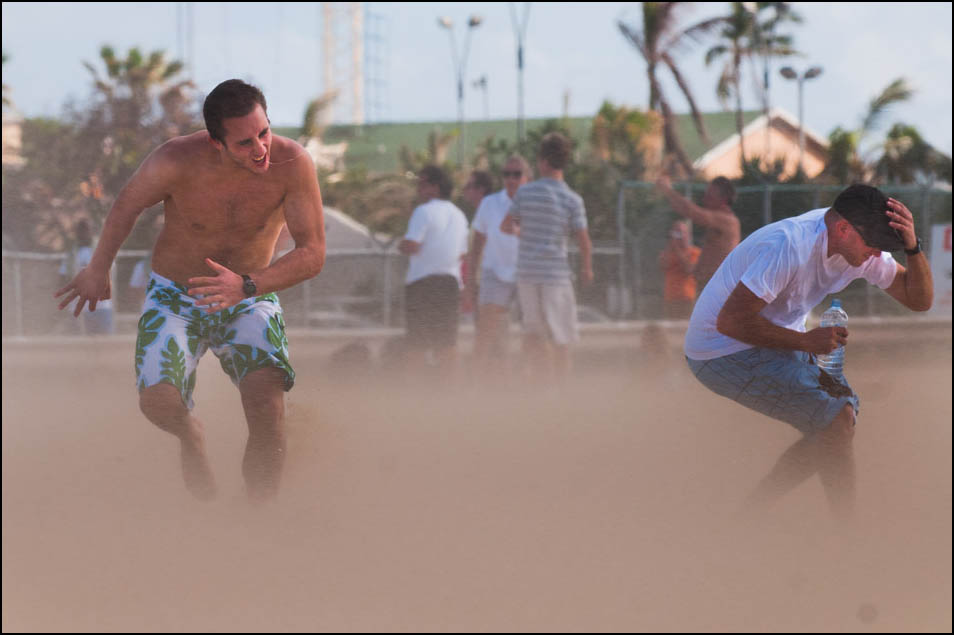 TID:
How did you handle and overcome these problems?
KENT:
I focused on people reacting to the scene rather than the scene itself. I shot people getting blown off their feet under the aircraft. I shot people running from the spit of the sand blasting on their flesh. There were a lot of jetliners coming in that day, and a lot of commuter jets. I left enough room over their heads to keep the planes in the background. I was just really lucky to be in that place and time when the 747 Jumbo Jet came in. I think we felt like we were in a very safe place to make that picture then, but when it came in it was like a shock. It took my breath away. It was like, "Oh my god."
TID:
Now, onto the moment. Can you talk about the moments leading up to the picture and also the actual moment? 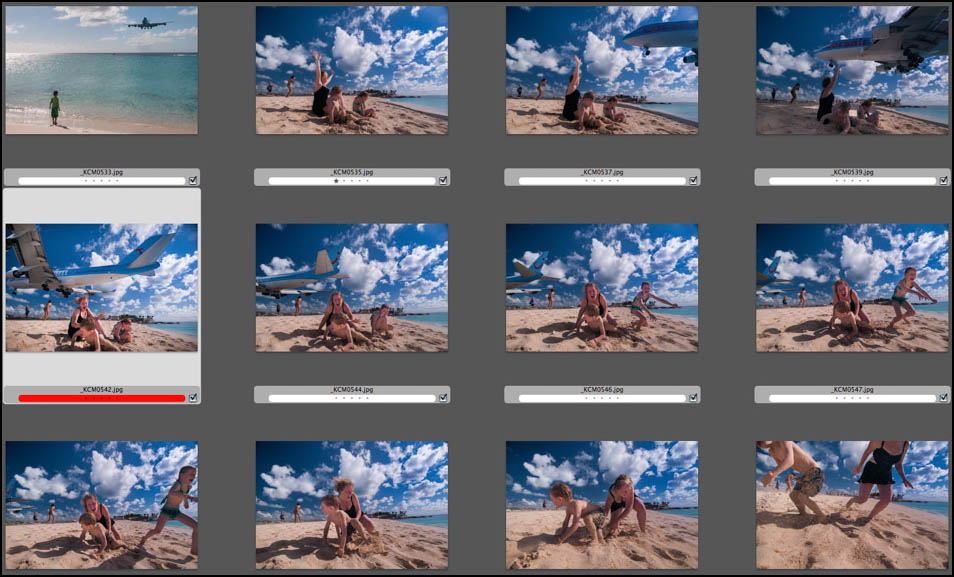 KENT:
My family was sitting on the beach thinking they were at a safe distance considering all of the jets until this moment were smaller 727 type jetliners.
I made a photo of the jet coming in with a child in the foreground. Because I shot the picture quickly I still didn’t realize it was a Boeing 747 Jumbo Jet.
Then I turned the camera on my family. I framed them in the foreground with room above them guessing where the plane would come in. As soon as the plane approached, I laid down on my motor drive. That’s when it happened. It shook us to our core as a thunderous earth-shaking roar blasted particles of sand, each feeling like a bullet pelting our skin. For a moment I was concerned about my camera, but I let that go. I instinctively held my ground and kept shooting as they seemingly ran for their lives past me. That one moment tells the best story. 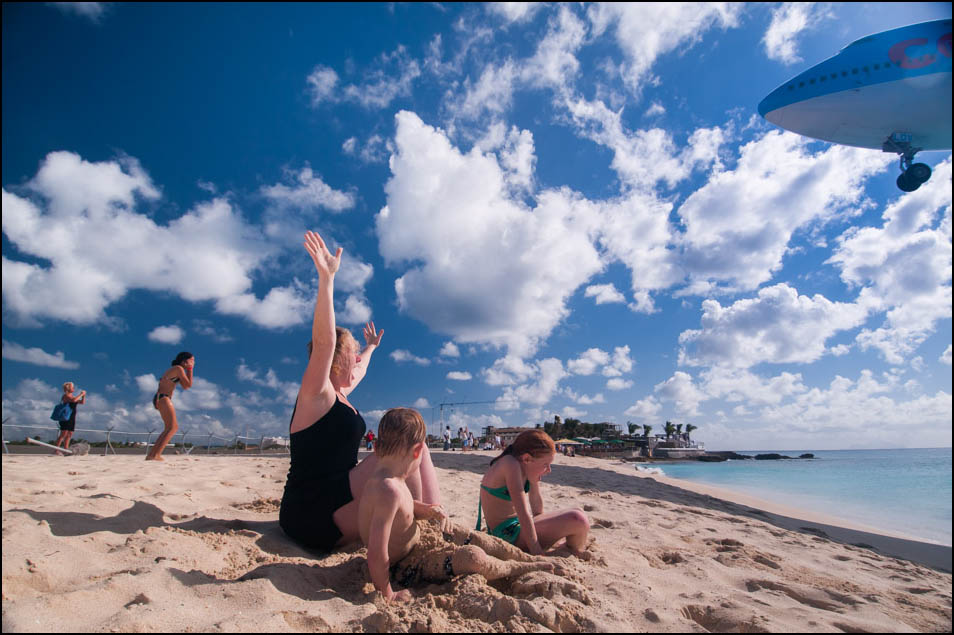 TID:
What surprised you about the moment that you weren't expecting?
KENT:
The 747 Jumbo Jet was the surprise. It was unbelievable! I had seen and felt plenty of 727 sized planes that afternoon but nothing compared to the sound, site and feeling of the 747. I found out later that 747s only fly over twice a week during peak season. They are owned by the French carrier, Corsair. I was quite lucky that day.
TID:
What have you learned about yourself in the process of making images like this?
KENT:
The experience reinforced the idea that I didn’t take the photo with my mind. My body shot that picture. It was all instinct. In the earlier days, after several years of shooting, I found that in key situations my instincts took over. When I looked at my film, I wondered who shot that picture? I’m sure some of your readers have had this experience. It’s quite magical. It’s an involuntary reflex like typing on a keyboard. Typing takes lots of practice. You get to a point that you don’t have to think about each strike of the key. It’s the same with photography. The mind does not have time to react. It’s the body. My reflex was to stay and shoot that moment and not flee. You can see the subjects fleeing and freaking. That was their involuntary reflex. I reacted differently because I had a camera in my hands. 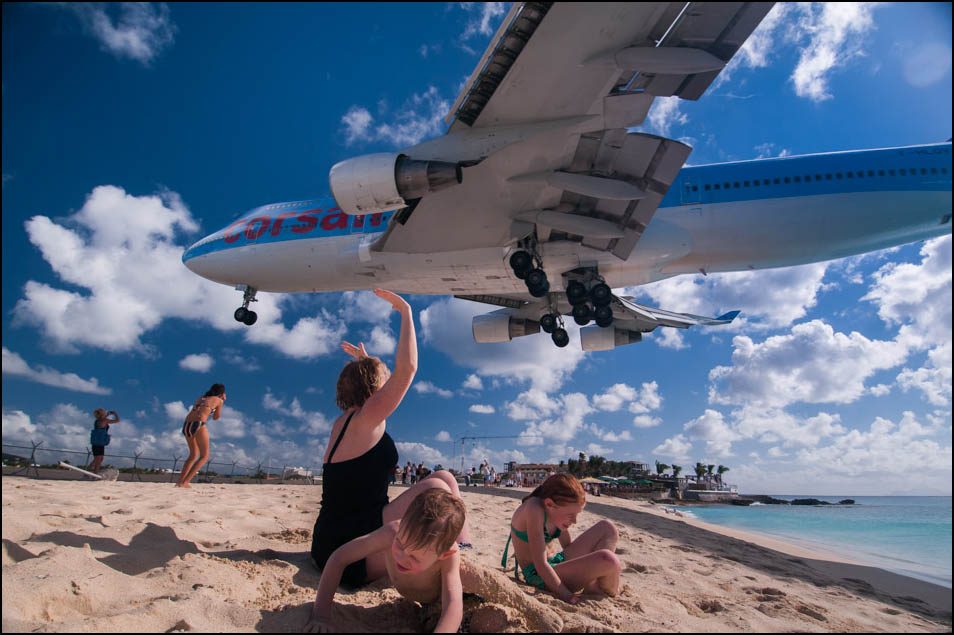 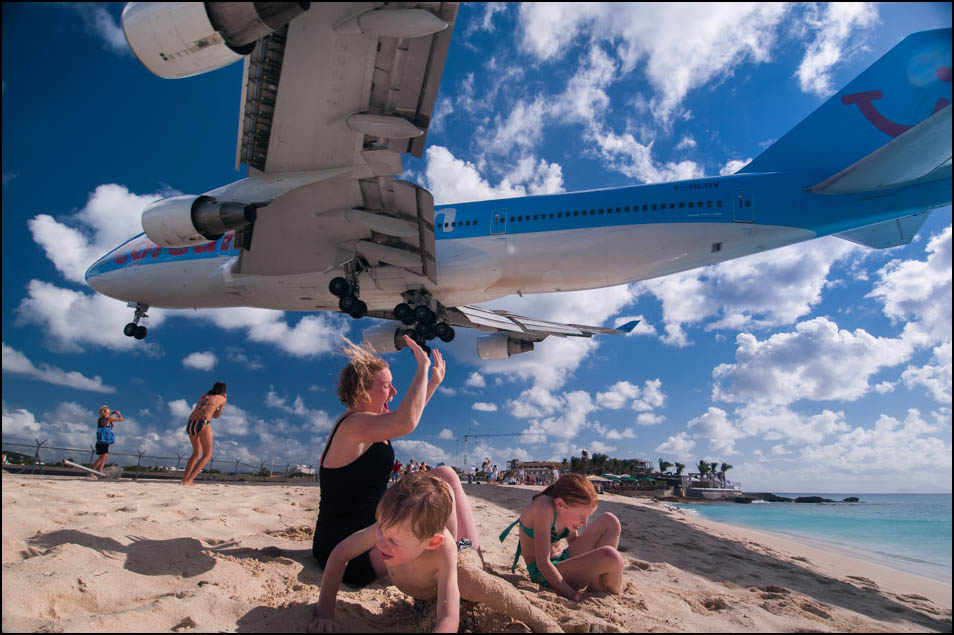 TID:
In conclusion, what advice do you have for photographers?
KENT:
Put yourself in a position to make great photos. You don’t have to travel long distances to do this. Talk to family and friends. Talk with strangers. Be inquisitive. Find a project about a topic that you are passionate about and work on it for weeks or months. Shoot a lot. When you shoot a lot the odds move in your favor. In this case, I was lucky that a 747 passed over when it did.
To be prepared to be lucky takes a lot of experience. You have to shoot a lot to get to the point where you sense images with your heart rather than with your mind.
This is where where the mechanism of the years of experience becomes intuition. It takes a lot of practice to anticipate moments, but with time it becomes something that just happens.

Kent Miller has been an assistant professor of photojournalism and digital media at Central Michigan University since August 2004. His students have placed CMU fourth or fifth overall, in the nation for the Hearst Journalism Awards Program over the past three years.
Miller’s photography has been published worldwide in numerous magazines, newspapers and books including, Nat Geo France, Germany’s View Magazine, England’s Loaded Magazine, Australia’s The Who Weekly, Newsweek, People, USA TODAY, The New York Times, The Los Angeles Times and The Detroit Free Press. Elements of Kent’s photographs were used by the U.S. Mint for the tail-side design of Alaska’s America the Beautiful United States quarter, which will be released in November 2012.
Over the course of his career, Miller has won over 40 international, national and state awards for his photography from organizations including National Geographic, The Wilderness Society and Photo District News.
His ongoing photographic project since 2008 is to document the beauty, the wildlife, and the people who visit Alaska’s national parks. Kent also used his trips to Alaska to establish a Central Michigan University internship program at three national parks.
http://kentmiller.com