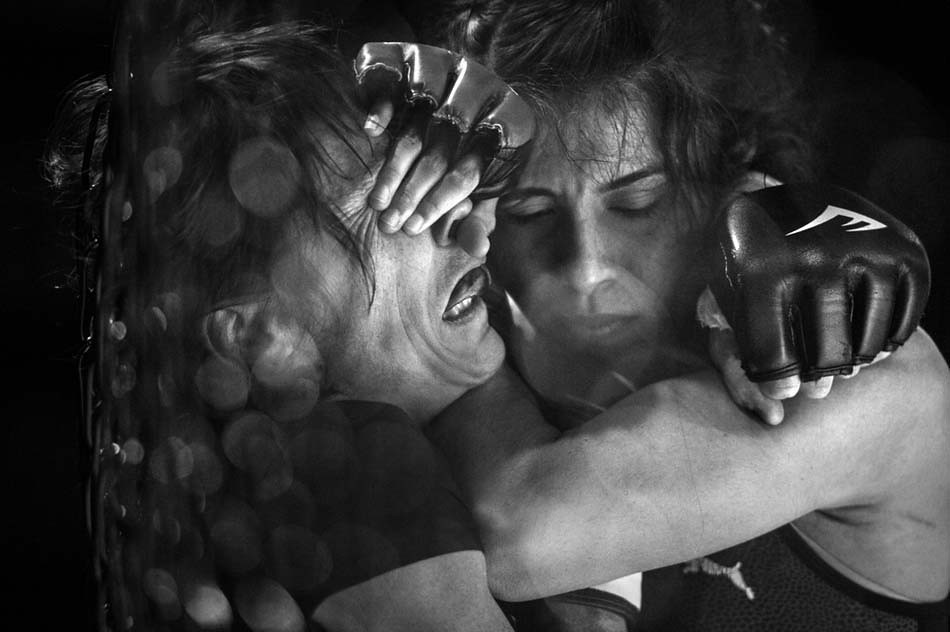 TID:
Ah, Julia! What a fantastic image. When I saw this on your Facebook feed, I was hoping you’d be up for an interview. Can you tell us a little about the image?
JULIA:
Disclaimer: I don’t know as much as I should about MMA so forgive me if I mess up specific terminology.
The photo is from Intense Championship Fighting 22: Tough Enough To Fight In Pink. It’s breast cancer awareness month, so some of the proceeds went to support a local hospital’s healthcare program. It was unusual for me in that 4 of the 9 bouts were between women. In the past I had only seen men’s MMA and boxing in person.
This was a professional atomweight bout featuring 20-year-old Shino Vanhoose of Boise and 52-year-old Jody Lynn Reichel of New Jersey. It was intriguing to see such a wide age gap between competitors.
The event didn’t start until 7:45 and I had an 8:30 deadline. I shot the first three fights from a platform on an outside corner of the octagon then ran to file photos from my laptop. Since I’m a fairly inexperienced sports photographer, I didn’t want to risk not getting something before deadline.  Shooting from the floor makes focusing tricky sometimes. After that, I was technically done working but I love watching the fights so I stayed and intermittently shot and watched the remaining matches kneeling on the concrete next to the octagon. 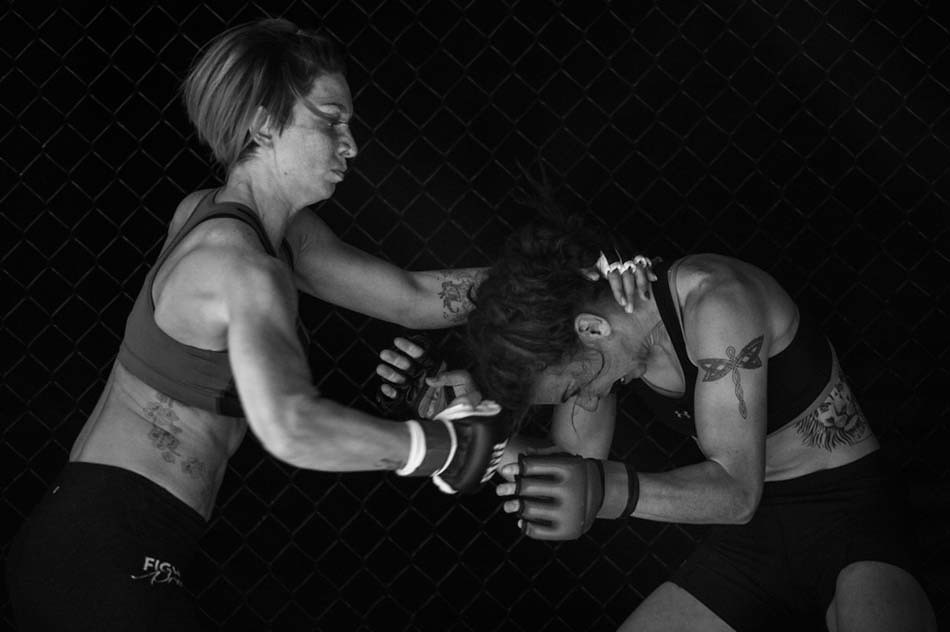 TID:
I just love the light in this photograph. Can you talk about the technical aspect of it, and how you set yourself in a position to capitalize on it?
JULIA:
Professional combat sports are some of my favorite things to shoot for that reason. They’re usually lit so dramatically. Spotlights surrounding the octagon reflect off the white mat causing the light to be softer around the edges. I expose for the highlights and hope my reflexes are fast enough to catch the moments I want.
As I mentioned before, shooting from the floor can be tricky because the wire distracts my autofocus. It isn’t bad when I shoot straight through it, but at an angle the autofocus is all over the place. When the action gets close to the wire I usually switch to the manual focus ring. My thoughts end up being a string of profanities directed towards the fighters for moving so damn fast.
I could have stayed on the platform for all of the bouts if I wanted. Instead, I chose to be on the floor because, as I learned from shooting the Arnold Sports Festival in Columbus, some of the most intense moments happen up against the wire. 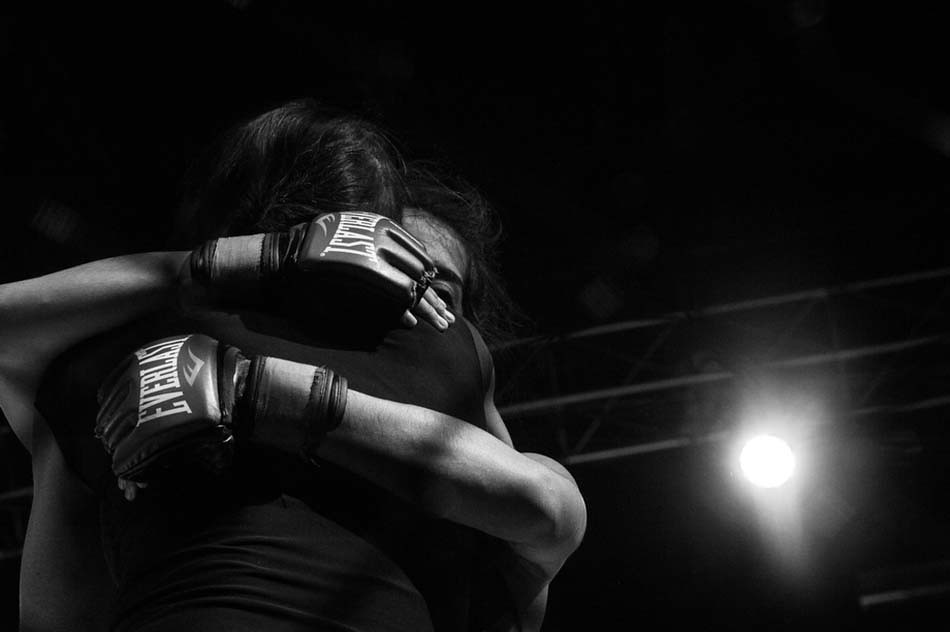 TID:
What type of problems did you face, and how did you overcome them?
JULIA:
Inexperience is the biggest one. I had only shot MMA events twice before this. I had to really focus on the way fighters moved in the first few seconds of each bout to get into their rhythm and anticipate what they would do next. Getting lost in the moment and forgetting to press the shutter in time is something I’m always working against.
Pushing myself into a more positive state of mind before the event was also a challenge. Right before MMA, I had been photographing a ski swap fundraiser for the local ski club and shopping around a little for discount boots and coats. Older men kept coming up uninvited to make sexist comments about my camera gear or what gloves I happened to be looking at. I let it get to me and was pretty furious when I walked next-door to the MMA venue. I think if I had kept my cool I would have been forward-thinking enough to figure out what route the fighters took before their introduction so I could have shot a decent gallery before deadline. There were a lot of pre-fight moments I missed.
As a good friend of mine aptly says, it’s all just growing pains. I moved 2,000 miles away from everything for this job and there’s been a lot to get used to. On each assignment, I learn something valuable I can use for next time.
TID:
I think this is a common struggle for photojournalists (moving to new places far from home/what we are familiar with), especially early on. What have been some of the struggles, and what have been some of the rewards?
JULIA:
When I graduated, I didn't know what I wanted. I was switching between desperately wanting to just BE somewhere for a while in a staff position and wanting to jump tracks to look for NGO or multimedia internships. Since high school, I've only worked for newspapers. I was curious what the other side of things would be like. Multimedia is beautiful and I wish I knew more about doing it well.
To bide time, I looked online for service industry jobs in Atlanta where I could live with family until I made a decision. My mom had just gotten married and moved from Alabama to a small apartment in NYC. My dad cut contact with me about two years ago. I couldn't exactly go home. I did a blanket search of photojournalism jobs across the country on Careerbuilders.com when scrolling through Starbucks openings got too depressing. An ad for a staff photoj spot in Great Falls, MT was the first thing that popped up.
I had never heard of the town or been to Montana before, but didn't I sign up for photojournalism hoping for new experiences? I heard they had mountains? Actually being contacted for an interview seemed less likely than finding life on Mars. A month later, my editor contacted me and within the week I was arranging to move. When opportunity knocks, you answer the damn door. (From this experience, I can logically conclude that there is life on Mars.)
Logistically, it was crazy. In three weeks I sold my car to buy one that could handle snow, I sold all of my furniture. Moving across the country for college was a challenge but I had months to figure that out instead of just weeks. Emotionally, it was a mess. On one hand, it was a huge confidence boost. I'm no photoj superstar. I'm talented and I work my ass off but I've never been in the spotlight. Never won a contest, never been to Eddie Adams. There's a checklist of "success" in our industry and my achievements didn't live up to it so I figured I probably wouldn't be employed either. At least, not immediately. Exceeding expectations I set for myself has been wonderful.
I found a newspaper staff that kept its eye for quality storytelling through hard cuts. They are supportive, patient, talented and funny. I couldn't have asked for a better start. That being said, I miss Athens every day. I had wonderful friends in Alabama, but I truly belonged in Athens. It was my family; is my family. We keep in touch, but it isn't the same as tearful hugs in person when life pull the rug from under you or universally unrivaled parties celebrating the fact that Beyoncé exists. I know I'll make more friends, things will get better, everyone goes through this. I know it, but it doesn't change how I feel right now. I'm homesick, and it's hard. 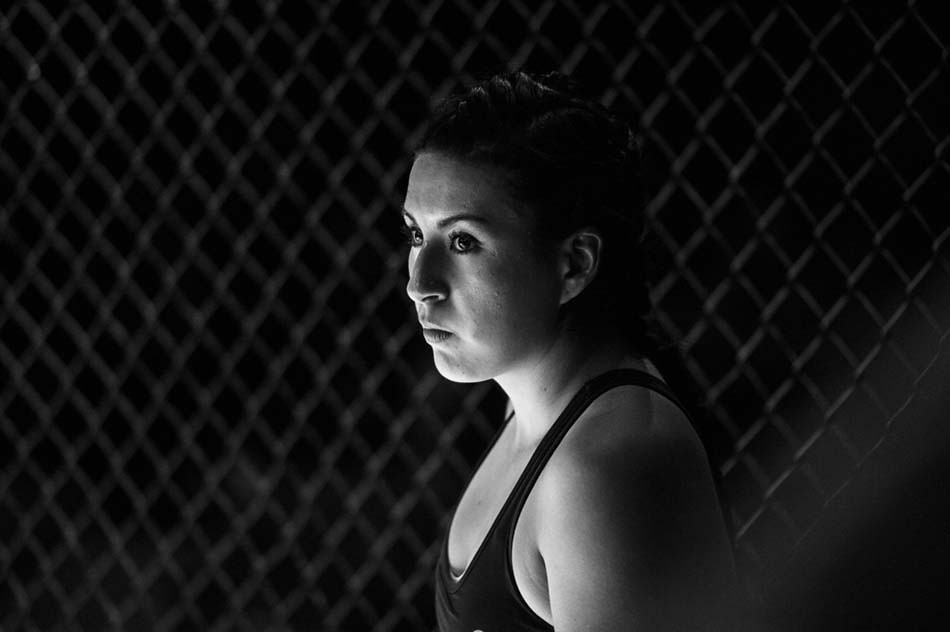 TID:
What surprised you about the event, and how did you work with it?
JULIA:
The biggest surprise was that I was the only media photographer there. The event itself had a PR photographer running around but other than that there were no other cameras. In the past at the Arnold Sports Festival my co-workers and every team’s photographers were pushing for spots next to the octagon or on the platforms. It reminded me of the rest of Montana in that there’s always so much space. MMA events happen regularly here and I’m excited about all the opportunities I have to make different compositions.
TID:
Now, let’s talk about the moment. Can you speak about the moments leading up to the frame, and what you were thinking to execute it?
JULIA:
Once a bout starts, you’re more or less stuck in the position you chose. You don’t want to walk around and block the audience’s view or, if you’re on the platform, you can’t get down until the fight is over because the octagon moves so much. Once I’m in position I follow the action and catch moments when limbs or referees don’t obscure the opponents’ faces. Before this bout, I noticed that most of the other competitors ended up on one side more often than any other. I went to that side and hoped that this one would turn out the same way. Fortunately I guessed right.
I’ve heard a lot of people say they don’t enjoy combat sports because it seems like fighters are mindlessly beating each other to entertain others. I see it differently. Every move they make has intention. They have to know their bodies extremely well to be able to find leverage and win the bout. Shooting through long glass, all I see is a tangle of muscles and determined faces isolated from the theatre of it all. I love showing that aspect of it and letting the audience put themselves in the competitors’ place. 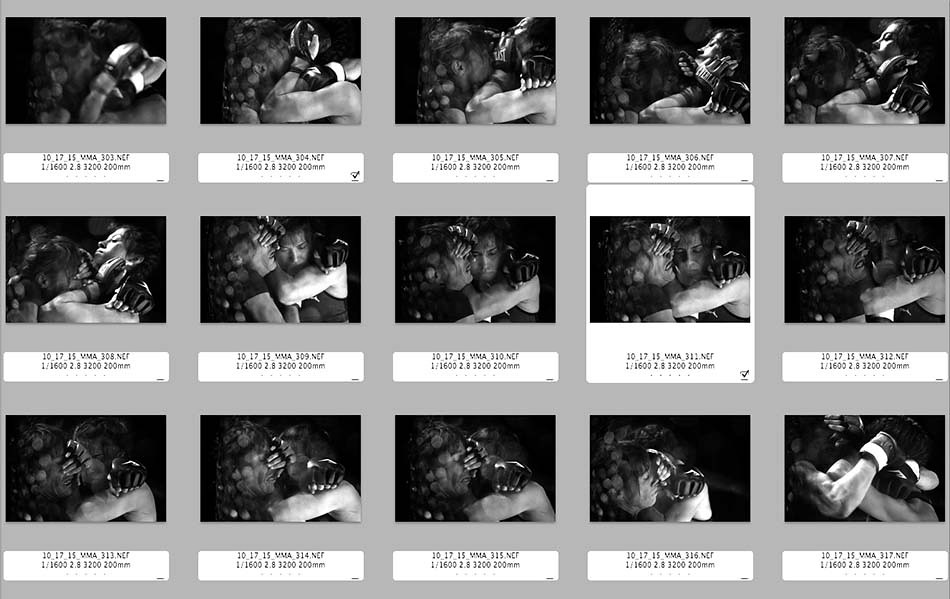 TID:
What did you learn about yourself in this shoot, and broadly, how have you grown as a result of your work in photojournalism?
JULIA:
I really struggle with anxiety. I worry and obsess over miniscule things constantly. I’m aware that I do it and sometimes I can’t stop myself. It’s noisy and it makes focusing on anything difficult. To shoot an event like this well means that I was able to put all of that aside and really be in the moment for once. My mind quiets down for a while. It’s a huge relief. This shoot was a re-affirming moment that I am stronger than my mental illness.
Photojournalism makes me brave. I have pushed my comfort zone so much further than I would have otherwise. I learned to be tenacious, outspoken and opinionated. I’ve been through so much to get to this point. Now I have the confidence to believe that wherever I end up is where I’m supposed to be. There are lessons to learn at every point. It’s more of a life philosophy than a career.
TID:
What have you learned about others? 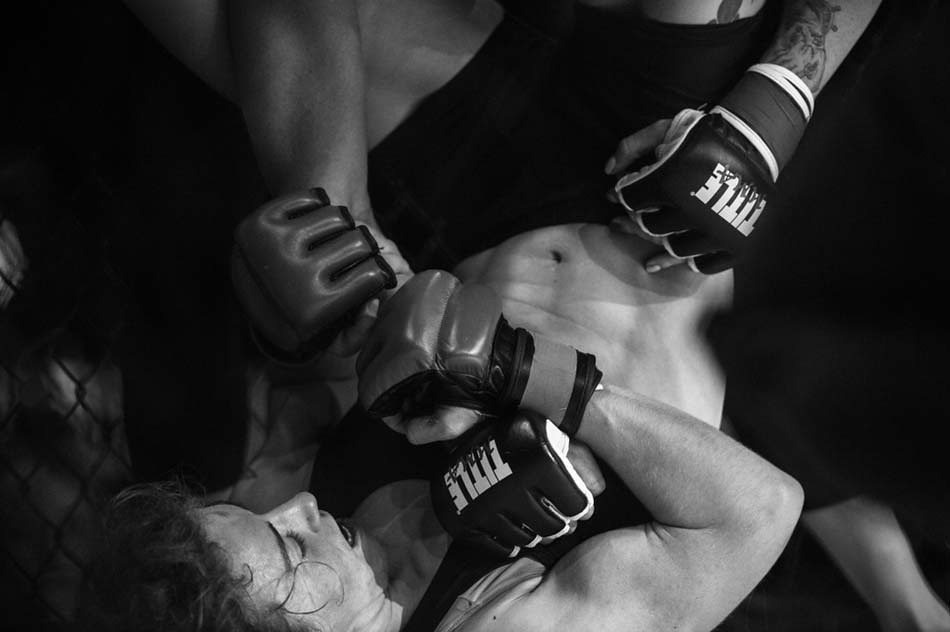 JULIA:
Stereotypes are a lazy person’s way of understanding the world. I had a fairly sheltered childhood and held on to my share of them. Ultimately we all want the same things. We want understanding and respect. We want to interact with others knowing that they are basing their opinions of us on who we are in that moment instead of referring to a preconceived set of ideas on how we will behave. The most meaningful thing that can be done for another is to learn what they’ve been through and understand their perspective before making assumptions.
TID:
In conclusion, what advice do you have for photographers?
JULIA:
Going with the flow, so to speak, is not something I’m good at. Not knowing where I’ll be 6 months in the future drives me to the brink of insanity. It’s not a pretty sight. So, for everyone else struggling with big changes I say make your plans. Figure out as many details as you need to help you feel like you have direction. The destination might not be where you originally thought, but you’ll end up where you’re supposed to be.
:::BIO::: 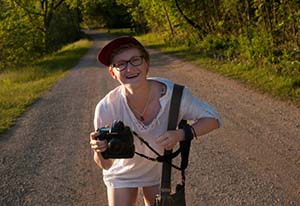 The world: “Wait, you’re trying to be a photojournalist? You know you’ll probably never get a job, right?” Me: “WANNA BET??”
Moss is a self-described sassy, stubborn, 22-year-old Ohio University graduate from Huntsville, Alabama. She’s a recently joined the staff as a photographer at the Great Falls Tribune in Great Falls, MT. For fun, she goes on long walks far from civilization, hoping a bear doesn’t eat her.
Website: juliamphoto.com
Instagram: @photojmoss