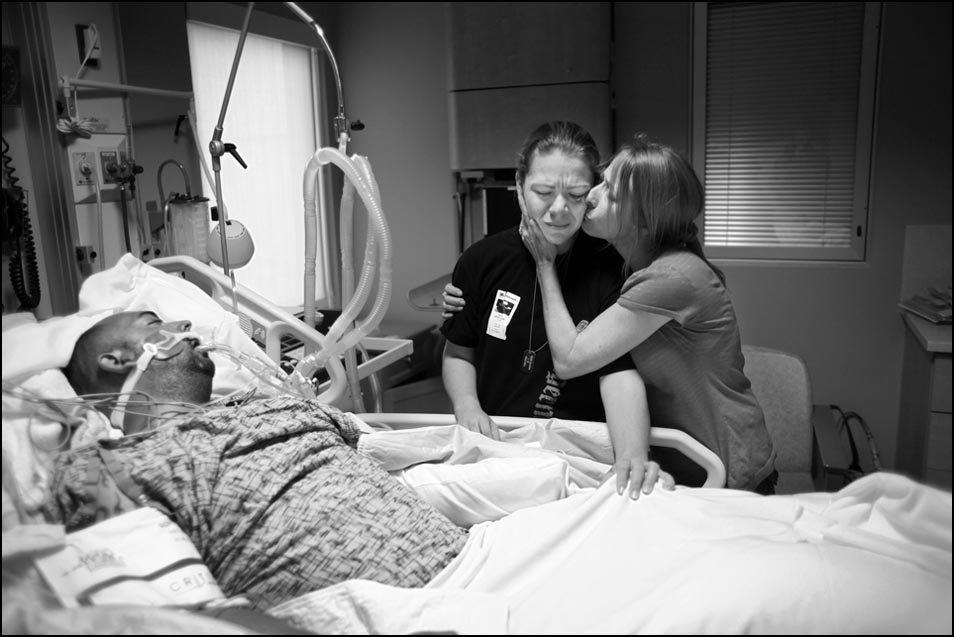 TID:
This is a powerful picture, John. It's very touching. Please tell us a little of the backstory.
JOHN:
The county our paper is based in has the highest prescription drug death rate in Florida, which has the highest rate in the country. Seven people a day die from a prescription drug overdose in Florida. Lane DeGregory and I wanted to do a story that put a face to all the grim statistics that were being reported in our paper. So we started with Ladies Day in our county's drug court. We listened to and approached hundreds of families as they came through. A few people were a good fit for our story and were willing to share with us. Stacy and Sherry, who are in the picture, were two of them. We had been following them for a month or so when Sherry came to court with a request for the judge: let her daughter out of jail to witness the death of her cousin, Frankie, who was on life support. Stacy and her cousin had been living together and using heavily together. Everyone involved felt like someone in the house would overdose. Stacy turned herself in to get treatment, so she wasn't surprised by the news.
TID:
Since this image is part of a larger body of work, can you tell us how it fits in?
JOHN:
This became the lead picture. We felt like bearing witness to one of the seven daily overdose deaths, and how affects a family, was a key launching point for our narrative. It was Stacy's bottom, and her will to recover started there.

TID:
What challenges did you encounter while working to make this image?
JOHN:
We went straight for the hospital from court. It would take a few hours for Stacy to get processed out, so I was introduced to the family, got
their permission to stay with them, and went to find the PR department at the hospital. It was a small affiliate hospital, so there was only a
marketing department and no one was answering the phone. So I left voicemails. We all know HIPPA and the difficulty working in hospitals,
but events started unfolding and I didn't have permission. So I followed the "better to ask forgiveness than permission" philosophy. And it got
sticky. Security was called, and the family understandably didn't want to be burdened with the extra drama. To make a long story short, we
worked it out. We got the HIPPA forms signed after the fact, and let the family have space to deal with Frankie's death.
The thick of the sticky on that day was standing with security (who wanted to throw me out) and a grieving family (who didn't want one more
difficult situation on an unimaginably difficult day.) I think a sincere desire to be respectful to everyone involved won the day. The hospital has
legitimate legal concerns and the family has legitimate emotional concerns that were more important than my concerns. Putting them first and
then asking if there was a way I could also report an important story went over well. If anyone involved thought I was trying to be more important
than their concerns, they would have shut me down. And they would have been right.
TID:
Can you expand on how you mentally the situation?
JOHN:
I guess every situation is unique, but that day I felt like as soon as anyone (family, security or hospital PR) dug in their heels, I was done. So
when the security guys came down the hall, my best bet was to be easy to deal with. I wasn't going to make their job unpleasant. I walked to
them, and then basically walked myself out. I remember suggesting we go to the waiting room, away from the family, and wait for the PR people
to get there.  We made small talk while waiting for the PR department, and by the time they got there, it was pretty relaxed.
I explained what was going on, apologized for not being able to get ahold of them sooner, and explained I didn't know the morning events would
bring me to their hospital. I said I we had the family's blessing, that the intent was to raise awareness of a serious social issue, and that I was
aware we needed to get HIPPA releases signed. Could we do that? About then Stacy's mom came to see how I was doing and offered to take the
forms to be signed. After the initial tension cooled, it went well. I think a good first impression was super important.
In other situations, where you have a clear right to be somewhere and that right is being violated, standing your ground can be the right
thing to do. I think it just depends on the circumstances.
TID:
Now, onto the moment. Can you talk about the moments leading up to the picture and also the actual moment.
JOHN:
I really thought the most powerful moment was to come when I made this frame. I thought it would be the moment of death. I was waiting to document one of the seven deaths that would happen that day, and was capturing everything happening around me.
In the year that followed, we started realizing that the toll Stacy's mother would face were at least half the story. When is she enabling? When do you get tough? When do you let go? How far do you go as a parent? We learned recovery, or lack of recovery, is harder on parents than addicts. So it wasn't until we went a little further on our learning curve about recovery that the value of the Sherry mothering Stacy over Frankie on his death bed sank in.

TID:
What surprised you about the moment that you weren't expecting? How did you feel?
JOHN:
Like the question above, the surprise, or appreciation of that moment, came later.
I remember wincing every time I hit the shutter. It sounded so loud. It's hard to document the worst moment of someone's life. Even if
your intentions are good, it feels very intrusive. I guess because it is intrusive. Most of you feels like you should stop. Every time the shutter
goes off its an intrusion that you decided to make. So theres this conflict between wanting moments and dreading hitting the button.
And it wasn't my imagination. I talked with Frankie's mother several months later and she said she hated it every time "that damn shutter
went off." But she was still genuinely glad that we were there. She felt like the story reached people and it gave meaning to her son's life. She
said it was worth the intrusion. I couldn't have known that the day Frankie died.
There was nothing but tears and sadness to feel in the room. It is awkward participating in mourning a family member that isn't yours. You
know you don't feel the magnitude of loss the way everyone else in the room is feeling it. But seeing death is profoundly sad. It reminds us that
our time, and the people we love, are not guaranteed for tomorrow. There are people I never want to say goodbye too. You can't help but
thinking about them while your working. I remember at the end of the day driving home with the anticipation of getting my arms around my wife,
and being glad it was over.
Most working photojournalists will find themselves at some point in a room like that, with no guarantee that the family won't later regret you
were there. They might be regretting you are there at the moment and just don't have the energy to deal with you. There are no right or wrong
answers. At the end of the day you've learned something about yourself: what you will and won't do for a photograph. 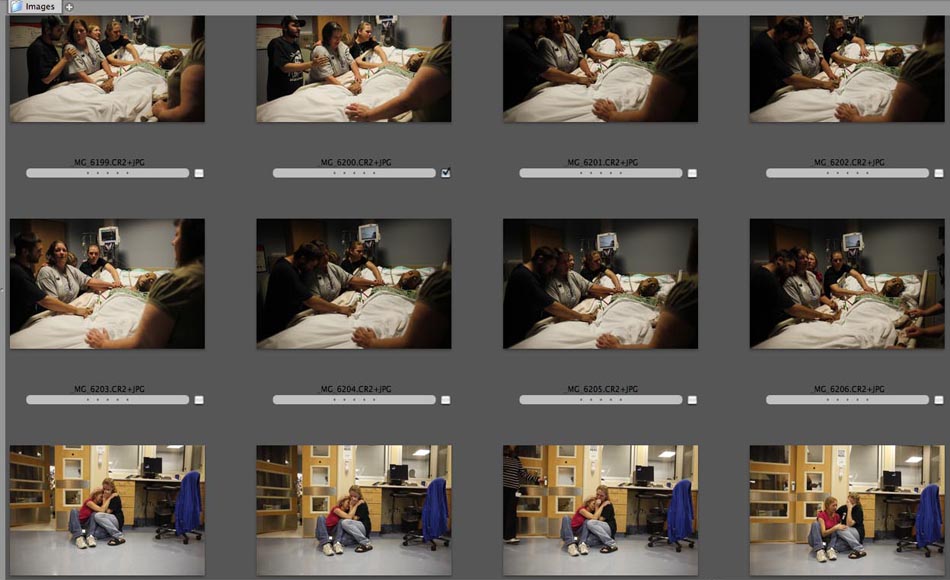 TID:
What have you learned about yourself in the process of making this image?
JOHN:
We kinda covered this, but I learned I may not recognize the holy-Bresson-decisive-moment when it happens. Whenever we did an edit, a few
days later I imagine, we went to the death bed, not Stacy and her mom. The decisive moment for that story was there, I just didn't know enough
about recovery to recognize it when I shot it.
TID:
What did you learn about others?
JOHN:
The fact that the family saw social value in me being there, with everything they were dealing with, still amazes me. On one of the worst
days of their life they recognized a chance to be in a story that might help others seeking recovery, and made emotional space to do it.
That makes them pretty exceptional people. They even asked me several times if I was OK. 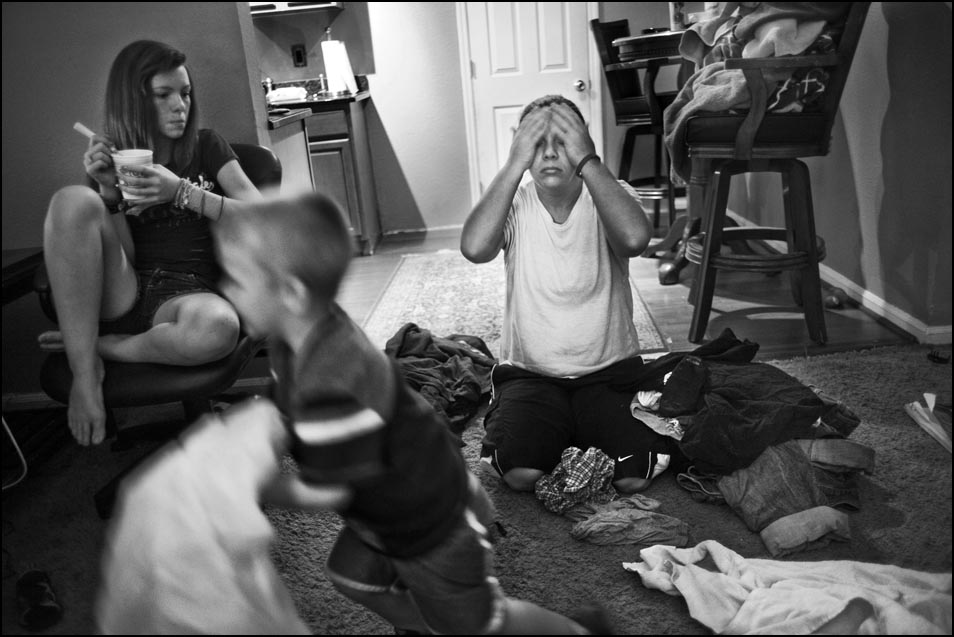 Sherry told us all along that they felt like if they help just one person the story would be worth it. As a happy ending, after the piece published
a woman who worked next door to Sherry pulled her aside. Her 16 year-old daughter was living in a drug house shooting Roxies, and because
of Stacy's story she called her parents to come pick her up and put her in rehab.
We got a lot of feedback and stories like that through the paper. Later, when Sherry called and said she really felt the year of letting us into her
family's business was worth it, I was really relieved. 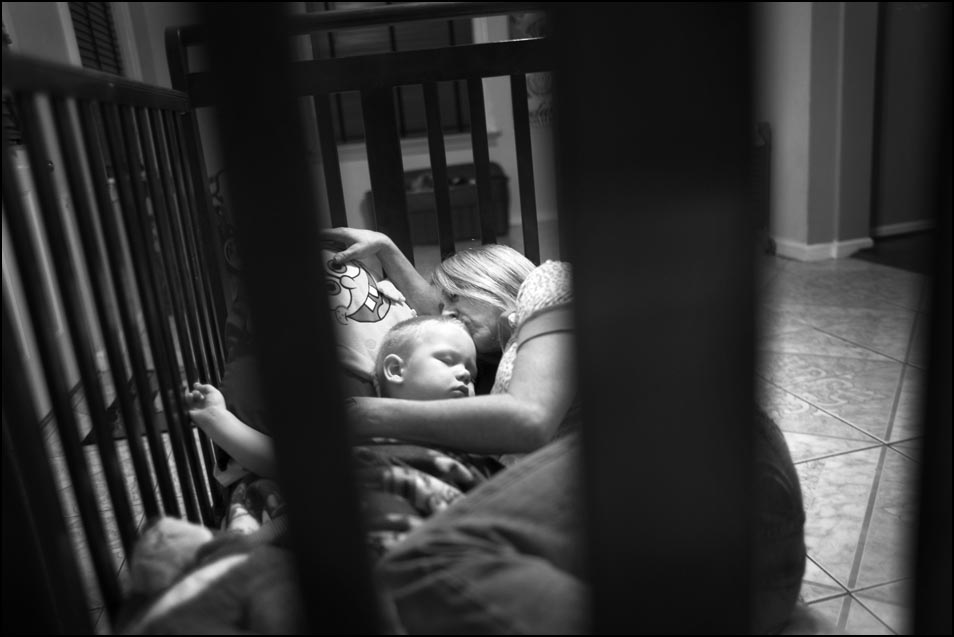 TID:
In conclusion, what advice do you have for photographers?
JOHN:
Joseph Campbell's advice. "Follow your Bliss."
:::BIO:::

John Pendygraft was born and raised in El Paso, Texas. After receiving
a BA in anthropology from the University of Texas at Ausin, he
interned at the St. Petersburg Times (now the Tampa Bay Times) and the
Cedar Rapids Gazette in Iowa. He worked as a crisis counselor in a
Baker Act unit for two years before taking a staff photographer job at
the Baton Rouge Morning Advocate. In 1997 he joined the staff at the
Tampa Bay Times, where he still works today. He is married to Letitia
Stein Pendygraft, and was blessed with a baby girl, Isadora
Pendygraft, on January 4 of this year.
You can view his work here:
www.johnpendygraft.com
http://www.tampabay.com/blogs/alleyes/section/our-lens