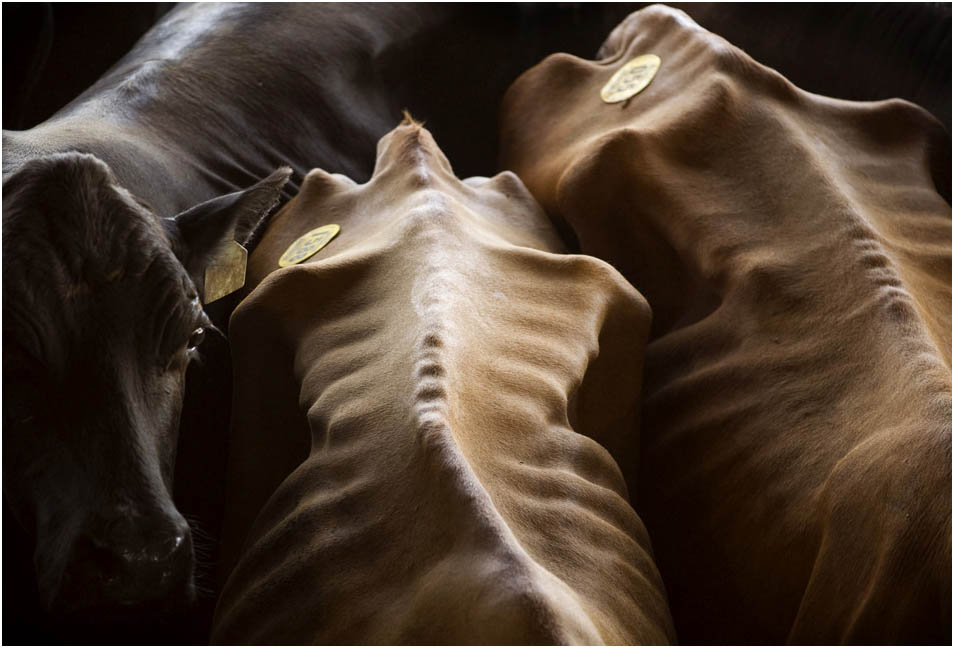 Thanks for taking the time to share your work.
Please tell us about the background of this image.

In June, I began thinking about shooting a photo essay about the
extreme drought in Texas. It was exceptionally hot, even by Texas
standards, and we hadn’t had any rain in months. The weather was
on everybody’s minds, and I thought the drought would be a good
project to keep me busy during the slow summer months.

We went through a bad drought in 2009 so I knew there was potential
for some good photos. All indications were that the 2011 drought was
going to be even worse, and I wanted to photograph this one more
thoroughly.

Drought has been called a “creeping disaster” because it happens in
slow motion, unlike a hurricane or earthquake. Month after month of
no rain slowly causes changes in your surroundings. At first you don’t
even notice. But if you look around now you can’t miss the depressing
signs of the drought everywhere. The 2011 drought in Texas has caused
at least $5 billion in agriculture losses so far, and that’s not including
the recent devastating wildfires that have destroyed hundreds of homes.

My goal for this photo essay was simply to document the changing
landscape, and to show how the drought is affecting people, plants and
animals. 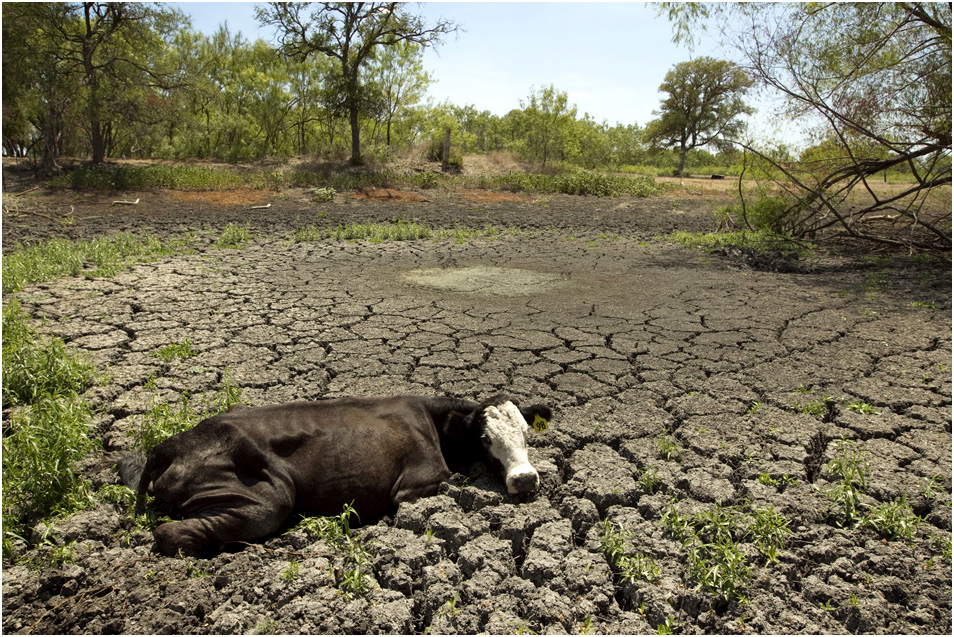 If I understand you correctly, this project was from your own initiative.

Yes. It was a self-assigned project. I have been a newspaper staff
photographer for 20 years, and I learned a long time ago that if you
don’t like the assignments you’re getting from your editors then
make your own assignments. It’s my way to stay positive and keep
being creative and productive. Besides, my editors want my good ideas.
They don’t like giving me bad assignments any more than I like getting
them. This drought project was a good example, but I try to follow
that principle in little ways almost every day.

In an environment with shrinking resources, how do you work around
this and still create pathways of success in the newsroom to get stories
like this published? 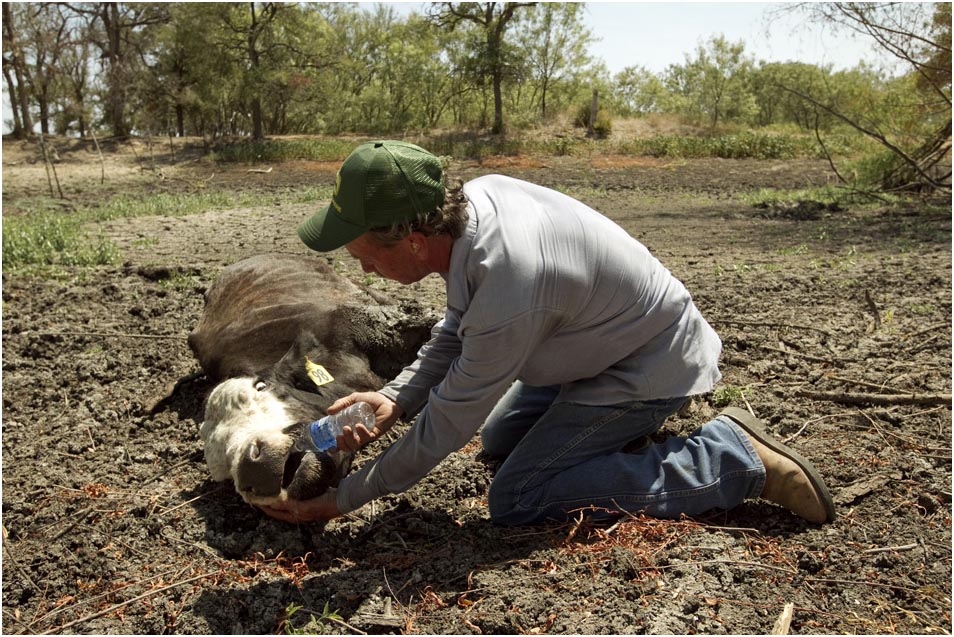 The problem of shrinking resources is a major concern for all of us in
the newspaper business. For photographers, it means there is very little
space in the newspaper for our work, especially projects with multiple
photos. And due to staff reductions and increasing workloads there is
not as much time to work on long-term projects. I give credit to my
editors, Director of Photography Jay Godwin and Assistant DOP Nell
Carroll, as well as other editors who gave my drought project the go-ahead
and gave me time to work on it.

In this case, I wrote a project proposal that identified a newsworthy story
and clearly explained my plans and goals. It was an easy sell. I began
working on the project and soon a publication date was set for late August
in our Insight & Books section that focuses on in-depth analysis.

I try not to worry about things I can’t control, like where my project is
published or how much space it gets. I was determined to do the best
photo essay I could. I hoped it got published in the newspaper in a
meaningful way, but regardless I intended to produce a good online
photo gallery.

I only had a few weeks to produce a photo essay on a very broad
subject that required lots of driving around, exploring and making
my own contacts. Keep in mind I had to shoot my regular assignments
too. It’s not as if I was let loose to concentrate full-time on this one
particular subject. I worked on the project for only a few days spread
out over six weeks. On many of those days I also shot other assignments.

The photo essay was published on a double truck, but it shared the
space with some other stories. There was also a secondary photo on
Page 1 to refer to the project inside. The design by Scott Ladd was great.
Reporter Brenda Bell wrote a thoughtful introduction. Of course I wish I
had more time to work on the project and I wish it got more space in the
newspaper. But I could say that about every one of my projects. It was,
however, published online exactly the way I wanted. 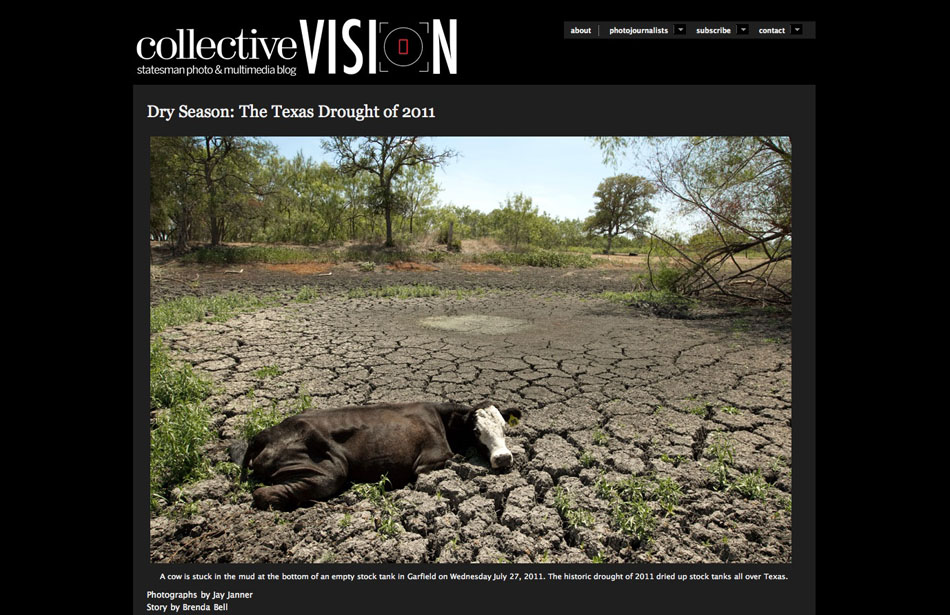 You're an accomplished photojournalist with a lot of experience
working in a variety of situations. When you go into this type of
project, can you tell us what goes through your mind at the beginning?

My first thought was this could be a really good project - don’t screw it up.

The Texas drought was a very broad subject. I needed to do some research.
I did an internet search to see what had been written recently about the
drought. I set up a Google alert and a Twitter search to get daily feeds of
new information about the drought. I brainstormed ideas and compiled
everything into my “shot list” - a list of photos I wanted to take.

I started photographing the project by simply driving around the
countryside and exploring. I met my first contact, a rancher, by
chance on the side of a small country road. I met a farmer just by
walking up to him in his corn field.

Once I got started it was just a matter of being persistent and trying
to get everything done on my shot list. 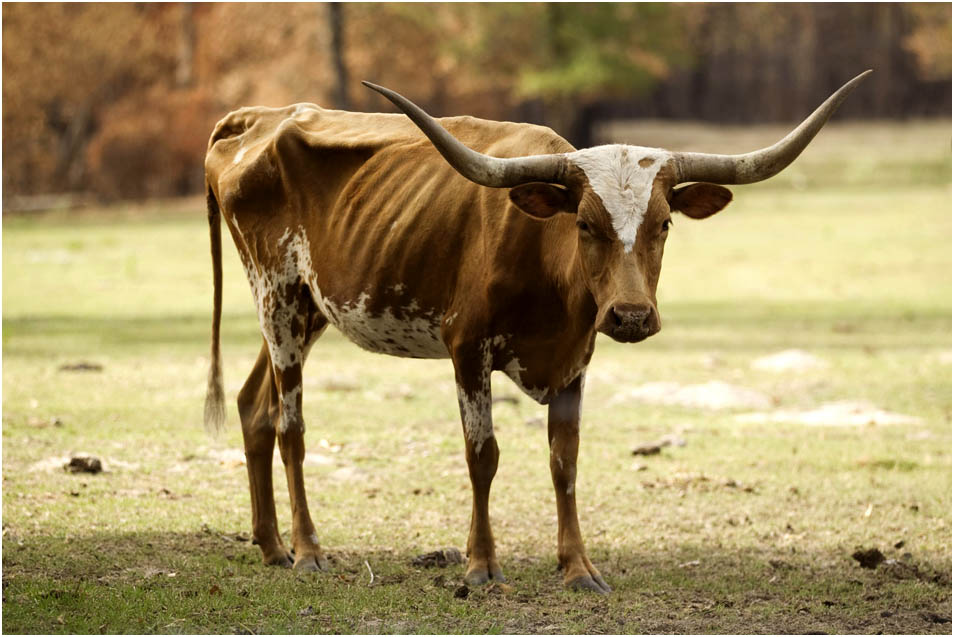 Now onto the image. Please tell us in the moments/days leading
up to it, as well as what is going on in the image itself.

I photographed a lot of cattle for this project. The huge economic
loss in the ranching industry was one of the main stories of the drought.
One of the first photos I took was of an underweight longhorn cow
standing in a pasture with its ribs visible. The longhorn, a Texas icon,
looking so weak and sickly was quite striking and kind of symbolic. It
was a decent start, but that photo didn’t make the final cut.

Later I spent some time with ranchers and made many more photos of cattle.
I made two or three photos of cattle that I really liked, including a series of
photos of a cow stuck in the mud at the bottom of an empty stock tank.

I knew I was already in pretty good shape with cow photos, but on this day
I decided to check out a cattle auction in Fredericksburg. Cattle auctions
all over Texas were packed because ranchers were being forced to sell their
herds. There just wasn’t anything to feed them and the stock ponds had
gone dry.

At the auction barn, I positioned myself on a catwalk where I had a good
view of the whole yard. Cowboys were busy gathering the cattle for the
start of the auction. The corrals were quickly filling up. It wasn’t long before
I began focusing on one particular pen. The light was good there and it had
some very skinny cattle. I spent at least half an hour photographing just
those cattle - waiting for the composition and light to get just right. 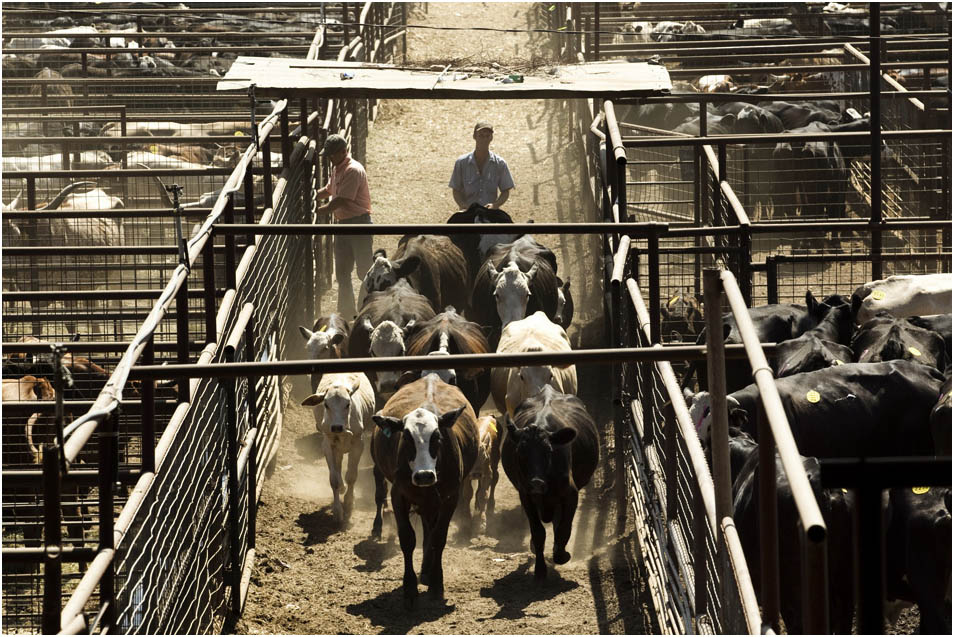 What do you tell people when you want to take pictures like this?

You just need to be honest, and tell them about the project and let them
know what kind of photos you’re interested in taking and why. This project
didn’t present any special difficulties with gaining access. The people I
photographed were glad that someone in the media cared about their plight.
They believed the national media was ignoring the drought in Texas. 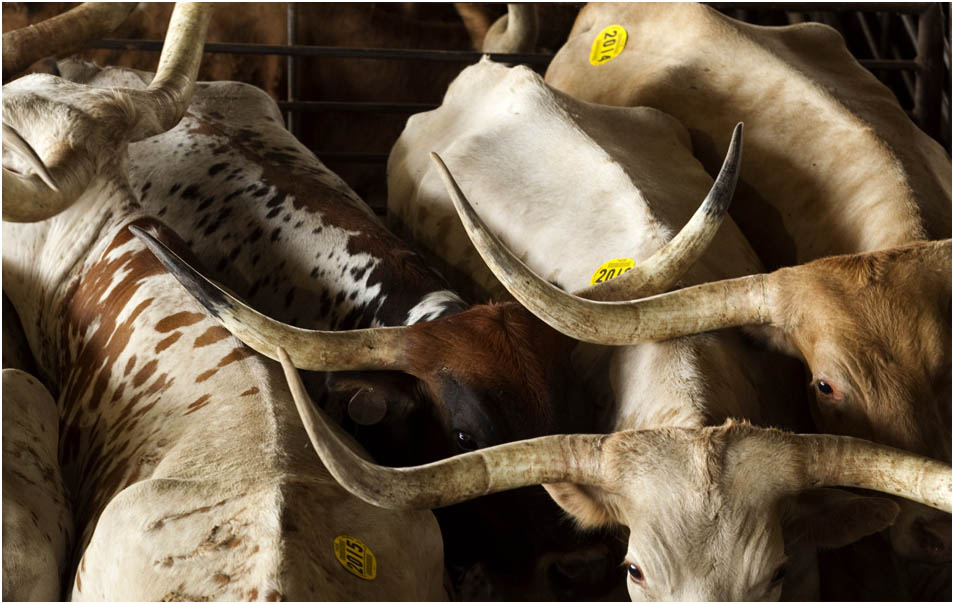 What was the reaction to the publication of this image?

The online photo gallery went viral on the internet. It got several thousand
views per day for about a month. Comments have been pouring in from
all over, even outside the U.S.

There were many different reactions. A lot of people said they were shocked
to discover how bad the drought was. Many expressed sadness for a state
they loved dearly. Animal lovers were distressed over the dead and dying
animals in the photo essay. There were a lot of comments about the
environment and global warming. Many just wanted to pray for rain. 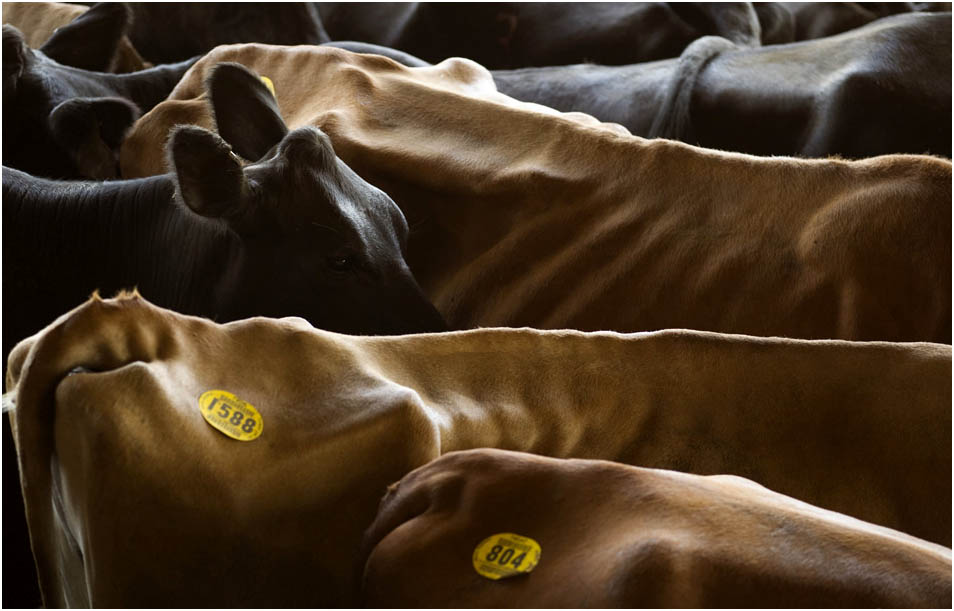 What struggles did you face during the making of this picture and the story,
and how did you overcome them?

The main struggle was just that the subject was so broad that I didn’t
have enough time to photograph everything I wanted. For example, I really
wanted to make a good wildfire photo. Wildfires were happening almost
everyday, but for various reasons I never seemed to be at the right place
at the right time. Eventually, I did take a good fire photo just a few days
before my deadline. The main photo in the print version of the photo
essay, a picture of a farmer in his field, also was made right before the
deadline.

Eventually, I just ran out of time and had to be resigned to the fact
that this was as good as it was going to get.

What surprised you during this process?

At the start, I was genuinely surprised at the severity of the drought.
Living in the city, I didn’t know how bad the drought really was.
I learned a lot about ranching. I didn’t realize how big a disaster it
is for ranchers to be forced to sell their entire herds. Some ranchers
spend their whole life building up their herds. It will take years to
recover, and some ranchers are just going to call it quits.

What do you know now that you wish you knew before?

In the past, I used to be overly concerned about how my photos
were being used in the newspaper – which photos were used
(or not used), how big they were used and how they were cropped.
It took a long time, but I learned to let that go. I have no control
over that stuff. Now I just focus on trying to do good work. It has
made me happier and more positive.

What advice do you have for photographers wanting to photograph in
similar situations? 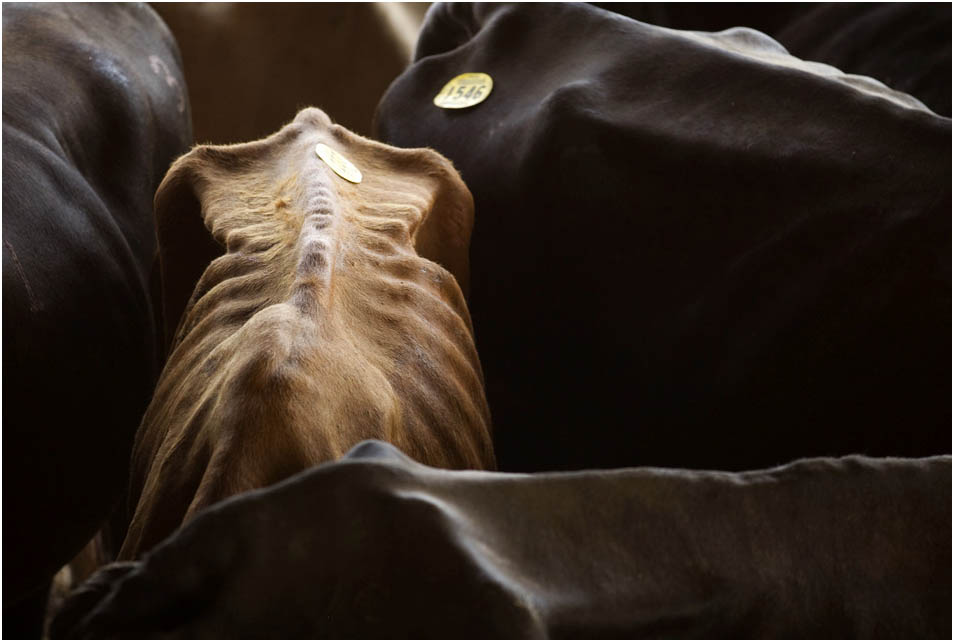 You just have to get out of the office, hit the road and not be afraid
or too shy to walk up to strangers in any situation. You make contacts,
which can lead to other contacts and it kind of snowballs. You have
to get organized and be focused on your goals. And finally, you have
to be persistent and work hard. I believe hard work trumps talent. At
least that’s how I’ve survived this long in the newspaper business.

In conclusion, where do you draw inspiration from?

I get inspiration from a wide variety of places on the internet -
everything from photo students on A Photo A Day to well-known
photojournalists on The New York Times Lens photo blog, for
example. I love reading photo blogs and checking out social media
links to various photo projects. It may be an obvious reference, but
National Geographic has been my greatest source of inspiration over
the years.

Last and certainly not least, I am blessed to work with a great staff
of photojournalists at the Austin American-Statesman who inspire
me and keep me motivated.

Jay Janner has been a staff photographer at the Austin American-Statesman since 2003. A photojournalist for more than 20 years, Janner has covered everything from hurricanes to Super Bowls. He has won numerous national awards and was NPPA Regional Photographer of the Year. Previously Janner was a staff photographer at the Colorado Springs Gazette and the Corpus Christi Caller-Times. He is a graduate of Texas A&M University.

You can view his work here:

Next week we'll take a look at this touching image by
WIlliam DeShazer of the Chicago Tribune: 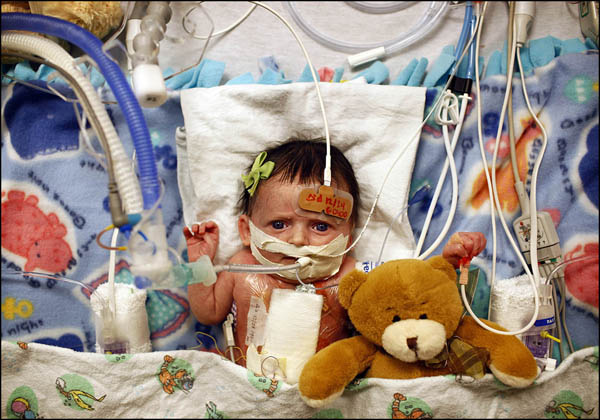