TID:
Thanks Greg for taking the time to talk with TID. We'd like
to talk with you about this image: What's the background
on it? 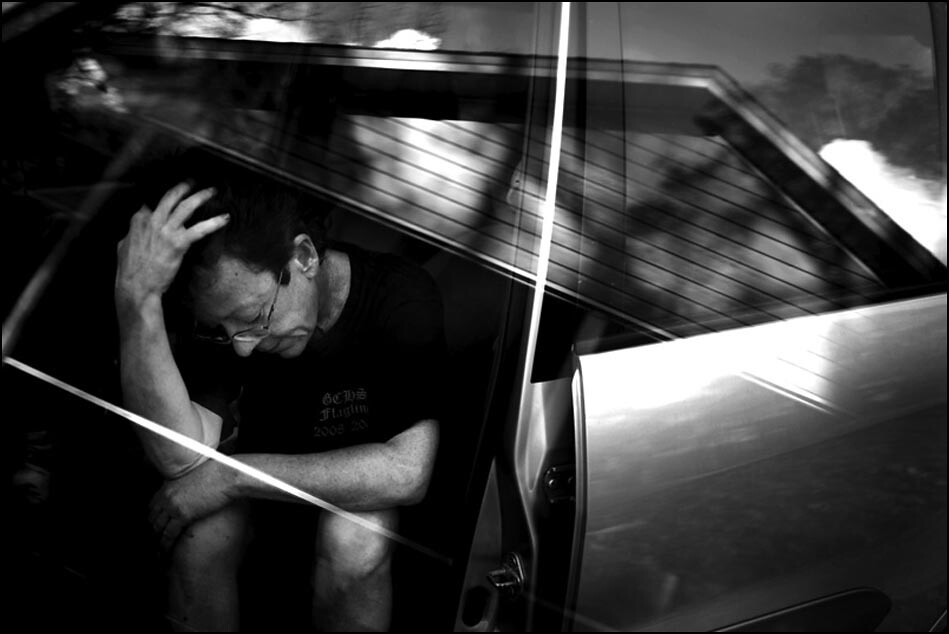 GREG:
I was working on a long-term photo essay about the new
face of homelessness. Southwest Florida was hit hard by
the foreclosure crisis, and I felt something bigger than our
daily coverage was needed to show the situation.

I worked for months but kept running into dead ends. Many
of the people in foreclosure process were people who never
thought they could be homeless, and suddenly they were in
line at the homeless shelter. When I asked people, often the
response was kind, saying "This is an important story," yet no
one wanted to participate.

After five months I still hadn't found anyone.

As part of my search, I called the homeless shelter weekly, and
finally they told me that a woman, who was about to lose her
home, was scheduled to enter the shelter the following week.
I asked the shelter to ask her (Vicky Heinel is her name) if she
would be open to having me around. The next day I received a
call from Vicky, wanting to know more about the story and what
exactly I was looking to do.

I told her I was trying to show the larger community what was really
happening in the foreclosure crisis. She agreed, and I met her that
afternoon and she told me what was to happen in the coming weeks.
Vicky had lost her job six months ago, and wasn't able to pay her rent
anymore. She was to be evicted soon.

This set the stage for one of the most emotionally draining processes
I have ever witnessed. After a couple days I was allowed to come and
go whenever I wanted, I was even told I didn't need to call or knock.

On the fourth day after I met Vicky, her and her neighbor/landlord/
best friend, both of whom were being evicted, were still rushing to
move everything out of their homes. It was getting close to 5 p.m.,
when the bank was supposed to show up and change the locks.
But the bank didn't show. 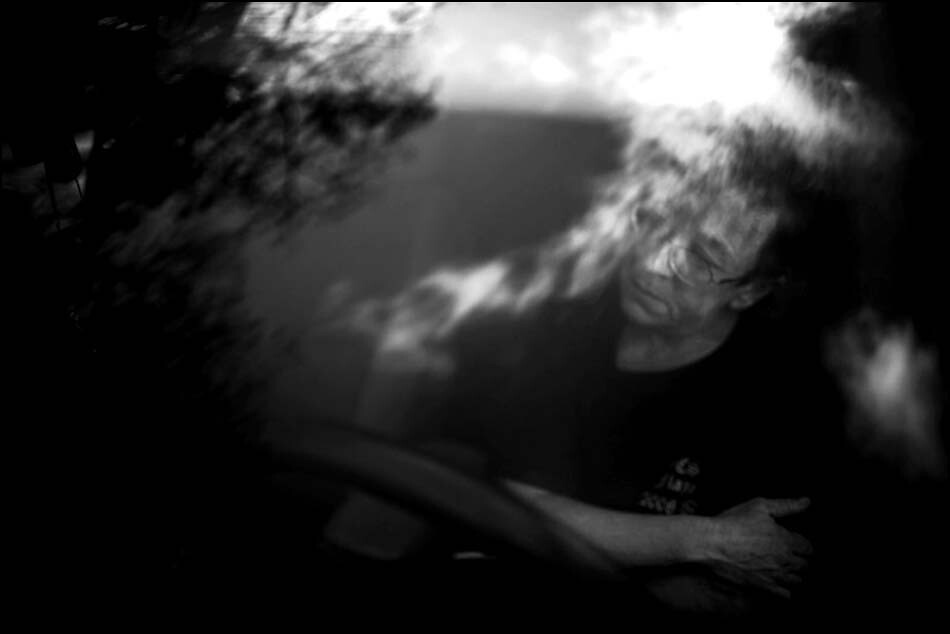 This went on for nearly five days. I would complete my daily assignments
for the paper and immediately head over to their homes to see where
things stood. I would stay until everyone had turned in for the evening.
We as photojournalists talk a lot about trying to be a fly on the wall,
and in this situation that would be the best way to describe my presence.
The families were so wrapped up in moving out, cleaning up, all the while
being devastated about the process, it seemed at times they forgot I was
even around. During times when the situation felt less hectic, they would
talk to me, whether it was about the situation, or just to share family photos
they found while moving out. I became very connected to the families
during these times.

TID:
Ok, now to the image. Can you tell us about the moment?

GREG:
The image happened one of the afternoons Vicky thought would be her
last day in her home. I drove to her home after finishing a daily assignment
and as I pulled up, I saw her sitting in her car listening to music. Vicky
wasn't the kind of person to be lazy, so I knew something was wrong. As
I approached her car, she made eye contact, then turned her gaze away
again. I made a frame as I walked up to the car just in case I didn't have
another chance.

I said "Hi" to her and asked if everything was ok. She didn't really answer,
only mumbled. I noticed the reflection of her home in the window of the
driver sidedoor she had open. Vicky looked up again to see me readying
to make a photo, at that point I put my camera down and made eye contact
as if I was asking if it was ok. She nodded subtlety, and turned her head back
down again. I made a few frames, trying to shift myself into a position that
would frame her in the space on the window that wasn't reflecting the house.
Once I found that spot, I just waited for her body language to show how she
was feeling at that time. The whole time leading up to the photo was only five
minutes, but it felt like hours. 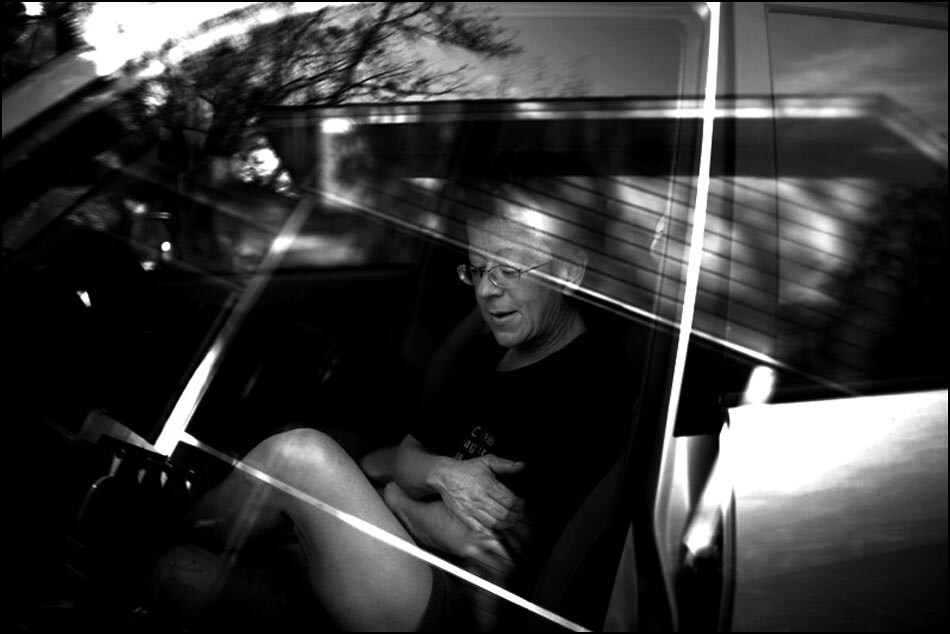 TID:
What was going through your mind while making this image?

GREG:
At that time, my mind was on her well-being. I had gotten to know Vicky
pretty well. To see her exhausted, beat-down and hopeless was tough.
She talked about giving up completely, because she didn't want to start
over again. On the technical side, I had to keep adjusting my exposure
because the sun was starting to duck behind the trees in her yard, and
my light was changing minute to minute. But it felt more like instinct at
that moment. I just wanted to help her. I decided that even though I might
not take any more photos that day, that I would stay until her neighbor/
best friend returned home. I was very concerned about Vicky at that
time. When I left that night, Vicky wasn't in much better spirits, but she
was in the care and comfort of her friend.

TID:
At any point was there any resistance for you to make this image, or
images like this? If so, how did you handle it?

GREG:
I definitely had resistance to making this image. I could feel myself
slowly squeezing the shutter for each frame, as though by going
slowly, the shutter would make less noise. I didn't want the click
to be a constant reminder to her that I was there. 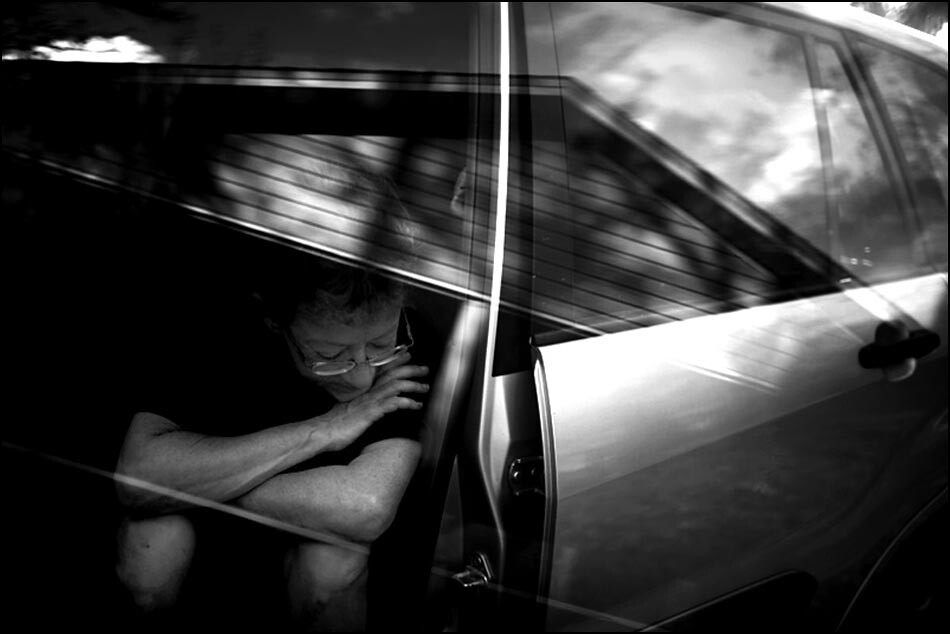 I'm not sure I ever handle these moments well. I leave the situation
almost every time second guessing myself - wondering whether I handled it
the right way. I talked about it with Vicky the next day when she felt
better was in more of a talking mood. I shared with her that I struggled
to take photos in that situation, knowing she's hurting, but also
explaining to her why I still did it. It ended up building trust between
Vicky and me.

TID:
Did she show any resistance to you photographing her in this situation?

GREG:
Vicky never showed any resistance to me in making this photo. Her
approval to me was through her eye contact early on. I probably would
have asked her if I had not received any indication it was okay.

TID:
What advice or insight do you have for photographers who want to
work on gaining access like this?

GREG:
I guess I would say: Every situation is different. The best thing is to
understand the person that you're photographing, and, just as
important, allow them to know who you are. This has been something
I didn't embrace when I first started out. I took myself out of the
equation when shooting stories, always trying to put the focus on the
person I was photographing, thinking who I was doesn't matter to
them. But now, my philosophy has changed completely.

I share almost anything, such as my background, where I've lived,
what I like to do in my off days, what my parents are like, etc. I feel
like this breaks down that initial wall that comes with being a
complete stranger, and it builds trust, so that when you raise your
camera, they know the person behind it.

The more they know you and feel comfortable around you, the more
intimate your story can be.

Kahn graduated from George Washington University, then worked at a the
Independent Tribune, a small daily newspaper outside of Charlotte, North
Carolina. Kahn later moved to Naples, Florida for a staff position at the Naples
Daily News in 2007. Recently his work on the the housing foreclosure crisis
in Florida garnered him awards in both Pictures of the Year International and
the NPPA’s Best of Photojournalism including being a finalist in POYi's 2011
Community Awareness and 2010 NPPA Photojournalist of the year (small markets).

Next week on TID, we'll take a look at this image: 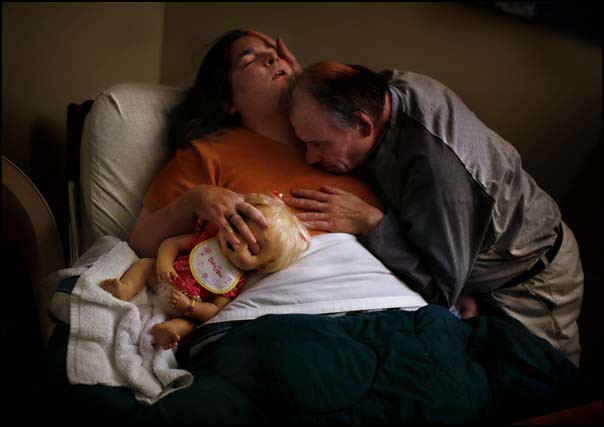