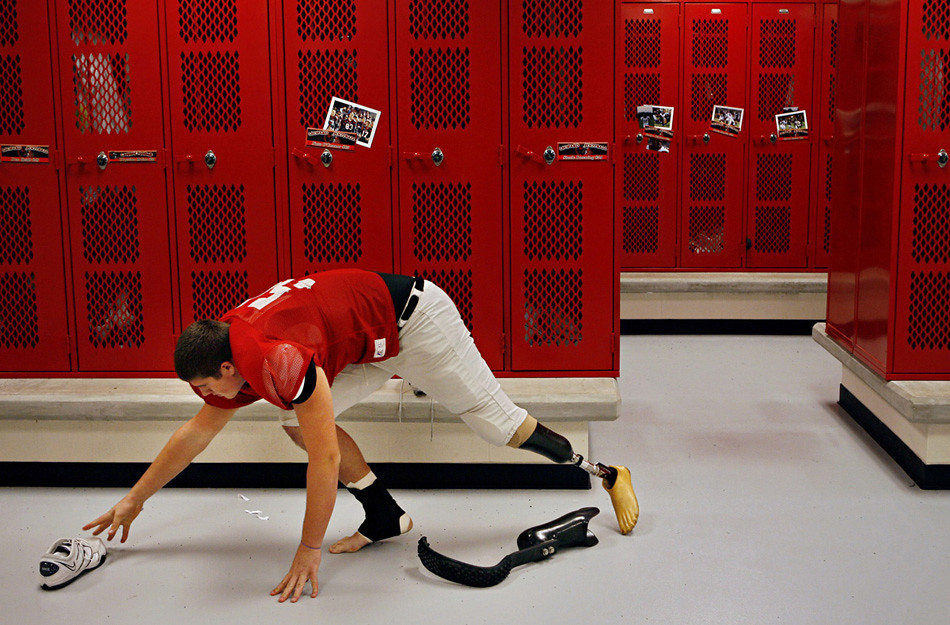 The gig was to spend an afternoon at football practice with
Steele Downing, a local athlete who'd had his leg amputated
at an early age.

Downing, a 16 year-old lineman for the Lovejoy (Texas)
Leopards, had his left leg amputated below the knee after
suffering from a bone disease since childbirth. The disease
-- a pseudoarthrosis of the lower tibia and fibula --
created holes in the bones of Downing's lower left leg that
led to several breaks before he and his parents opted to
amputate the lower portion of the leg when Downing was
9 years-old. Not to be deterred, Downing has played football
since the seventh grade and recently, picked up soccer.

It was one of those things where I wish I'd heard about
the kid beforehand -- would have made a great story. The
columnist writing about him, Matt Wixon, always finds these
great subjects in our area and is awesome to work with.
This assignment just fell in my lap.

As far as the image itself goes, it was made in the locker
room before practice started. I figured there was a photo
to be made in the locker room (there always is, if
you have the access.) So I asked the coach, as well as Downing,
if it would be cool to follow him getting ready. Fine with both.

One thing I believe strongly in is complete and total honesty
with my subjects about what I’d like from a shoot: access,
the kinds of images I’d like to make, etc. I don’t like the
“sneak” photos. In addition to the fact my parents raised
me better, I believe “sneaking” leads to disingenuousness
in the image that may not be apparent to the viewer.
It’s like this: I could cheat and never get caught, but I’d
always know, and that would be the most damning thing.

So openness is important. I called the coach beforehand to
see how willing Downing would be with me being there. It’s one
thing to agree to be photographed, but another thing entirely
when the media arrives and starts following folks around. To
make the kind of images I want, I need permission to really
get in there when necessary. Again, everything is about trust
to me. 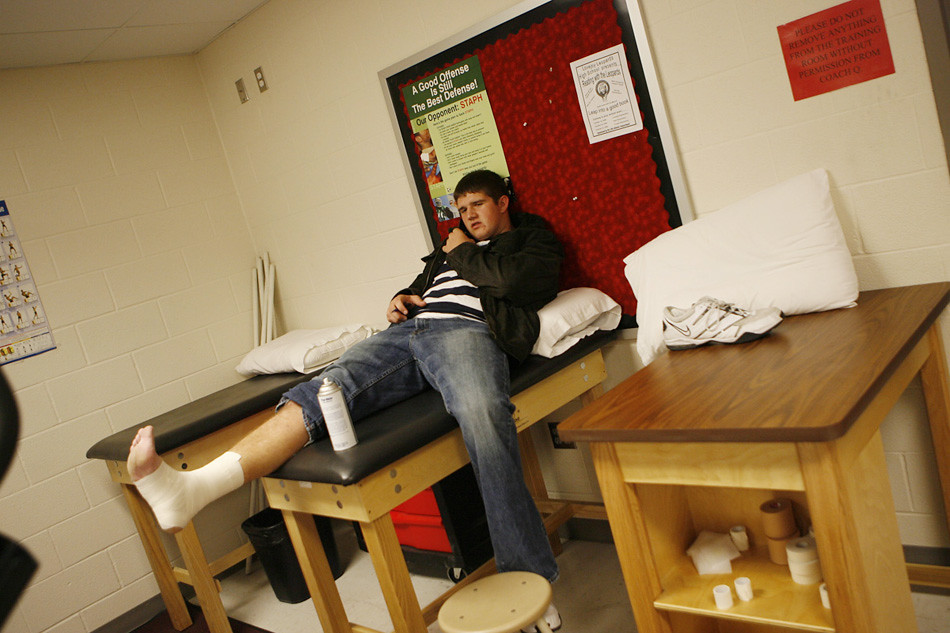 Now onto the image. Can you describe what was going
on in your mind as the image took shape, as well as what
you were thinking when you hit the shutter?

Like many shooters, I do a ton of pre-visualizing before a
gig -- usually to a fault. It's pretty common that whatever idea
I had in my head is nothing close to what's in front of me.

When I went into the locker room I was expecting Downing to
be engaging his teammates -- joking around, roughhousing,
the usual stuff that goes on in that environment. Instead, he
simply got into his uniform (and athletic prosthetic) quietly,
by himself.

I wasn't really disappointed by that, and instead chose to show
him quietly going about his business in the hustle and bustle
of the locker room. 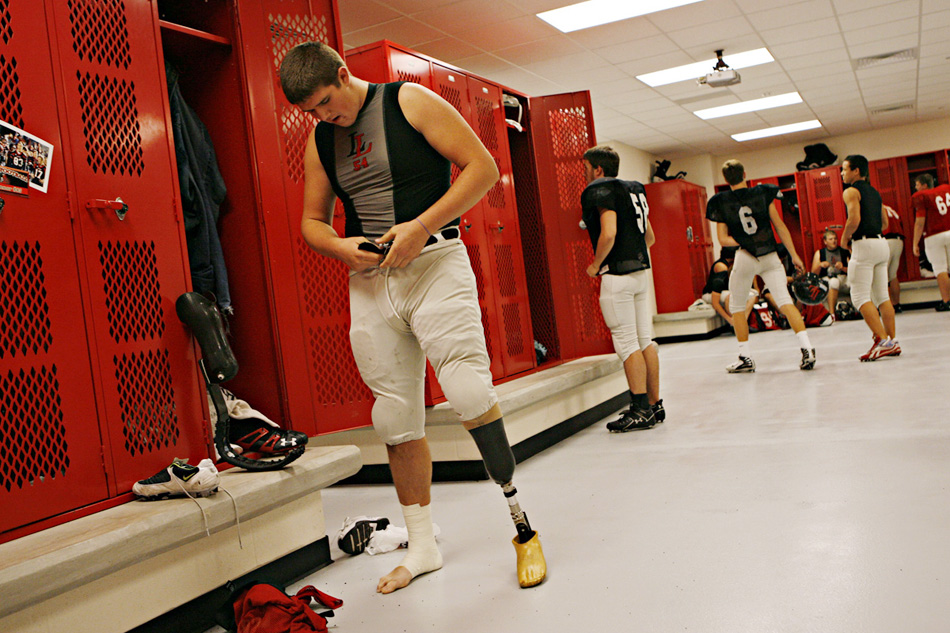 I worked the room a bit before backing off enough to see the
shoe. I wasn't even sure it was his… just hoped. At that point
it was pretty much just Downing and me in the locker room, the rest
of the kids dressed and off to practice.

I waited -- just stood there with my back against wall, and watched
to see what he'd do. After about a minute, he reached out for
the shoe. The whole thing took a matter of seconds. It's funny,
after I fired off the frames, he looked up at me and said, "You
were waiting for that, huh?" We both chuckled.

What were some problems or challenges you encountered
during the coverage of this event, and how did you handle them?

I really didn't have any, actually. I think I went into it worrying
that the experience would be awkward for Downing. Obviously
he lives with the disability, but to have someone there solely
because of it might be weird.

I mean, he could be the greatest football player ever, but the
fact that he's missing an appendage is what makes him unique
enough for us to show up. I have a tremendous amount of
empathy and respect for my subjects, and I'd hate to make
them feel differently.

And the thing about that is, it’s a pretty tricky thing to judge.
Everyone has a totally different level of emotional speedbumps.
Some people (like me) are sensitive and can’t put up with
much. Others are up for anything and can really push boundaries. 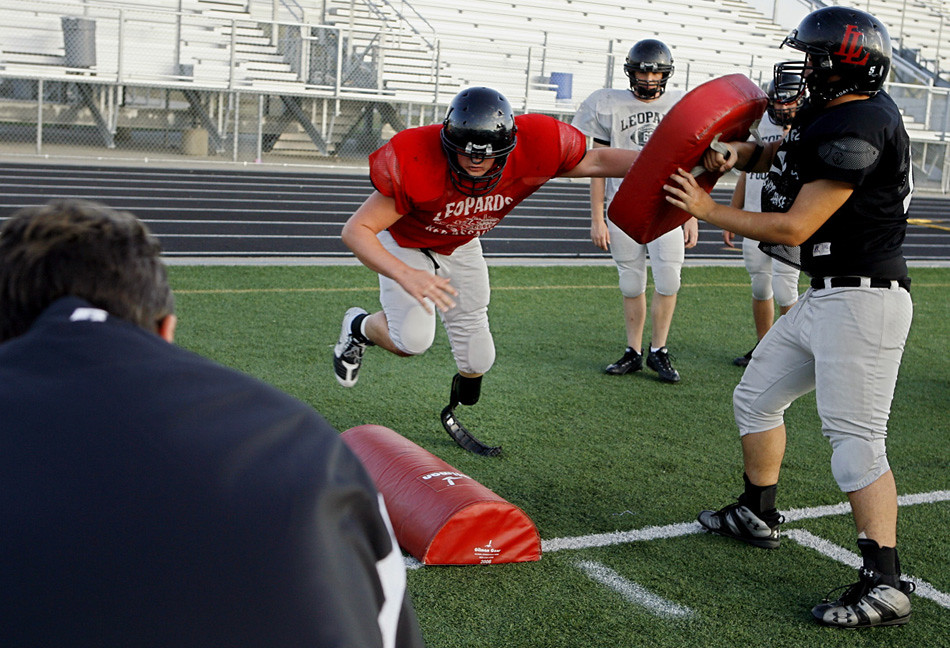 I sort of went into this earlier, but that was the main reason
I called the coach before I arrived at the school. I actually
call most of my subjects before a shoot (professional courtesy,
in my opinion.) But whenever a shoot is going to have a chance
for hyper emotion, I like to just get the dialogue rolling early.

Otherwise, it’s totally a judgment call. Will this person understand
that I’m not there to objectify them? Exploit them via my camera? All
I can do is hope and keep my “gut” on high alert.

But Downing was great about everything. Very nice, a little quiet,
but unguarded with his access. For an assignment like this, I
seriously could not have asked for a better subject. 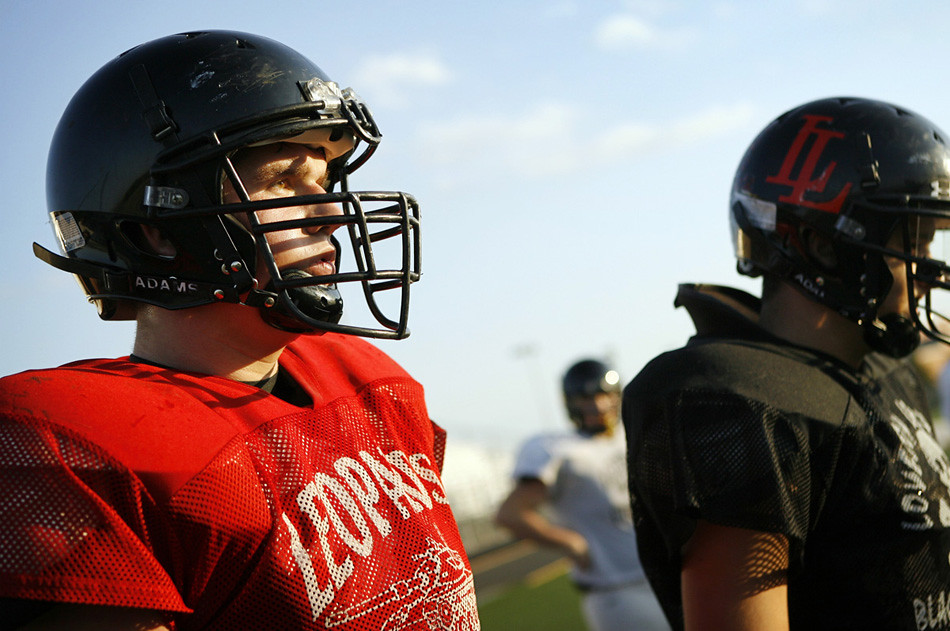 You mentioned the tension with pre-visualizing ideas - how
this can be a catalyst to momentum and excitement as opposed
to being a stumbling block when expectations aren't real (by both
you and editors). Can you discuss that a bit more?

I'm trained to work as a night photo editor here at the DMN and
do so about a dozen times a year. Back when I was taught in 2009,
I did several weeks in a row. It gave (and continues to give) me an
interesting perspective as to why photo editors get "ideas" in their
heads about shoots.

We've all been there -- you get back from your gig and the editor
clearly thought you'd deliver whatever their expectation was. But,
you were the one in the field; it's always a difficult dance.

Anyway, I noticed that my pre-visualizing about gigs got
WAY worse after I was trained on the desk. It's like I was trying to
be editor and shooter at once, which in my mind is a fool's errand.

It's taken some time and a lot of self-reflection (therapy
helps, too) but I've started to learn to deal with what's in front of
me, no matter what was expected beforehand. I'm a negative person
by nature, but have a dollop of perseverance (bordering on bull-
headed doggedness.) So when things don't go my way photographically
(or otherwise), I try to regroup and form a new attack. 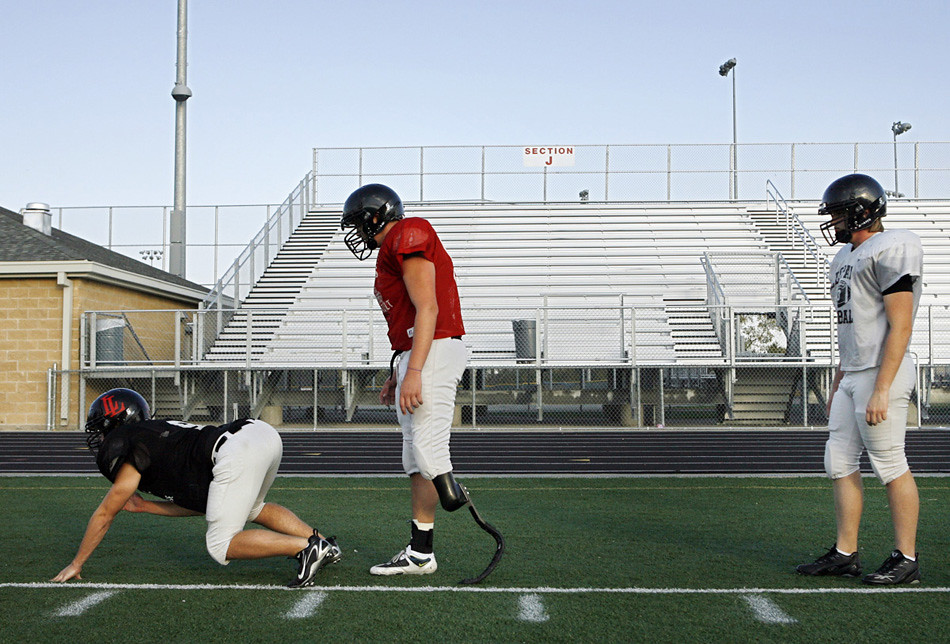 Regrouping is sort of a Zen thing, too. Any time I talk photography
I feel like I’m some sort of Buddhist. For me, it’s about completely
clearing my head. I step back, take a couple of deep breaths and
just start over. I think of it like rebooting a computer. Unless it’s a
force quit (spinning wheel of death, anyone?) you don’t lose any
of the old information – you just start anew with what you learned
and proceed in a new direction.

At this assignment, I was expecting the classic tale -- a kid who
rose to the occasion and was the hero of his peers. They'd carry
him off on their shoulders in razor sharp light as triumphant music
blared. Silly. For one, this was practice, not a game. And what's
more, this ain't Hollywood.

So when I was presented with a pretty subtle, quiet scene, I went
with it. Turned out to work.

It seems like one strong aspect of your style is a use of subtly.
There is still a "moment" but it is almost a supporting player to
color and composition. Is that fair? Can you give us some insight
into how you make images?

It's funny. After this came up in our conversation, and reading
the question again here I got to thinking that, yeah, it's a very fair
statement. And I realized I've always been that way.

Whether it was my old music theory/comp days, or the art,
cinema or prose I like, I've always gone for the more low-key,
subtle stuff. Photojournalism is no exception.

I do like the overt -- the big and bold -- as much as the next guy,
but there's something about simple and quiet in the craft I really
enjoy. I like things that require effort, and maybe almost operate
on a subliminal level -- processing information you didn't know
was there.

With this picture, in my head there's a lot going on, but it's all
sort of quiet like -- whirring in the background behind the moment.

There's the body language -- his fingers outstretched, just
out of reach. The tiptoe of his prosthetic leg balanced on the
floor. There's color play, and a little added depth with the
photos along the lockers.

And then there's my favorite thing -- the shoe itself. His left shoe,
same as the leg he's missing.

I don't know that any viewer would notice these things, and I
don't know if they'd care. But I did, in both regards, and I guess
that's enough for me.

Was there anything that you learned or put to use in later
assignments that come about from this experience?

Not to be a let down, but not really. That is to say, nothing
specific came from this gig that I hadn't already figured out
over the years. And they're all super cliché sounding, but still,
they guide me: Expect the unexpected. Have an idea of what
you want, but don't let it dictate the shoot. Let the subject
guide you. And most importantly, be present, be honest.

That last one sounds pretty obvious, but it took me a long
time to get there. Through friends and mentors over the
years I realized I was way over-thinking my shoots. Forcing
compositions and moments that didn't need to be there.

At some point, I came to terms that the most important
thing for me at an assignment was to be open to the
experience. It may make me sound like some sort of hippie,
new age guy, but when I'm at my most successful, I'm
little more than a ready and willing vessel -- present and
eager to go wherever it is we go. Along the way, maybe I'll
make a nice picture. That’s the hope, anyway.

Call me Gerry. I'm a 32 year-old staff photojournalist with The Dallas
Morning News. I shoot it all, via stills or video; film when they let
me. Before Dallas, I worked at papers in Missouri and northeast Texas
after receiving my journalism degree from the University of Texas in
late 2002. I was in college for almost six years, changed majors and
schools three times, and all I got was a lousy BJ (that sounds wrong,
huh?).

I'm a south Texas native. No, not Houston -- think further south. I
come from the land of brutally hot summers, amazing citrus and the
occasional cartel shootout.

I am married to the most amazing woman in the world, and together we
have a 10 month-old son who is magical. In my spare time, I'm a hack
musician, lousy handyman, and rabid consumer of coffee, Topo Chico,
stand up comedy, Chicago Blues and old school horror movies. I also
like cheese.

Through the power of habit I have come to view an insignificant sperm
and egg as myself.

Next week we'll feature this lovely image by Bryan Derballa: 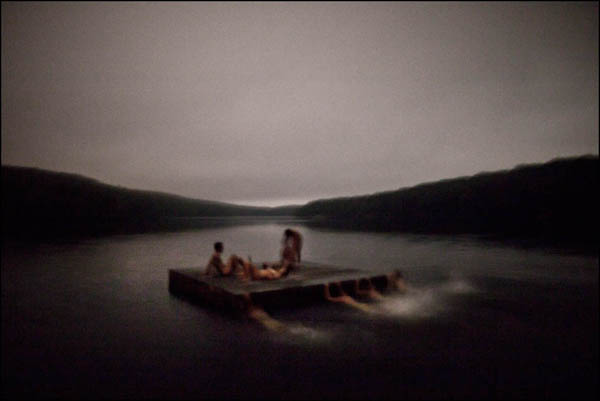