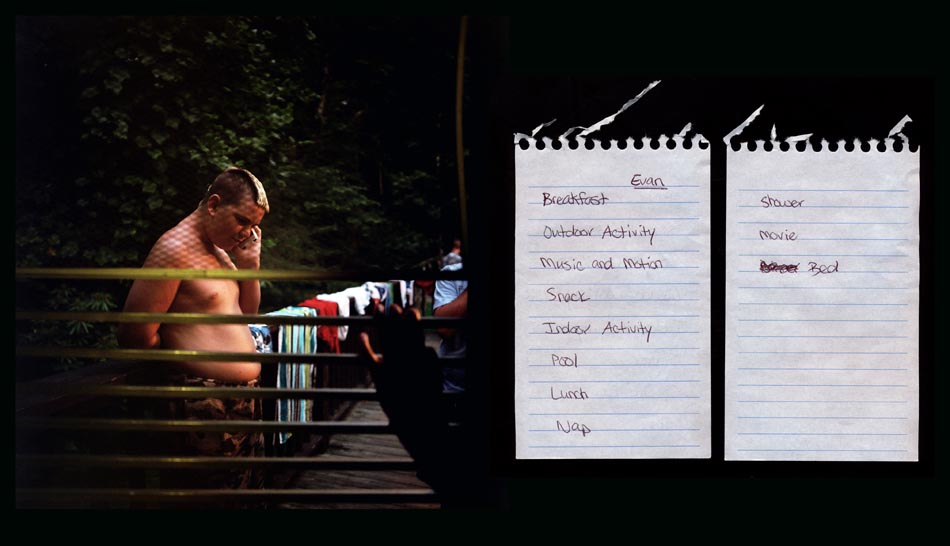 TID:
I really love this idea. Please tell us a little of the backstory of the image and the concept behind the project.
ERIN:
This series explores the different ways people with autism communicate.
I started making these portraits in 2008 after visiting what was then Mountain Adventure Camp (now called Camp Lakey Gap), a summer camp for people with autism.  I went with a reporter from my paper, the Asheville Citizen-Times, and we focused on three children as they went through their week of camp.
Back then, a good friend and former co-worker from my time working at The Morning News in South Carolina had lent me his Hasselblad 500 c/m, which had been sitting in his closet for a few decades.  It was a dreamy camera. I loved it - the way you bowed to look through the lens, the square format.  It made me think differently. I brought it with me on many assignments my first year in Asheville and I liked it because it made me slow down. So I had this camera and on one of the last days of camp I started making portraits of the kids.  By this time they were comfortable with me taking pictures so I would either catch them in action or pull them aside to make a portrait. 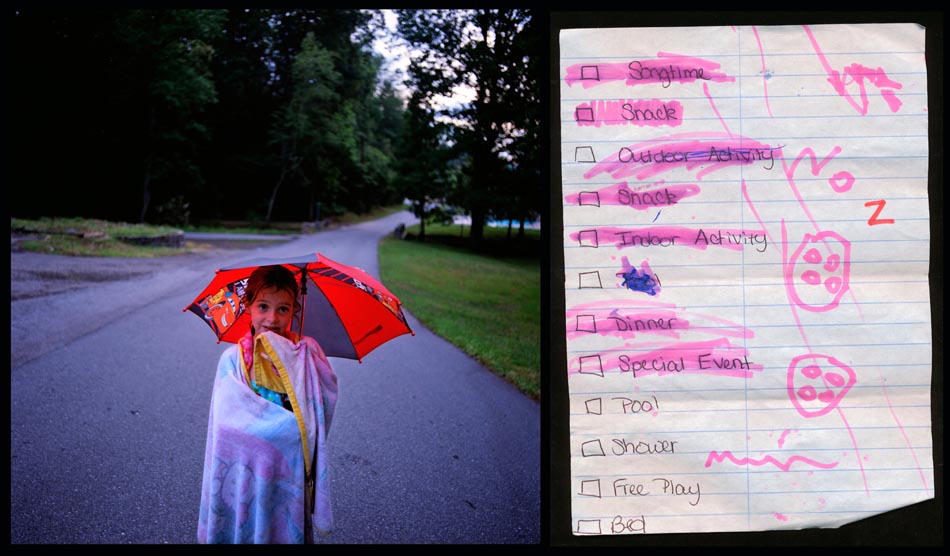 Each of the campers has his or her own counselor for the week and the counselor maintains a daily schedule for the camper.  The autism spectrum is quite wide from high-functioning people with Aspergers to more low-functioning people who don’t yet talk. These daily schedules reflect the camper’s level of communication.  Some are highly detailed and written while others are image icons.
Not only do the schedules reveal the person’s communication level, they often reveal personalities, relationships and a playfulness you find at a summer camp.  The diptych idea came to me after making those first portraits and I’ve been making them almost every summer since.
TID:
How did you prepare for this shoot, or what did you to put yourself in place to make this happen?
ERIN:
I never intended to revisit the camp after that first story but the following summer I kept thinking about the campers, the portraits and what a wonderfully unique place it is. I decided to return to begin a strictly personal project.  It was also apparent I needed an outlet outside of the daily grind of assignments at the newspaper because things were pretty tough at that time with furloughs and layoffs.  I needed something consistent and fulfilling to sustain me. 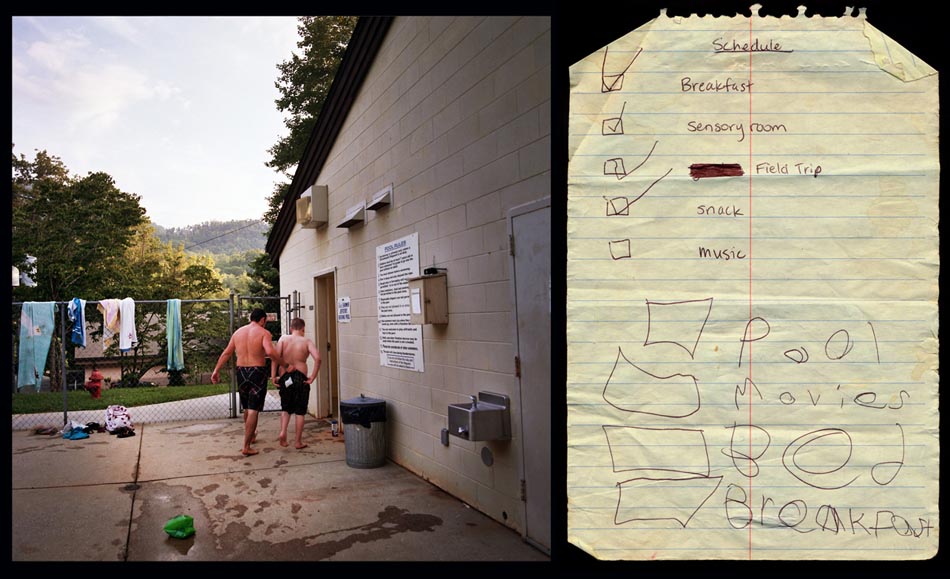 I returned to camp this time with my own Hasselblad, one I had purchased after returning my friend’s camera.  I contacted the camp director, a wonderful woman named Elsa Berndt, who agreed to let me come photograph anytime despite my less than clear explanation on where the project would end up.  I just really wanted to make pictures and learn more about these people. There are usually six weeks of camp and each week is for a different age group.  One week you have really young 5-8 year old high-functioning campers while another week is for teenagers, another for adults, and so on.
The past three summers I have been visiting camp before and after my shifts at work, trying to hit different times of day and a variety of their activities.  I use my Hasselblad, two lenses and a bundle of 120 film.
TID:
What challenges did you encounter while working on this image, this project?
ERIN:
Well some of the obvious challenges are the time constraints and the cost of film.  Planning my visits around my work schedule forces me to focus on my time with the campers, and since I’m shooting with medium format film I try not to waste a lot.  The first couple years I would play around much more but now I tend to be more mindful of my process and resources.  Rather than shooting an entire roll randomly, I try to really concentrate my work.
Also, the Hasselblad isn’t a very nimble camera and camp moves fast.  Sometimes I feel like I’m trying to travel by horse drawn carriage when I could be using a car.  You don’t know how many photographs I’ve missed because of the wrong film speed, end of the roll of film, etc.  For the most part though I think it’s a fair trade because of the richness of the format.

Another challenge is the repetition of the camp schedule.  They go swimming two to three times a day so I have a lot of pool images. As much as I love these shots, they don’t paint a very broad view of camp.  I have to push myself to visit at different times of day.
TID:
How did you handle and overcome these problems?
ERIN:
I try to stay patient.  Because I now know the environment and many of the camp day schedules, it is sometimes easy to stop thinking and just go with the flow.  I also try to engage with the new campers so I can find pictures that really reflect their personality and the way they communicate. Through the years, I’ve watched the kids grow and some of the returning adult campers and counselors remember me. I find this very rewarding and this feeling keeps me coming back.
This camp has been a wonderful stage for this series but now I want to make another push to give the work more depth.  I’m beginning to work on my plan for returning this summer and would like to start collecting audio and video.  I’m also thinking about continuing the project outside of camp by photographing people with autism in their daily lives.
TID:
Now, onto the moment. Can you talk about the moments leading up to the picture and also the actual moment? 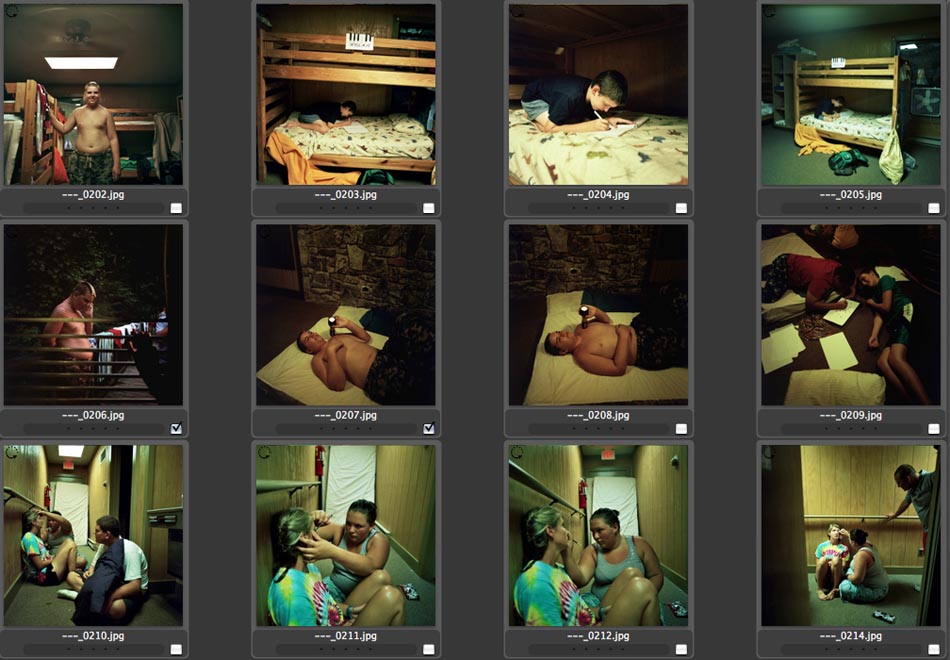 ERIN:
This is Evan and he’s talking to his family after a day at camp.  Usually the end of the day entails dinner, another visit to the pool and then everyone heads to the group lodge to settle in for the night.  The lodge isn’t air conditioned so sometimes campers will sleep in the screened-in porch.  On the contact sheet you can see Evan playing with a flashlight on his porch bed.
This particular week was for teenagers with autism.  So from the contact sheet you can see I went around the group lodge looking to make pictures of the kids winding down.  One was drawing elaborate highway maps in his bunk, another was giving a counselor a makeover.  Evan asked me to take a picture of him in his bunk room (upper left) before calling his family.  So really, the image of him on the phone is the only one I took, which is pretty lucky.  I like that you can see all the towels lined up from the pool.  You can see his nice mohawk and his camp schedule and you can kind of imagine what he’s telling his family he did that day.
TID:
What surprised you while working on the project?
ERIN:
I think the biggest thing that has surprised me is how much I’ve learned about autism and simultaneously how much I still don’t know.  Autism is very mysterious for me and hard to define.  The Autism Society of North Carolina says that close to 1 in 70 children in this state are born with autism and researchers still don’t understand the causes.
TID:
What have you learned about yourself in the process of making images like this? 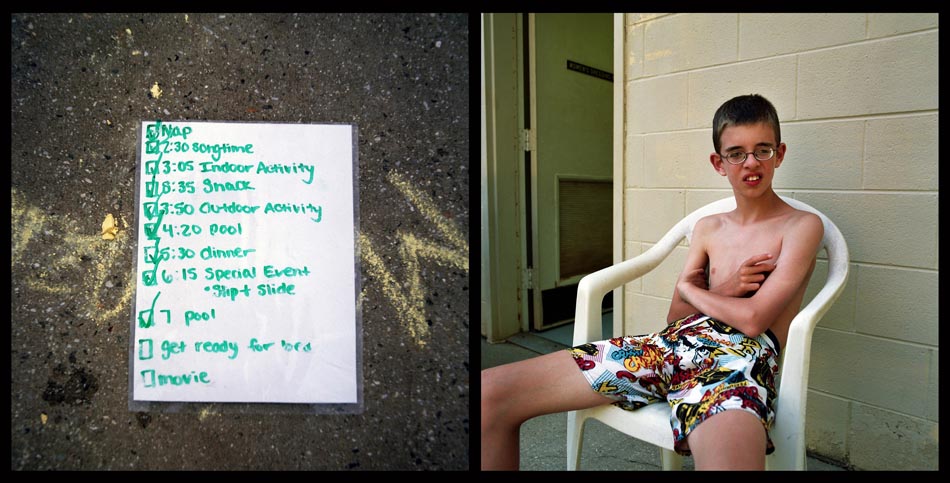 ERIN:
This project has taught me more about how to approach people.  Because it’s not an assignment or attached to a deadline, I have more time and freedom.
When people ask me why I’m there, I can’t respond ‘oh, it’s a newspaper assignment.’  I have to be clear that I’m there to make portraits for a project series that will hopefully help educate others about autism and the ways people with autism communicate.  Now that I’ve built up this body of work,  I can show them what I’m doing.  This project has helped me become more confident, which carries over into all of my other work.
TID:
What have you learned about others?
ERIN:
I’ve learned that when you approach people with respect and a clear understanding of what you’re doing, they will trust you and let you in.  You have to be honest with yourself and with your subjects.  Be clear and people will respond.  It’s a gift and a responsibility to tell someone’s story. 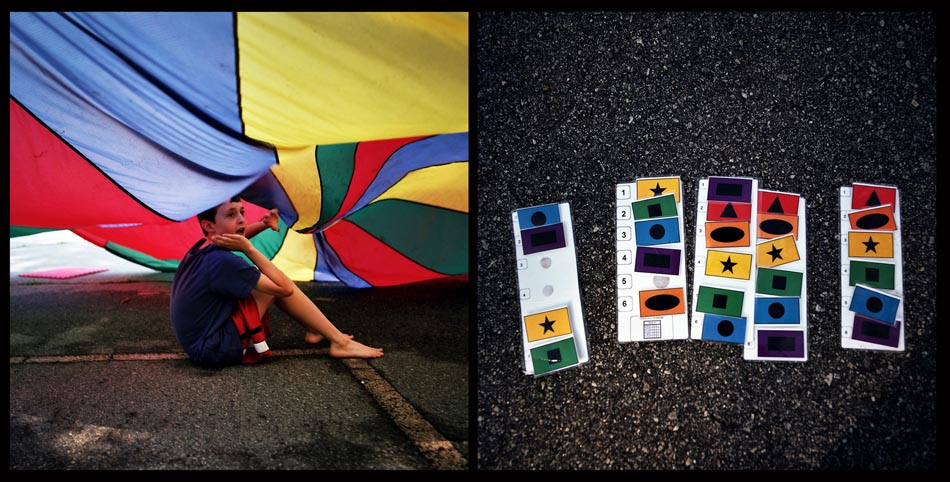 I’ve also learned to appreciate the dedication, time and love the counselors give to their campers each week.  They are what make the camp possible because they focus so much on understanding their camper.  Sometimes it’s very frustrating for both the campers and the counselors when they can’t clearly communicate with one another, but they’re always trying.  It’s amazing to witness the counselors giving so much of themselves to understand another person.
TID:
In conclusion, what advice do you have for photographers?
ERIN:
Hopefully there will be a project that pushes you, plays on your curiosity and grows your heart. A good friend and an exceptional photographer here in Asheville, Ralph Burns, recently sent me this quote:
“Each civilization, each nation, each family, each profession, each sex and each class has its own history.  Humans have so far been interested mainly in their own private roots, and have therefore never claimed the whole of the inheritance into which they were born, the legacy of everybody’s past experience.  Each generation searches only for what it thinks it lacks, and recognizes only what it knows already.”
-Theodore Zeldin, An Intimate History of Humanity
I see people caring for each other at this camp and I think that’s the great inheritance.  It’s a gift to be able to give yourself to another, to attempt to understand them and communicate with them.  Everyday I see a great empathy and a great capacity for giving.
Finally, thank you for all the hard work and care you and the TID team have put into making this blog such a great resource.  It’s been such a pleasure watching it grow and I can’t wait to see what you do in the future.

:::BIO:::
Erin Brethauer lives in Asheville, North Carolina where she is a staff photographer turned multimedia editor at the Asheville Citizen-Times, a daily newspaper where she has been working since 2007.  Originally from Milwaukee, Wisconsin, she graduated in 2005 with an English degree from Marquette University and photography minor from the Milwaukee Institute of Art and Design.  Since then she has interned with the Eau Claire Leader-Telegram (WI), The Morning News (SC), the Milwaukee Art Museum and has worked with the Associated Press.  In addition to her daily assignments, she also pursues personal work with film.  She was the president of the North Carolina Press Photographers Association from 2011 until February of 2013. Brethauer was recognized as a Magenta Foundation Flash Forward 2012 winner for this diptych series.
To see her work visit www.erinbrethauer.com
Follow her on Instagram at @erinbrethauer
North Carolina Press Photographers Association: www.ncppaonline.org