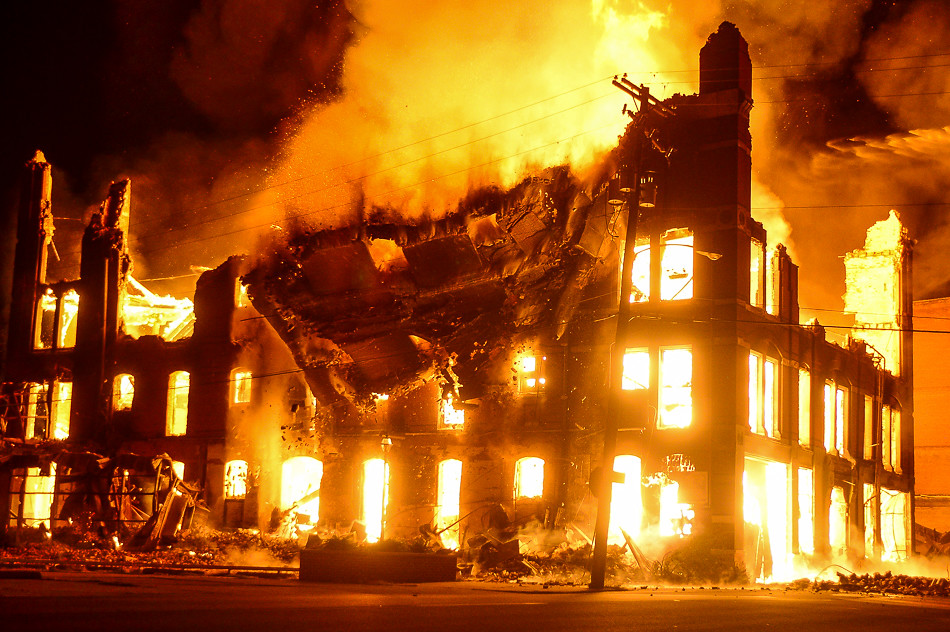 Photos by: Dougal Brownlie/ St. Joseph News-Press
TID:
This is a powerful and intense photograph. Can you tell us some of the background of the image?
DOUGAL:
Hi there, Ross. Thank you, first and foremost, for having me as an Image Deconstructed Spotlight guest. I am extremely honored and grateful for the opportunity to talk a little about these few images. My good friend Andy Whitaker introduced me to TID and how much of a valuable resource it is both in discovering new visual storytellers and seeing how they work the scene in a myriad of different ways. So a little background about the image… It had already been a long day at my job, I work for a small town paper in Northwest Missouri called the St. Joseph News-Press.
Our photo staff is comprised of two people and with my boss being gone that week for vacation it was just me running around like a lunatic. We discussed before she left that I would work 1pm-10pm on Friday but due to the nearby town being evacuated for a chemical plume I started my day at 9am. Daily work, and two football district playoff games later brought me to 9pm at night where I was packing my bag and headed towards the door when they called out ten units for a possible structure fire. This is what began the night of working the scene for a three alarm, five story structure fire that completely consumed, and by 3am Saturday morning, destroyed a historical building downtown.
TID:
How did you first get the call for this and how did you respond (I understand it was an after hours assignment, correct?).

DOUGAL:
So you are correct that it was an after hours assignment. When we were all in the newsroom we heard the call for ten units and at an address downtown. Friday was my one year at the paper and since starting at this job, I have covered more breaking news from fires, to standoffs, accidents, to shootings, so I was ready to go and proceeded calmly to my car. I carried in a thinktank bag a D4 with a 24-70mm and a D750 with a 70-200mm, five extra batteries, and seven cards ranging from 8GB to 32GB in size.
The address in question was about a four minute drive from the newsroom so as soon as the call went out, I was out and driving to the location, parking my car away from EMS, fire trucks, and emergency personnel, but close enough that I could walk easily to my car from where the structure fire was happening. When I showed up, the building looked normal and nothing seemed too out of hand. It wasn’t until I walked to the side of the building where the lead image was made that I knew that we had a possibility of a huge fire.
The downstairs was fully engulfed in flames and an hour later the whole building collapsed, bringing with it bricks, shattered glass, dust, downed power lines and power outages, as well as heat that pushed even myself, an eager breaking news visual journalist, back.
TID:
I’m always interested in how photographers problem solve. What problems did you encounter and how did you work to overcome them?
DOUGAL:
I think the biggest problem that I struggled with was that I forgot that I was there to make a story telling image and got caught up in flames, fire, and the enormity and size of the fire. I think I must have gone through 300-400 frames of images that all looked very similar the only difference was perhaps one was a little darker or brighter than the next dozen or so.
I wish I could have taken a deep breath, relaxed, and realized I had incredible access and to shoot the fire from all angles, and looking for civilian reactions, exhausted firemen, and created a story that told of what this historic building meant to those watching it burn to the ground over the course of six hours. 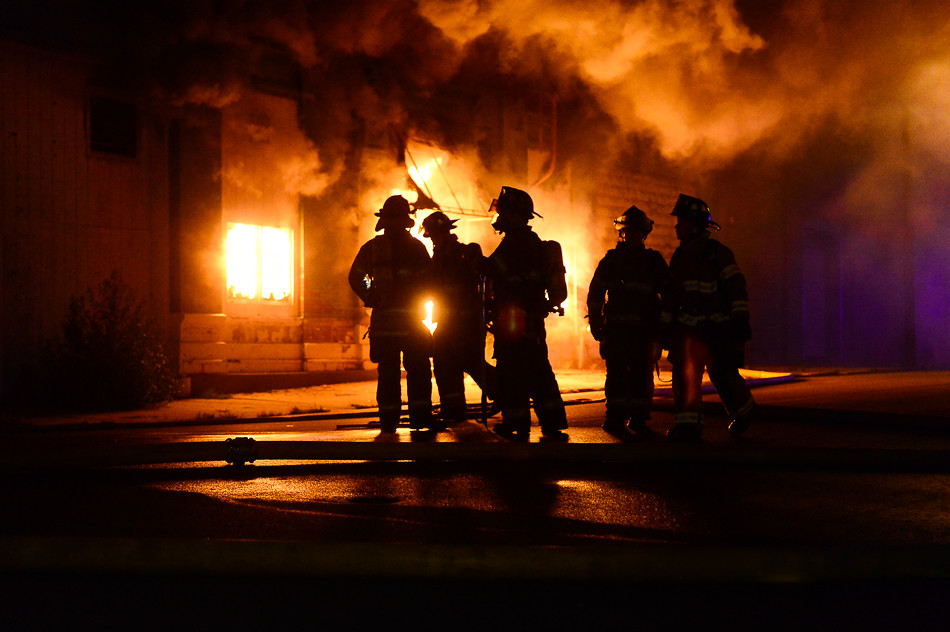 I think the way I overcome something like that is to be a part of it and learn from those mistakes, pick myself up and remember for next time to apply context and story to my work. The other major issue I ran into was that once the fire was at its peak and I had gotten frames that would work for print and online, our copy desk and digital editor needed me back in the newsroom with ten minutes to deadline.
It was chaos with swarms of people everywhere and I had to make my way carefully back to the newsroom and also at the cost of losing my coveted spot that was so close to the breaking news. If I could have done it differently, I would have brought my laptop with me and transmit in the car and return to the breaking news as soon as my photos for print were filed.
TID:
I always tried to learn something from shoots, and one of the things I looked for what was surprising to me. What surprised you about during this event and what did you learn from it?
DOUGAL:
I think what surprised me the most about this event was that in the past at breaking news events, visual storytellers and other members of the media are pushed back out of fear for safety or because of the event being under investigation. This event we were moving ourselves back because of the extreme heat that the building was producing.
Even with the extreme heat, I was still only about 1,500 feet back from a building that had windows shattering, bricks falling, and eventually the walls buckling and collapsing under the heat. 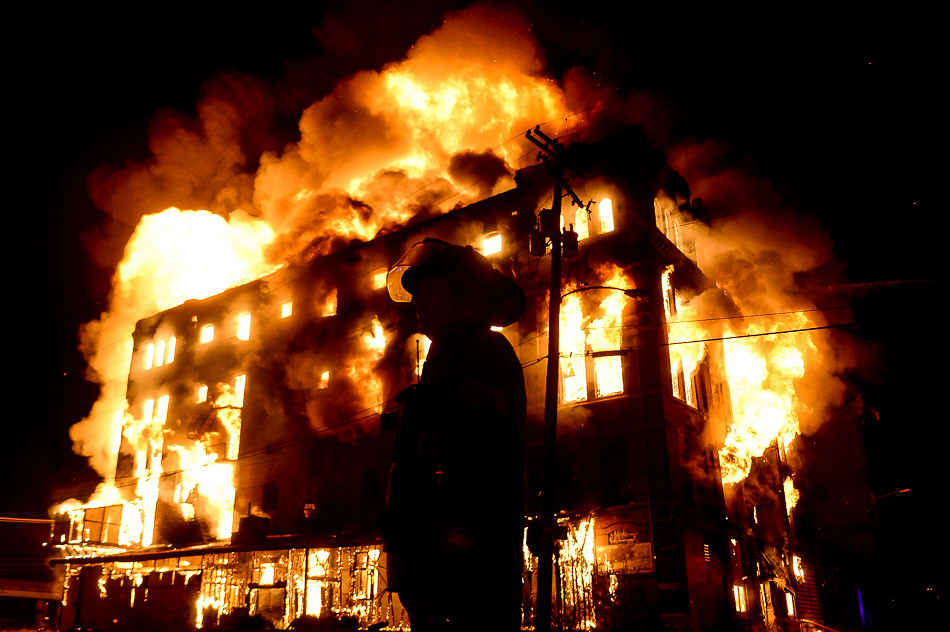 It was an incredible feeling getting full access to such a huge fire and only being advised to move back but never once was there police tape, officials, or any form of law enforcement pushing us back until around 11:30pm when the powerline came down and was still pulsing electricity and they asked us to move away from it as it could kill us.
TID:
What have you learned about yourself and others from situations like this?
DOUGAL:
I think what I learned about myself was for the first time I wasn’t fumbling on settings… Sure I had a few moments where my shutter speed was higher than it needed to be or the image was too bright or dark, but I was more focused on the fire and looking for what was happening rather than scrambling to adjust various camera settings. The other thing I learned about myself was how calm I was in the face of such a huge event.
A year ago, I would have dropped a camera, maybe broken a lens, or jammed a memory card in the wrong way bending a pin. This time, I was prepared, knew what was happening. At the end when I left for work at hour seventeen, I was still level headed, focused, vigilant, and aware of my surroundings which I thought when I was covering the event I would be exhausted and it could have been very dangerous with how worn out I was, but the human body is amazing in what it can be pushed to do.
TID:
Now, back to the main image. Can you walk us through the moments leading up to it? Additionally, can you talk about what you were thinking while making the image?

DOUGAL:
So the main image came around at the peak of the fire and everyone was watching as the main front of the building collapsed and fell. I knew I had to get closer and with a motor drive to capture the full impact. So I spot metered for the highlights knowing I could recover shadows later on, and tried to frame it up as it fell. The moment lasted all of maybe three seconds and once it was over I looked back at the LCD screen, knew which one looked the strongest, tagged it, and then was told I had ten minutes to make deadline for print.
In hindsight, I got way too close, and it posed a huge risk but the reward was coming away with an image that I felt showed the severity of the situation. The one really big thing that helped me in getting this main image and getting it out for deadline in a timely manner was using the vivid mode for JPEG. Of course I shoot RAW+JPEG for everything but the moment I got back to the newsroom that image was processed already and all I needed to do was add sharpening for print as well as bring up the shadows slightly and it was good to be filed and transmitted.
TID:
In conclusion, what advice do you have for photographers in covering situations like this?
DOUGAL:
I think the biggest advice I can give photographers covering events like this is to trust yourself, to remain calm, and be safe. I mentioned the broken pin in the camera, that actually happened to me during my first breaking news event in college. I was so ready when I got the call of a rollover accident that I rushed out, pulled up to the scene, and jammed the card into the camera the wrong way. As a result, missed out on a fatal accident due to not remaining calm and collected.
The other piece of advice I have to give is realize that breaking news is where people are often emotionally or physically damaged, and to be really considerate to that fact. It’s easy to go around ripping through frame after frame but also remember it’s someone’s livelihood or even life that you are documenting. Be a human and a good and compassionate human before you are a photographer. We all deserve respect and dignity, so remember that your camera is a device to evoke feelings, so make the frames count and tell a story. 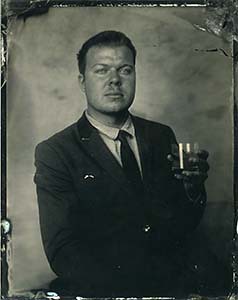 Dougal Brownlie is an award winning visual journalist from a small college town of Bellingham, Washington, an hour's drive north of Seattle. In the fall of 2012 Dougal took the opportunity to pursue his love for visual storytelling and move to Ventura, California to attend Brooks Institute and pursue a Bachelor of Science in Visual Journalism.
A Washington state native, Dougal began his professional career working freelancing for smaller papers in and around the Ventura county area including the Ventura County Star and Ojai Valley News while he was in college before he accepted a job at the St. Joseph News-Press as a full time staff photojournalist in October 2015. His work has been published in national and local publications, including Sports Illustrated, USA Today, ESPN, The Associated Press, Yahoo Sports, Business Insider, Washington Post, Palm Beach Post, Omaha World-Herald, Lincoln Star Journal among others.
When he is not on assignment, Dougal can be found exploring and looking for a new story, driving and stopping in small towns or big cities, exploring the rural Midwest, listening a myriad of different music, enjoying some new restaurant with food and drinks, or meeting like minded visual storytellers. He is always open for a conversation or freelance assignment.
You can see more of his work here:
www.dougalbrownlie.com
IG: @dougalbrownlie
Photo credit: Lindsey Ross