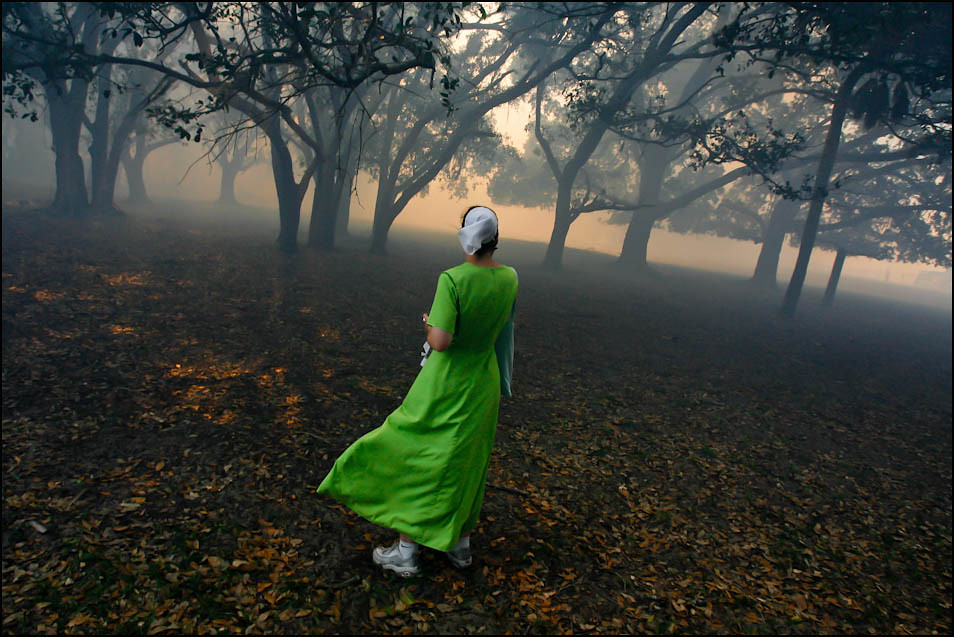 Thanks for having me, Ross...love The Image, Deconstructed.
Great information from some really amazing photographers.
I used to carry a scanner in my car way back in the day and
was a major spot news hound.  I would chase anything and
everything.  As I learned quickly, spot news is mostly hurry-up,
get told no, and then stand around for two hours. Most useful
photos are made within the first few minutes of arriving, the
rest is spent trying to get a PIO to give you some semblance
of information about what you are shooting.

I was having lunch, when I starting noticing plumes of dark
smoke rise along the highway from outside the window of my
home-away-from home, Chick-fil-A.  Knowing my community
and all its back roads came in handy, as I sped out east to see
what was going on.  A few calls to the newsroom confirmed it
wasn't a prescribed burn, which most of the time it is, so I knew
there was a big blank rectangle somewhere in the newspaper
for a photo.  I was there before roadblocks (photo-blocks) were
put up, so I was literally able to drive right into the blaze, which
was swallowing up trees and brush alongside my car and
threatening a subdivision of homes nestled right in the middle
of it.

I knew I was in the right place when just in front of the wall of
smoke and fire, I saw two women in shadow running along the
fence line in their backyard - one in bright blue.  The other in
bright green.  The photo gods threw me a bone for leaving my
lunch behind. 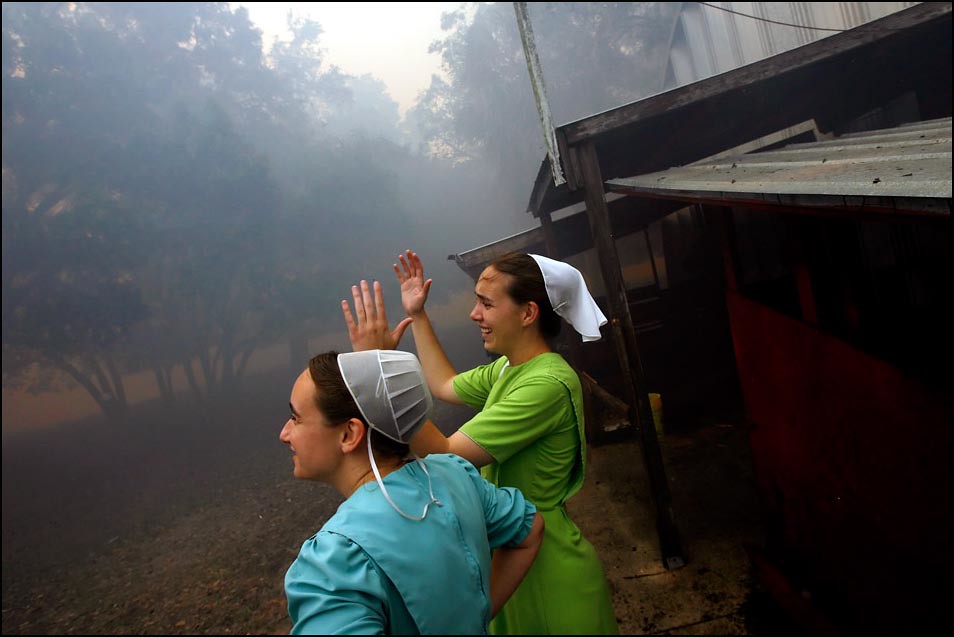 Ok, now onto the image. Can you describe what was going on
in your mind as the image took shape, and then also what you
were thinking when you made the image.

I believe it was Melissa Lyttle who told me once that she thought
I carried Mennonites in my trunk for when I needed a person in
a photo.  I didn't have any of them (this time), but I knew there was
potential for a photo once I saw the splashes of color against the
darkening background.  I'm a color addict, so once I see it and
want to use it, I tend to just concentrate on that aspect.

I had been shooting for at least an hour before this, so I knew I
had plenty of your standard flame-on-tree, helicopter-with-bucket,
fireman-pointing-at-fire photos.  I don't want to reduce a scary event
like a fire to a joke, but when you cover so many, they become one
in the same.  That's true for a lot of gigs at the newspaper.  My goal
every time I was sent out to make photos was to come back with
something that I liked to look at, and perhaps runnable. 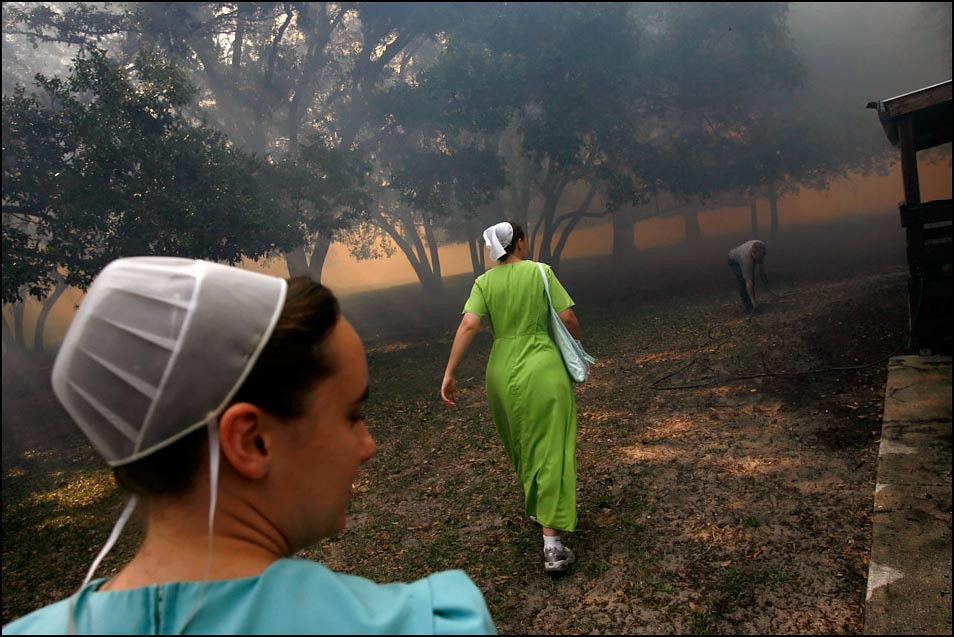 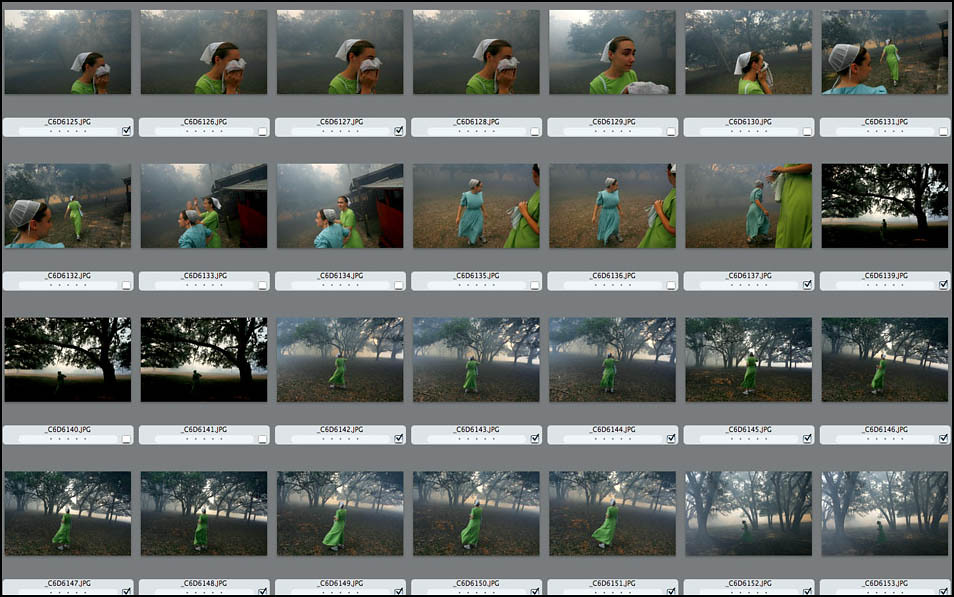 Literally that is it.  When I am in a situation that I know is unique,
I tend to just blank out and concentrate on color, light, and
composition.  Reducing the photo to these essential elements
for me is what works.  If a good moment slips in there, then sweet,
but moreover I'm more concerned with setting the stage and
letting life do what it may.

In the end, I just shadowed her for as long as I could, making all
sorts of wide frames of Joyce watching the fire swallow up the
forest behind her house.  After while, the backyard became a very
dark, Burton-esque landscape with a splash of green floating in-
and-out of my frame.  When the wind would gust, her dress would
catch it, so I just moved into a spot where no trees would intersect
with her body language, letting her breathe a bit.  I was standing
on a cinder block so I was able to get just high enough to keep
the separation there. I'm extremely anal about my compositions:
a place for everything and everything in its place.

You mentioned in a previous email about how you thought this image
represented for you the thought of "not abandoning your vision, even at
spot news." What does this mean for you? 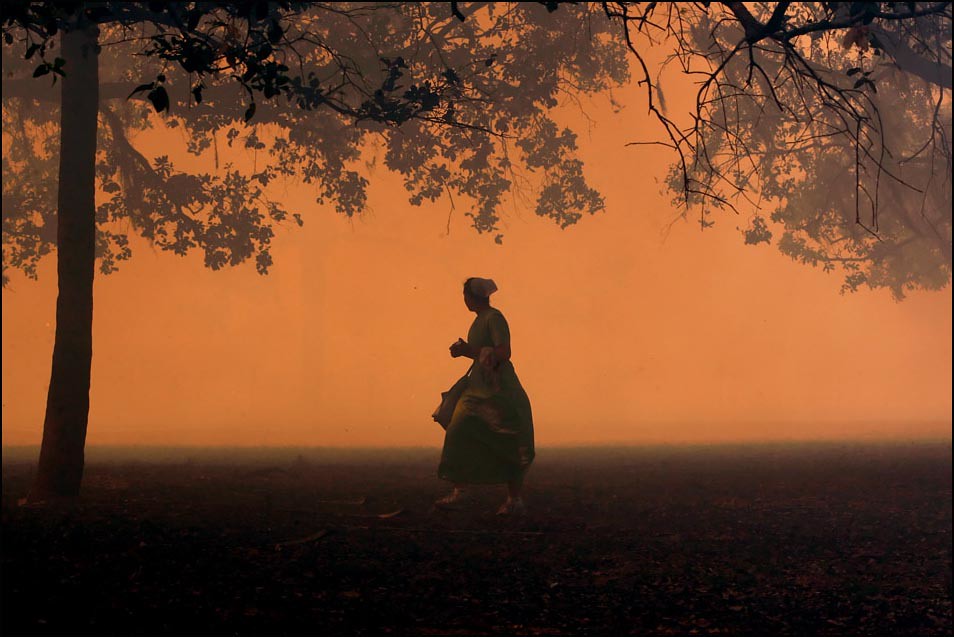 I don't ever want to just purely document.  I want to see and destroy.
Even at spot news.  Nothing good can come of making the same
photo every time.  I've seen so many accidents, so many fires, so
much sadness that I have to zone myself out and make it purely
compositional to come up with something different.  That just doesn't
apply to spot news, but in everything we cover as photojournalists.
It's not about winning a contest or the proverbial pat-on-the-back
from The Man.  It's about making images that satisfy myself visually
first and foremost.  I don't ever want to shoot like someone else,
because I am not.  It's the one thing each of us has in this field is
an eye.  A vision.  A way we see things.  It's more important than
a splashy business card or that random new piece of gear I could
care less about.  In the end, it is all about the rectangles.

The people in the photo matter.  They are someone else's loved one.
I try to respect that by at least making a photo that make readers
want find out more and perhaps help and/or learn from it.  The only
way to do that is to sucker them into reading eight inches of text
with some eye candy.

Most spot news contest winners tend to be really awfully composed.
They are great moments, but composed as if my toddler shot it.  It
is getting worse with the iPhone stuff out there (no, not Hipstamatic -
relax).  I'm talking about "user generated content."  Everyone has
a camera with them. Everyone.  Newspapers will run it.  They'll
take it, not pay for it, and run it.  What the millions of people have
that you don't is reach.  What we have that they don't?  Eyes.  Well,
physically most of them have eyes.  They don't have vision, they
don't have a point-of-view, they don't have that squishy pink thing
you have in your skull.  That is uniquely yours.  Use it.  It really is
the only way to survive.

What were some problems or challenges you encountered during
the coverage of this event, and how did you handle them?

The only challenge I had was physical.  I had to figure out how to
trespass in order to get permission to trespass.  That's harder than
it sounds. When I saw the Sauder sisters, they were a football field
away from me.  I had to get the courage to bury my head, act like
I belonged where I was, and head straight into their backyard to
see if I could hang with them as the fire approached their house. 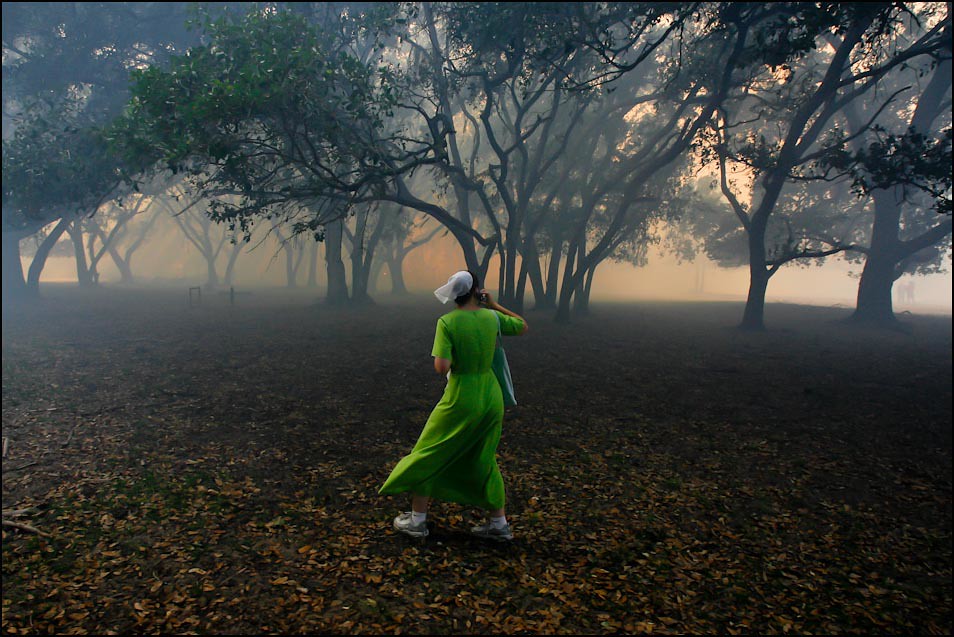 Luckily, they were fine and were as transfixed by the Sleepy Hallow-
ness of the scene as I was.  They were taking photos themselves
even as the fire ripped through their backyard, so I knew they
understood why I materialized there.  I still asked.  Always ask.

In general, most people shoot first and beg for forgiveness if they
do something wrong.  I usually just try to be a human, know where
the limits of what I can/can't do and work around them.  In this
instance, I had to break a rule in order to make a photo.  Worth it?
I don't know, but it looked sweet on A1, and I didn't have to be a
jerk in order to make it.

I came back a few days later and dropped off a print - she came
out in a another dress.  It was grey.  We joked about how the
green dress worked better. 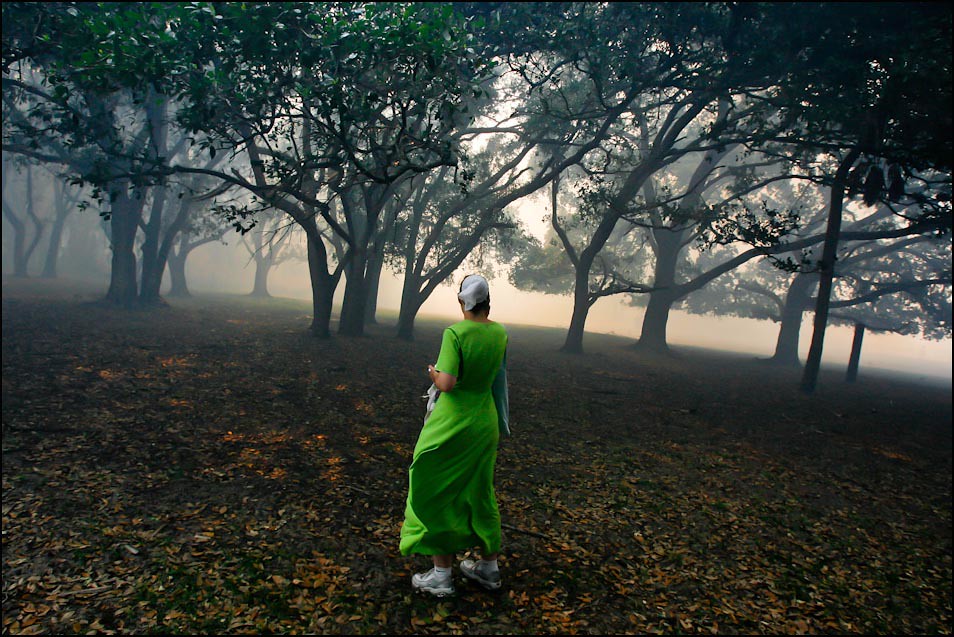 I'd like to hear your thoughts also about how you approach
much of your work. I have always been impressed by your
use of color and composition. With that, can you lend us
some insight into how you make images?

I approach my work as if I don't have anyone hiring me to do
it.  I didn't always work that way, but I am now.  I don't want
to even press the shutter if it doesn't fit what I've developed
as my vision.  Sometimes I have to, and it's sickening. I break
down a scene before I even start shooting.  I look around and
find that one element that will make or break a photo.  It might
be some random person's red shirt or a tiny patch of window
light hitting someone.  I try to find that key element (i.e. green
dress) and abuse it.  I'll bypass what could be really wonderful
moments at some point to get to a wall or pocket of light where
something may or may not happen.  If I'm wandering for a
feature or street shooting, I scribble down intersections, times
of day, etc., so I know when to come back and stalk.

Color is king over anything else in my work.  Following closely
by composition.  Then light.  Then moment.  This is just me, but
a moment is worthless if its surrounded by sloppy composition
and light.

The advice I have for anyone out there struggling to find
themselves and develop that vision they can call their own is
to really stop and think before shooting.  It doesn't matter if you
are at breaking news event, sports, or even a meeting at city hall.
Seriously, just stop.  Then think.  In the end, you might make less
photos, but it should be about making The Photo.  Thinking about
everything you are including is way more important that including
everything.

The world would be a much better place if everything was painted
a different primary color.  I just wanted to say that.

Chip Litherland is a self-diagnosed color addict. Pretty much sums it up. He is also an award-winning photographer based in Sarasota, Florida, with over a decade of experience working in photojournalism. He is a contributor to The New York Times, The Wall Street Journal, The New York Times Magazine, St. Petersburg Times, TIME, and ESPN the Magazine. His work has been recognized by Pictures of the Year International, Best of Photojournalism, Atlanta Photojournalism Seminar, Southern Short Course, and the National Press Photographer’s Association. Chip is married to his lovely wife, Elaine, and they have two beautiful daughters together. He is on a 12-step-program to break the cycle of addiction to random gratuitousness, filling rectangles with extremely anal compositions, and sick perversion to oversaturated color. Apparently, he also rants on his blog from time-to-time with a wide range of topics from the evils of Hisptamatic to the death and/or rebirth of photojournalism - depending on the day.

Next week on TID, we'll take a look behind this unusual image by Justin Cook: 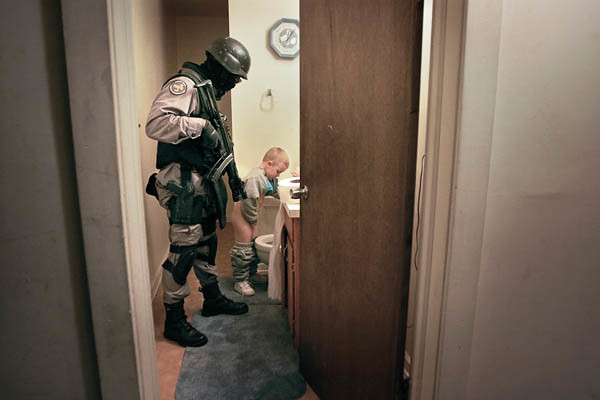