In the wake of yet another death from the coverage of the conflict
in Libya, it seems even more appropriate for this Saturday's post.
This week, we're taking a break from the normal path of examining
one picture and the mentality behind it, to the mentality of covering
a single theme - covering the news in Libya.

I'm thankful to Angelos for taking the time to lend insight to his
time there, as well as to all the photojournalists who have died
in Libya, including Chris Hondros, who was not just a friend, but
someone who helped show me, and others, the reality of war.

Thanks so much for being a part of this, we're excited to hear your
insight into what it's like to working in such a difficult situation.

Lets start with getting some of your background of why you went
to Libya in the first place. 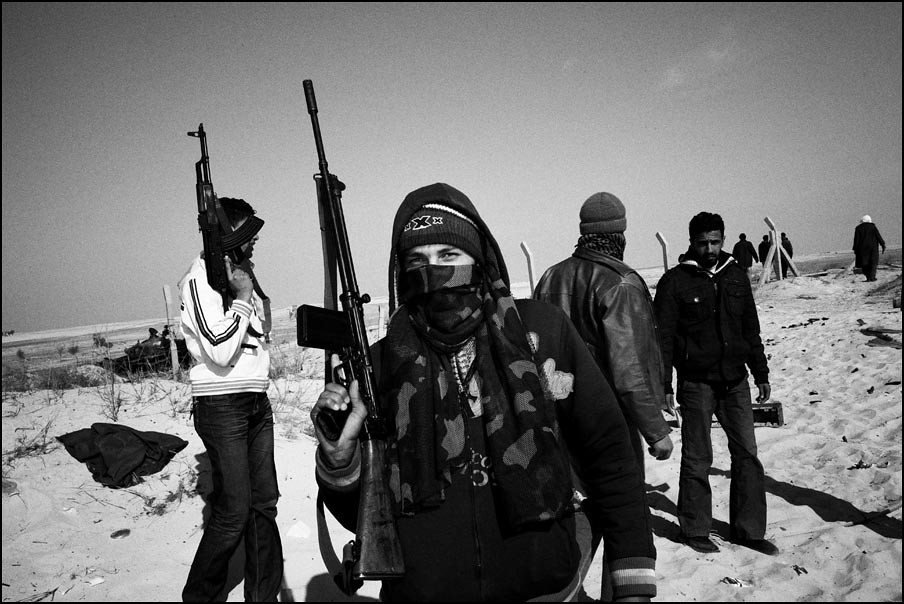 I would like to thank you for giving me the opportunity to share
my experiences and reflections on such a special story as Libya.
Anything that happens around me draws my attention and
intrigues me to follow it. My motivation for following the story
in Libya was my interest in the fact that one man could spread so
much fear and insecurity to his people, finally turning his military
forces against his own people.

I proposed the story to the greek magazine ''KAPPA'' and I was
assigned to cover the conflict. I traveled 7-hours from the
Egypt-Libyan border to arrive at the city of Benghazi, a deserted
city where the people were concentrated in the central Tahrir
( Freedom ) square - the main gathering point against the regime.
There were no certain feelings at the moment, only questions on
how I would set the pieces together and describe the situation -
and a certainty that the feelings to come would be constant and strong.

When you arrived in Libya, what was going through your mind?

After entering Libya, I spent a night at the city of Tobruk. My
thoughts and worries were focused on what I would face upon
my arrival at Benghazi, and on my efforts were on getting the best
contacts. The risks of being a freelancer are enormous and no mistakes
are acceptable if you want to have a good result. On the way to
Benghazi, there were no signs of war except some checkpoints,
which grew in number as we approached our destination, as well
as my concerns.

Now, onto, some of the images. We've all seen so many war
images that we almost become numb to them. Can you tell
us what it was like for you mentally as you began to making
these images?

After settling in Benghazi, on the first morning there was the
rumor that the city of Ajdabiya has been reclaimed by the rebels.
I worked to secure a driver ,and I reached the spot as soon as
possible. The defeated army of Colonel Gaddafi had been hit by
the French air force on the outskirts of the city and the first signs
of the defeat were obvious from distance. Smoke was rising on the
horizon, and as I approached, the smell of burning oil filled the air. 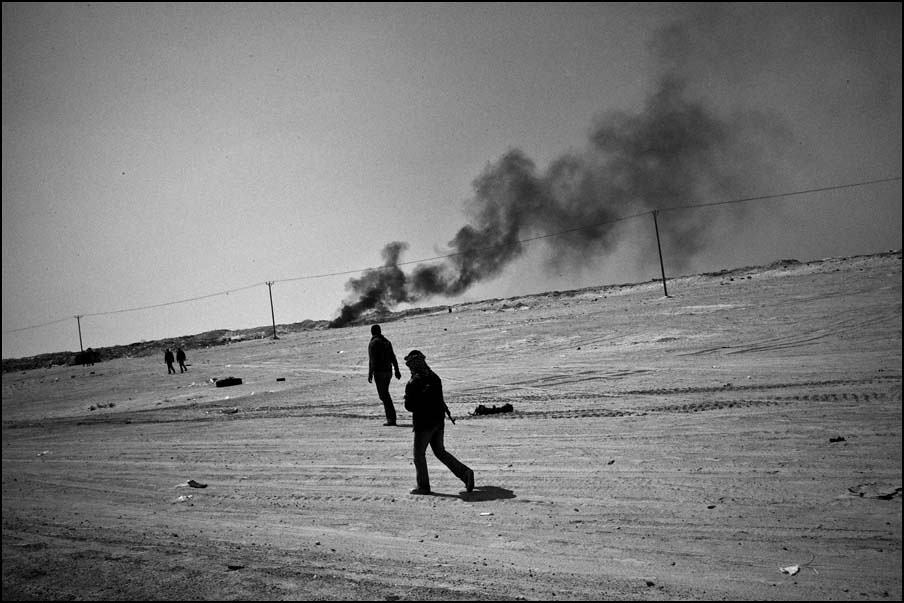 I didn't shoot at first, I only observed the joy of rebels
over the death of their enemies. Seeing dozens of mercenary
bodies, others incinerated, others totally deformed, created
a momentary shock that was overpowering. The question that
still bothers me is whether it's worth getting paid to kill, or be
be killed, with money as your only motive.

I totally agree that war images have entered our daily lives, and
it's easy to ignore them, but I am certain that there will be some
people that will see them and be concerned about it. That's part
of why I do this.

It's obviously very dangerous there, can you talk about your mental
approach to photographing in such difficult places?

In such occasions as Libya, the conditions for photographing are
very difficult; the feelings and the approach can change instantly.
I always try to take images that could generate questions to the
viewer and fill them with many feelings. You must remain
concentrated so that you could cover your story with the same
personal tempo, in order to have a coherent result. I try not to
be carried away and I approached the image in front me as
news, telling the story through what was I seeing, while keeping my
own feelings personal.

In my opinion, this is the most difficult factor of keeping your work
under control. 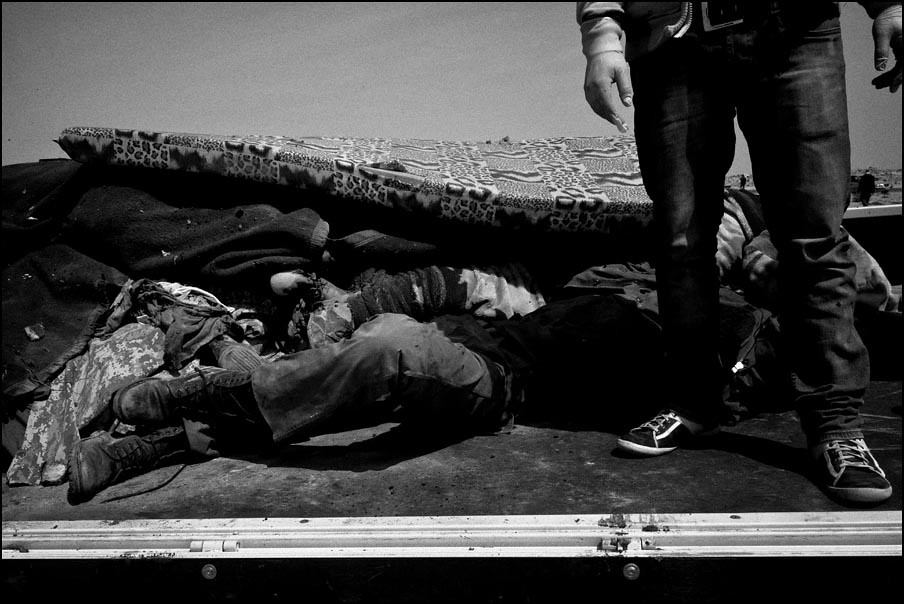 What surprised you about covering this conflict?

When you cover such stories, you are often present to very
unfamiliar scenes that can stun you and show you other aspects
of everyday life. In Libya, I was surprised by the fact that there
were people without any substantial military training and
organization but full of enthusiasm and faith on liberating from
a cruel regime. The people were also very open to the western
media. There  was an unprecedented need for telling their
personal stories and a constant effort to condemn a regime
that was killing its own people.

Since this is an educational blog, can you please explain
logistically how you cover a conflict like this? 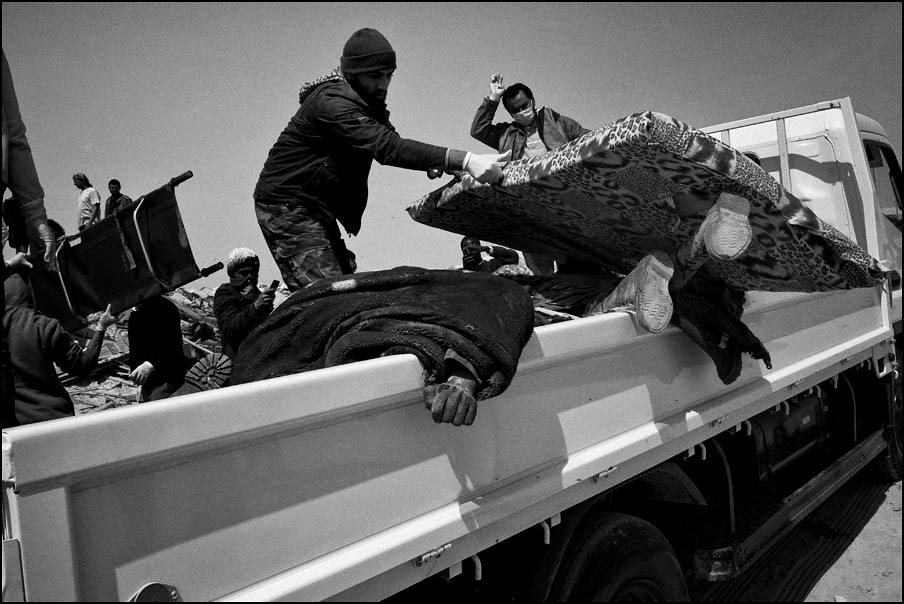 Before starting your journey for covering such a conflict, you must
get the best information that you can. You should get a better knowledge
about the country's history and how things devolved into to a situation
like this. You must learn how you can access the main spot of the story
with safety, as well as the possible dangers. Moving safely is so important
because when there is a constant change of the frontline, you never know
whether the area you are moving is safe or not. One of the most important
things to know is about communication in this country. Is there a working
telephone network and any internet networks online?

If not, having a satellite phone could save you from very difficult
situations. After gathering this information, you prepare your gear
for your journey. My opinion is that you should be as lightweight
and compact as you can be. One backpack containing with one or
two pair of clothing is sufficient. One small plastic bag with
medicine that should include a general antibiotic, painkillers,
vitamins and medicine for intestinal disorders and poisoning.

The photographic gear depends on the photographer. For me,
2 dslr bodies and 2 lenses are adequate to cover my story. A
laptop, a map, phone and battery chargers, memory cards, a card
reader, a portable HD disk,if possible two for taking better and
safer backups must be included in your backpack. Finally, one
of the most important things to consider is the money that you
should take with you. Many unexpected events could cost you
more and exceeding your budget is almost sure in any occasion.
When you are thinking about if you should take something with
you or not that could prove necessary, just take it. It is better to
carry something extra with you in case you should need it than
not having it even in the most simple occasion. Always remember
that the smallest detail could prove lifesaving. 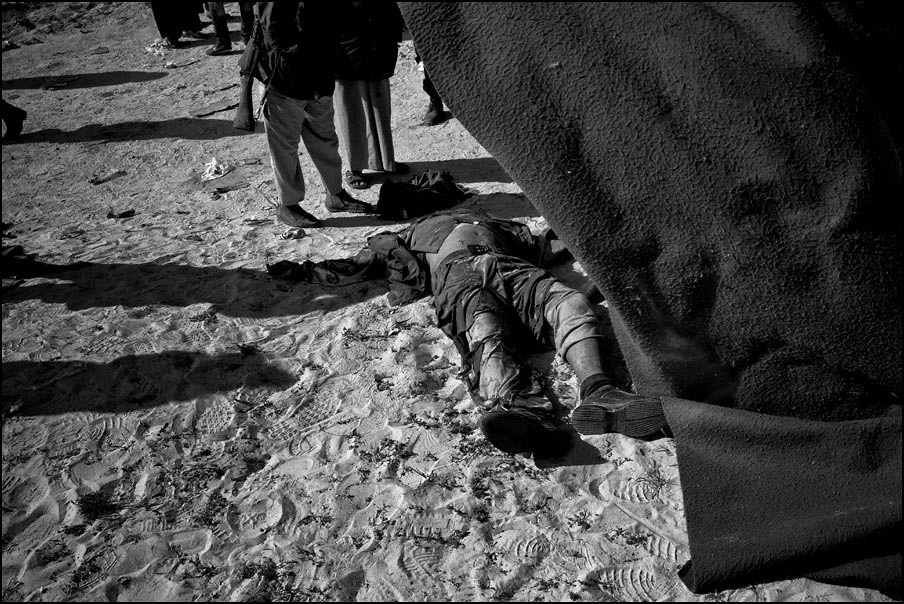 Were you ever scared, and if so, how did you handle it?

Fear must always be present is these situations. Always be aware
of the situation around you and be alert for any invisible dangers.
Fear should be your shield and not a burden. The most fearful
situation for me was after the fall of Ajdabiya, when the convoy of
the rebels was moving towards Brega. Colonel Gaddafi's forces
launched missiles and tanks shells that hit the convoy near me.
My first thought was to cover and take a quick look around me.
Then, I waited for 2-3 minutes in order to avoid the panic of the
rebels' retreat and I searched for my driver in order to leave the
spot to a more safer position. 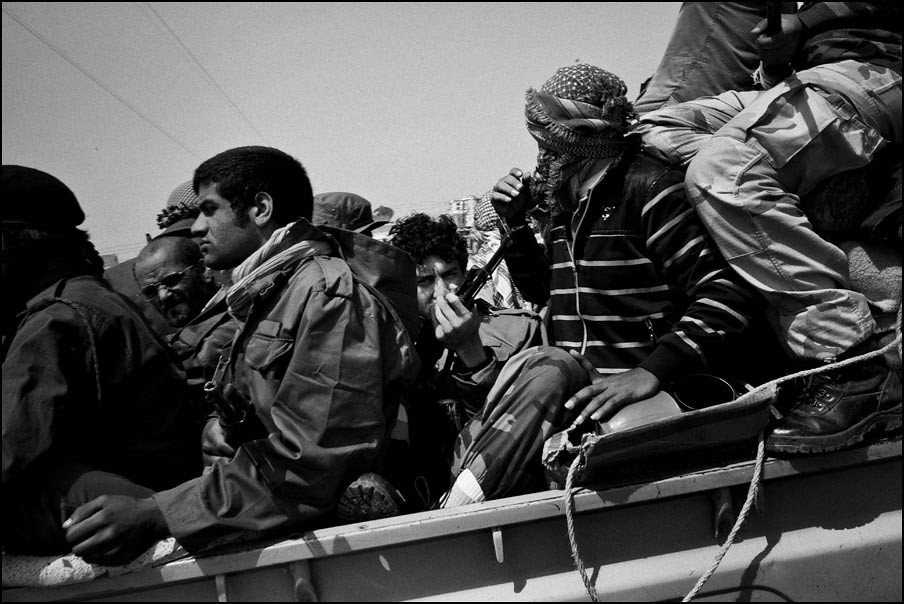 What did you learn about yourself in covering this conflict?

I keep discovering new things about myself, not only from my
trip to Libya, but from all my trips. In Libya, I appreciated some
aspects of life that were not considered important and were
taken for granted. The value of human life is always downgraded
in conflicts. However, seeing the Libyans still keeping their faith
to their cause of fighting the regime, unveiled the inner strength
of the human being of surviving and resisting.

Things in life could change unexpectedly and the loss of freedom,
existence, safety, leisure, love can sometimes make you stronger
which also helps achieve your purpose. Somethings last, but not the
least is that death always gets more intimate. It reminds you to live a
life with a better understanding of things around you. 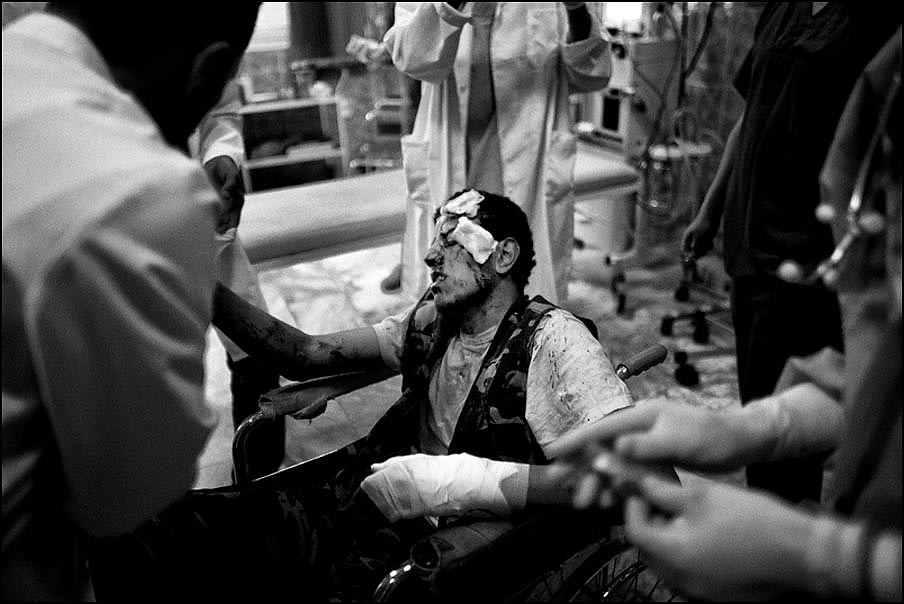 In conclusion, what advice do you have for photographers who
want to cover conflicts.

In my opinion, the first and most important is to understand the
reason why they want to cover such a story, and what they want
to express. After clearing that in their minds, they must
calm their enthusiasm that could lead them in making wrong
decisions.

Always put your safety first. It is not necessary to go in the front
line to do great images. The image is everywhere and you must
discover it. 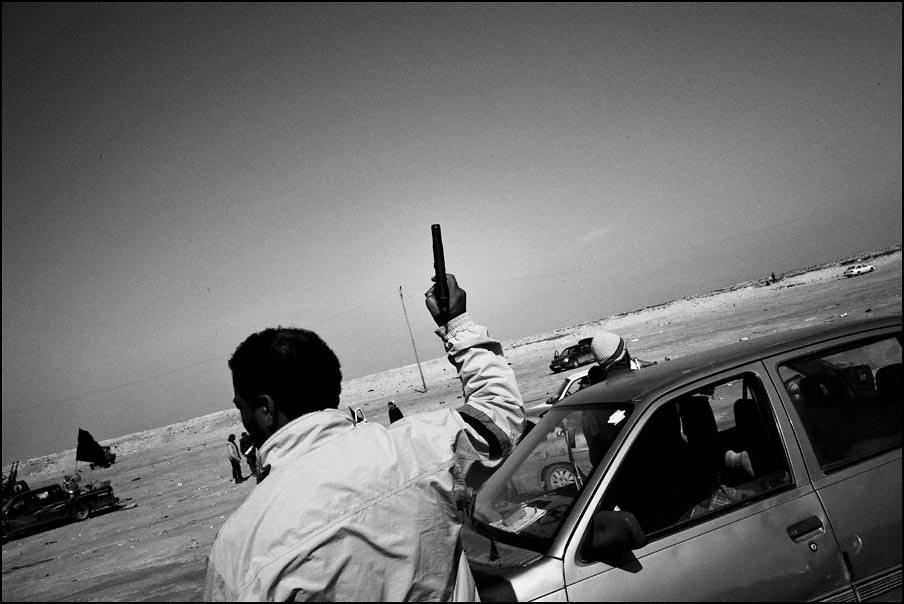 Angelos Tzortzinis was born in Athens, Greece, in 1984. He studied at Leica Academy of creative photography. He is a freelance professional photographer associated with the French Press Agency (AFP) in Greece since 2007. Simultaneously, with the completion of his studies, he was selected by the competition ¨Young Greek photographers 2007¨. He has also been awarded with POYi 67 General News, PDN photo annual 2010, Honorable Mentions in Px3 and IPA International awards 2010, Chipp awards 3rd prize General News 2011. He works for Greek and international magazines, having carried out assignments for Time magazine, Newsweek, International Herald Tribune ,The New York Times. He lives and works in Athens.

Next week on TID, we'll take a look behind this beautiful image by Chip Litherland: 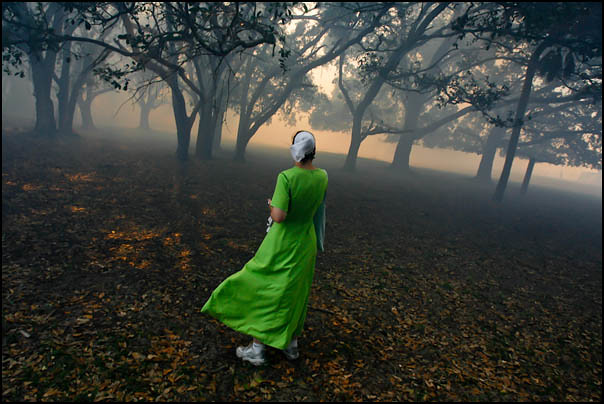