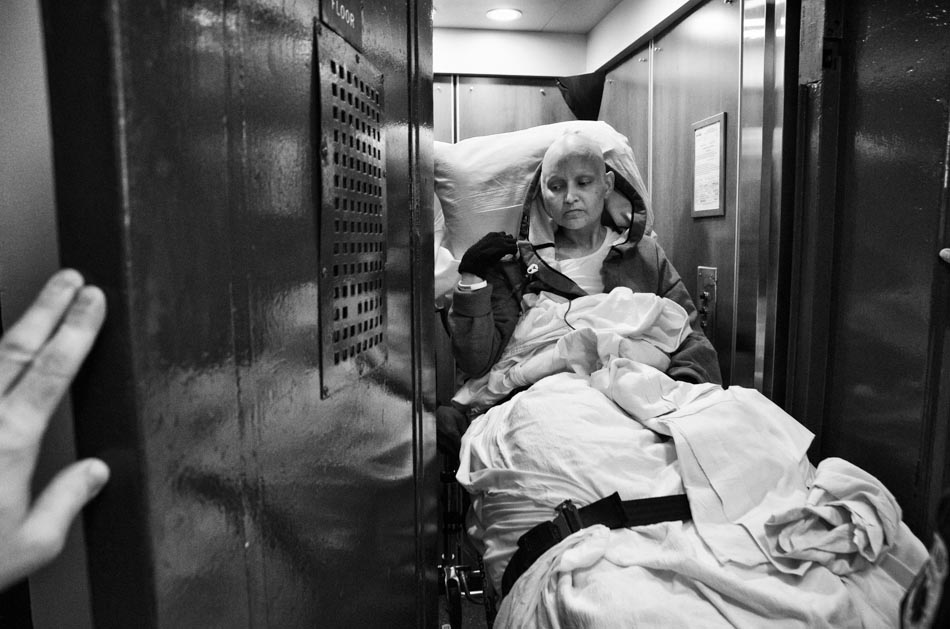 (EDITOR'S NOTE - this is part 2 of a 3-part interview with Angelo who documented his wife's cancer diagnosis)
TID:
You mentioned previously that you believed there was an importance of sharing stories that are not always easy to face. As your wife's illness got worse, I wanted to ask you some thoughts about this. Lets begin with the question of - how did the two of you begin to face this?
ANGELO:
I made this photograph after we rode home from the hospital in an ambulance. We crossed through Central Park and the driver turned on the siren for us. Funny that we found laughter in this...I guess we had to. A few years earlier we were married in Central Park and now we were cutting across the park so Jen could go home to pass. The day before this we were told that Jen's liver was failing. We lived on the second floor and the carrying Jen up the stairs wasn't going to happen. The elevator was pretty small and I remember looking at Jen and seeing the straps around her body that kept her secured on the gurney. It was December and she had my gloves on.
This was so surreal. Neighbors walked past us with a frightened and confused look on their face. Jen's skin had a yellow cast because her liver was failing. There was an ambulance out front.  Jen was there, dying, and there was nothing I could do. And all the while Jen had this calm about her, maybe an acceptance and understanding that she had lived her life to the fullest.
When Jen was diagnosed in 2008 we really had no clue how crazy our life would become. I remember looking into Jen's eyes and seeing how scared she was. Now I wonder if she saw the same fear in my eyes. Maybe we were naive but we believed we would be ok because we had each other...no matter what happened, we were going to figure things out. We both believed it was important to stay positive and we let it be known with family and friends that we couldn't tolerate any negativity.
We tried to simplify our life as much as possible...which is exactly the opposite of what life was throwing at us, but we had to let go of everything that wasn't necessary. 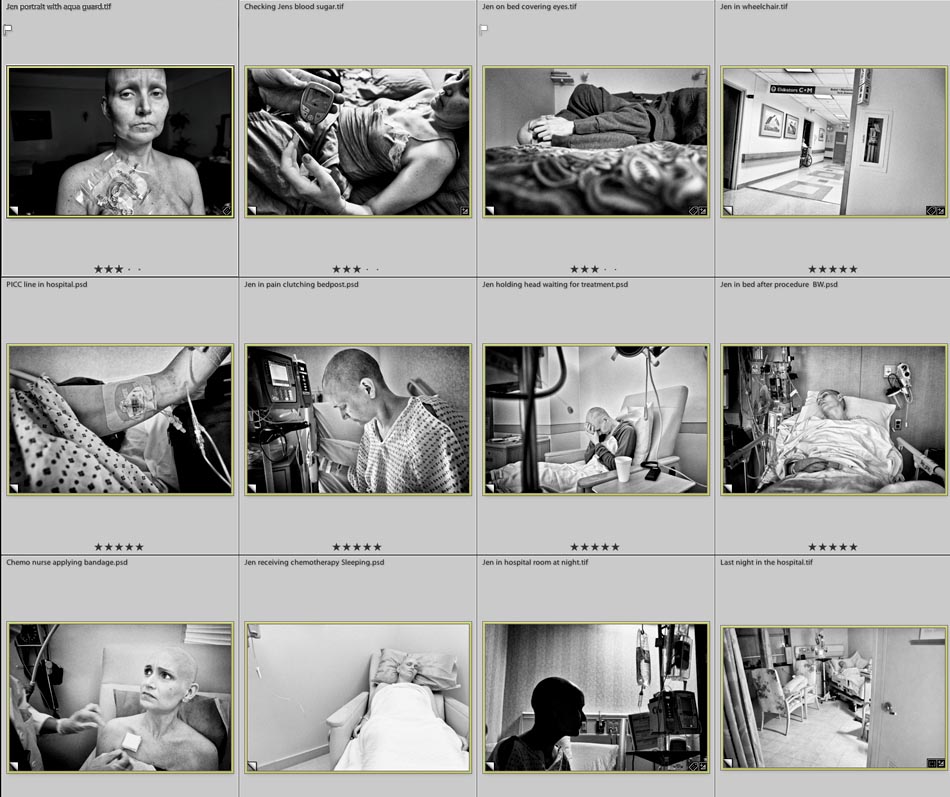 TID:
It's difficult to watch your wife change so visually in the pictures, and I can only imagine how hard it must have been for you.  Can you talk about how you felt watching her change, and how that impacted how you photographed her?
ANGELO:
I saw these changes as they were happening but now these changes are more apparent than at the time they were happening. It was more gradual then. That said, it was brutal. I couldn't stop the cancer and the times when I was helpless were the worst. When Jen's nausea or pain were really kicking in all I could do was be there with Jen. I'm thankful that even that helped but I couldn't stand not being able to make Jen feel better.  Like I mentioned earlier, I was just going off of my gut. I really didn't think too much about the changes. It was really more about communicating something that I didn't understand. 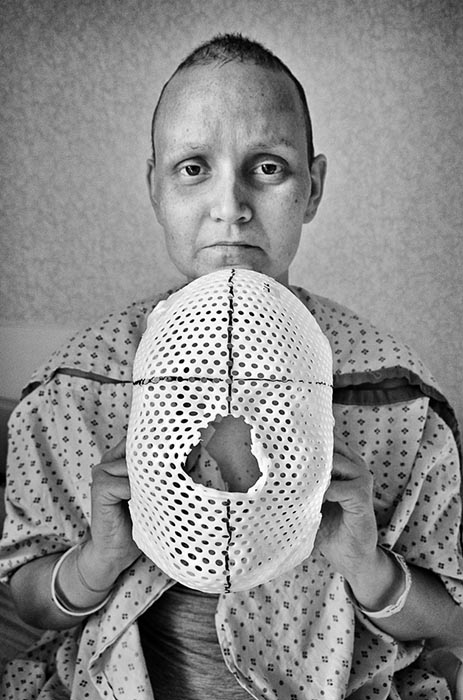 In October of 2011 a scan revealed that Jen's cancer had spread to the lining of her brain. Jen started brain radiation treatment. This was the mask Jen wore. The sides were secured to a board so her body would always be in the exact same position. Jen told me about the room and the equipment... it was horrifying. But Jen still had a sense of calm, appreciation and love.
The chemotherapy was taking a toll and before Jen's radiation treatment was completed she was hospitalized. After Jen's final treatment she asked if she could keep the mask. It was strange but we both wanted it. I still have it in my closet. The light in Jen's hospital room was really nice and I thought the combination of this mask plus Jen's eyes, her eyes were always so intense, told a story of determination and optimism.
TID:
How would you describe this phase of your life with her at this point, overall? Could you paint a picture of what it was like for the two of you?
ANGELO:
Our life had turned into a maze filled with Dr. appointments, medical procedures, medications, and side-effects. For the first year after Jen's cancer metastasized Jen was was still working and getting around on the subway, cooking, etc. At the end of April, 2011, Jen was hospitalized for 15 days and after this point our day to day became even more hectic. Jen was using a walker because her legs were getting weaker. The pain was getting more intense. Nausea was regular...and I'm not talking about car sick nausea.
I'm talking about sitting in the bathroom for an hour and not wanting me to touch her, to talk, to do anything...The slightest touch or sound would make the nausea worse. We were scared out of our mind. The cancer was spreading. We tried to stay positive and we always made each other laugh and smile.
But things just kept getting more difficult. Jen would wake up in the morning and I would check her blood sugar. It was usually low so I would try to get her to eat something. Jen's appetite was affected by many things, including nausea from different medications, so most food didn't sound appetizing. Plus, as the cancer spread to Jen's brain she wasn't always completely cognizant. I couldn't always reason with Jen...some times she was just out of it. These times were brutal. We spent a lot of time in the hospital, weeks at a time. We'd go home and 2-3 weeks later we'd be back. Sleeping was difficult and I've never been so tired.
Stress takes a toll on people. It was non-stop, 150mph, all the time. 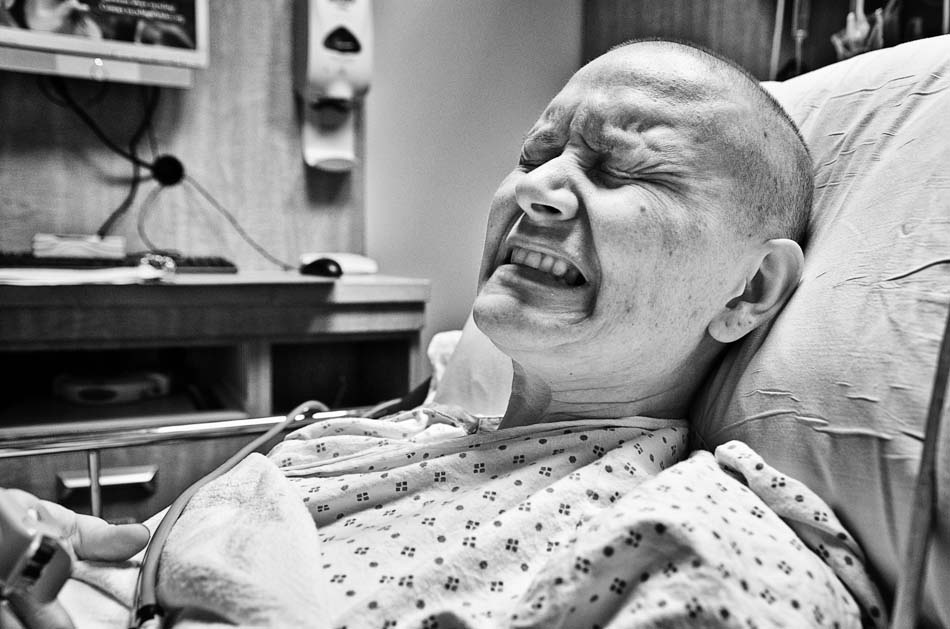 TID:
I know this is a difficult question to ask, but I am curious - was there a point when you both knew things were not going to get better. If so, can you describe that moment and what impact that had on the two of you.
ANGELO:
In October of 2011 Jen and I were sitting in her hospital room. Jen gave me a strange look and when I asked what she was thinking Jen said, "I just saw the outline of a shark over your head." I felt like someone just kicked me in the gut. I knew this was bad. We told the doctor and she ordered a brain scan. The results showed that the cancer had spread to the lining of Jen's brain. This is when I started thinking there was a good chance I'd be a widower before I was 40. We still kept our hope, maybe for a miracle - we had to. This was Jen's life, we couldn't give up?
TID:
How did your documentation of her play into this shift?
ANGELO:
Maybe I became more focused at this point because I had to take even more care of Jennifer. I knew every minute was precious and that Jen wouldn't be around much longer. I think I became even more hyper sensitive to everything about Jen. I was so focused on every sound Jen made, every move. I wanted to be a step ahead of her. If her skin was irritated from brain radiation I wanted to be there with moisturizer before she asked. If Jen had a crazing for something to eat I wanted to have it ready instantly. Whatever Jen wanted and needed was all I was concerned with. I've never felt so focused in my life.
Jen's cancer had spread to her liver and bone, her hip was hardest hit, and she was in tremendous pain. The doctors were working to find a combination of pain medications to provide some relief but it was never fast enough. I felt helpless. Jen was in pain and there was nothing I could do to make her feel better. Jen's skin hurt...rubbing her head or arms was out of the question. Jen was also nauseated...talking or trying to sooth her wasn't going to help. All I could do was be there. I'm thankful for at least this but I still struggled to accept that I couldn't take the pain away. When I showed this photograph to family and friends it really hit hard. When I look at this photograph I remember the exact feeling of that room, every sound and smell.

TID NOTE:
Next week, in our final installment, we'll ask Angelo about the last days of his documentation, and more about his decision to move forward with telling Jen's story.