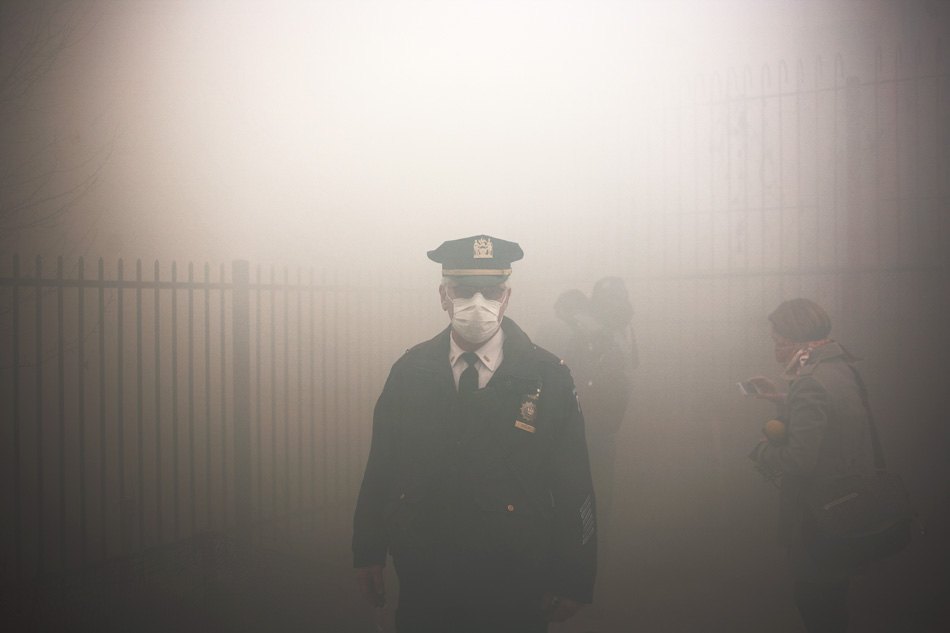 This is an image I made during the East Harlem building explosion on March 12th, 2014. I was able to gain access to a courtyard behind the destoyed building and shoot photos of firefighters working to contain the blaze until a police officer politely asked me and other media personnel to leave. I was shooting for The Wall Street Journal, and how I ended up shooting for them is a story in itself.

I had scheduled my first ever freelance meeting with The WSJ that day (in fact, this was my first meeting with any publication since moving to New York). I was pretty nervous. Ok, I was really nervous. I had just ended a temping job as a photo retoucher for an e-commerce company. Not what I wanted to be doing, but at least it had been paying the bills. I showed up to the News Corp Building (The Journal's headquarters) in midtown Manhattan. I was set to meet with Tracy Armstead, the photo editor of the Greater New York section. I had two personal photo stories I planned to show her to give her a better idea of my work. I also packed my camera in my bag, not because I thought they were going to give me an assignment, but just to show that I take it with me everywhere. And the camera I brought was nothing special. In fact, it's the only camera I own right now: an original Canon 5D with a 35mm lens.

So we sat down at Tracy's desk and right away she mentioned what was happening on the TVs. There was breaking news; a building had just exploded in East Harlem. Completely leveled. Other editors were paying attention to the monitors. I hadn't even pulled my laptop out yet and I thought "well, this meeting might not be happening" because the news team needed to get in gear. I've shot spot news situations before, including life and death events, so I knew The Journal's staff was in for a crazy day.

I looked at the monitor, then at Tracy's face. I reached into my bag and pulled out my camera. "I can shoot this if you need me to," I blurted out, not thinking. Surely they already had somebody on it. Or were waiting for the lightning-quick wire photos. Tracy paused, then said "Ok. Get in a cab." I literally ran out of the newsroom. I was quickly called back by another editor, Joe. He told me to get reaction photos of the neighborhood's residents. Leave the heavy lifting to the wires. I got out of the building and quickly hailed a cab. I told the driver where to go, which was pretty far from The Journal's building. On the way, firetrucks were passing us. While in the cab, I mentally prepared for what I was about to see. I told myself to not freak out: to slow down and remember what Joe said. I had shot fires before when I lived in the midwest, but this was New York. It was going to be chaotic. 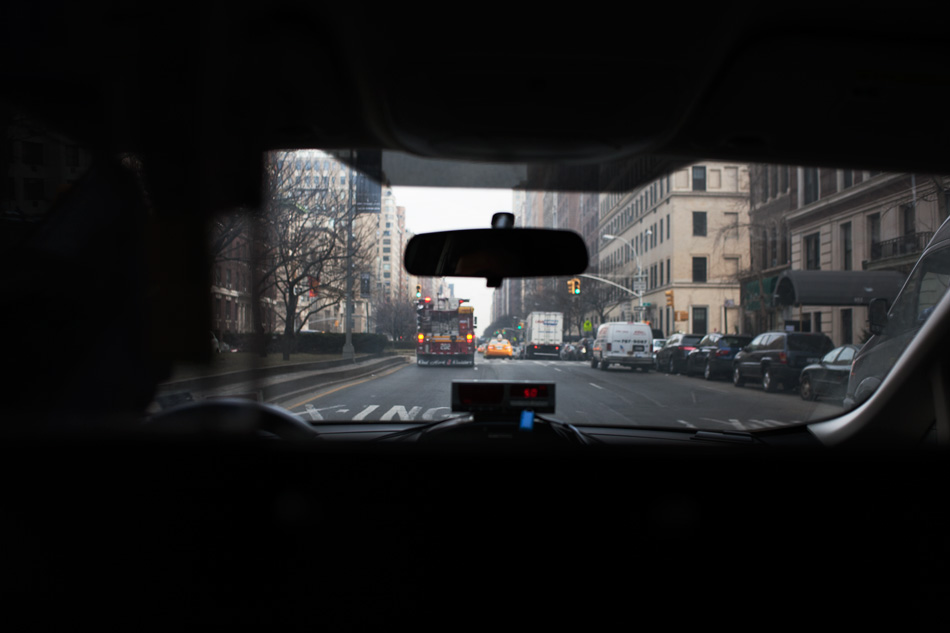 My cab crested over a hill and I saw the smoke plume. "I need you to get me as close as you can to THAT," I told the driver and held up the camera. He understood.

I got out of the cab around 112th St and sprinted the rest of the way to 116th and Park Ave where the explosion happened. I realized that my camera gear didn't really make me stand out from everyone else, so I was afraid the police were going to stonewall me whenever I tried to get to a media area. So many people walk around with DSLRs around their necks in New York, they've become an accessory.

I used what I was taught in school: look like you belong and nobody will question you. It also helped that I had on nice clothes since I thought I was having a meeting. 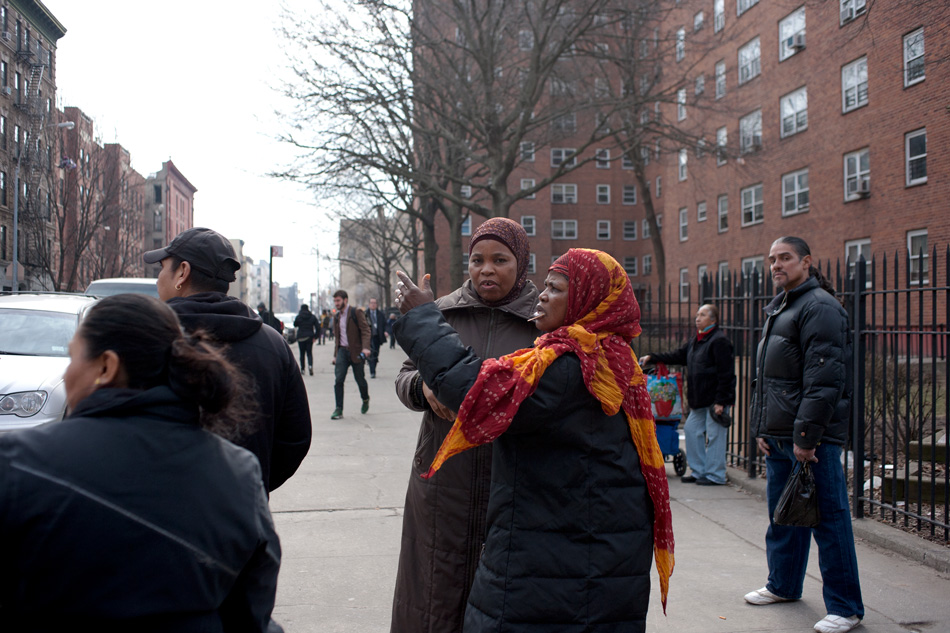 From there, I spent the next 5 hours shooting. I would get texts and e-mails from Journal staff, who would tell me to go to a certain location so they could cover a different part of the story. I went up to the 125th Street Metro North station because the elevated tracks were right next to the explosion, so train service were suspended. I went to a location where children were to be picked up after they were evacuated from a school close to the explosion site. I tried to get into Mayor de Blasio's press conference but was turned away by police because I didn't have press credentials. I mostly shot with my phone so the editors could tweet out the photos and make quick galleries. 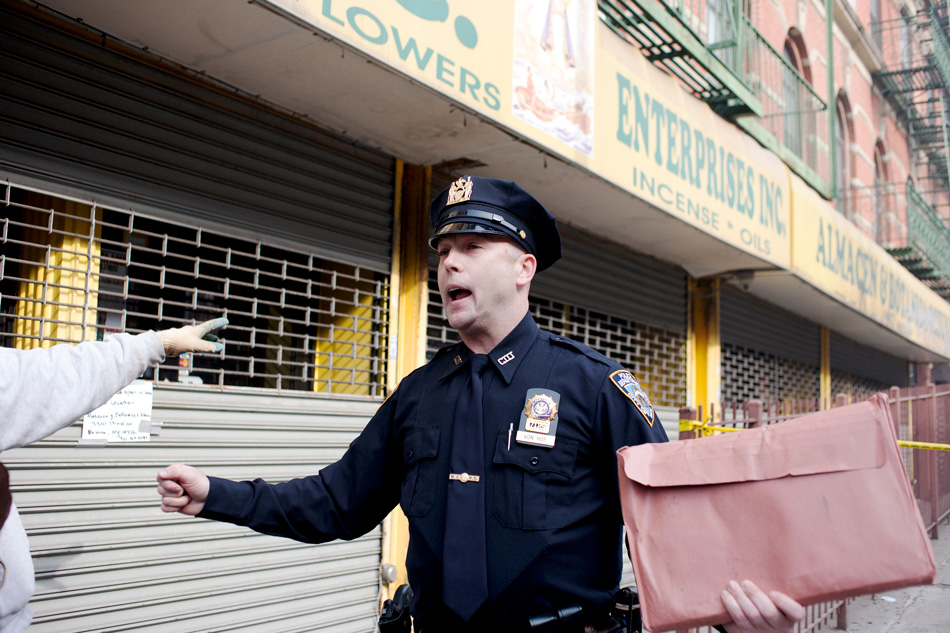 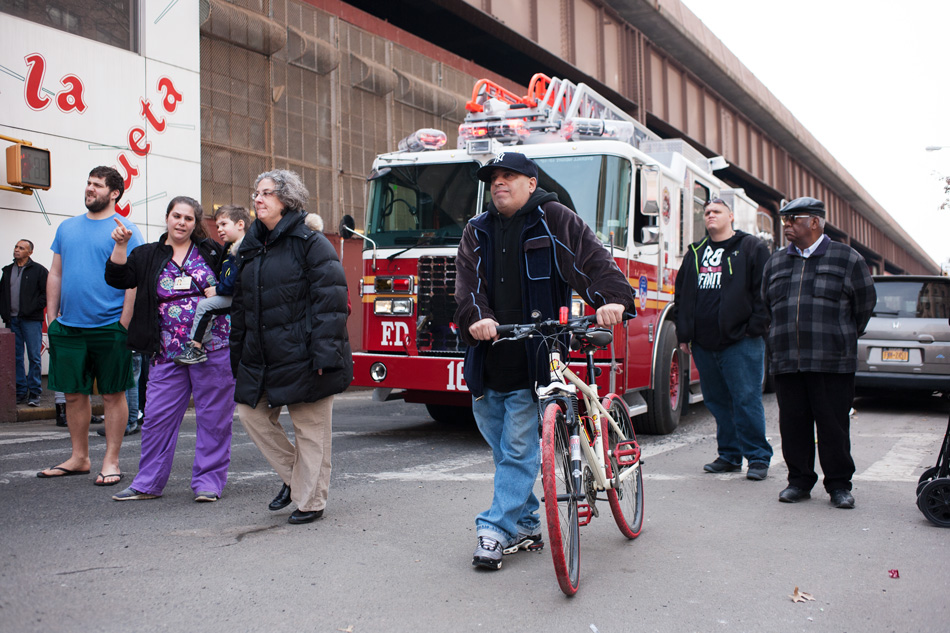 I tried my best to get as close to the building as possible, but it just wasn't cutting it. I had already gotten a lot of reaction photos and wanted to try my luck at getting a photo of the destruction. On the same square block as the explosion, I noticed people going through a gate that led to a courtyard. I decided the worst that could happen was I get thrown out by police, so I headed inside. 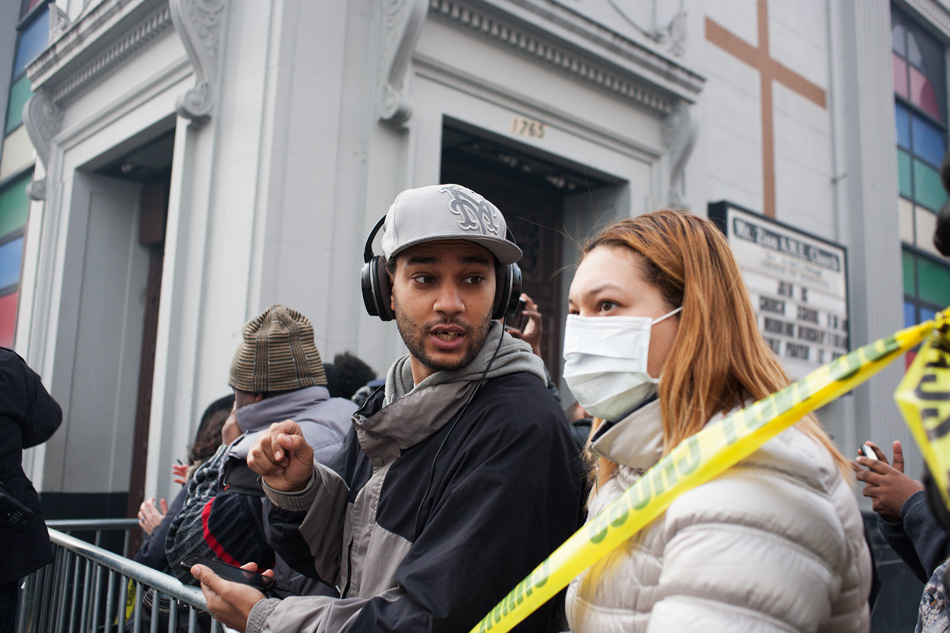 Visibility inside the courtyard was minimal, and I didn't realize it at first, but the courtyard actually butted up against the back of the exploded building. However, there was so much smoke and dust that I just couldn't tell at first. I started shooting photos of people looking over toward the building. It was tough to breathe, so I took my jacket and wrapped it around my mouth. I'm not sure what good it did, but it was something.

Luckily, I was wearing my boots, because I realized that the crunchy sounding stuff I was stepping on was shattered glass. I looked up and saw that most of the windows from adjacent buildings were blown out. While inside the courtyard, I barely took my eye from the viewfinder. 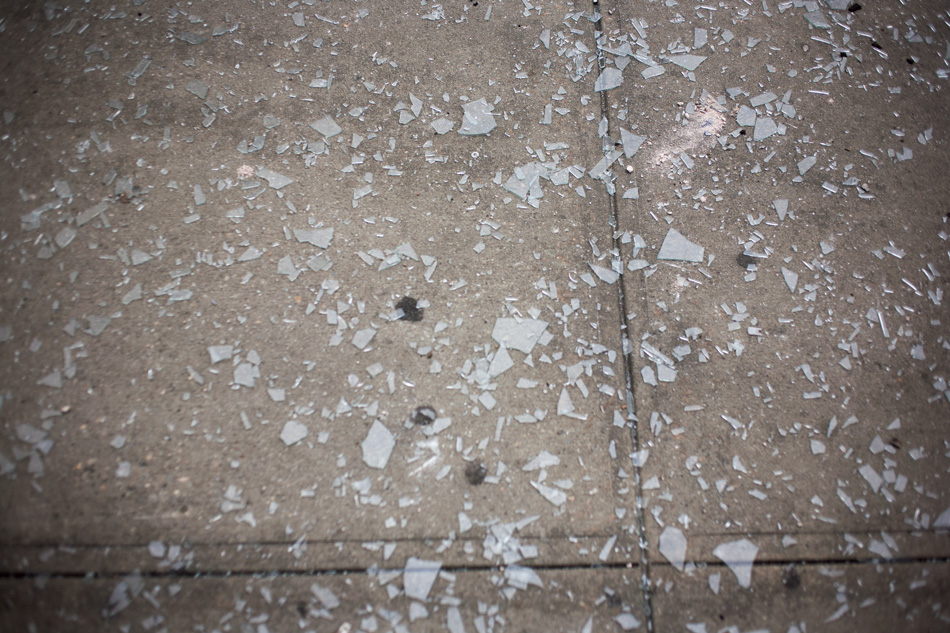 There were a few other media personnel in there with me, but there were also people who worked or lived in the surrounding buildings, so I made photos of them. At one point, I wasn't sure what I was looking at until the smoke cleared, revealing firefighters only a few steps from me. I realized how close I was finally and knew that police would probably ask us to leave soon, so I kept on shooting.

Sure enough, an NYPD officer with a mask on came over and asked everyone to leave, because yeah, it really wasn't safe. 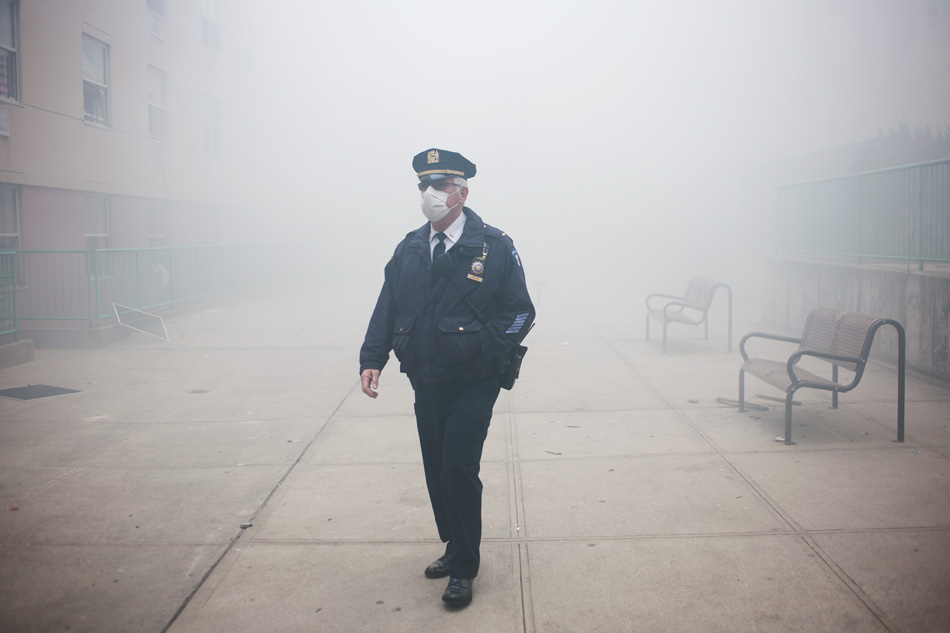 I realized that he was now my best subject, so I focused on him and started to back up slowly. I've dealt with the police plenty of times while shooting, and I am always polite and listen. If they ask you to move, you move. It generally works out to my advantage anyway because they see that I am professional about it and am just trying to do my job. There was no need to get arrested today, especially since I JUST started shooting for The Journal. 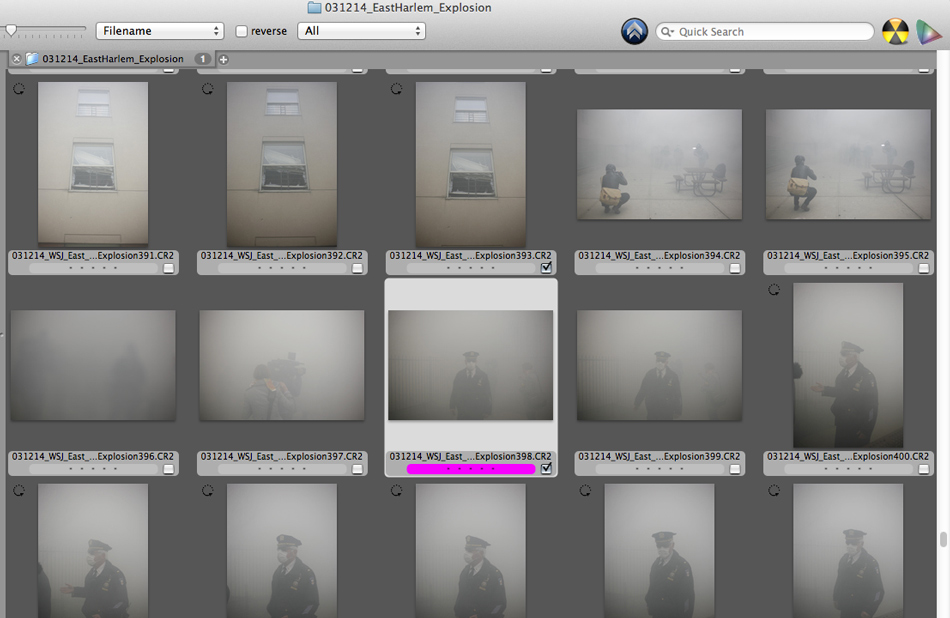 I kept my camera on the officer and started to move slowly. I shuffled over the broken glass and made sure I didn't trip over any debris. I kept shooting until I reached the end of the courtyard, gave the cop a head nod, and left. After the courtyard was cleared, the police put an officer in front of the gate to prevent anyone else from entering. 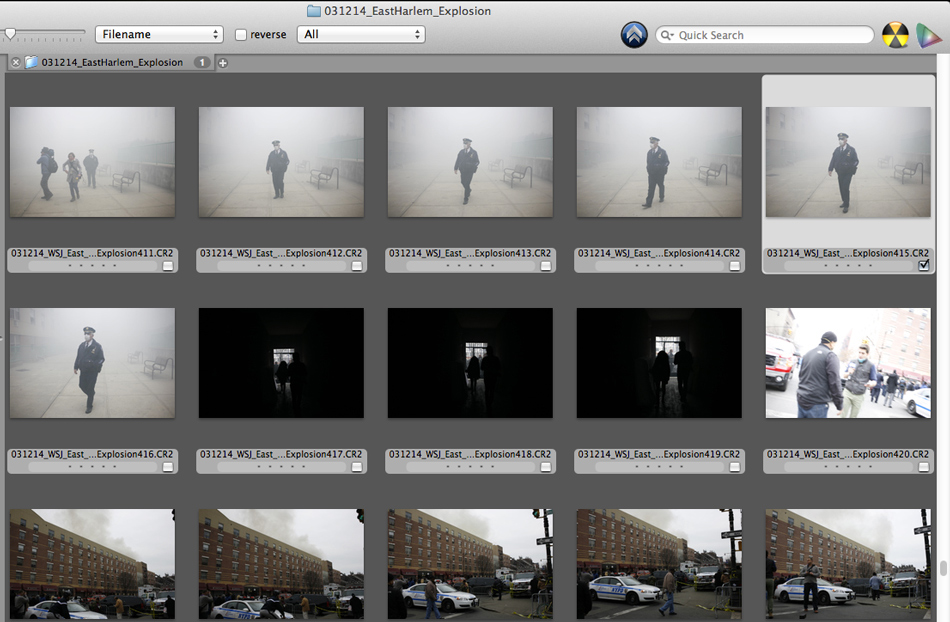 There really is no map for dealing with spot news situations. I knew the first problem I was going to encounter was the police presence. The next problem was my camera. I love shooting full-frame with a 35mm lens, but I could have used a quicker camera body and longer lens in this situation, but at least I had it on me. The third problem I encountered was myself. I hadn't been a traditional photojournalist in more than a year. I was afraid of making mistakes and pissing people off, but that didn't happen for the most part. In these spot news situations, I think having a clear head and street smarts helps you out way more than the ability to make photos. You can use that to your advantage and the photos will just come naturally. They may not be the right composition you want because there's a massive firetruck in the way, but such is spot news. 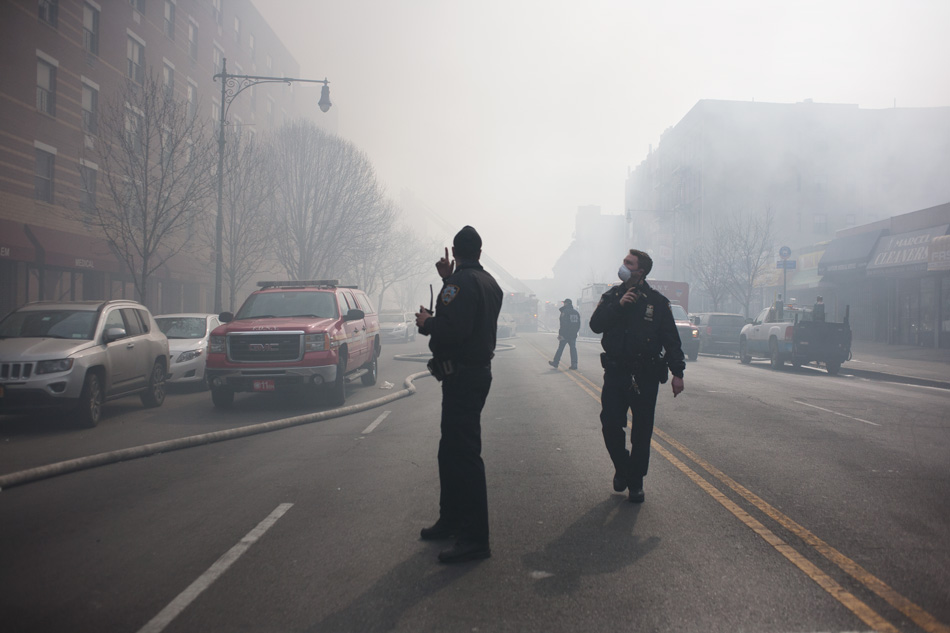 I learned that having your camera on you at all times can get you assignments on the spot. Yes, I was also in the right place at the right time, but look what would have happened if I didn't have my camera? My meeting would have been canceled and who knows if it would ever be rescheduled. I was never successful when it came to photojournalism is school. I only had one internship, and it wasn't even a photo internship. I never won any awards or been accepted into workshops. I've freelanced here and there for midwestern papers, but I never thought I'd have photos in The Journal. 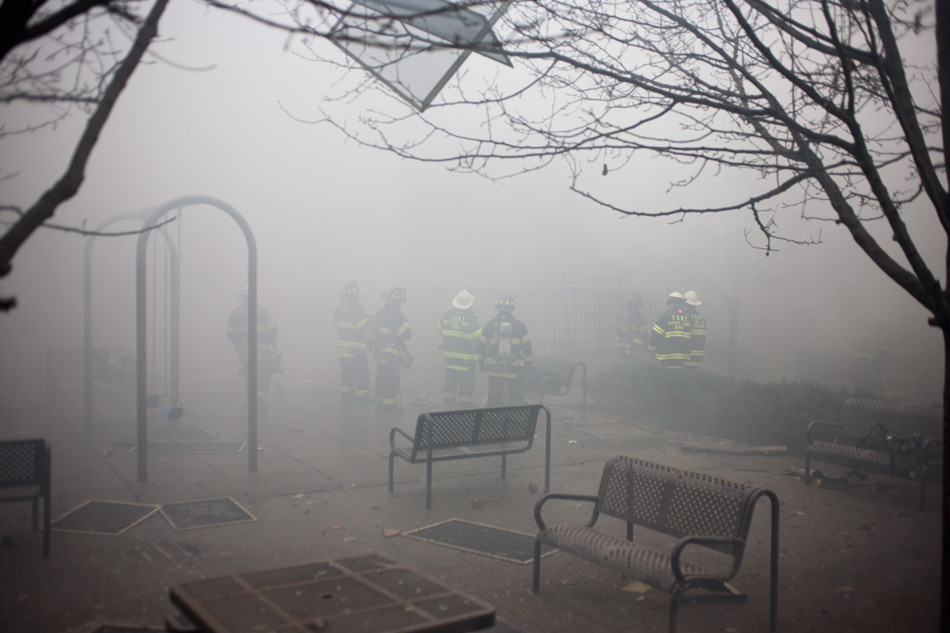 When I got back to the newsroom, Tracy met me we looked over some photos. She thanked me immensely for shooting for them. I talked with Joe, who reiterated his statement to me earlier about reaction photos. I met a few more editors. One of them was like "Are you the guy we hired on the spot?!" 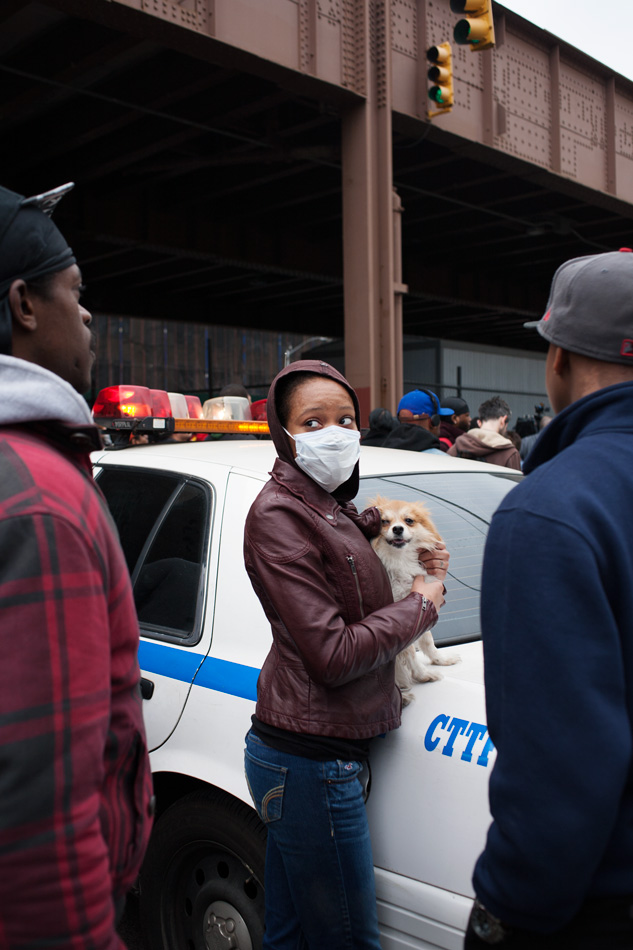 I was sent out again for second day coverage of the explosion, and have had a few more feature assignments for them as well. I realized that this is exactly what I want to be doing with my life. The transition to freelance has been terrifying, though. The days when nobody calls me or returns my e-mails used to be bad, but now I've learned how to budget my time. This summer turned into a steady steam of work from The WSJ, and I even had my first magazine assignment on location in Philadelphia. I think after this experience, editors were able to trust me very quickly.

They sent me to cover a range of events, like music festivals or profiling celebrities. Not all assignments have been crazy, in-your-face moments, but it is very important to remember that shooting the small stuff with the same enthusiasm gets you the big stuff. I try and do a little each day to improve my photographic career, whether it be shooting photos for work, continuing a story or sending out e-mails with my portfolio. Every time I get an assignment, I try to overachieve as best I can. I really want to show editors that I'm worth it to send out for a story.

The best advice I can give is to shoot all the time. Work on a story you want to work on and don't worry about if it's going run in a paper or magazine. Editors want to see photographers who are constantly shooting. Why would somebody hire you if you dodn't have an updated portfolio? Shoot and edit the way you want to so editors can see your vision. That's what it comes down to. It took me so long to grasp this, but now that I finally have, anything is possible. 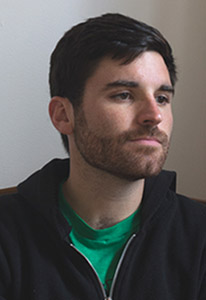 Andrew Lamberson is a freelance photographer based in Brooklyn, New York. He is available for assignments all over the city and if you want to send him somewhere, well, that's ok too. Andrew graduated from the University of Nebraska-Lincoln's College of Journalism and Mass Communications. Besides making photos, Andrew loves to ride bikes and cook with his fiancé Heather.