Andrew, thanks for your time. What a striking image.
Please tell us a little about it. 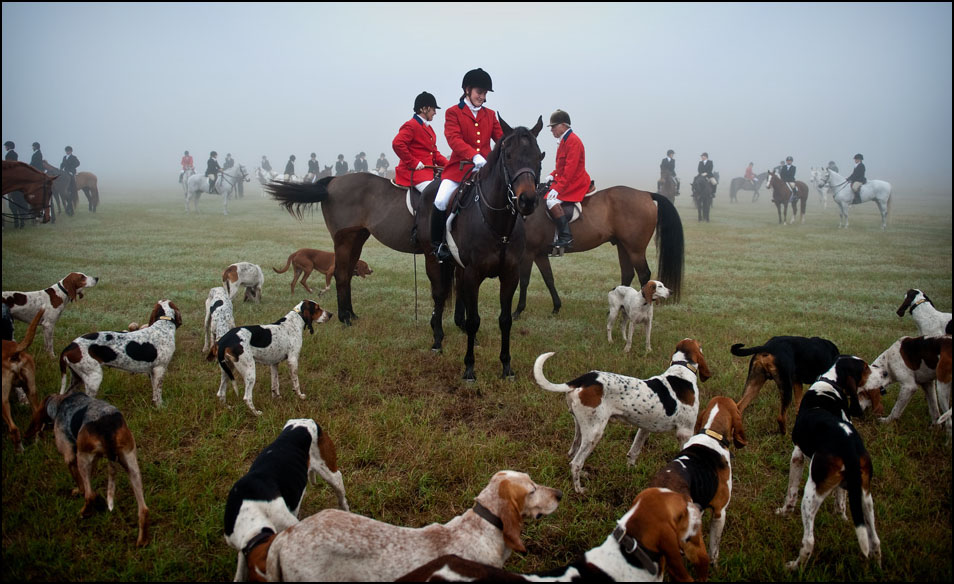 Thanks for having me. It is an honor to be featured here.
This photo is from the Moore County Hounds Fox Hunt
in Southern Pines, N.C. They hold the event every year on
Thanksgiving Day morning.

It starts with a parade of hounds down the street, followed
by the blessing of the hounds in a field, and lastly, the hunt.
They no longer hunt live foxes during the hunt. Instead, a
lead horse pulls a fox-scented drag.

What was the origin of the assignment?

The newspaper covers the yearly event every other year or
so. That year they wanted it for the cover story of the Sunday
Life section, which gets good play - usually about 7 or 8
photos. I've always wanted to cover it, but I was usually off
on Thanksgiving.

That year I requested the assignment.

Now onto the image itself. Tell us what led up to the
image, and what was going on in the moment.

As I was driving out that morning there was a beautiful
amount of fog on the ground. I prayed to the photo gods
that the fog would stick around for the shoot. Luckily, when
I rolled up to the field it was still there. The fog really helped
make the photograph - if it had been bright and sunny, I
don't think it would have worked as well. It gave the photograph
a timeless feel.

Since we have covered this event many times in the past,
I was able to go through the archives at work and see what
other photographers had gotten from the event. I did this to
make sure I photographed something the readers hadn't seen
before. The standard photo from the event is usually a shot
of the riders and hounds parading down the street adjacent
to the field where the hunt is held.

I intended to shoot this too, to see of I could make a better
image of it, but I actually missed it since I was busy shooting
a few of the riders who arrived early and were already in the field. 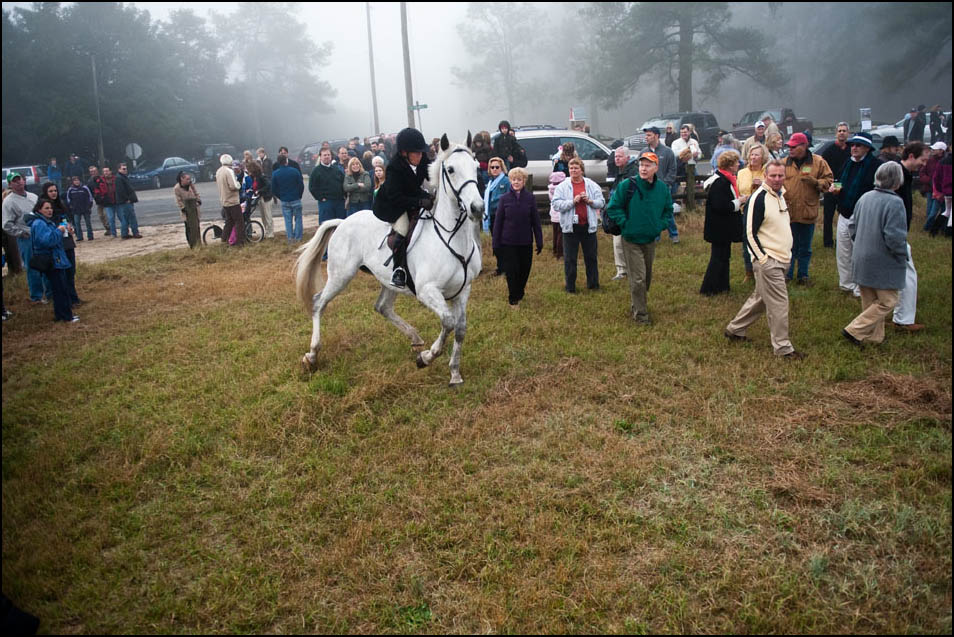 When I realized I missed the parade of hounds, I raced down to
where they were entering the field and tried to get shots of the
stragglers. Just as I got there, I decided to do a Hail Mary of the
riders entering the field.

(Editors note: a Hail Mary is when a photographer holds the camera
above his/her head and makes a hopeful guess at composition.)

I did this on my very first shot, and it scared the shit out of one
the horses. The horse ran towards a crowd of spectators and away
from me. The rider almost fell off the horse and had to fight to
regain control. Once he did, I had a number of spectators yelling
at me, which is always fun. This really put me off my game, and
I was worried about scaring the horses.

After that I nixed doing any high angles. 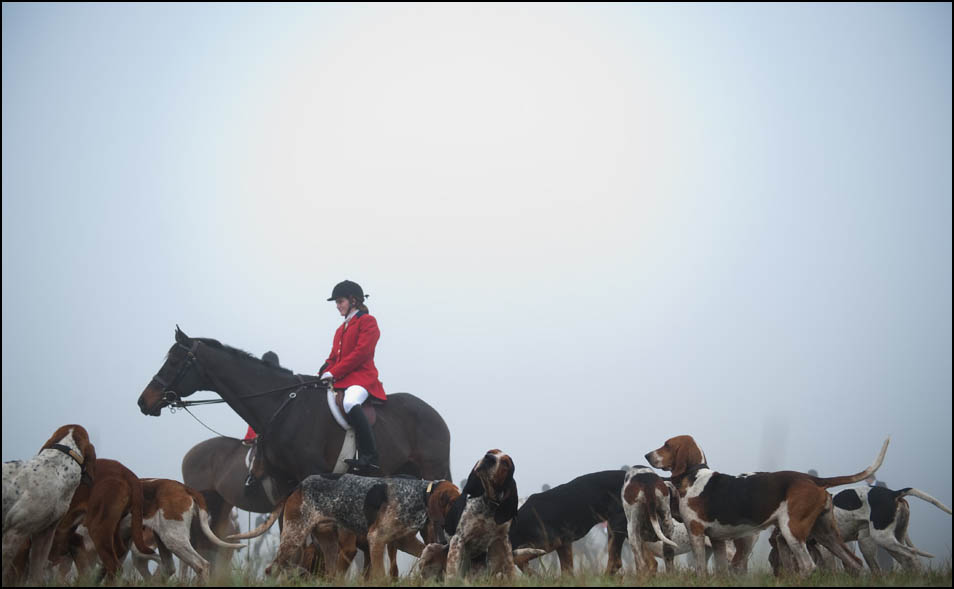 One of the biggest challenges was the spectators. Once all the
riders and the hounds are on the field, the spectators are supposed
to stay behind a roped off area, and only the photographers covering
the event for publication were allowed to be out with the riders. This
didn't last long. Soon enough, the rope came down and every spectator
that had a camera roamed around the field, trying to get a shot -
they kept getting in the way.

You wouldn't know this by looking at my take.

I made a conscious effort to not get any of the spectators in my shot.
I felt that it would diminish the strength of my photographs if you
could see some random person with a camera in the frame with the
riders and hounds. Most of the time I would either photograph a scene
that didn't have spectators, or I would use a horse to block the view
of the them.

Soon after, the hounds start gathering around the lead huntsman
for the Blessing of the Hounds, before the hunt begins. At first, I
really tried to get a low angle with dogs in the foreground and the
riders in the back. But it just wasn't working, the hounds never fell
into place properly. Also, when I knelt on the ground the hounds
would just come up to me. I wasn't able to get much of anything.

The other problem with the low angle was that I lost the feeling
of the fog - it ended up looking like an overcast day, and at
that angle the sun was right behind them, so that bluish fog
would turn a very unappealing pure white. 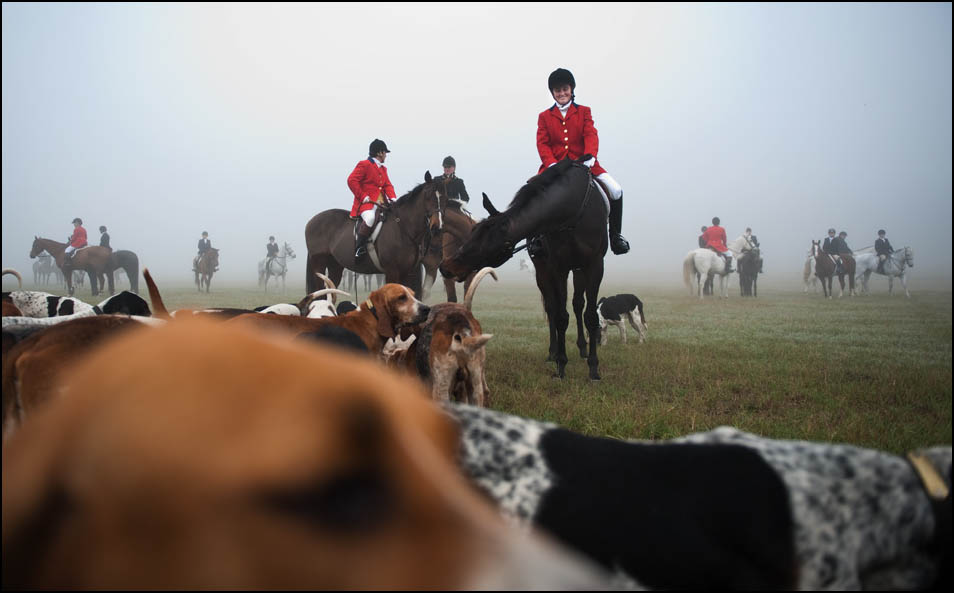 As I knelt to pet one of the dogs, I notice two more riders
come up behind the lead rider at a interesting angle. I stood
up and started shooting from eye level. The scene was perfect,
but I was at the mercy of the hounds falling into place. Also,
the riders in the background were obscured by the lead horse.
I was afraid that it just wasn't going to come together, because
the riders really don't stay in one place for very long, and the
hounds are a random element. It was mostly luck that the dogs
fell into a semi-circle around the riders.

Was there any points of conflict or struggle during the
making of this picture, and if so, how did you handle it?

The biggest struggle was with the spectators breaking across
the line. I really didn't want them in any of my frames. I think
subconsciously I didn't want them in the shots because I got
yelled at by a few them a bit earlier when I scared one of the
horses. I say subconsciously because when I looked through
my take I noticed I had shots of the spectators right up until
I got yelled at, after that I don't have one in the frame.

To not get any of the spectators in the shots took a lot of
patience. I think one of the best assets a photographer can
have is patience, which truthfully I don't usually have. If you
wait and watch for a moment to come together it usually
will and you will have a much better photograph because
of it. Also when you are patient you have a tendency to
really see the scene and make the best possible photo from
it. I think the spectators yelling at me earlier put me in a
slower, more thoughtful mindset, which helped create this picture. 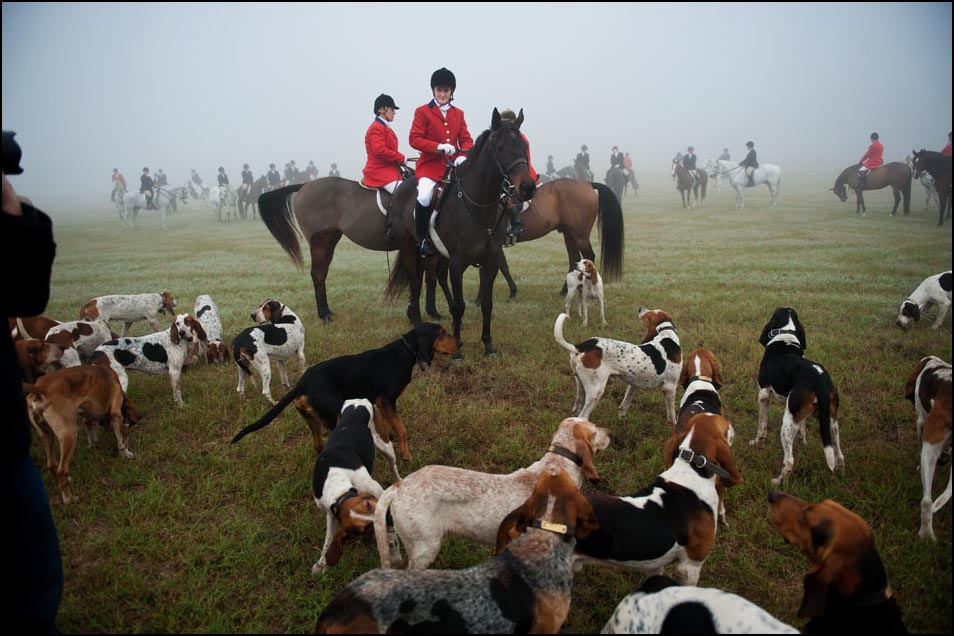 It was such a fleeting moment in time, did you know when
you made the frame what kind of picture you had?

The scene lasted for about a minute or two. I had an idea
that I made a solid photo but I'm never really sure until I
get it onto the computer screen and look at it. A lot of
times I will look at an image on the back of my camera
and think I nailed an image only to get up on my laptop
and realize it just doesn't work. Looking at it on the camera's
small screen can be quite deceptive. Sometimes you think
you got that lead image and take it easy on the rest of
assignment only to get back and realize that supposed
lead image isn't even worth running as a secondary shot.

At least that is the case for me on occasion. 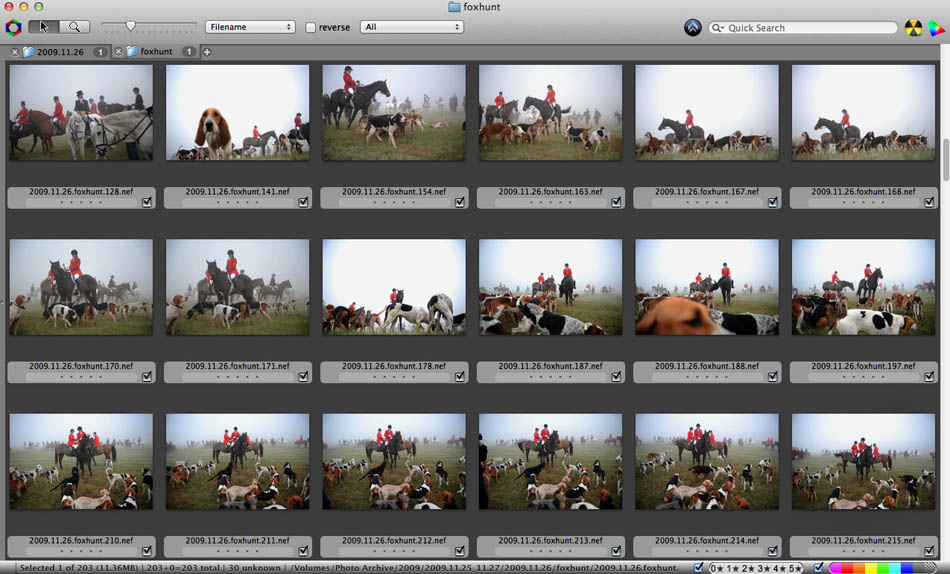 What surprised you most during this assignment?

It is always interesting to hear what another photographer has
to say about an event, and the issues they had with it. For the
most part the fog was an added benefit, until the hunt actually
started. Once it got underway, however, you couldn't see most
of the hunt because of the fog. I realized this was going to be
a problem beforehand, and asked one of the riders where they
would be jumping a fence or any kind of obstacle. So after getting
my Blessing of the Hounds shots, I picked a spot by a fence
where the riders would be jumping. I waited for the hunt to come
my way. 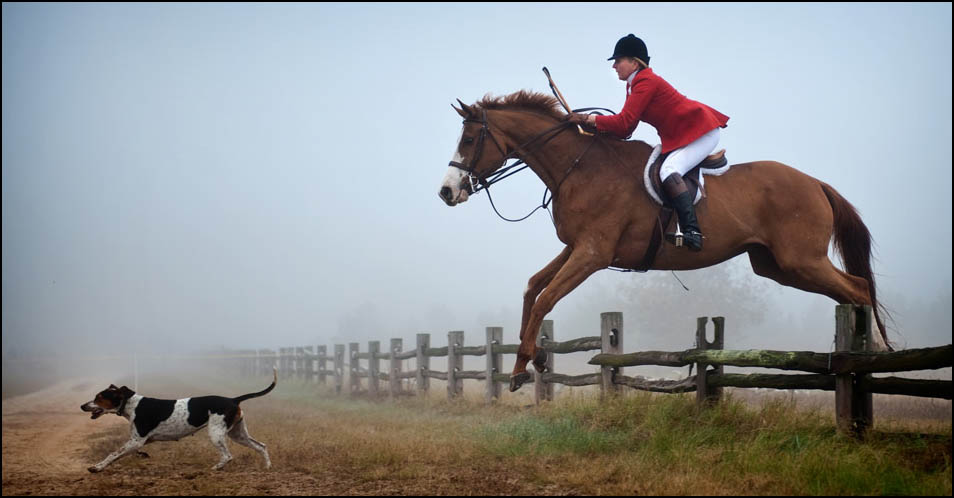 I think most people think of sports in the traditional sense:
basketball, baseball, football, etc.

What advice do you have for photographers to get find access
to such stories, and thus, such images?

I'm not much of a sports photographer, but I do enjoy
shooting these less covered sports. Probably because
they don't feel like your standard sports assignments
and the access is almost always 100 times better than
a standard sports event. Also, it is not a sport that you
cover dozens a times a year like the traditional sports,
so you don't get bored as easily.

To get access to events like this is relatively easy, it is
just up to the photographer to find the events, which
shouldn't be too hard if you know your community. Also,
most of these things are listed on the internet so it is
just a Google search away.

In conclusion, what lessons did you learn from the
making of this image?

Don't do a Hail Mary on an approaching horse.

It also taught me to take things a little slower. A lot of
times when I was at a shoot in the past, I would be
thinking and looking around for the next shot when
I hadn't gotten the picture I needed from the moment
happening in front of me. So, I just take it a lot slower
and try to be patient, but it is always a mental battle to
slow down for me.

Andrew Craft has been staff photographer at the Fayetteville Observer in North Carolina since 2006. His assignments vary from covering the conflicts in Iraq and Afghanistan to your typical building mug. Craft has been named North Carolina Photographer of the Year three years in a row and his work has been recognized by Pictures of the Year International, NPPA's Best of Photojournalism, Atlanta Photojournalism Seminar and the Southern Short Course in News Photography.

You can view his work here:

Next week we'll take a look at this lovely image by Erika Schultz: 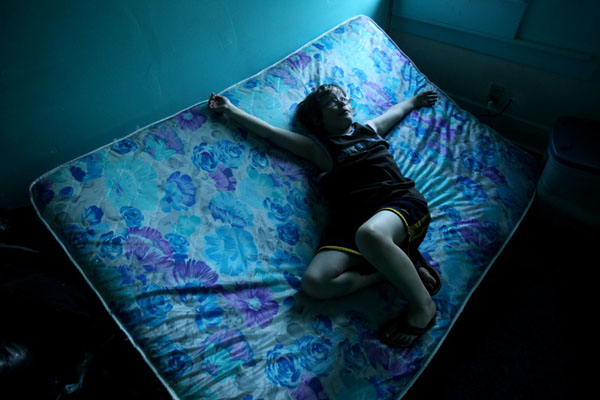