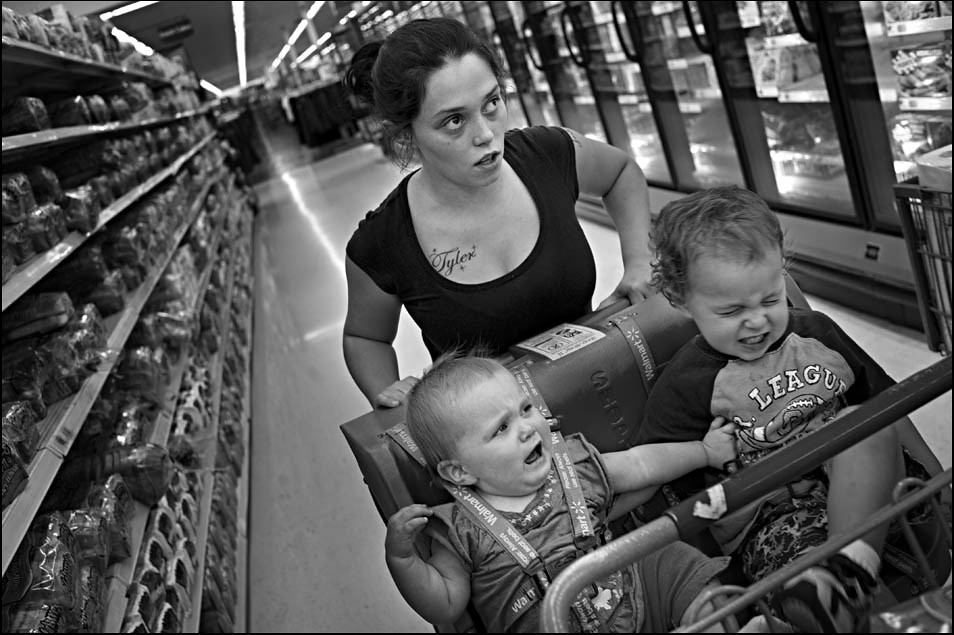 Can you tell us how you got the idea for
the photo series, “While You Were Gone”?

Every few months at the Virginian-Pilot, a different
photographer takes over the photo column “Common
Ground,” and works on a thematically-linked series of
images and text. I was lucky to get a chance to work on
the column during my first year here, and I wanted to find
a part of the community that was underrepresented
in our coverage. I had interned for thirteen months in
Indiana at a very small paper, and I missed the sense of
intimacy and connectivity I had with the community;
I guess I was looking to recreate that experience here, in a
bigger place, at a bigger paper.

The military was a natural community to explore and we
didn't cover military families as much as I thought we should.
So I brainstormed with a friend about how to tell the stories
of military families and the title “While You Were Gone,” just
hit me. I asked myself, “What would it be like to be away from
someone you love for so long?” That seems like a particularly
poignant kind of sacrifice-- not a dramatic, frantic situation,
but a quiet, deep kind of experience, which is what I tend to
look for when I make images.

How do you generate ideas for the series, and how much
time per week would you estimate is dedicated to the series.

I didn’t really generate specific ideas for images I wanted
to make, I just focused on meeting as many different people
whose loved ones were deployed and let stories find me in
way. It was a lot of work. I must have hounded every public
affairs officer (PAO) within a 100-mile radius for the three months
before I began shooting, figuring out who would be deployed
and just getting permission to talk with Family Readiness
Groups.

Note: A PAO is a military personnel - Public Affairs Officer -

assigned to mediating
interactions with journalist.

Once I got permission, though, the stories flooded in.
I would go to events for families, parties, cookouts, even
deployments themselves, just to talk with people and get to
know them. People were overwhelmingly interested in sharing
their lives, showing what life looks like without someone at home.

But I can’t overstate how leg work at the beginning was
crucial in developing contacts and finding stories. I worked
those phones and my email every single day, sometimes going
up the chain of military command if I wasn’t getting a response.

I’m not a super-aggressive reporter, so it was a good experience
to fight for access.

It takes a lot of time working on this series, so how do you
balance the series with your daily work?

Honestly, I did a lot of shooting on my days off because family
events and milestones seemed to fall on those days and I never
had to reschedule with a family if I wasn’t on the schedule at
the paper. Additionally, one day a week of my regular schedule
was taken up with writing, researching or shooting. I was given
a lot of freedom by our assignments editor, Bill Kelley, to have
at least one day a week to devote to the column, but I think I
probably worked on it every single day in one way or another.
It’s funny, now that I’ve had two months of only daily assignments,
I’m feeling the void of not having a long-term project and I’m
working to start up some new stories. A project reminds you what
it’s all for when you’re elbows-deep in business portraits and
restaurant reviews. 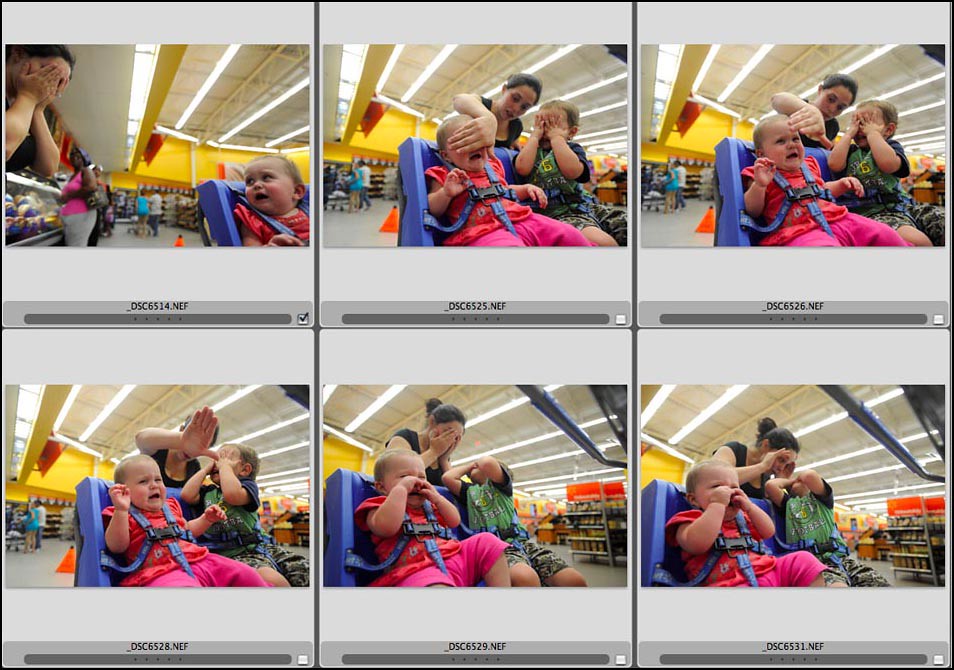 Now, to the image. Can you tell us how you met this
woman and what her story is?

Mary Brazie called me after I got her name from her Family
Readiness Group leader. We must have talked for an hour and a
half, about her relationship, how she met Tyler, how deeply she
loves him, and how she was faring without him. She told me
that cooking and shopping was the hardest thing without him,
and invited me on a trip to Walmart. I loved the idea of
photographing her in such as prosaic setting; there’s nothing
inherently visual about Walmart, but my intent with the series
was to show daily life, no matter how unromantic, and it seemed
to be the perfect place.

It'll be helpful to know how you went from this information to
generating this image. Tell us the context of the image, how
you constructed the parameters for achieving it, and the moments
leading up to it.

I don’t have much profound to say except that I followed this
woman around Walmart with her two kids who fought and
cried constantly, and I photographed them. My heart went out
to her-- two kids, all alone, missing her husband and struggling
with everyday chores like going to the grocery store. I could
hear people around her tsk-tsking that she left a crying baby in
the cart, instead of picking her up, and I wanted so much for
people to be compassionate instead of judgmental; I’m sure they
would have been kinder if they had known her story. She was
doing the best she possibly could with a cranky kid and WIC
coupons on some random weekday morning at a Walmart in
a new town. I just focused entirely on her and her experience,
on how frustrating it was for her, and I made that picture.

I decided beforehand to just shoot her, without getting permission
from Walmart. That can be such a hassle, and either you are
denied or someone follows you around for the whole time and
that changes the dynamic. I figured that if someone approached
us I would just explain the project and we would be fine. 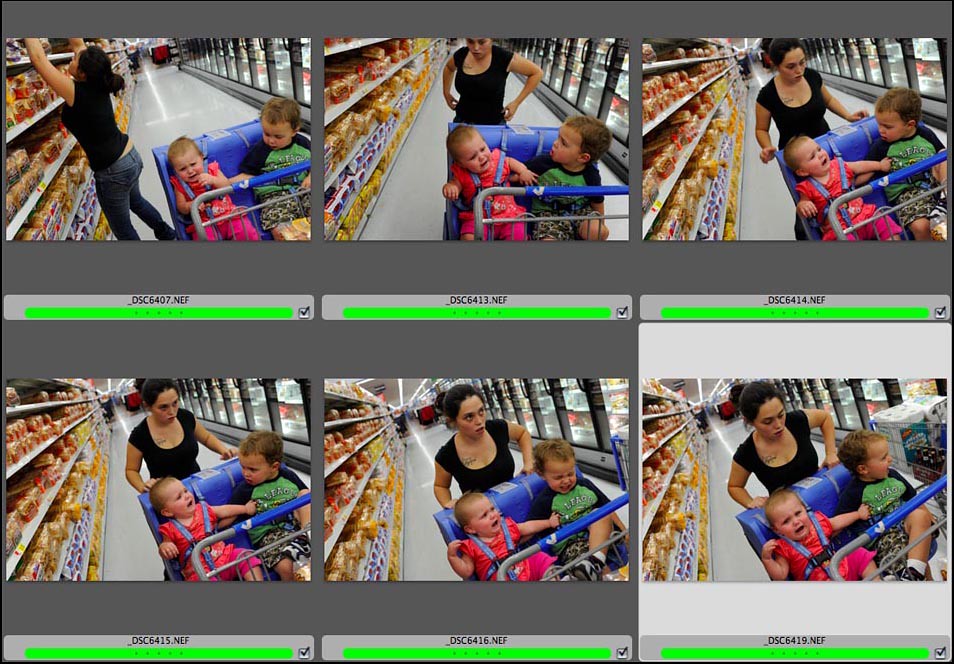 What was going on in your mind as you made the image?

I was thinking about trying to show her frustration but also giving
context as to WHY she was frustrated. I was thinking about
framing so you could tell it was a grocery store, but also so it
included the kids. When they started to fight like that, I felt like
it was all coming together, and I kept shooting, kept moving,
until I got it.

Was there any point of conflict or any objection to you
making this image? If so, how did you handle it.

It was actually the opposite; Mary completely understood my
project, why I was there and what I needed to photograph.
She acted as if I wasn’t there until we got out to the parking
lot. She wanted her husband to see what she was going through.

Do you have advice for photographers who want to work
on an ongoing photo series like this?

Find a friend who is also working on a project. I’m lucky because
of the staff at the Pilot, and also because of my neighbor Matt Eich
who pushed me to think about less obvious ways to tell the story of
deployments. Anticipate a ton of work. Photographers need to be
reporters, and the better the research and preparation, the better
the picture making opportunities. We need to stop thinking that
editors and writers will do that part of the job for us. It makes the job
more demanding, but also more focused. Putting effort into research
and conceptualizing stories before we even begin shooting is a best
practice if we consider ourselves to be journalists as well as photographers.
The only limit to what you can do at a newspaper like the Pilot (and,
actually, all the papers I’ve worked for) is what you expect of yourself.

It’s not fun to work hard at a desk and on the phone, but it paves
the way for successful storytelling. I had to be an advocate for the
presentation of the series online as well, and as uncomfortable as it
can be haggling about fonts and JavaScript, no one else will fight as
hard for your stories as you. I learned that from Preston Gannaway.

Amanda Lucier is a staff photographer with The Virginian-Pilot.
She was recently named Virginia Photographer of the Year.
You can view her work at:

Next week on The Image, Deconstructed, we'll take a look at this image
by David Holloway: 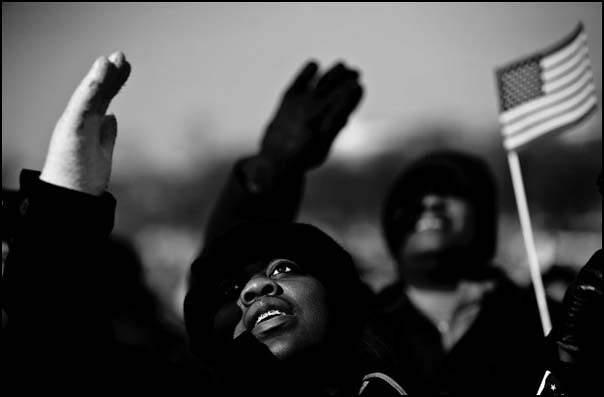