Some of us don't know the difference
between alien bees and angry birds.

Don't worry, you're not alone.

I wanted to take a break this week from deconstructing
documentary-style images to peek into the world
of photo illustrations, but with the parameters that
most of us face: 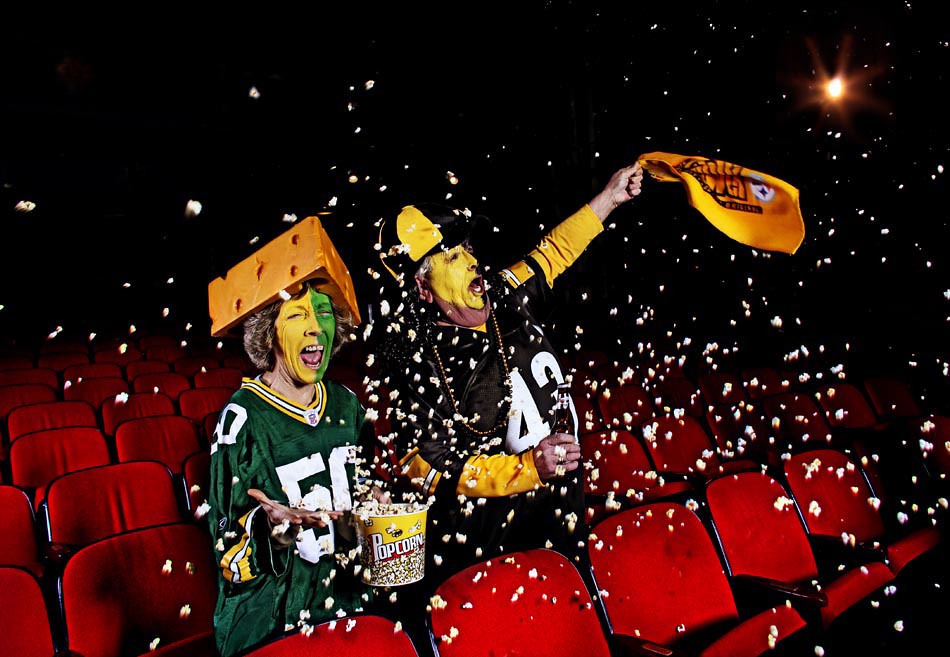 It's a challenge for many photographers. The majority
of us don't have weeks to execute photo illustrations,
nor do we have hundreds of bucks for models and props.

This week's image stems from a story about places our
readers could watch the game other than the couch -
including unusual places like a movie theater.
The catch: we had just a few days, and a small budget.

We decided to use a local theater, to avoid corporate
chains of approval. After scores of calls we found two
fans and borrowed enough props to make a run at the
illustration. The Virginian-Pilot, like many papers,
doesn't have extensive lighting setups, but we do
have two alien bees, enough to make it work.

While we waited, I asked the person helping me out
to stand in and act like he was yelling, to check out
the spacing while we waited. It's important for me to
try to have someone assist when possible. In this case
I asked one of our photo editors to come along, but if
I didn't have his help, I would have asked someone at
the theater.

Don't hesitate to ask people for help. Most people in fact,
will think you're just crazy enough to be entertaining,
and they'll be glad to help. You might just be the strangest
thing they see all week. I know I often am. 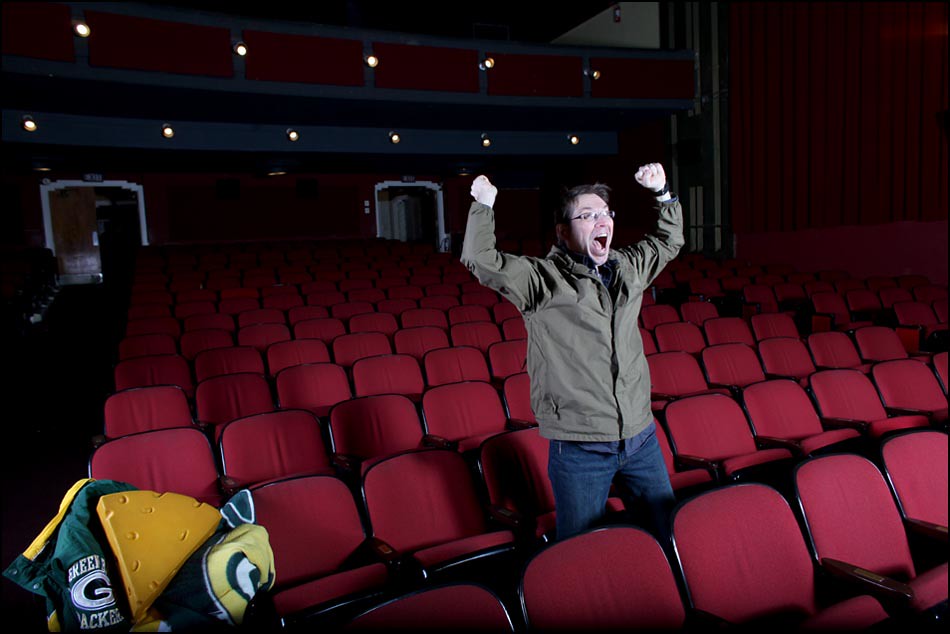 After the two put on their face makeup, we were ready
to go. I asked them to stand to make sure the positioning
was ok before we got underway. 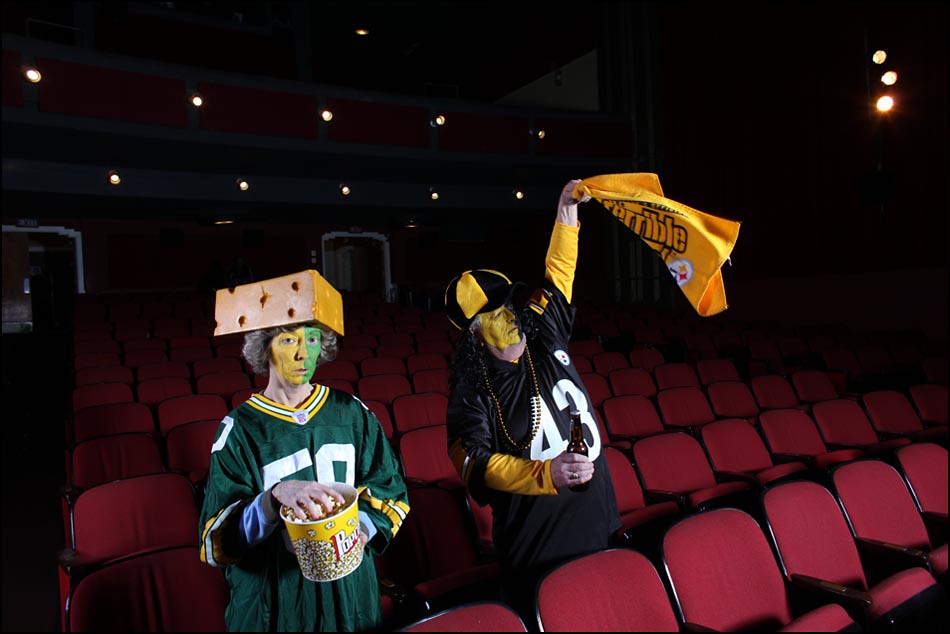 Now, the fun begins. I asked both to yell as if they were
watching a key play, and also asked the her to throw up
some popcorn to give some momentum to the picture. 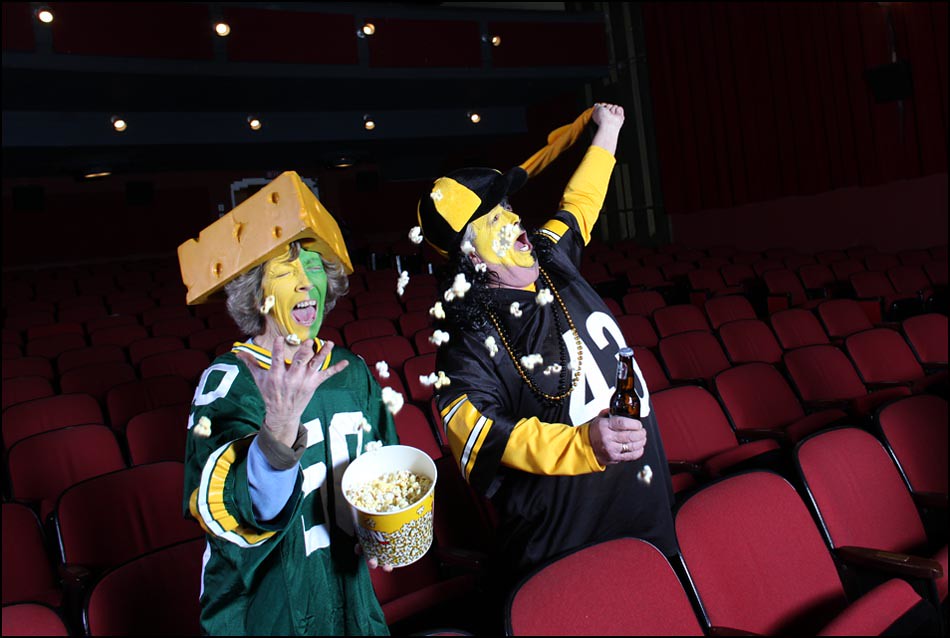 Even with the popcorn, I didn't like the stagnant nature of the
image and I thought we'd add more motion to the image.
I asked Bill, the person helping, to toss a bucket of popcorn
into the frame, to give it more motion. 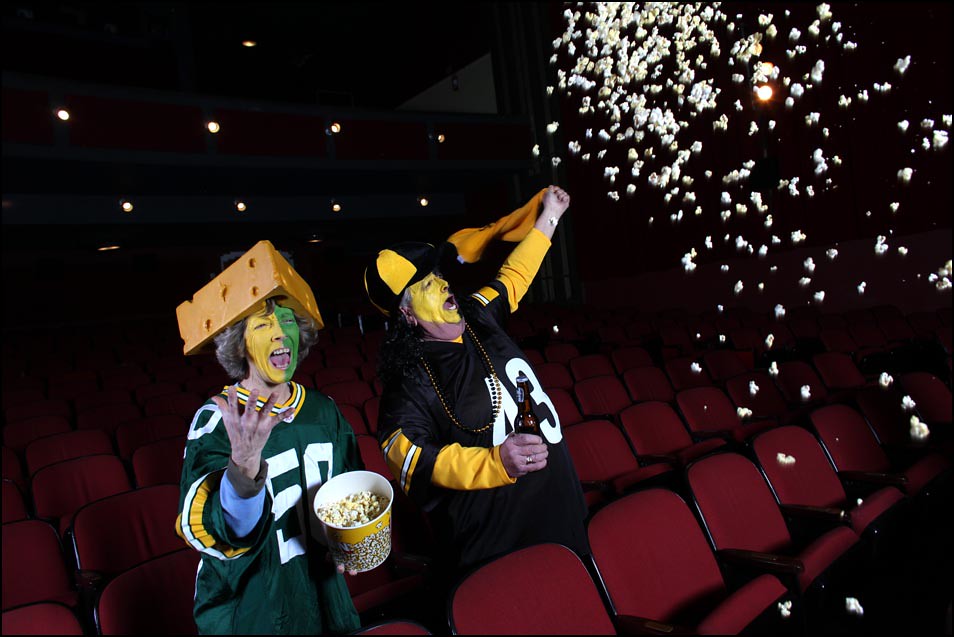 I thought it could work with some practice, so at this point
we were set and ready to go. We had them both scream and on
a five count we'd throw the popcorn into the frame. We tried
unsuccessfully numerous times before getting this. 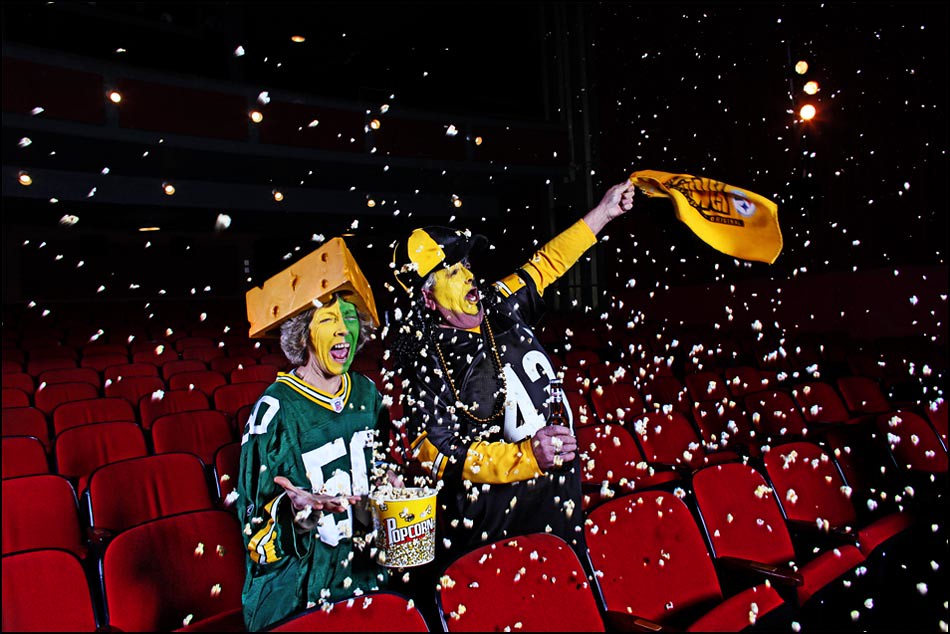 I thought there was too much popcorn, though, and I also
thought the subjects were too small in the frame. I cloned
out some of the popcorn and then used the pinch filter to
bulge them out a little, to give them a little more presence.
I also darkened the background.

On a side note, for those who want to learn photoshop, there's
a ton of podcasts out there – one I recommend especially:

“Photoshop for digital photographers,” by Michael Rather.

In the end, we spent less than 30 dollars, and just a few hours
on the shoot. I think it's a good model for daily newspaper
illustrations.

So grab a few dollars, dig into photoshop and if you get
something you really dig, email TID and we'll try to feature
it down the road.

Next week on TID, we'll take a look at this very moving image
by Logan Mock-Bunting of his mother who was dying of cancer. 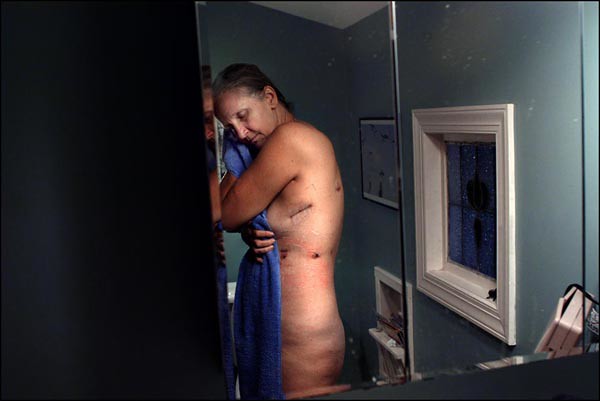